The age of the Internet has changed how we communicate, invest, shop, and work on so many levels. More of our personal data than ever is being transmitted across the network matrix, and we must understand that online privacy and security is more relevant than ever. As Morpheus said, “You can take the blue pill—the story ends, you wake up in your bed and believe whatever you want to believe. You take the red pill—you stay in Wonderland, and I show you how deep the rabbit hole goes. Remember: all I’m offering is the truth.”

News about security breaches at financial-related agencies like Equifax or the ransomware cyber-attack that has paralyzed the City of Atlanta’s computer system for the last week can no longer be viewed as a problem in someone else’s backyard. Millions of people are uninformed, and more often than not, they appease the technology giants and allow their personal information to be exploited. Unfortunately for some, it’s not until they’ve become a cybercrime victim or it becomes clear due to a national news headline that they’re contributing to the danger by remaining ignorant and a lightbulb finally goes off in their head. One of those lightbulbs is imploding and having a detrimental effect on the financial markets.

The acronym FANG represents four of the most popular technology stocks, which have generated substantial returns. Facebook ($FB), Amazon ($AMZN), Netflix ($NFLX), and Google ($GOOG) are all included within the NASDAQ Composite Index of over 3,000 stocks and in the S&P 500 index of 500 of the largest U.S. companies. Because of their high ranking within those indices, FANG stocks have a greater impact on the value of the markets overall than other companies. When they move up or down, the market tends to move in tandem.

Despite FANG’s comparison to the Dotcom boom of the late 1990s, many analysts believe an upward momentum can continue as long as more technological advancements come forward, especially in artificial intelligence (AI). While investors may have a diversified portfolio, they should also remain diligent by reading and understanding the fundamentals behind FANG stocks. The recent news about the public’s personal data being “scraped up” and disseminated for profit and/or political gain is a glaring example. Revenue from advertisers does not pay all the FANG bills. Many investors are now reassessing whether certain tech stocks are the great deal they once were, and until the negative news flow and psychology shifts or tangible safeguards are put into place, a sour note will continue to play and hurt the overall markets.

Here is what The Guardian and the millennial whistleblower did not know, or conveniently failed to mention…

Why nobody complained when Obama used Facebook (& Google) data… “In 2008, it was Google and Facebook that went to Barack Obama and met him at San Francisco airport and told him all about the power of this personal data,” he said. Yet, “the great opposition party — media — never went after the Obama campaign, never went after the progressive left as they’ve been doing this for years” – Chicago Tribune, Mar. 23

Did Facebook Break The Law To Help Obama Win In 2012?… “Obama campaign’s use of Facebook data dwarfed anything Trump did. Cambridge Analytica purchased data from an academic, who gathered it in 2014 through an app that said the data would only be used for academic purposes. There’s no question that was misleading. But by the time the general election rolled around, the Trump campaign had dumped Cambridge as a consultant, which means the data Cambridge bought had no impact on the general election. In contrast, the Obama campaign’s use of Facebook was massive, and even more intrusive… Apparently, Facebook knew its user data was being harvested en masse, but didn’t care. After the Cambridge Analytica story broke, an Obama campaign staffer, Carol Davidsen, tweeted about how “Facebook was surprised we were able to suck out the whole social graph, but they didn’t stop us once they realized what we were doing.” By “whole social graph,” she presumably meant profiles of every Facebook user in the U.S. She went on to tell the Washington Post that “We would ask permission to basically scrape your profile, and also scrape your friends, basically anything that was available to scrape. We scraped it all.” She also said that Facebook officials came to the campaign offices after the election recruiting Obama’s tech team, and that “they were very candid that they allowed us to do things they wouldn’t have allowed someone else to do because they were on our side”… Carol Davidsen’s admissions should provide a sufficient basis for opening a federal investigation of what may have been a serious violation of the law” – Investor’s Business Daily, Mar. 27

“Here is the story: Dinner held Feb. 18, 2011 at home of Kleiner Perkins partner John Doerr’s home in SillyValley. They are TOASTING use of SOCIAL MEDIA data to get OBAMA RE-ELECTED” – Jerome Corsi, Mar. 27 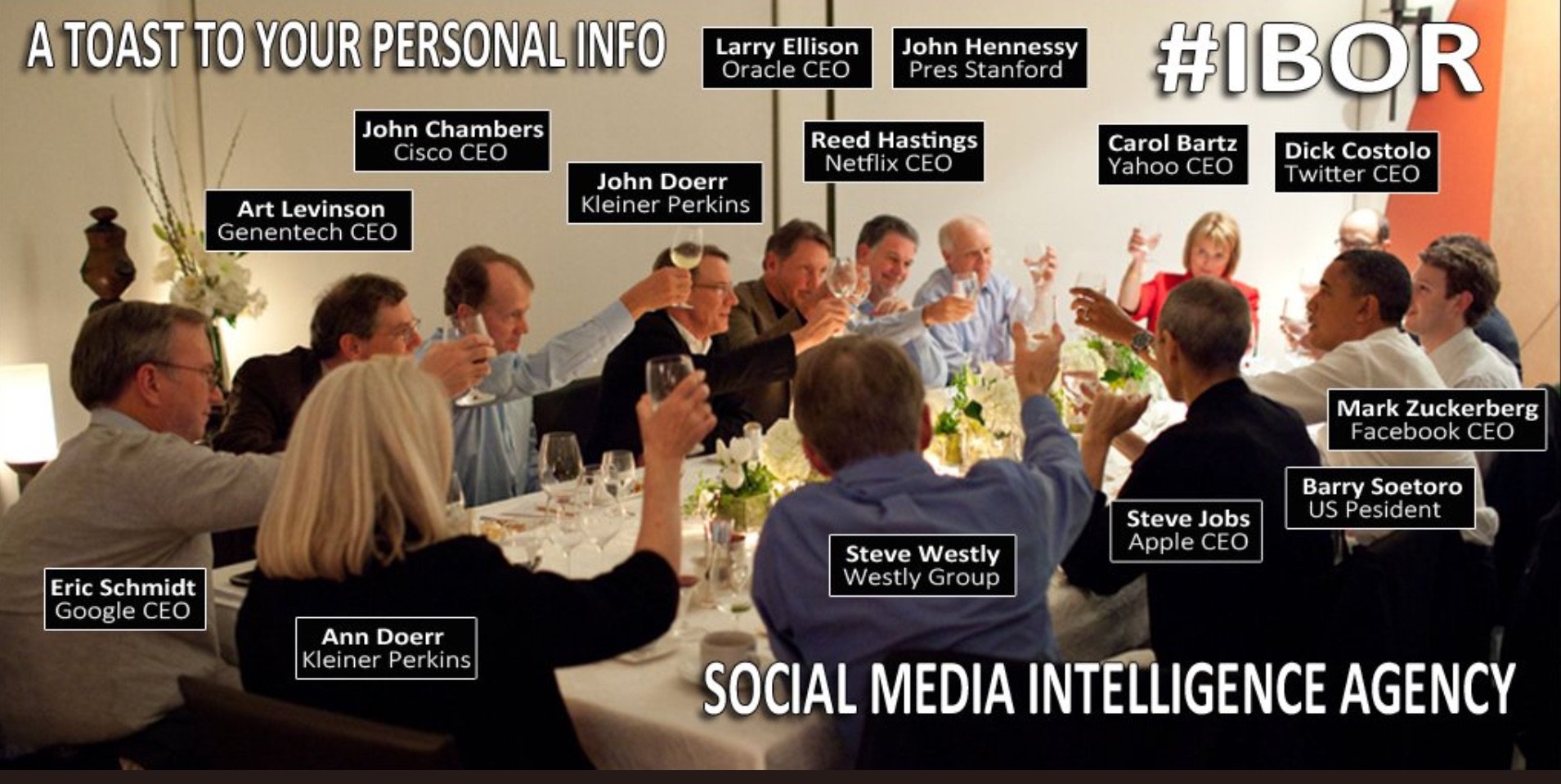 Big tech companies offer gilded safe space for Obama officials… “When former national security adviser Susan Rice was named to the Netflix board of directors Wednesday, she became at least the third high-ranking official under former President Barack Obama to receive a top post at a tech giant after leaving the White House.” – Fox News, Mar. 29

“Susan Rice, now on the NetFlix board, involved in covering up Obama involvement in illicit targeting of and use of dirty Dossier to get Donald Trump. This, in addition to her Benghazi lies (blaming video rather than al Qaeda — to help Obama reelection).” – Tom Fitton, Judicial Watch, Mar. 29

Amazon Fires Washington’s Biggest Lobbying Firm, Hires Two Podesta Group Alumni… “In their stead, Bezos hired Paul Brathwaite of Federal Street Strategies LLC and Josh Holly of Holly Strategies Inc., according to the person. In an interesting twist, both men formerly worked as outside lobbyists for Airbnb Inc. and Oracle Corp. at the Podesta Group, the lobbying firm that became infamous during the campaign when the emails of John Podesta, Hillary Clinton’s campaign chairman, were published. The firm shut down after evidence surfaced early in Robert Mueller’s Russia probe connecting Podesta’s brother Tony Podesta to a campaign organized by Paul Manafort’s old firm to lobby on behalf of President Yanukovich, according to Bloomberg.” – ZeroHedge, Mar. 30

Concerned About What Facebook Knows About You? Check Out What Google Knows… “Many users have been dropping Facebook (#DeleteFacebook), ceasing to use social media, or looking into the data that’s been collected about them. But if you think that what Facebook knows about you is scary, check out what Google knows about you. Dylan Curran, an information technology consultant, took a look at just what Google knew about him. Even with his experience as a web developer, he was shocked. “I was really like: ‘Oh, my God. This is preposterous,’” – SHTFplan, Mar. 29

If you insist on having a Facebook and/or Google account, be sure to adjust all settings available to maintain as much privacy as possible.  While perusing the matrix, here are a few free browser plug-ins to assist with cyber safety.

FANG Stocks In Freefall; Amazon Plunges On Trump Retaliation Fears… “According to the anonymous sources, Trump has allegedly talked about changing Amazon’s tax treatment because he’s worried about mom-and-pop retailers being put out of business.” – ZeroHedge, Mar. 28 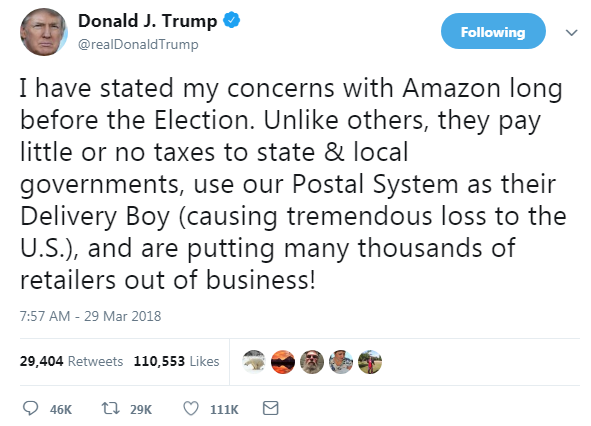 The New FANG Plus… “My unweighted index of the 10 FANG Plus stocks just broke its rising bottoms line, and equaled its Feb. 8 low. Whether a line on a chart of an index no one knows about matters, though, is an interesting question.” – Tom McClellan, McClellan Financial Publications, Mar. 28 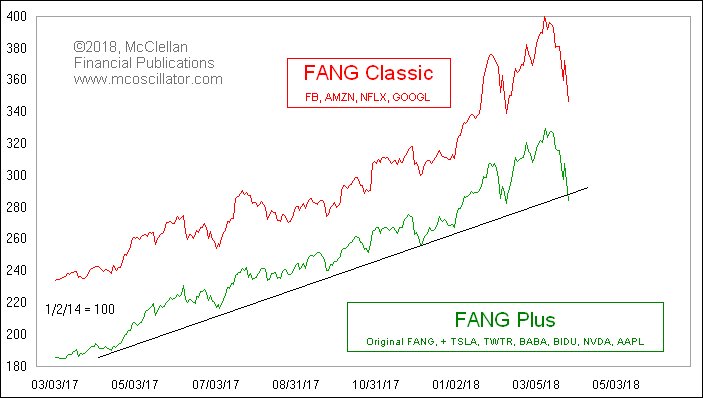 As a side note, Zuckerberg has sold large lots of his Facebook stock and exercised quite a few options lately. Here is the record going back four years, but it has picked up in frequency and size since 2018 started. 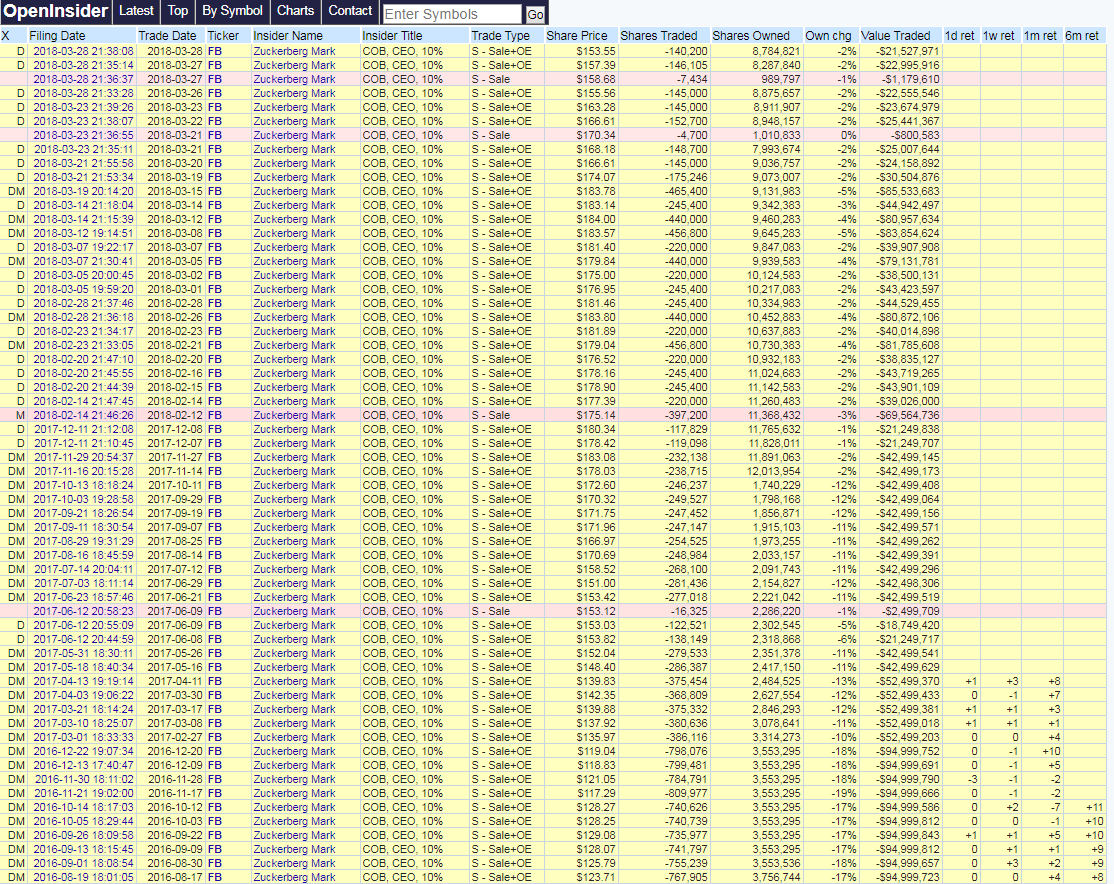 Here are the FANG stocks and NASDAQ index weekly chart to consider.  You can find my analysis on the DOW and S&P500 at my Mar. 22nd article.  As always, to view a larger version of any chart, right-click on it and choose your “view image” option. 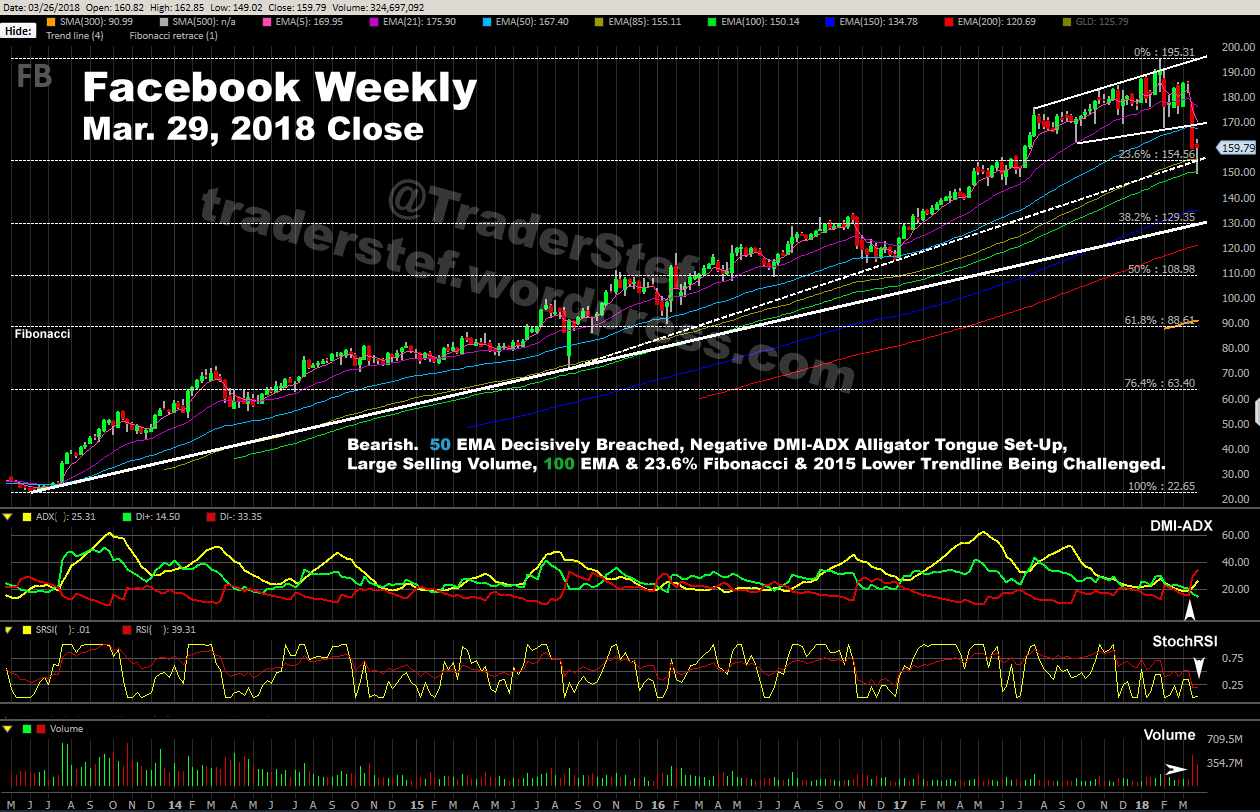 Bearish.  The 50 Exponential Moving Average (EMA) was decisively breached to the downside last week. The StochRSI is negative and the DMI-ADX is set up with a negative Alligator Tongue. Volumes are large and on the sell side. The 100 EMA, 23.6% Fibonacci, and 2015 lower trendline are being challenged. If the 100 EMA is taken out decisively, the 38.2% Fibonacci would be the next target level. 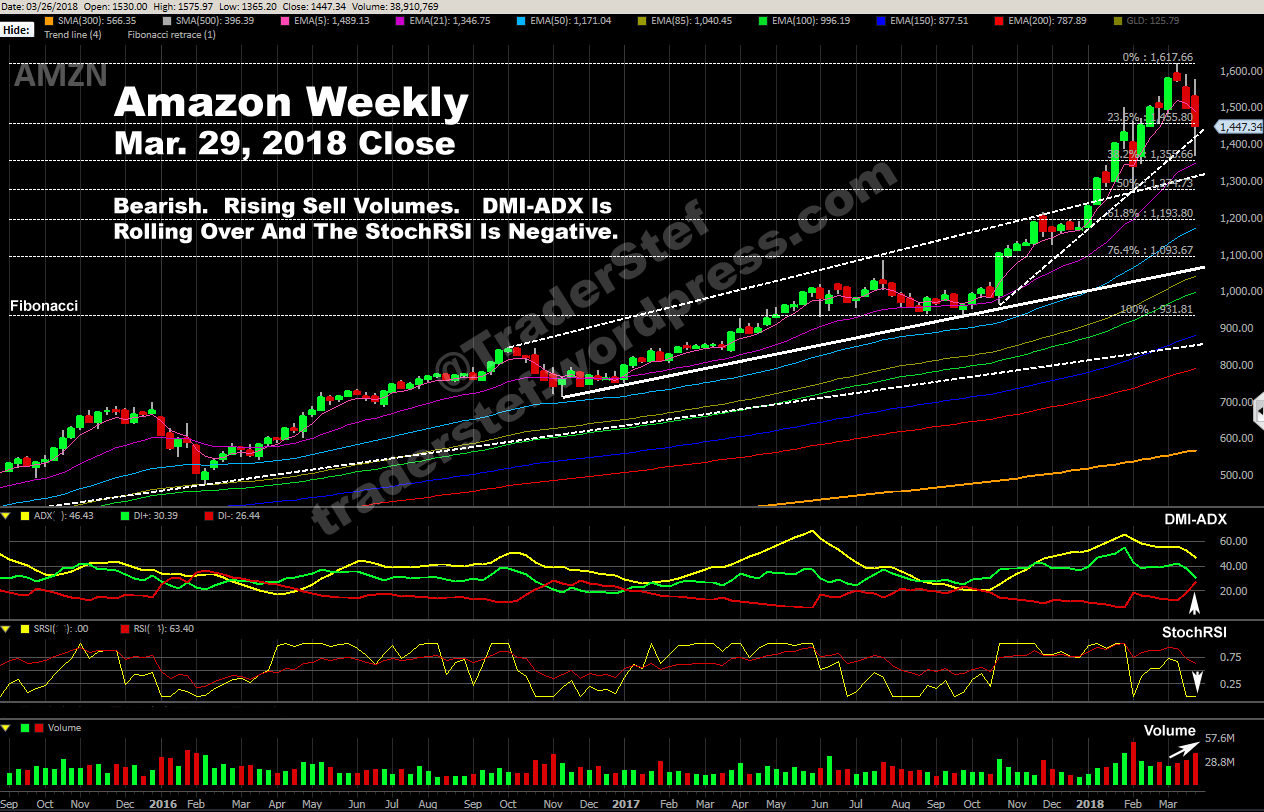 Bearish.  Volumes are rising on the sell side. DMI-ADX is rolling over, and StochRSI is negative. If the 21 EMA is taken out decisively, the next target level would be the 50 EMA and 61.8% Fibonacci. 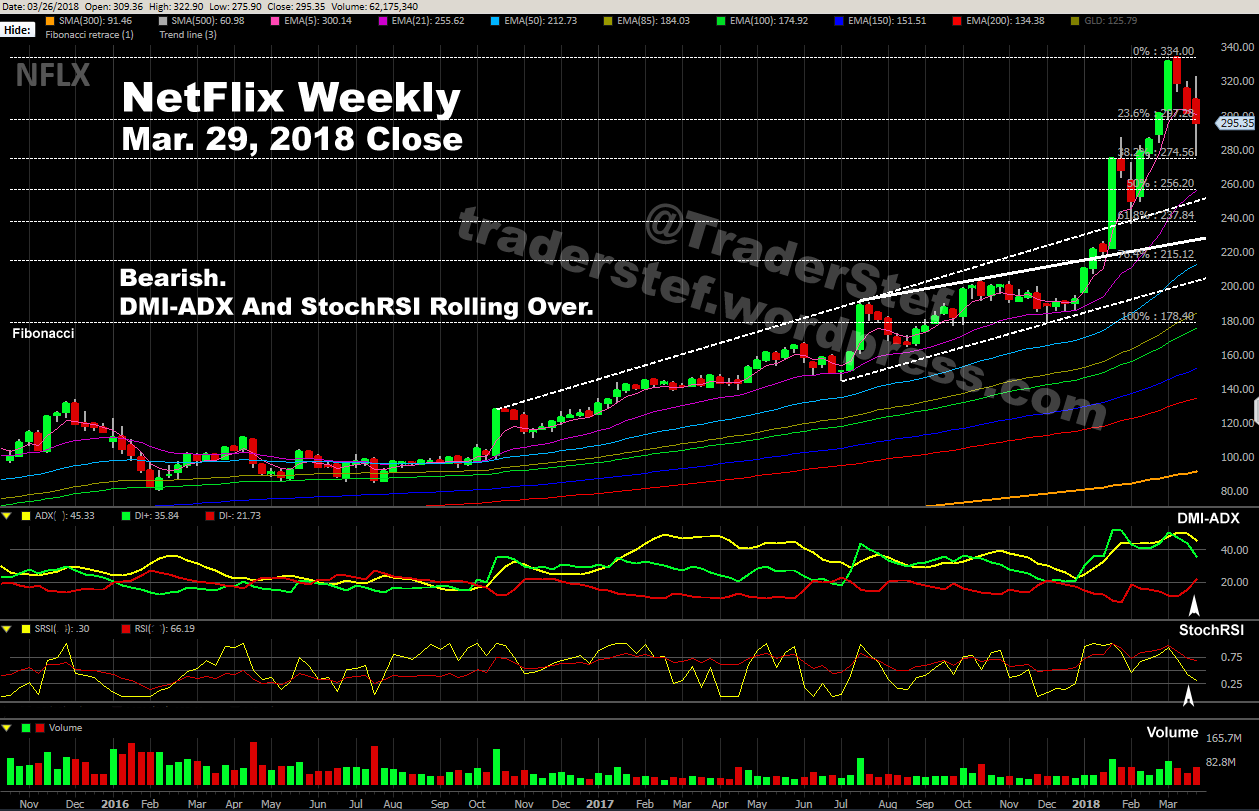 Bearish.  The DMI-ADX and StochRSI are rolling over. A retest of the 21 EMA around the 50% Fibonacci appears reasonable, as the 21 EMA has not been violated or touched since Dec. 2017. 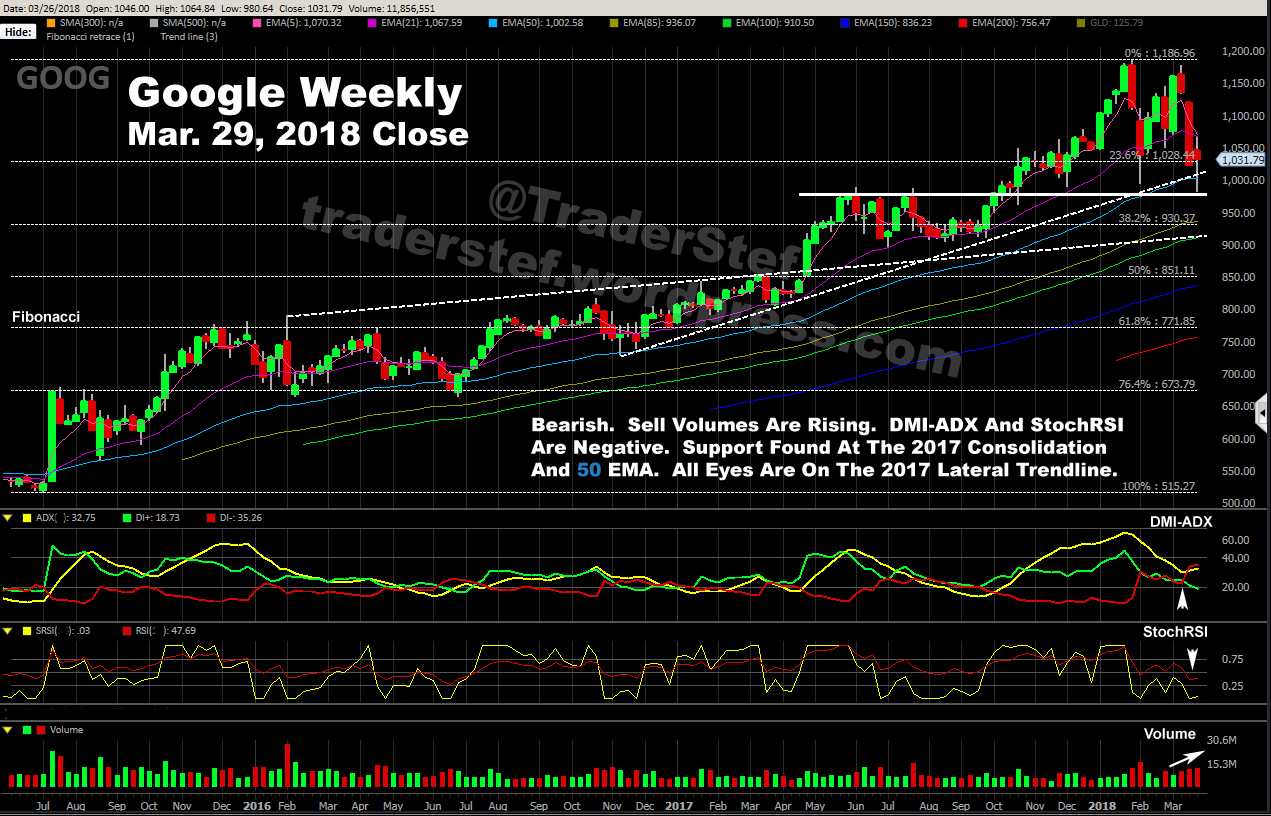 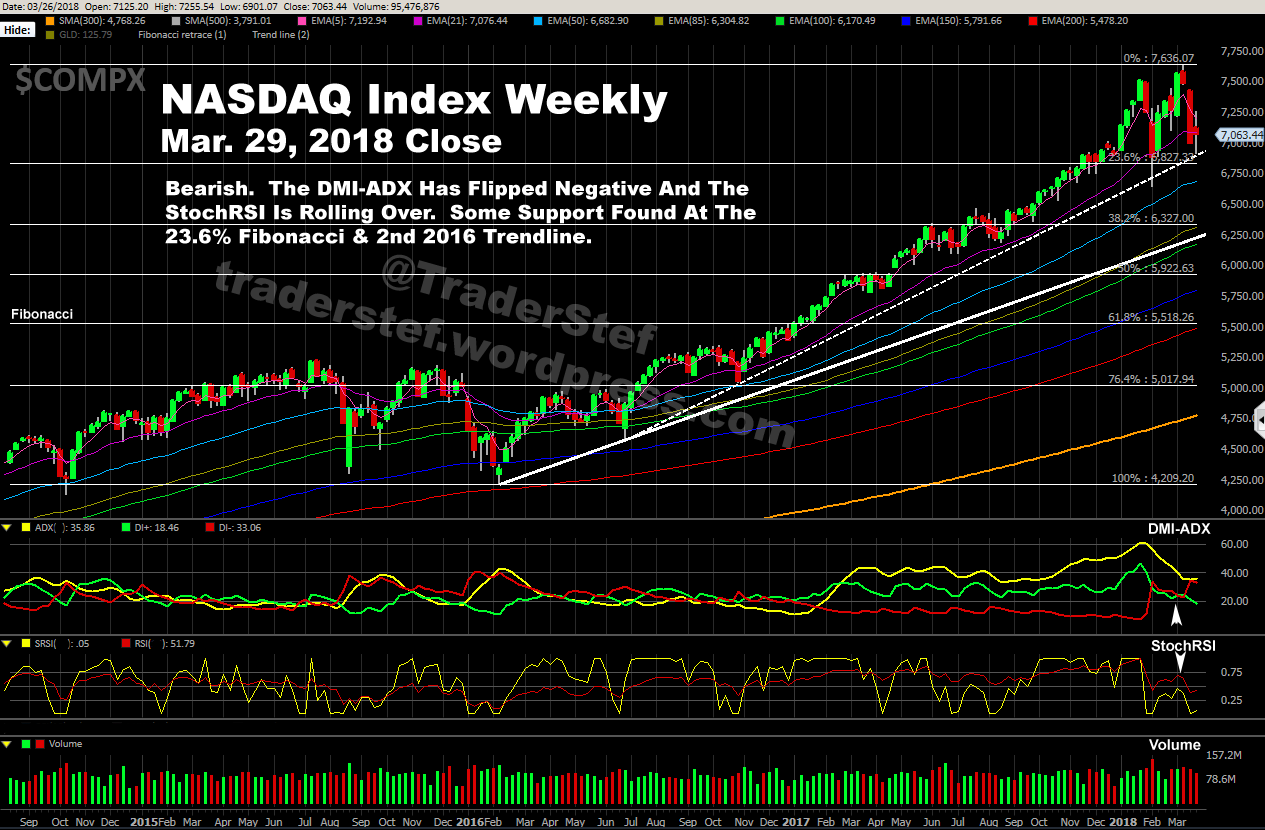