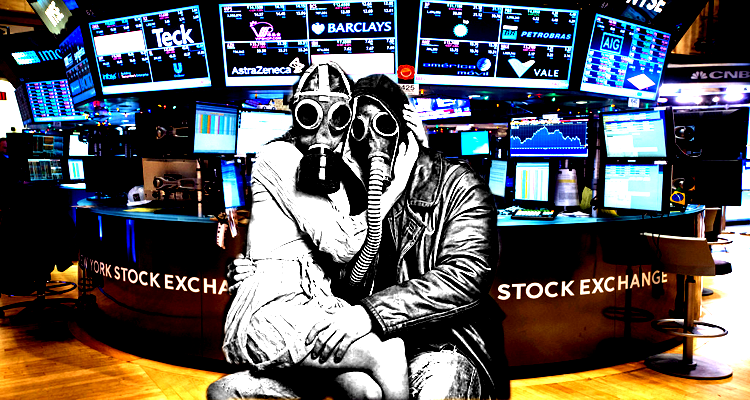 Today’s main event was a TaperCaper continuation and interest rate expectations from the FOMC meeting. News cycles on numerous topics and bombshell revelations occurring at breakneck speed (aka full-spectrum dominance agenda) make it increasingly difficult to streamline a focused analysis. This week’s concerns for the global and domestic economy revolve around debt default contagion due to China’s real estate behemoth Evergrande, a showdown on Capitol Hill to avoid a government shutdown and technical default on U.S. sovereign debt obligations, worry over a new variant mutation that shows signs of antibody-dependent enhancement (ADE, aka immune escape or breakthrough cases) as we move into the fall/winter season, the CDC, FDA, and mainstream media agenda continuing to unravel into a Nuremberg-2 situation over the pandemic’s vaccine efficacy, and huge news will drop in Arizona this weekend about their forensic audit of the 2020 election. Let’s briefly address each of those points and move on to a technical analysis of the Dow and S&P 500 charts.

Here is a bullet-point summation of today’s quotes from Jay Powell and the FOMC monetary policy statement:

The following excerpts are from my articles and the mainstream financial press that were published before the FOMC and Powell’s presser.

Another Taper Caper in a Ravenous World… “A red pilled peasantry is reaching a tipping point and demonstrably communicating that we are mad as hell and not going to take it anymore.” – TraderStef, Jul. 29 (Twitter thread)

Jerome Powell Is Confronting a World of Risks to the Fed’s Taper Timeline… “What would it take to knock the U.S. recovery off course and send Federal Reserve policy makers back to the drawing board? Not much — and there are plenty of candidates to deliver the blow. From one direction: U.S. debt-ceiling deadlock, China property slump or simply an extension of Covid caution could hit growth and jobs — taking the Fed’s proposed taper of bond purchases off autopilot, and pushing its first interest-rate increase back to 2024 or later. From the other: Sustained supply-chain snarl-ups could keep inflation stubbornly high and unmoor inflation expectations — forcing an acceleration of the taper, and an early rate liftoff in 2022.” – Bloomberg, Sep. 22

Chanos Warns Evergrande Crisis Could Be Worse Than Lehman For China… “One of the world’s most well-known short-sellers, Jim Chanos, told FT the Evergrande crisis is just a symptom of the property-driven growth model coming to an end and could be ‘far worse’ than a ‘Lehman-type’ blowup for China.” – ZH, Sep. 22

U.S.A. Technical Debt Default and 3Q21 GDP on Tap – Get FIRE’d… “Have you been working on your financial independence and retire early strategy so you can live from a position of fk you?” – TraderStef, Sep. 18 (Twitter thread)

Democrats Pursue Doomed Debt Move, With Emergency Option in Hand… “While multiple scenarios are possible, close observers of fiscal negotiations have penciled in the Democrats eventually opting to remove the debt limit from the stopgap spending bill. That would ensure the bipartisan passage of the government funding measure, with Democrats raising the debt ceiling using a fast-track process that bypasses the filibuster, removing the need for GOP votes. – Bloomberg, Sep. 22

The Jabs Do Not Make You Free… “The problem that nobody wants to talk about is the Internet of Things is joining the Internet of Bodies transhumanism agenda, and it’s Borg-like.” – TraderStef, Sep. 8 (#InformedConsent2 Twitter thread)

Be aware of a new variant known as R.1 that ripped through fully vaccinated residents at a Kentucky nursing home. It is gaining a foothold in Japan and the U.S.A. and shares mutations E484K and D614G (Italian strain spring ’20) in the spike protein, giving it “increased resistance” to jabs.

A new variant of COVID-19 with deadly mutations that give it “increased resistance to antibodies” was discovered in a Kentucky nursing home… “R.1 originated in Japan and has now racked up over 10,000 entries in the GISAID SARS-CoV-2 database, which researchers use to record genomic data… it features several unique mutations that could give it advantages in ‘transmission, replication, and immune suppression.’ One of these, a mutation termed E484K located in the spike protein of the virus, gives it an ‘increased resistance’ to antibodies generated by the vaccine. R.1 shares an additional mutation, the D614G, with all other variants that have overtaken the original strain, which increases its infectiousness.” – The Sun, Sep. 21

Let’s move on to a technical analysis of the Dow and S&P 500 charts. To view a larger version of either chart, right-click on it and choose the “view image” option. 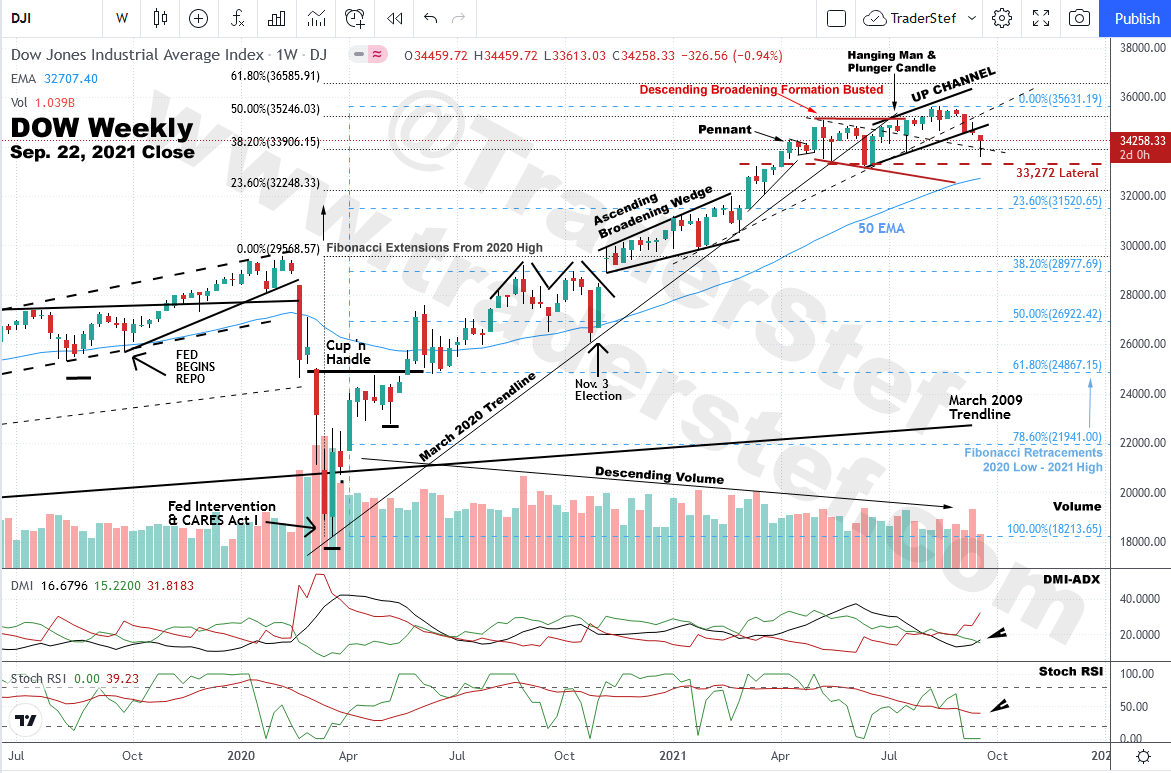 “The trend is leaning towards bearish because of pandemic fears reemerging, and the price action has proven to have a volatile habit. Caution is warranted with a visit to the 50 EMA on the table.”

After trending in an Up Channel since the mid-June 2021 Tweezer Bottom, the Dow printed a high of 35,631 during the week of Aug. 16 and trended to a low this week at 33,613 following the Evergrande contagion panic. The price action retraced to a 34,258 close today despite the FOMC’s hawkish but cautious tone. There are no more lower trendlines to breach since the Mar. 2020 low and the price has not closed back above the Up Channel’s lower trendline that was breached last week. There are two days left before this week’s candlestick is finalized.

The DMI-ADX has crossed to a negative trend and an Alligator Tongue set up is just beginning to take shape. The StochRSI is oversold, but both indicators have not bottomed out together since the Mar./Apr. 2020 lows. The buy and sell volume continue on a downward trend since the Mar. 2020 low, and that divergence along with 100% upside in price is indicative of a potential correction sooner than later. The sell volume was strong last week, and it’s possible that this week’s volume will match it by Friday’s close.

The first level of strong support is the 33,272 lateral drawn back to the mid-June Tweezer Bottom, and then the 50 Exponential Moving Average (EMA) rising up from below. Use the Fibonaccis as a guide if the price breaks down lower. Caution is warranted in this scalping environment, and layering large long-term positions is not recommended at this time. 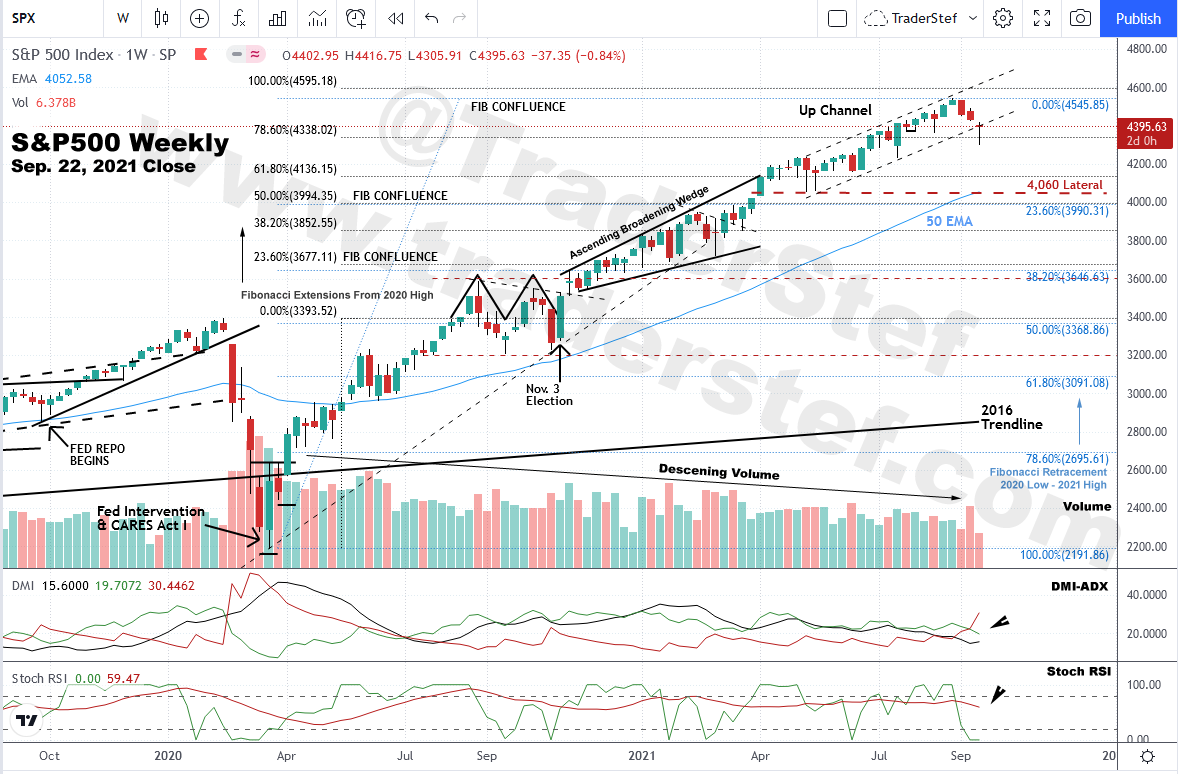 “The S&P 500 is nearly identical but has a different topping pattern that is less bearish than the Dow. Don’t be fooled into complacency because it has the potential to break down quickly… The volume has been in a downtrend since the Mar. 2020 low, the DMI-ADX is threatening a cross to a negative trend, and the StochRSI is rolling over. Caution is warranted with a potential visit to the 50 EMA.”

After trending in an Up Channel to a high of 4545.85 during the week of Aug. 30, the SPX plunged for two weeks before printing a low of 4305.91 yesterday on Evergrande contagion fear. The price action retraced to a close of 4395.63 today despite the FOMC’s hawkish but cautious tone. The weekly candle has not closed back above the Up Channel’s lower trendline, with two days left before this week’s candlestick is finalized.

Volume continues on a downward trend since the Mar. 2020 low, and the divergence with the 100%+ upside in price says a correction is in the oven. The DMI-ADX crossed over into a negative trend for the first time since Jul. 2020 and is threatening an Alligator Tongue setup. The StochRSI is oversold, but both indicators have not bottomed out together since the Mar./Apr. 2020 lows. The next level of strong support is the 4,060 lateral drawn back to the mid-May lows, the 50 EMA, and the Fibonacci confluence at 3,990/3,994.

As noted in the previous analyses, don’t be fooled into complacency because news cycle volatility is unprecedented and price action can break up or down quickly. Caution is warranted in this scalping environment, and layering large long-term positions is not recommended at this time..