Conventional wisdom dictates that as one financial sector becomes flooded with willing buyers, savvy investors should look towards an out-of-favor asset. The reasoning is simple and perhaps painfully obvious: crowded markets are ripe for a massive downturn as the smart money and institutional players have already sealed their gains. Which is why several retail investors are waiting in the sidelines, unwilling to be suckered into a bet that could potentially go awry, circa the tech-wreck of 2000 and the meltdown of 2008. Given the sinusoidal nature of shifting waves of sentiment, many are considering the emerging markets as an opportunity to grow their money. But is this a reasonable place to invest?

To explore the implications of this question further, a comparative framework should be established. Using the iShares MSCI Emerging Markets (NYSE : EEM) as a target group and the SPDR S&P 500 ETF (NYSE : SPY) as a control, we can better determine the trajectory of performance relative to a baseline. We will also analyze the two funds on a non-linear logarithmic scale as opposed to the traditional nominal price scale.

Contrary to colloquial opinion permeating from internet chat rooms or on social media platforms, the purpose of logarithmic scales is not limited to analyses that cover a wide-ranging data set. While the aesthetic properties of logarithms make it the most appropriate choice for multi-year technical charts that cover high-velocity assets such as gold, the reason why is that it measures magnitude. Unlike traditional charts that record the daily closing price (assuming a daily chart), logarithmic charts build off on previous price data as a multiple. It is therefore easier to gauge momentum and has the potential of filtering out some of the white noise that can “taint” market data, such as the effects of monetary policy (inflation/deflation).

The SPY, which tracks the performance of the S&P 500 index, has been on a consistent uptrend since the summer of 2011, punctuated by minor corrections. A second-order polynomial trend line, taken from April 2003 to the present time (February 27, 2015) confirms the generally positive trajectory. While it is difficult to imagine that the broader equities market will continue its impressive run, there is no indication from magnitude alone that it will collapse anytime soon. Compare that to the EEM, which represents a basket of mid to large capitalization emerging market equities. Since peaking in 2007, the valuation, at least from a logarithmic scale, has yet to be breached. Even worse, top-line momentum, or efforts by bullish investors to push prices past historical resistances, has yielded lower returns. The second-order polynomial trend line suggests that the magnitude of the market is leveling off, with the next move likely to be towards the downside unless the fundamentals sway investors to move in the opposite direction. However this plays out, it is an important reminder that overbought conditions in one sector does not necessarily mean that other sectors are oversold. The markets can remain irrational longer than an investor can remain solvent and knee-jerk reactions based on expected cyclical relationships can potentially render significant financial harm. 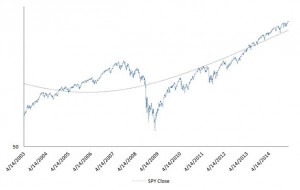 Conventional wisdom dictates that as one financial sector becomes flooded with willing buyers, savvy investors should look towards an out-of-favor asset.