FedSpeak Jolts the Dow and S&P 500 Upward – The Charts Say?

The great TaperCaper continues, with a little Goldilocks tossed in for good measure.  For a primer on what happened toward the end of the week, watch St. Louis Federal Reserve President James Bullard have a fantasy chat with CNBC’s Squawk Box crew on Thursday morning about rising interest rates, inflation, and his forecasts for economic growth.

On Friday, more Fed folks bombed the news feeds, and trading algorithms had a field day or a senior moment, depending on how you digest the nuttiness.  Bond yields plummeted and the markets rallied.  Happy days are back again.  And what may be the most watched financial congressional testimony in history will be the latest and greatest Fed Chair, Jay Powell, this coming Tuesday.  If he comes across as being overly hawkish, the markets could reverse to the downside without mercy.  So keep that in mind while considering the Dow and S&P 500 ETF charts following the few must-read articles below.  But first, take in this bullet point summary, spoken by the Fed’s Powell, Dudley, Rosengren, Mester, and Williams, which juiced the markets on Friday.

About that margin debt problem…

Margin Debt and the Market… “The NYSE has suspended their NYSE Member Firm margin data as of December 2017. We have replaced our Margin Debt data with FINRA data, which includes data for all firms, not just NYSE member firms.” – Advisor Perspectives, Feb. 14 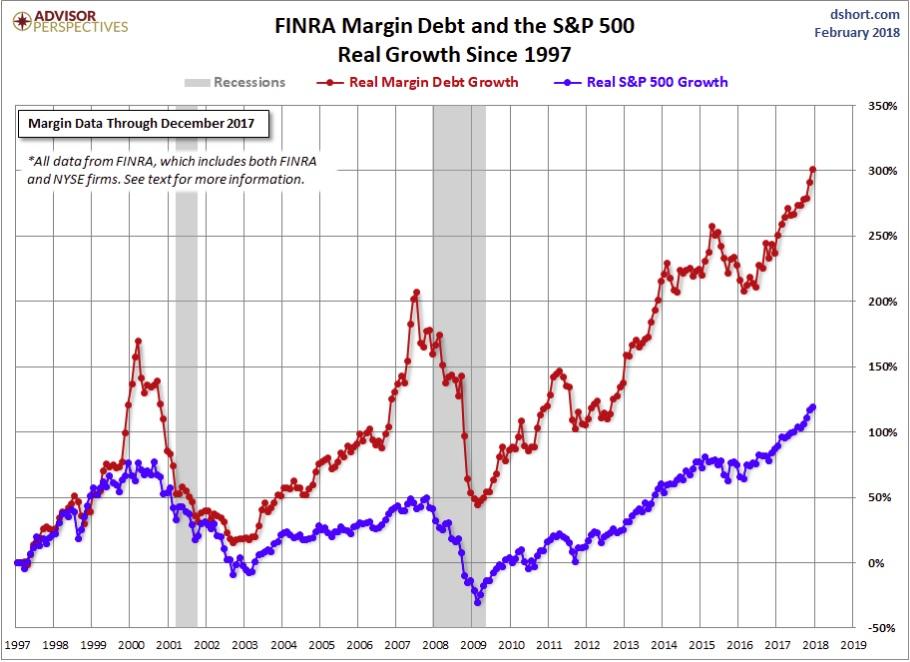 Investors’ Zeal to Buy Stocks With Debt Leaves Markets Vulnerable… “Investors borrowing record sums to bet on stocks exacerbated this month’s selloff, after they were hit with calls to reduce those obligations and forced to sell shares to raise cash. If that debt, known as margin loans, continues to rise at the current pace, analysts warn that big selloffs and sudden bouts of volatility in the stock market could become more commonplace. Retail and institutional investors have borrowed a record $642.8 billion against their portfolios, according to the Financial Industry Regulatory Authority, as they try to pocket bigger gains by ramping up their exposure to stocks.” – WSJ, Feb. 25 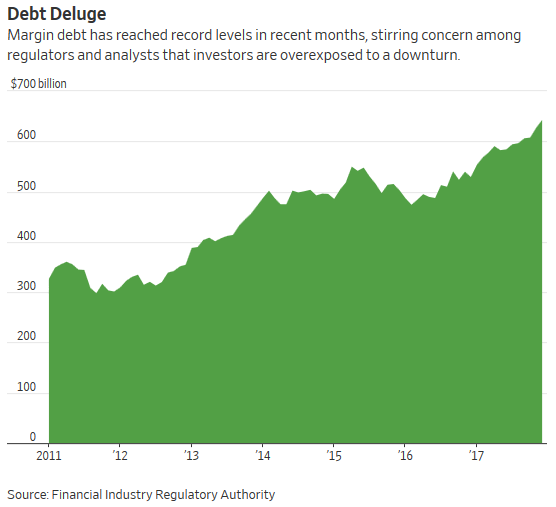 Nippon Life CIO “Goldilocks” scenario near end, plans to sell stocks into rally… “Global shares were rocked by a sell-off earlier this month, after data stoked fears that inflation may accelerate, shaking the prevailing view that U.S. borrowing costs will remain contained. Although global shares have bounced back in the past week or so, Nippon Life expects risk assets could be pummeled again. Market expectations of a ‘Goldilocks’ scenario, one that is not too hot nor too cold, are based on the assumption of three ‘moderations’ — moderate economic growth, moderate inflation and moderate rise in asset prices.” – Reuters, Feb. 22

Houston, we have a problem.  The last sentence pasted from the following article is the money quote, which puts the corporate buybacks bubble into perspective.  If interest rates continue to rise, SHTF will be so stinky that markets will tank while gorging on volatility quicker that you can say “cheese.” 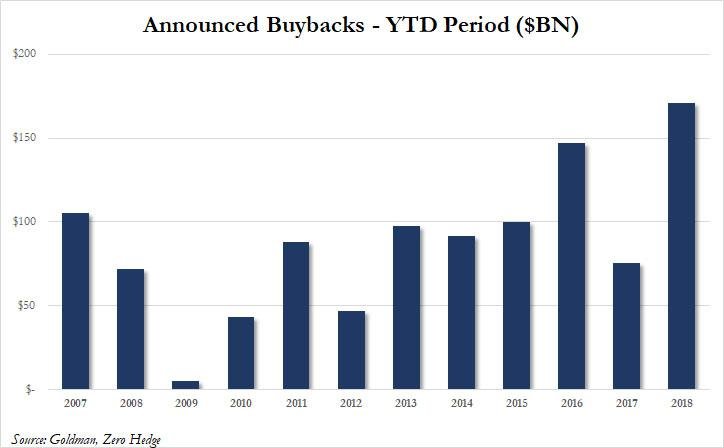 And, according to Goldman’s revised forecast of corporate cash use, the buyback tsunami is about to be truly unleashed this year.  Here a quick reminder:  corporations – via share buybacks – have been the main buyers of shares in the U.S. since 2009. Non-financial corporates have repurchased a net US$3.3 trillion worth of US equities since 2009, according to the Federal Reserve’s flow of funds data. This tremendous demand for equities from largely price-indescriminate corporations has had a knock-on effect of crushing equity volatility: As Christopher Cole, the well-known Artemis hedge fund manager  who has been rightly warning that volatility has been artificially and dangerously depressed for a while, warned “Stock buybacks are in effect creating low volatility,” adding that “Share buybacks are like a giant synthetic short-volatility position.”  Recently, even Bloomberg hinted  at the dangers posed by buybacks, points out that “companies over the past decade or so have significantly increased buybacks to the point where they are now collectively the largest single buyer of stocks. Some have called the market self-cannibalizing. Equity shrink is the nicer way to say that.” As a further reminder, and as we first showed over two years ago, the explanation for the unprecedented increase in US corporate debt since the financial crisis can largely be explained with one word: buybacks. In fact, as SocGen showed, all net debt issuance in the 21st century has been used to pay for stock buybacks… The problem, as has increasingly been the case, comes when companies fund buybacks by taking on debt rather than with the cash generated by their operations, which has been almost exclusively the case.” – ZeroHedge, Feb. 25

As always, to view a larger version of any chart, right-click on it and choose your “view image” option.

Since Feb. 16th, as seen on this screenshot of the S&P 500 15-minute chart taken before the Feb. 23rd open, markets were rallying at market opens, then sold off vigorously toward the end of each day.  Pure profit taking.  It was a 360-degree change in pattern that took place vs. the pivot rally off the recent correction low in the market. What began to look like a retest of the all-time highs rally play, took on the appearance of a dead cat bounce for 4 days when smart money began taking money off the table, who may have missed that opportunity during the market swoon that began in earnest on Feb. 2nd. 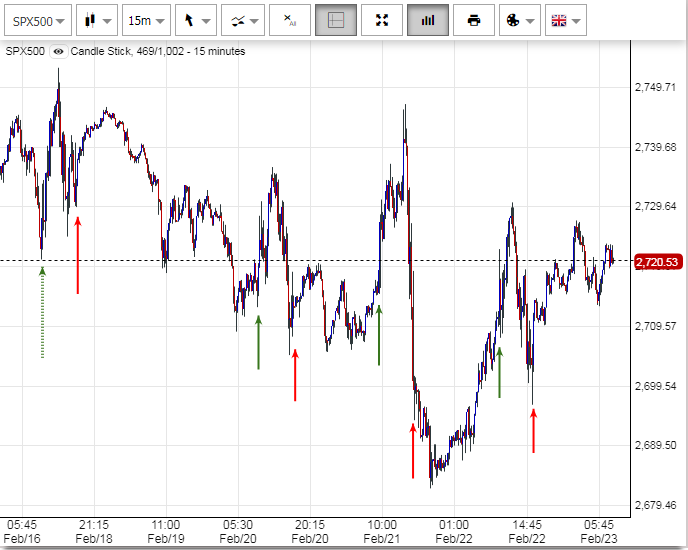 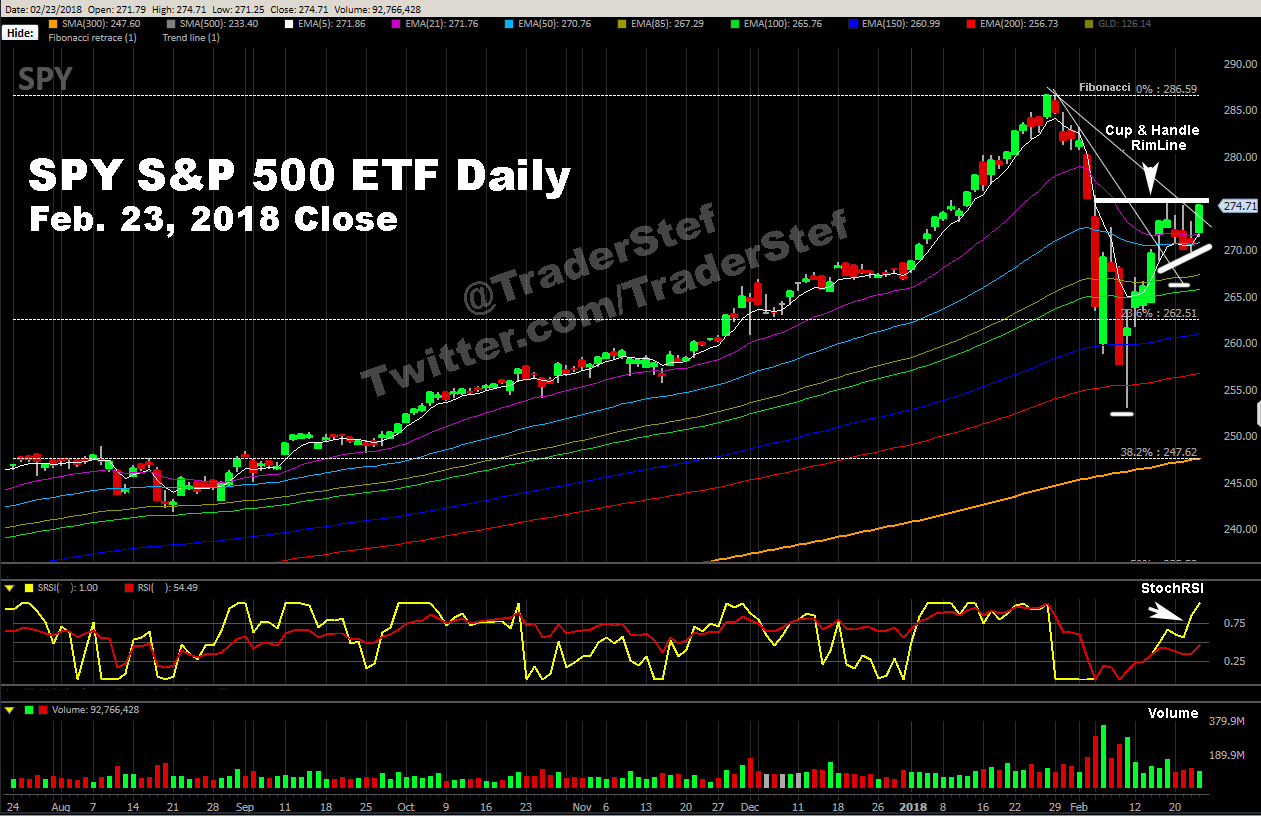 Two near-term bullish patterns have evolved since the low put in during the recent market correction: a Cup & Handle and Ascending Triangle within the handle.  The price has retraced back above all the Exponential Moving Averages (EMA) and back above the 23.6% Fibonacci, following the pivot off the 200 EMA. Large buying volume came back into the market, relative to the overall falling volume pattern seen since this multi-year bull run began.  The StochRSI has spiked upward into positive territory.  There is high potential for a retest of the all-time high.  Keep your eyes on the veracity of price action if the Rim-Line of the Cup & Handle is taken out.  The downside comes if any news breaks that’s perceived as bearish in the near-term or Jay Powell drops a few hawkish headlines at his first congressional testimony on Tuesday.  No matter how it plays out over the next few days, any retest attempt could fall short and/or morph into a bearish Double Top.  Stay on your toes if you trade this poker hand.

Analysis on the $DIA is identical to the $SPY.  The only exception is the DIA pivoted off the 150 EMA instead of the 200.