The Hemp Money Bomb is Hiding in Smoke-Filled Cannabis Rooms

Marijuana tax profits skimmed from potheads and medically-necessary folk is a MSM focus.  From the #1 most-cited market research company for the industry…

“Conservative estimates show more than $1 billion dollars in wholesale, excise, and cannabis-specific sales taxes were taken into state treasuries during 2016. That number is forecast to grow to just over $1.4 billion in 2017 and then to nearly $2.8 billion by 2021. With additional state and local general sales taxes, that 2021 figure could be between $4 billion and $4.7 billion.” – Arcview, Jan. 2018 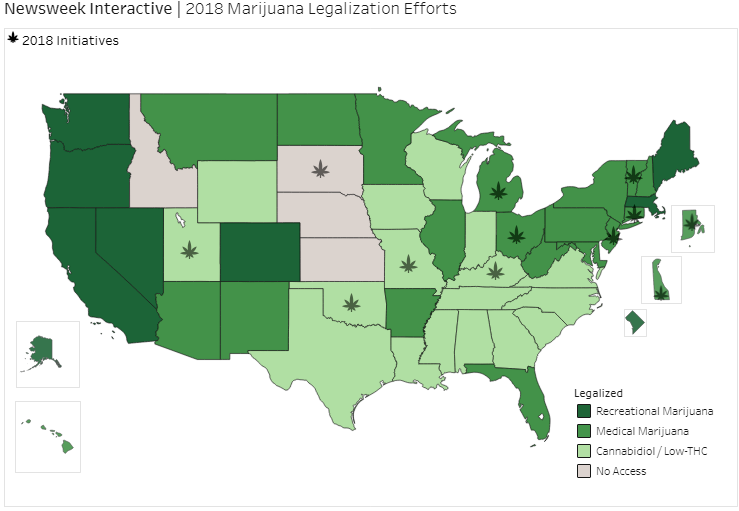 An approaching long-term, under-the-radar money bomb with far less concern about ongoing legal contention (existing concerns primarily due to ignorance) and greater global demand potential for its derived products is Hemp. What is Hemp?  Are hemp and marijuana the same? Short answer: No. They are just both part of the cannabis family.  Like lapels or pleats, they’re small but highly significant differences.  The production for industrial use and health applications are coming back to the United States in a big way.  For those savvy enough to see it coming, opportunity awaits you!

“There is another cannabis-based product that could be bigger than legal weed, however. Because of its versatility and positive environmental impact, in only a few short years, the hemp industry might just become larger than recreational or medical cannabis.” – PotGuide.com, May 2017

A few interesting factoids about Hemp:

50,000 Ways That Hemp Can Literally Save The World… “Did you know that the very first marijuana law in the United States was one ordering farmers to grow hemp? Meaning, it was illegal to NOT grow it; farmers were REQUIRED to grow it. Popular Mechanics magazine, in their February, 1938 issue, said that ‘Hemp is the standard fiber of the world. It has great tensile strength and durability. It is used to produce more than 5,000 textile products, ranging from rope to fine laces, and the woody ’hurds’ remaining after the fiber has been removed contain more than 77% cellulose, and can be used to produce more than 25,000 products, ranging from dynamite to Cellophane.” – MiraclesForMe 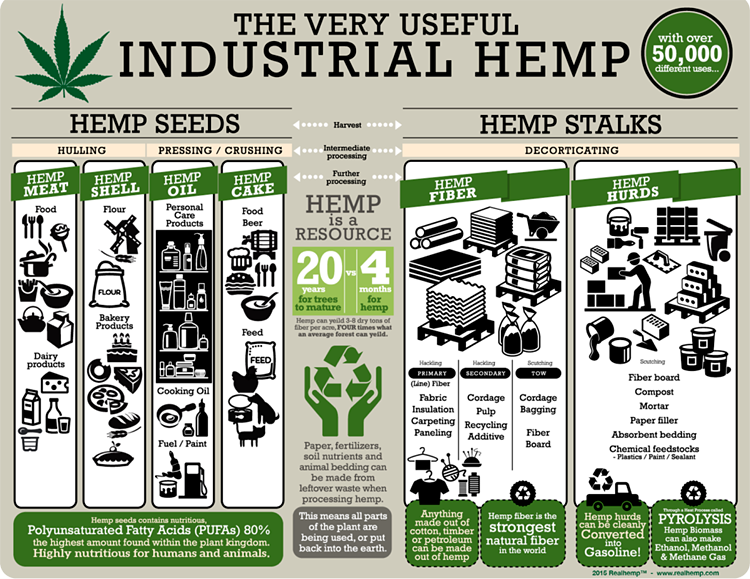 Our Mission is to create ‘Homes for Everyone’… “We utilize one of Nature’s most versatile fibers to create strong, energy efficient and beautiful structures.  Our modular cottages will set a new standard for housing, and will demonstrate that it is possible to live in comfortable, ‘right sized’ homes which are healthy for both the people who live in them and for the planet.” – Hempcrete Natural Building Ltd. 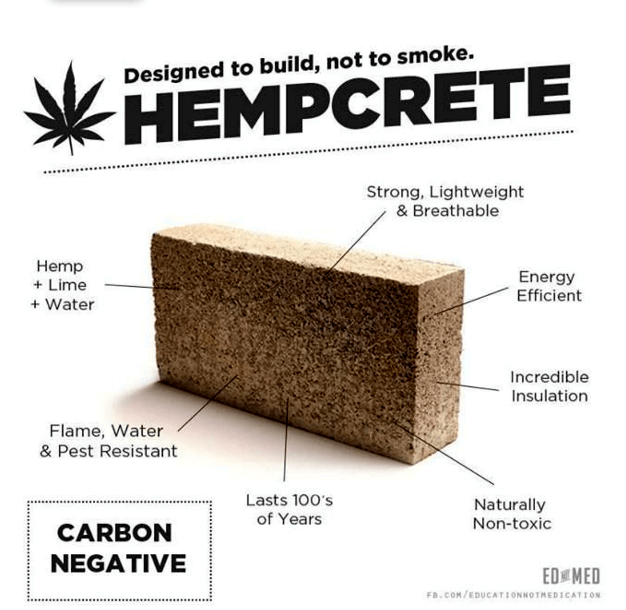 Hemp farms are popping up like weeds.  Here are two recent news items of note this year…

Canadian firm unveils plans for large hemp farm in northern Maine… “A Canadian company plans to launch a large, industrial hemp operation in northern Maine this year in the latest sign of burgeoning interest in the versatile yet tightly regulated crop. Future Farm Technologies recently purchased 120 acres in the Aroostook County town of Amity and plans to lease another 100 acres for an operation that would dwarf all of Maine’s current licensed hemp farms. Future Farm also reportedly secured a lease option on an additional 1,000 acres in Amity, a town of fewer than 250 residents located south of Houlton along the Maine-New Brunswick border. Maine began issuing hemp grower licenses in 2016 amid a national push to expand legal cultivation of a crop used in rope, clothing, skin care and other products.” – PressHerald, Jan. 2018

Hemp production coming to Carlisle County in 2018… “Hemp and big business are on their way to Carlisle County in Kentucky. Megan Koch owns a local business in Bardwell called Rusted Roots. She saw the potential of hemp and decided to invest. ‘Building materials, or clothing or, basically, the possibilities are endless,’ Koch said. The fields are empty now, but in the coming months, neighbors will see the return of a crop that was first planted in Kentucky in 1775. Kings Royal Biotech out of San Diego, California is a company partnering with an unnamed Chinese company to put a hemp processing facility in west Kentucky.” – WPSlocal6, Jan. 2018

With every new industry or investment class, opportunities will mature… 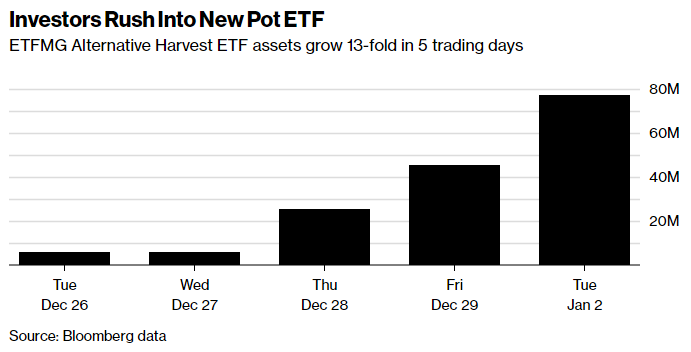 As a bonus, I am including a watch list of all the cannabis and hemp-related stocks I could find.  They are sorted alphabetically, and red, bolded lettering indicates that today’s volume saw at least 1 million shares traded.  Be wary, as the majority in this sector are dominated by algorithmic trading machines that are easily seen while viewing one-minute charts.  Even with companies that are trading with huge volume, the one-minute charts are not tradable intraday and are questionable for swings.  Seasoned traders know what I am talking about; volume spikes are sporadic, with dead zones and poor liquidity in between.  Do your due diligence. 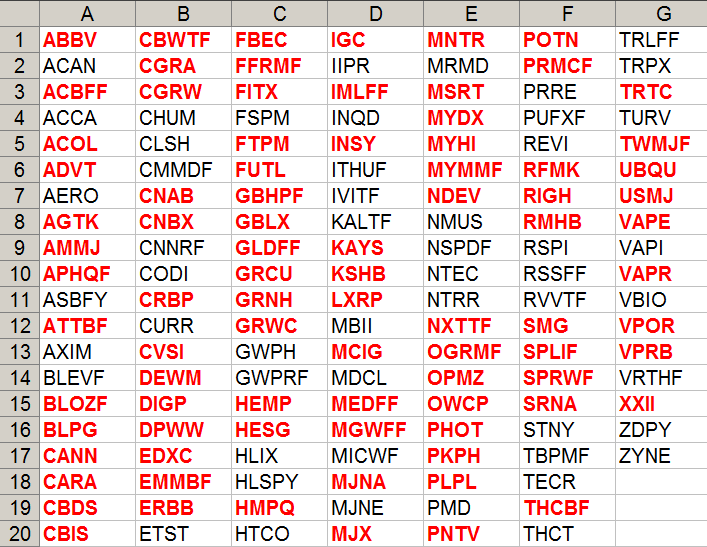 I am including the $MJX chart, as it appears to be maturing into a tradable intraday or swing candidate for seasoned traders that are seeking to jump into the fray.  Because this ETF is so young, I would let it consolidate and blow off recent steam, as it got ahead of itself due to the California announcement and the DOJ announcement was putting some pressure on the sector today.  It is one of the few charts that exhibit decent liquidity on the one-minute chart vs. the Borg-like algorithmic and insider BS that dominates the sector.  Its volume today came in at just over 6.5 million. 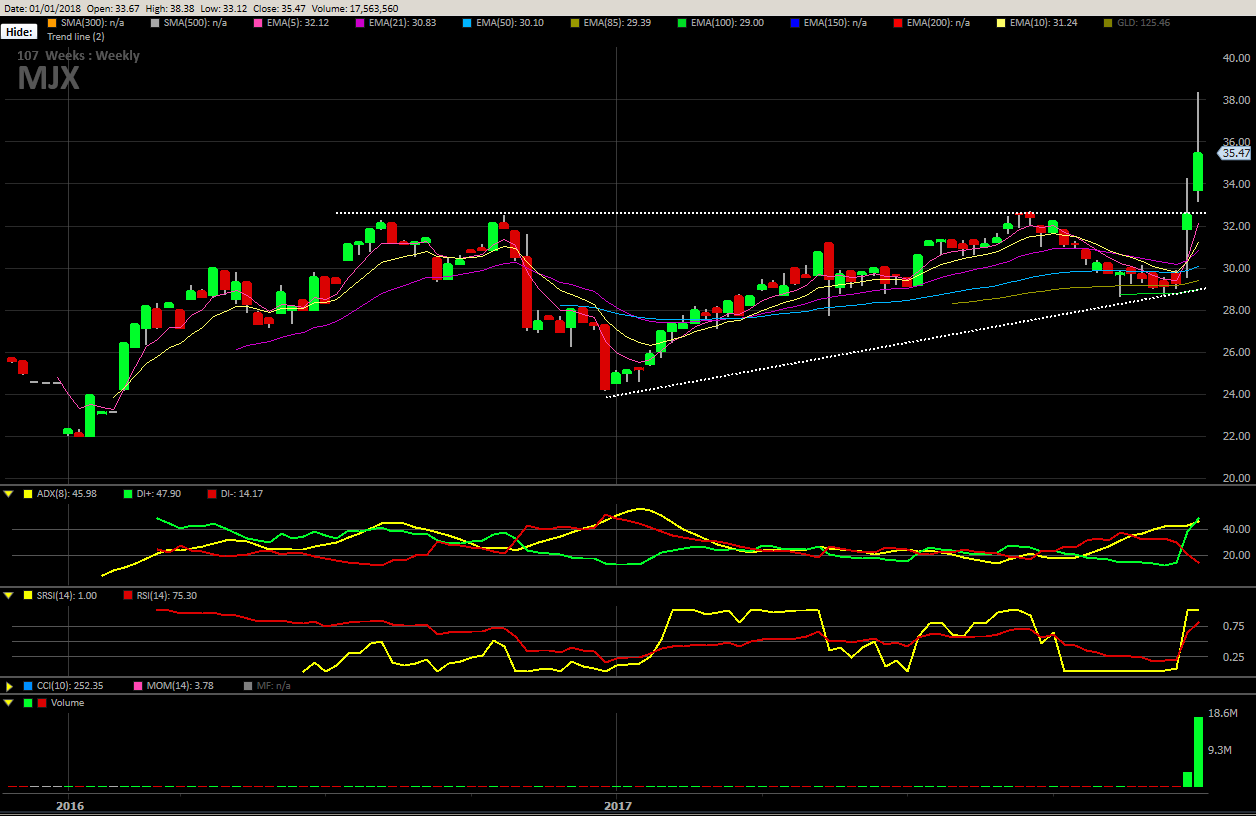 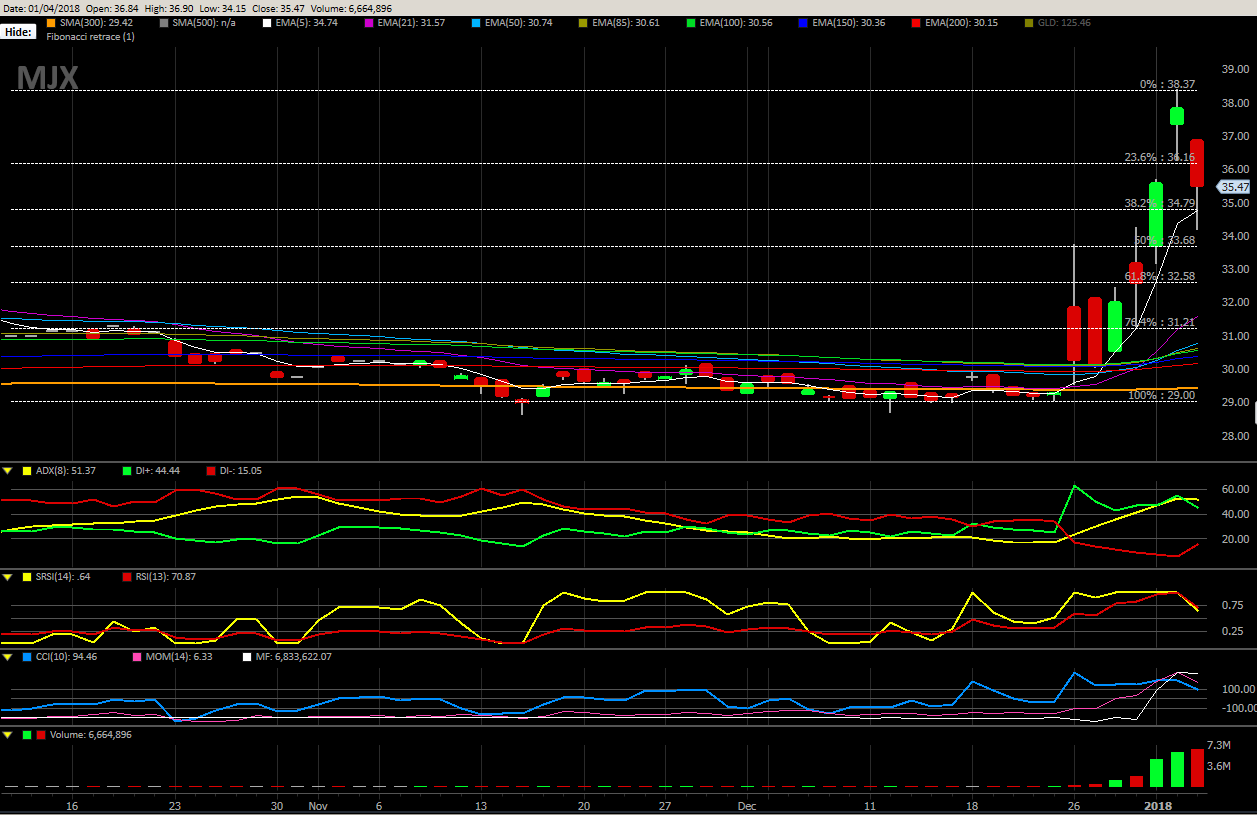