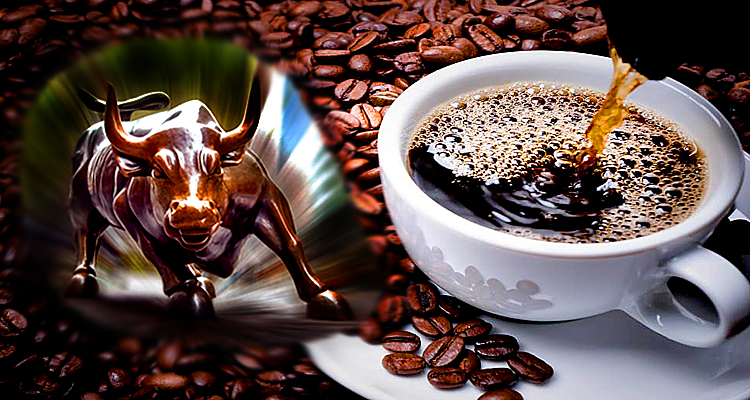 Coffee is one of the most popular beverages consumed worldwide, has received a good amount of press lately about having superfood status, and is currently the number-one beverage in the United States. The top six beverage categories worldwide and top six coffee-consuming countries per capita are as follows:

The coffee bean is one of the most traded commodities in history and its economic, medicinal, political, and social properties gave rise to its globalization and reputation as a legal drug, but consumption was restricted in some cultures. The caffeine stimulant in coffee put restraints on its popularity through the religious laws of Islam, where controversy surfaced over whether it fell within the laws of Khamr. Any beverage that contains a mind-altering substance (such as alcohol) is forbidden. Catholicism considered coffee a “bitter invention of Satan” until Pope Clement VIII sipped on a cup of joe and declared it legal for Christians to drink. 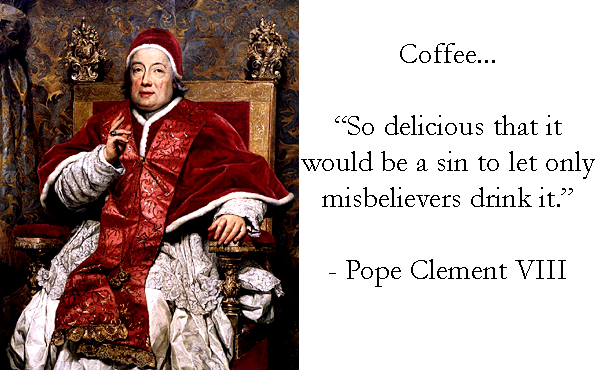 Coffee was discovered in Ethiopia in around the 11th century, where its use included boiling the plant leaves over charcoal for medicinal purposes, and it made its way to the Arabian Peninsula by way of Yemen.

The History of Coffee… “Coffee cultivation and trade began on the Arabian Peninsula. By the 15th century, coffee was being grown in the Yemeni district of Arabia and by the 16th century it was known in Persia, Egypt, Syria, and Turkey.” – NCA

As the Western World knows it, coffee originated in Turkey during the reign of Sultan Suleiman in the Ottoman Empire, where the beans were roasted and brewed in water. Its aroma and stimulant properties made it so popular at the Ottoman palace that the position of “coffee brewer” was born. Coffee’s use extended to the general population and was eventually served in every household and restaurant in Istanbul.

During the 17th century, coffee made its way into Europe and England through Italian merchants that introduced the Venetians to the Turkish beverage. Some argue that England’s love of coffee came through colonization and trade with East India. One of the first successful attempts by Europeans to grow coffee was by the Dutch in Java, Indonesia, where the farmers were forced to sell their harvest back to the Dutch at cheap prices. France was the next country to colonize coffee production and used slaves in East India.

Coffee came to North America through colonization and Jamestown, Virginia by explorer Captain John Smith. The love of coffee eventually spread throughout the colonies with coffeehouses. A big moment in coffee’s adoption in North America was the Boston Tea Party in 1773. The Townshend Acts and Tea Act were attempts by England to save the English East India Company from collapse through direct shipment of tea from the Americas and tax-free exports from England. The American colonists were not happy about new taxes being imposed on their colonies by the King of England without representation, and the rest of the story led to the American Revolution. The patriots subsequently adopted an anti-tea attitude because it was representative of England and switched to coffee as their favorite morning and past-time brew.

“I have had coffee every afternoon since …drinking tea is unpatriotic… tea must be universally renounced.” – John Adams

A recent surge in global coffee production and exports has led to a collapse in the price of coffee, with intermittent price spikes since 2011. Coffee futures traded at $308.90 per contract in May of 2011 and plunged to a low of $87.60 in May of 2019. 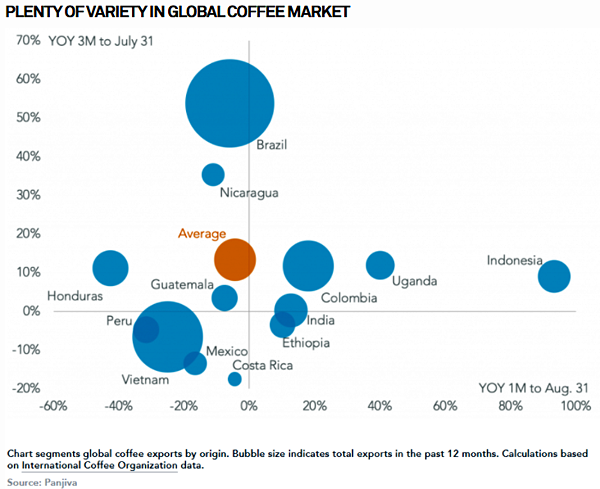 Some analysts remain sanguine about any potential supply shortage or price spike for two reasons. The first is ample inventory as a backstop. The second is that financial market pricing revolves around the raw, non-roasted bean, which is now roughly $1+ per pound as noted in the November ICO report. The price point that producers are seeking for future sustainable production is $1.50 to $2 per pound (see video at the end of this article). The cost of raw beans varies by up to 20% of end-user pricing per pound. The remaining expenses include shipping, processing, packaging, and retail overhead at the local grocer. The impact on retail pricing is not expected to rise too much because the price for the raw bean is relatively low vs. overall costs. 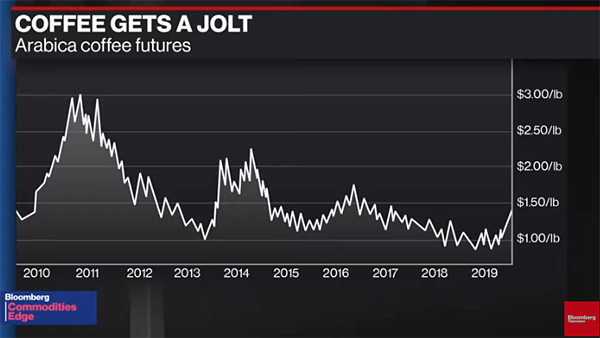 The near-term issue appears to be a threat of delivery defaults by producers under contract for lower prices than current or future contracts. The article on Vietnam noted above is one example of that risk. If delivery defaults domino and a production deficit grows beyond expectations for any unforeseen reason going forward, contagion could result in additional price spikes in the future.

Here is the current price data on ICE Coffee Futures pricing through to Sep. 2022. 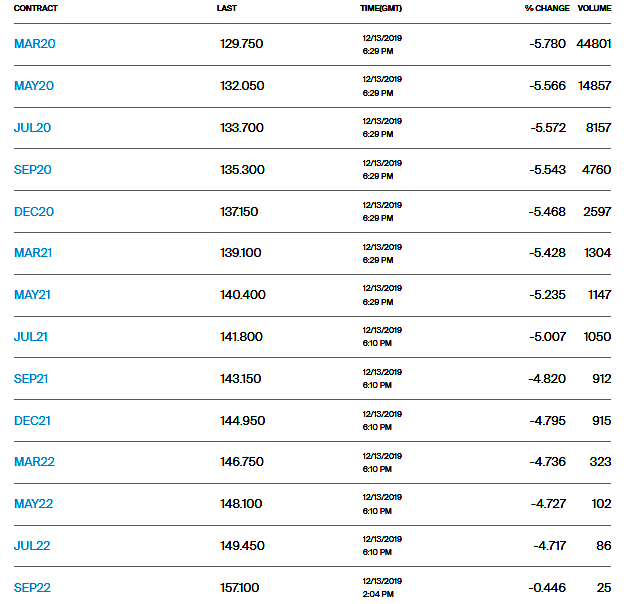 Stay abreast of market conditions and consider the technical analysis on the following charts. To view a larger version of either chart, right-click on it and choose your “view image” option. 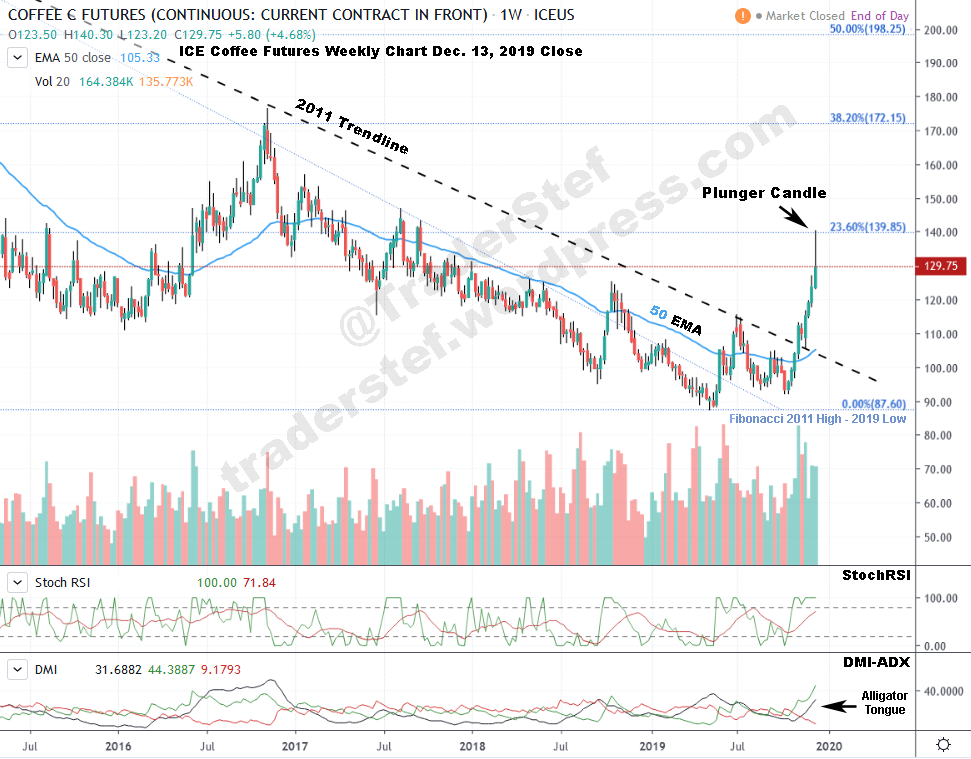 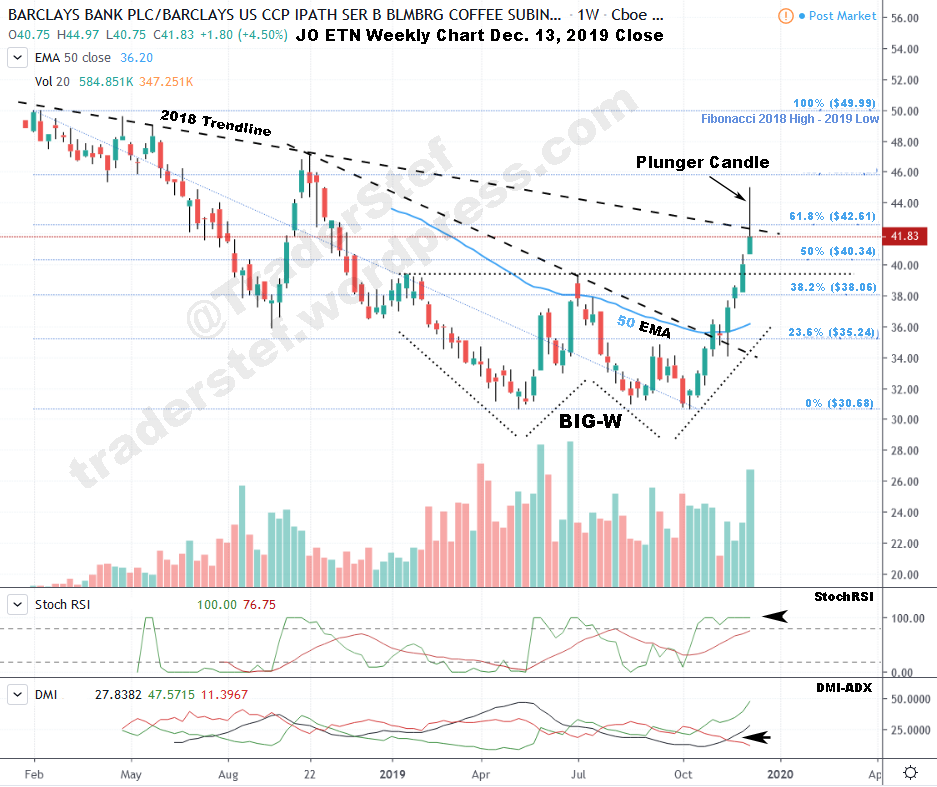 The focus is on the Futures chart with its 2011 high of $308.90 that plunged to a low of $87.60 during May of 2019. The trendline drawn down from the 2011 high was taken out with conviction in the first week of Nov. 2019 and the price spike was halted dead in its tracks this week at the 23.6% Fibonacci level. This week’s price action put in a high of $140.30 and closed today at $129.75, which printed a bearish Plunger Candle (aka Shooting Star). Positives on the chart are a bullish Alligator Tongue setup on the DMI-ADX and solid buy Volumes since mid-October. Negatives are the Plunger Candle and a StochRSI into overbought territory.

The parabolic move in price appears to have gotten ahead of itself, and profits were taken this week while approaching the close. There clearly needs to be a period of price consolidation IF the price action is destined to take out the 23.6% Fibonacci and reach the 38.2% level at $172. Due to the Alligator Tongue, chances are good that further price gains may take place after a consolidation on shorter time period charts.

Retail investors have the option to play the JO ETN for exposure to coffee. There is not much of a difference in the analysis between JO and the Futures chart. The exceptions are the price, Fibonacci levels, and that JO only has a price history that extends back to Jan. 2018. 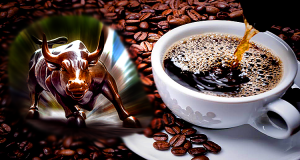