“I wanted a perfect ending. Now I’ve learned, the hard way, that some poems don’t rhyme, and some stories don’t have a clear beginning, middle and end.”

The adults are always responsible for the important work. 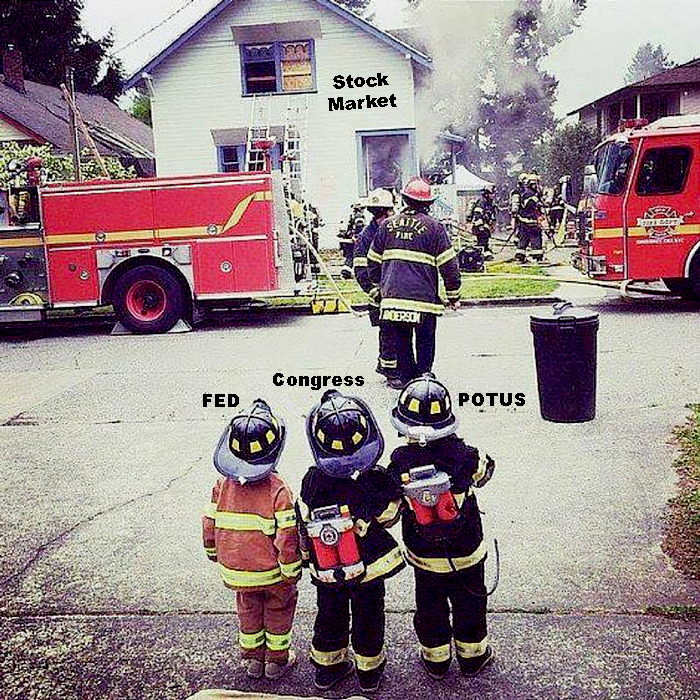 Before reviewing a technical analysis of the DOW and S&P 500 charts, inhale these two graphics… 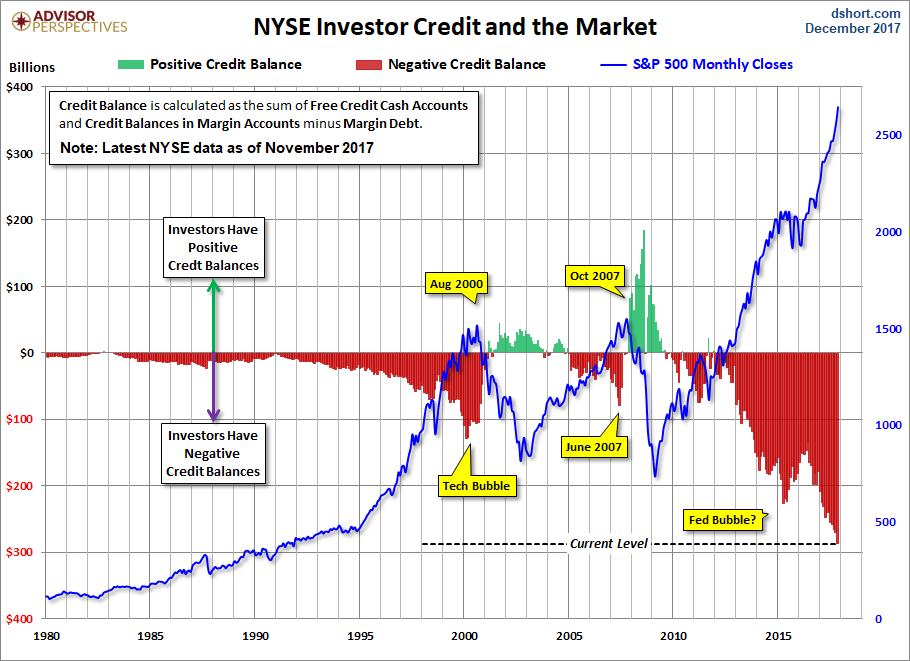 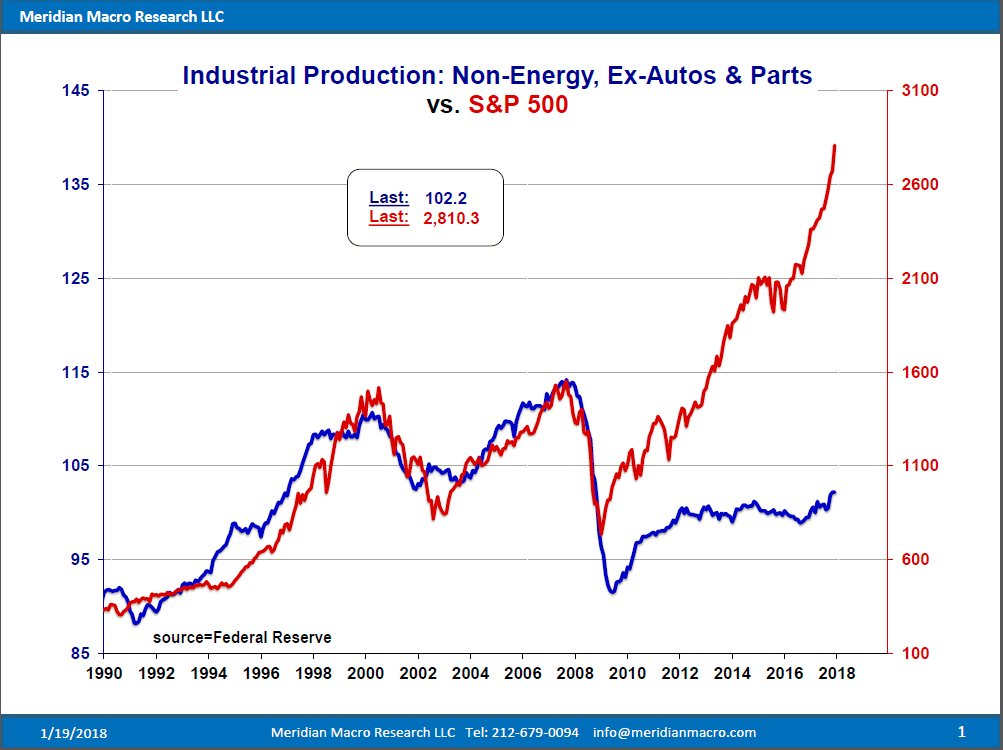 The DOW and its corresponding ETF ($DIA) and the S&P 500 and its ETF ($SPY) are showing the same characteristics: the price rise is exhibiting a parabolic curve.  All the studies are in and/or beyond previous overbought conditions.  The most troubling is that volumes have been on the decline since 2009.  The house is on fire, with a depleted available water supply, and flames are breaching the roof.

Predicting when and what will cause this party to end is anyone’s guess.  It would be better for it to end sooner, rather than later.  What I do know is that there are two possibilities taking place, and they could be occurring at the same time.  Neither option will end well.  It’s plain vanilla Irrational Exuberance, or we could be witnessing the early stages of a Hyperinflation scenario and USD’s collapse.  Pray for the vanilla option. 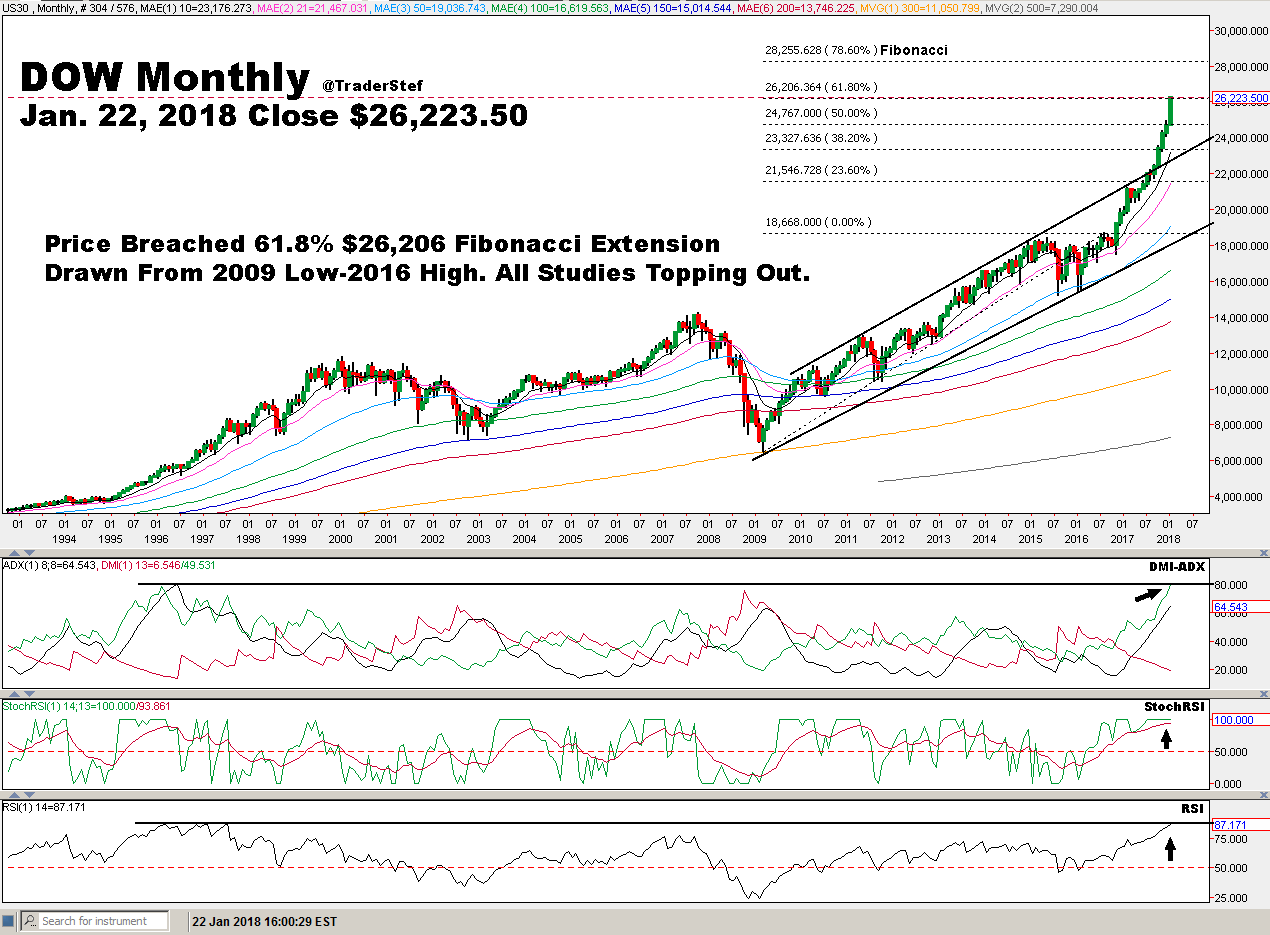 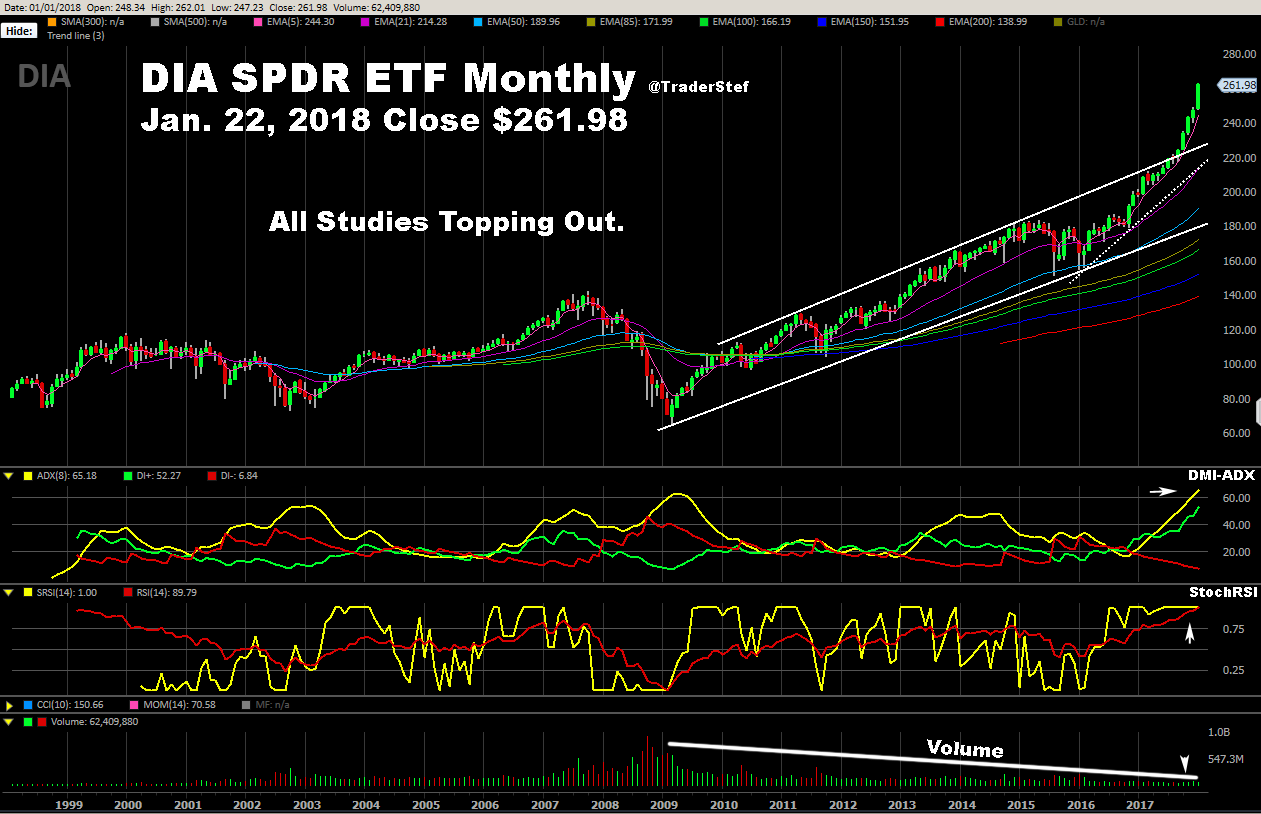 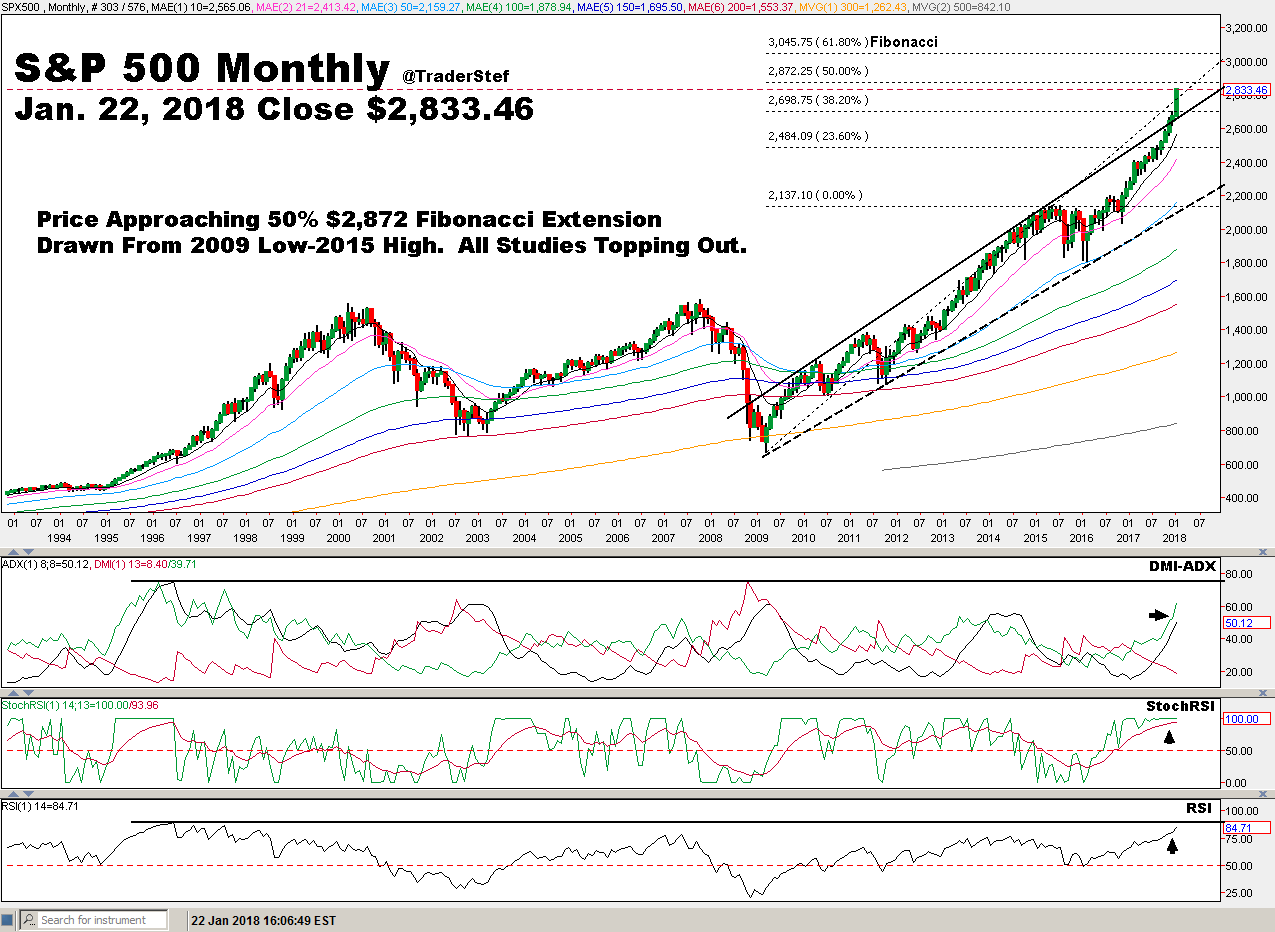 S&P 500 SPDR ETF $SPY weekly as of January 22, 2018 close.  My platform would not populate a monthly chart late in the day, so all I have to offer is the weekly.  There’s no difference, given the parabolic condition. 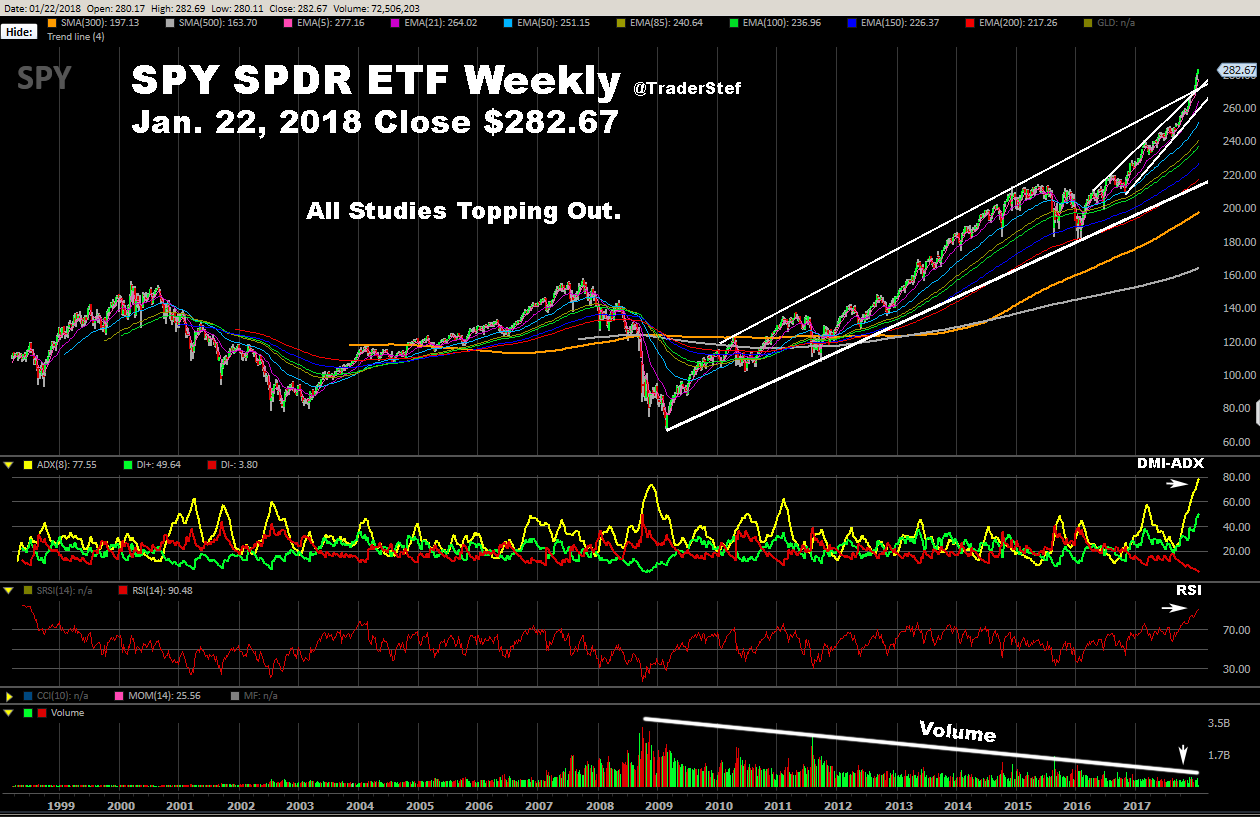 Regarding the government shutdown, there are no worries – the Democrats caved in.  The downside is that there is currently no budget and no debt ceiling. 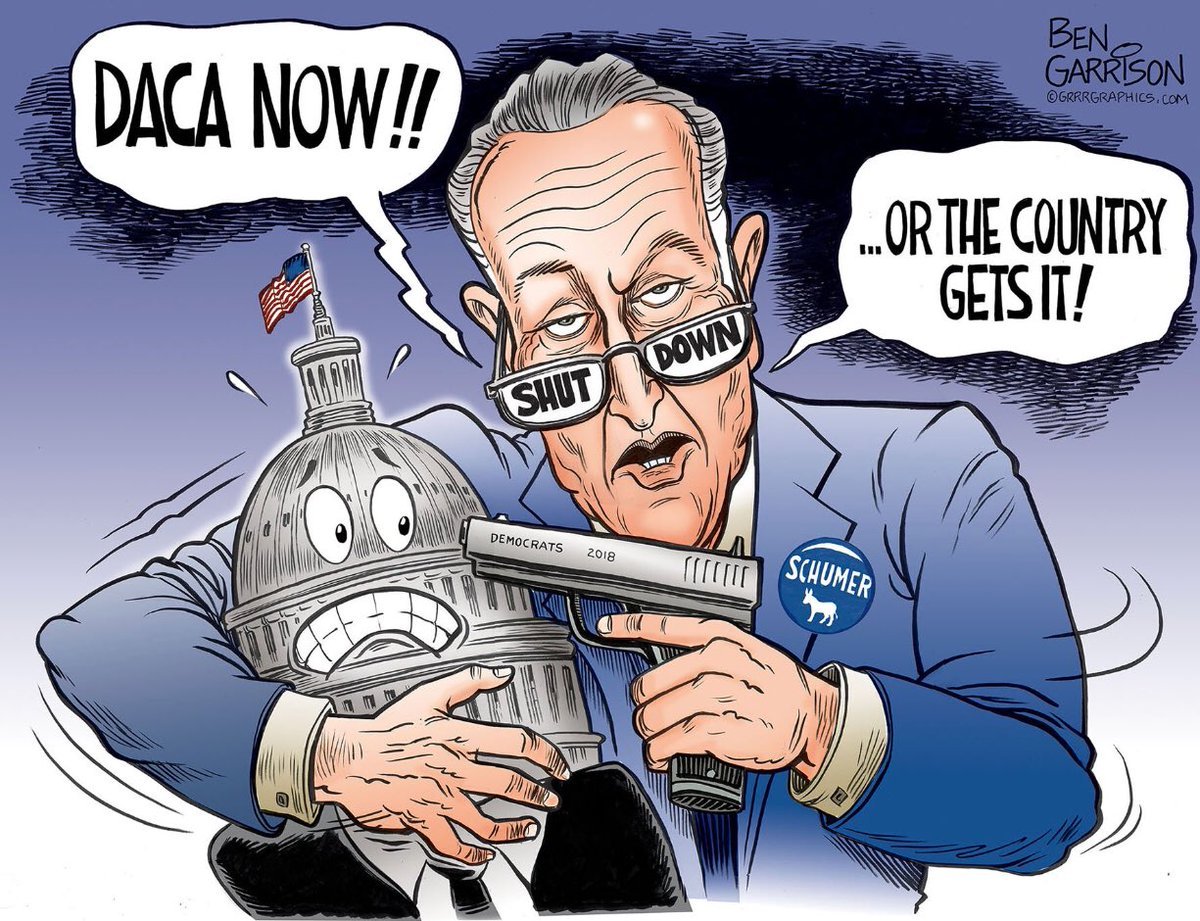 Democrats caved on the shutdown, and they’re admitting it – Washington Post

“Today’s cave by Senate Democrats — led by weak-kneed, right-of-center Democrats — is why people don’t believe the Democratic Party stands for anything… These weak Democrats hurt the party brand for everyone and make it harder to elect Democrats everywhere in 2018.” – Stephanie Taylor, co-founder of the Progressive Change Campaign Committee via The Hill