The Federal Reserve may have driven itself into a dead end of a one-and-done interest rate hike in Dec. 2018, and they are holding their noses (see Porky Pig) over the stench of a 20% correction in the stock market. U.S. economic data metrics are deteriorating across the board as we approach the final months of a business cycle on the heels of a slowing global economy. If recent volatility in the stock market is any indication of what 2019 has in store for Main Street, the weakening global economy will put a final fork in the 10-year pig party and any hope for further U.S. economic expansion will grind to a screeching halt. I would not be surprised to see headlines on the news ticker saying that the Fed calls an emergency meeting after an additional 10-20% plunge in equities. A halt to Quantitative Tightening and the raising of interest rates will likely occur in a step-down fashion so as to not create panic in an already precarious TaperCaper situation.

Here are a few news items from the past week that are worthy of a mention before moving onto the Dow and S&P 500 charts. 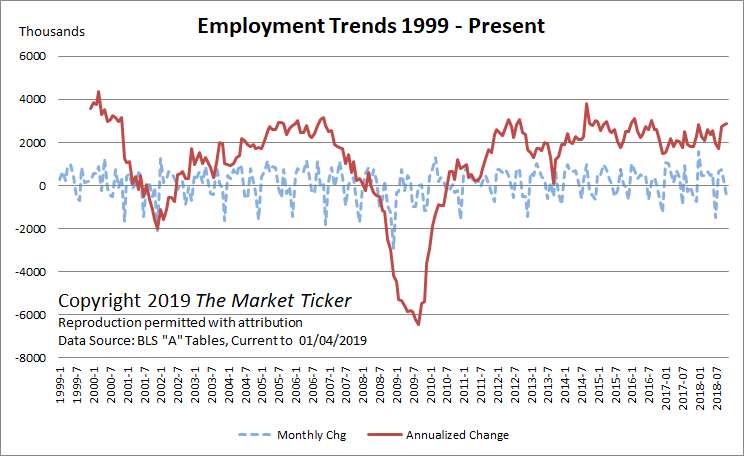 Keep one eye on Brexit and the other on the US-China Trade War.

If you did not see my recent technical analysis on the stock market leading up to today, here are the links: 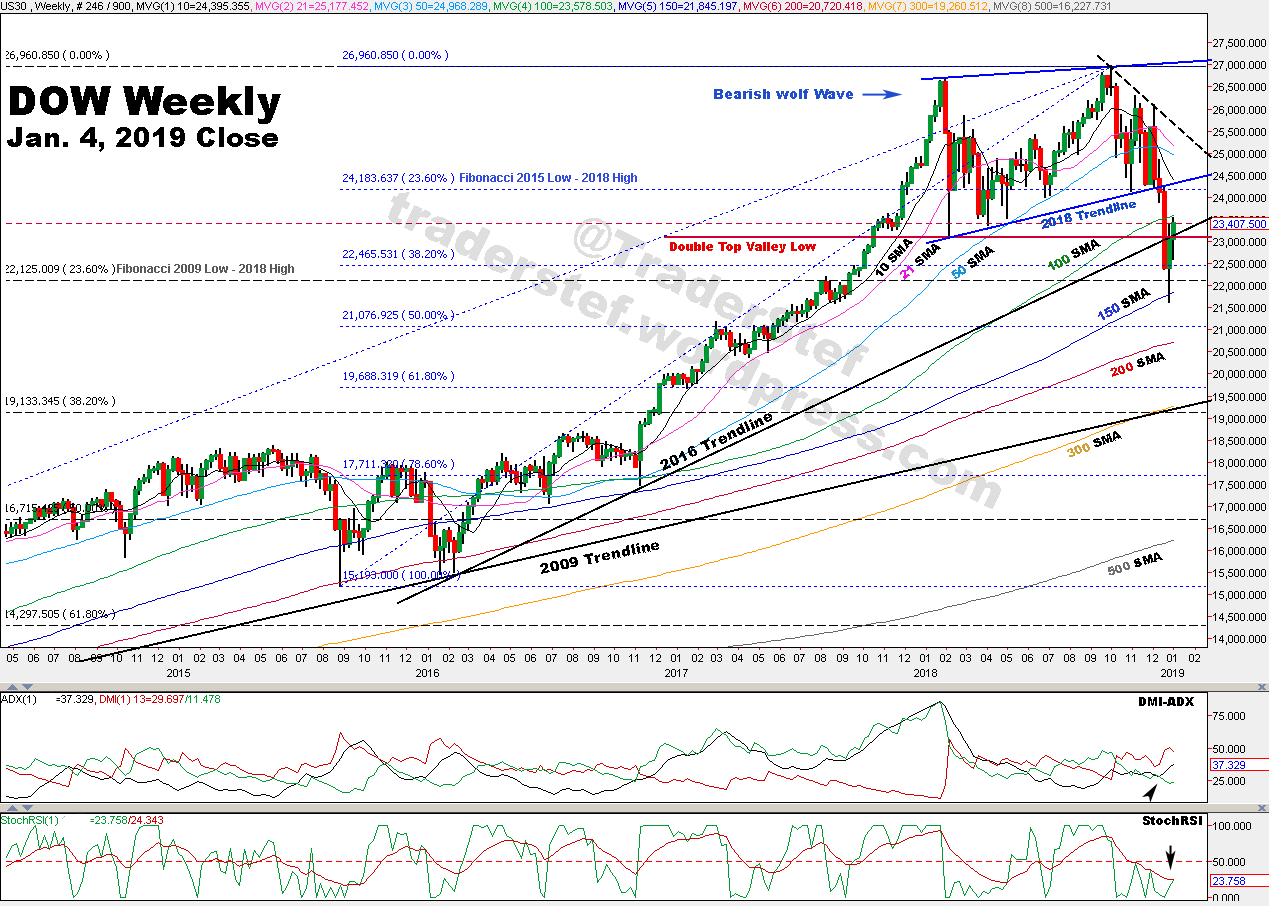 “Two potential patterns have surfaced on the Dow. There is a Bearish Wolfe Wave within the upper and lower blue trendlines. If the lower trendline is breached to the downside, the Wolfe Wave confirms. A Double Top has also taken shape within a 3% price range, which includes the 26,698 January high and 26,960 September high marked with an Evening Doji Star candlestick. The Double Top confirms if the valley low at 23,112 is breached decisively to the downside. The 23.6% Fibonacci drawn from the 2015 low is providing support, but the 50 Simple Moving Average (SMA) has been breached to the downside multiple times since October. The StochRSI remains in a negative momentum pattern and the DMI-ADX is negative but indecisive. One study keeping the Dow out of a full-blown bear market is the trendline drawn up from the February 2016 low that has not been touched. This weeks low is only 1,500 points away from the 2016 trendline and we have already had weekly swings of that magnitude since February. A decisive breach of the 100 SMA, the Double Top valley low, or the 2016 trendline may lead to a major plunge.”

As seen on the weekly chart, the Dow may be in the midst of a Dead Cat Bounce after putting in a low the day after Christmas. News headlines and economic data have pushed the market around following the plunge below the 100 EMA, the Double Top valley low, and the 2016 trendline. The candlestick from Christmas week pivoted off the 150 SMA following a close on the 38.2% Fibonacci level the previous week. The price staged an impressive rally on Jan. 4 due to hype over the jobs report, but it ran into stiff resistance at the overhead 100 SMA. The Fibonacci levels and remaining SMAs are support levels to the downside. The DMI-ADX is still showing a potential for downside momentum and the StochRSI has not yet flipped to the positive side of the ledger. The fact that the price managed to put in a close well above the Double Valley low is a positive development, but I am not convinced. The Dow will need to stage a solid 2,000pt rally from here and decisively take out the topside trendline drawn down from the Oct. 3 high in order for anyone to breathe easy. Even then, the Oct. high must be taken out with conviction for the 10-year bull to reassert itself instead of printing a Triple Top, and that requires a wicked 4,000pt+ rally from here. I suspect we will see every rally sold on strength as market players lock in profits on the heels of news cycles full of surprises from the political spectrum and global economy. I am cautiously bullish near-term but remain bearish overall because any rally may just be another Dead Cat Bounce in a string of chops. 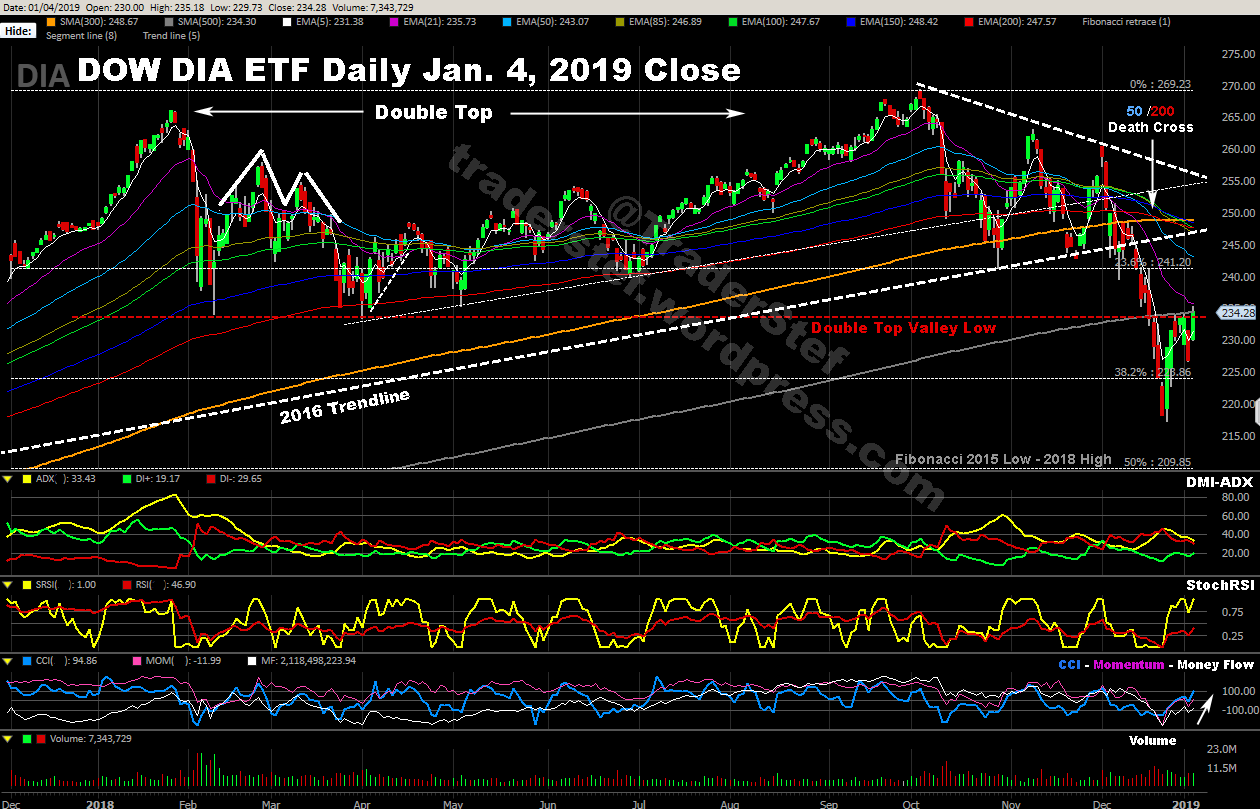 “The Falling Knife of the price held the 38.2% Fibonacci level drawn up from the 2015 low to the 2018 high. The 50 & 200 Exponential Moving Averages (EMAs) crossed to the downside, and that triggers an ominous Death Cross signal. The DMI-ADX has formed a negative momentum Alligator Tongue, the StochRSI bottomed out with no sign of resurgence, and the volumes are rising along with the falling price. Everything on this daily chart is bearish.”

There is a lot of resistance to conquer following the plunge. The DMI-ADX remains in a negative momentum stance and the StochRSI has topped out into overbought territory due to the rally off the pivot. The price has stalled at a confluence of overhead resistance, which includes the Double Top valley low, the 21 EMA, and the 500 SMA. The buy volumes are not spectacular, however, the CCI, Momentum, and Money Flow indicators provide a glimmer of hope that the rally continues. The daily may look better than the weekly due to the pivot in price, but the fact remains that we may have a potential Dead Cat Bounce on our hands as the ETF price prints off the Dow index. Caution is warranted near-term, and I am bearish overall. 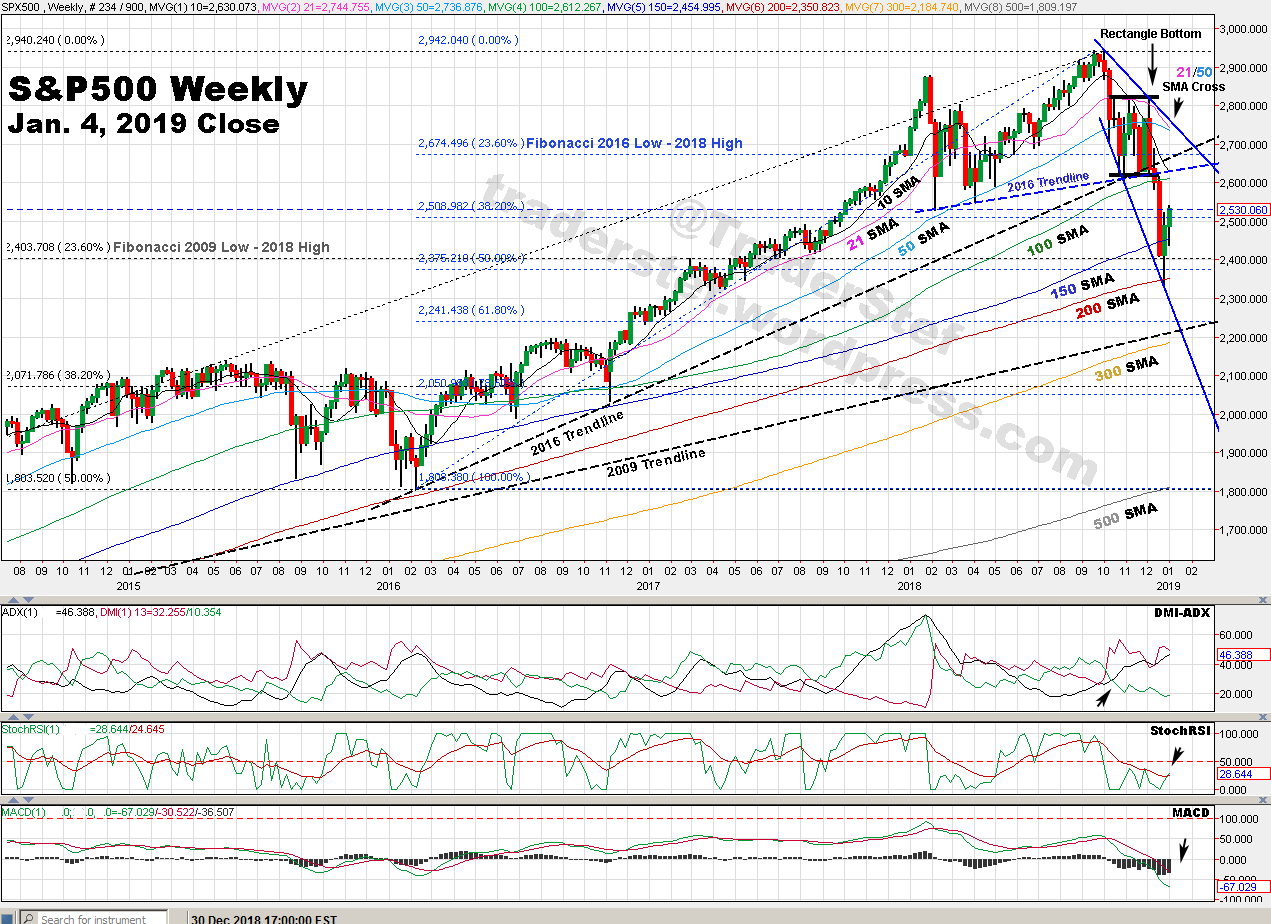 “Unlike the Dow, the S&P 500 is already kissing the 2016 lower trendline. There is no Double Top here because the January and September highs are beyond a 3% price spread, but a bearish Rectangle Bottom has taken shape. The 21 SMA is acting as resistance on every price surge to the upside, and a confluence of the 85 and 100 SMA along with multiple trendlines are providing support with the 50 SMA stuck in the middle. The StochRSI remains in a negative momentum pattern and the DMI-ADX is negative but somewhat indecisive. If the 2016 trendline and 100 SMA are breached with conviction, we could have a major plunge on our hands.”

The bearish Rectangle Bottom, 100 SMA, and 2018 and 2016 trendlines were breached decisively to the downside three weeks ago, and the price plunged to a confluence of Fibonacci levels where it pivoted off the 200 SMA. The rally came into resistance at an overhead Fibonacci level and a lateral where the price put in a low back in Feb. 2018. Just like the Dow, there is a lot of overhead resistance to conquer. The 21 SMA is about to cross over and down through the 50 SMA, which can add additional pressure to the downside. The DMI-ADX still shows the potential for downside momentum, the StochRSI has not yet flipped to the positive, and the MACD continues a trend to the downside. Every rally may be sold on strength as market players lock in profits. I am cautiously bullish near-term but remain bearish overall as any rally may be a Dead Cat Bounce within a string of chops while the price struggles with overhead resistance areas that previously acted as support. 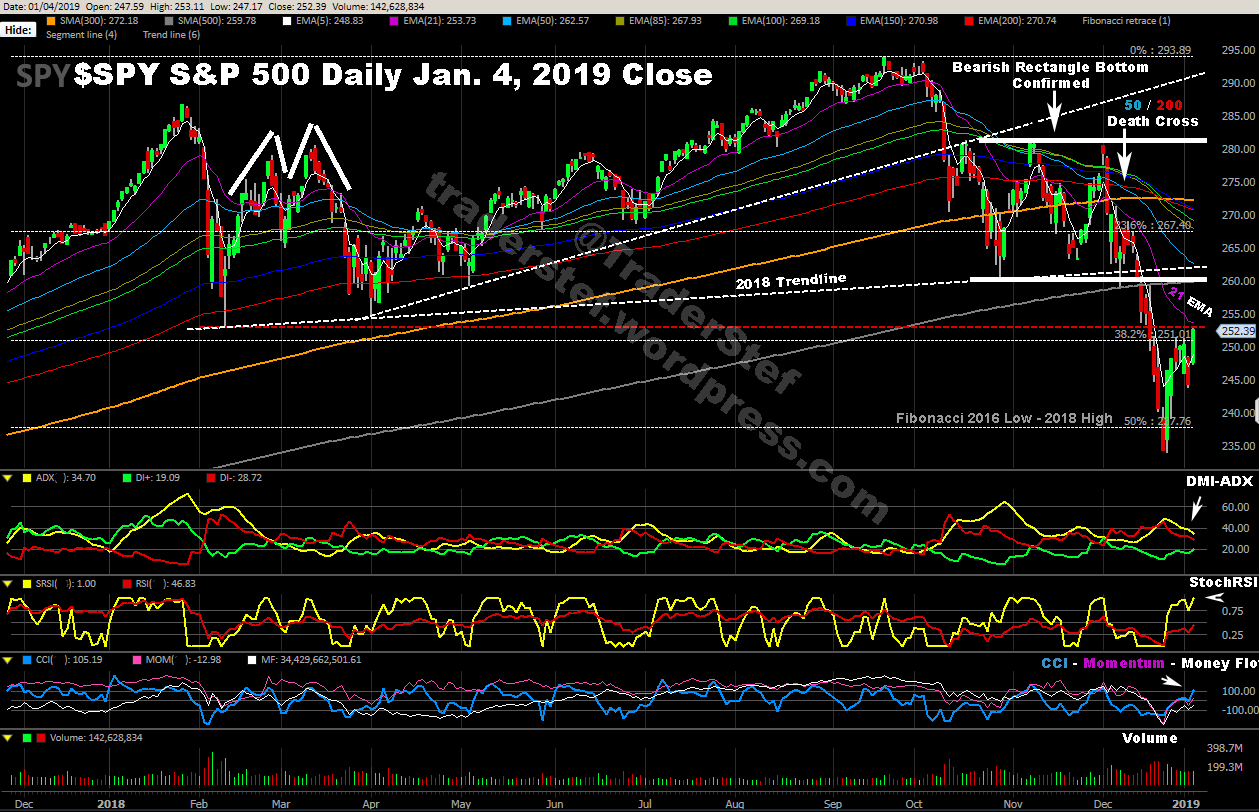 “The bearish Rectangle Bottom pattern was confirmed this past week. The 2016 lower trendline, the February 2018 low, and the $251 38.2% Fibonacci level drawn up from the 2016 low to the 2018 high were decisively breached to the downside. The 50 & 200 EMAs crossed to the downside, and that triggers an ominous Death Cross signal. The price closed slightly above the $238 50% Fibonacci level. The DMI-ADX has formed a negative momentum Alligator Tongue, the StochRSI bottomed out with no sign of resurgence, and the volumes are rising along with the falling price. Everything on this daily chart is bearish.”

The $SPY looks very similar to the $DIA, with a lot of overhead resistance to conquer following the plunge in price. The DMI-ADX remains in a negative momentum stance, and the StochRSI topped out in overbought territory following the pivot off the 50% Fibonacci level. Do not ignore the Death Cross on this daily chart. The price has stalled at a confluence of the 21 EMA, 38.2% Fibonacci, and lateral drawn back to the Feb. 2018 low. The buy volumes are not great, however, the CCI, Momentum, and Money Flow indicators are itching for the rally to continue. As with the $DIA, this rally may look better than the weekly due to the pivot, but we may have a Dead Cat Bounce on our hands as the ETF price prints off the S&P 500 index. Caution is warranted near-term, and I am bearish overall.

Everybody wants to sell what has already been sold.  Got your gold and silver?