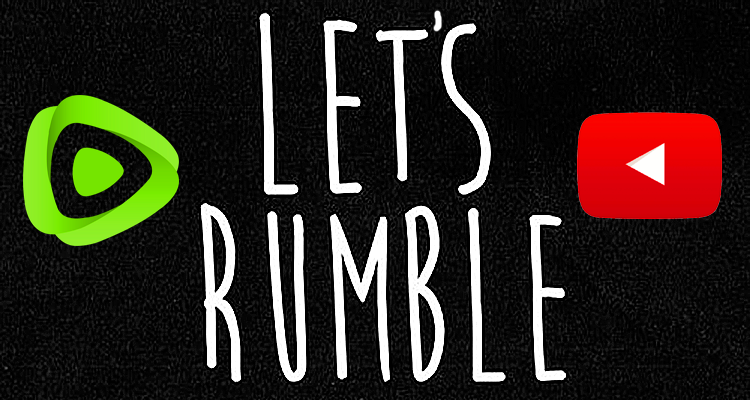 The current political atmosphere in the U.S. and other western societies is sadly turning a page that culturally engenders George Orwell’s dystopian vision from “1984.” Today’s epistle does not endorse or recommend investing in any company, icon, chart displayed, but is in memorandum of the First Amendment and dotcom bubble. It’s an observation of how history can repeat itself with new variables or a conglomeration of old ones, and how science fiction or fiction is often transformed into a non-fiction reality that stealthily beams into your living room and dominates every thinking facet of public and private life.

“What’s the Story?: Narrated with infinite precision, 1984 is one of the most famous dystopian satires in the English language. Its vocabulary – ‘doublethink,’ ‘Big Brother,’ ‘down the Memory Hole,’ ‘Thought Police,’ ‘unperson’ — has become part of popular culture. Winston Smith’s quest for freedom under the gaze of all-seeing, all-knowing Big Brother still resonates strongly today, when privacy is hard to come by and governments adopt intrusive policies, supposedly to keep their citizens safe.”

“Let’s Get Ready To Rumble” From Rocky VI – Michael Buffer

Anyone that follows financials and stock markets since the dot-com bubble are familiar with Google (aka Alphabet as of Oct. 2015), which morphed into a corporate behemoth with acquisitions such as YouTube. Google held its initial public offering (IPO) as a Nasdaq listed stock in August 2004 for $85 a share. In 2014, its first stock-split was a 2-for-1 spinoff (1,998-for-1,000) and investors received one share of Class C ($GOOG non-voting) stock for every Class A ($GOOGL) share owned. 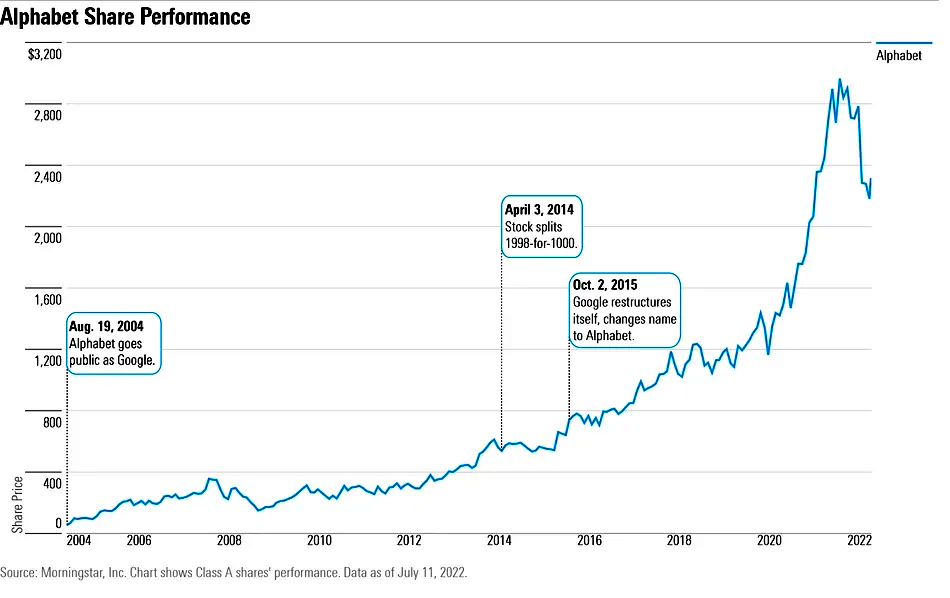 On July 18, 2022, Alphabet’s second stock split was 20-for-1 as shareholders received an additional 19 shares for each one owned. The price of a single share of Alphabet stock became more affordable by dropping from roughly $2,200 to $113 after the split. “A stock split doesn’t in and of itself make the company more valuable. If it’s a stock an investor feels like is an attractive value, it should be an attractive value before and after the split.” As of Sep. 22, $GOOG closed at $100.57 and $GOOGL at $100.15. They remain in bearish territory today based on a technical analysis of the charts, but some financial analysts at institutional research firms consider it a buy. There’s a distinct difference between its Class A & C shares that need to be considered before trading or parking capital.

Do your due diligence before investing your capital in anything, which brings us to Rumble. 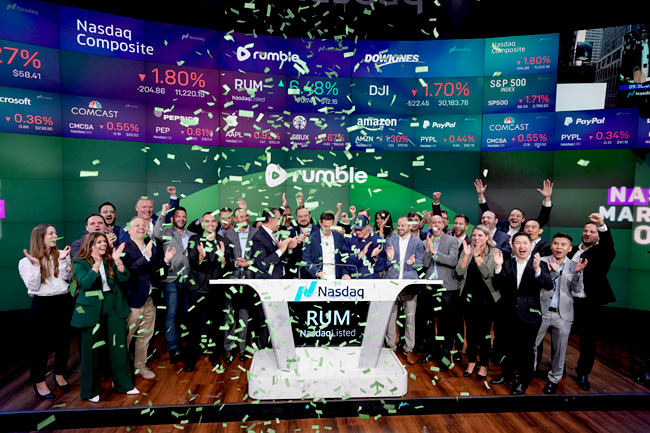 Rumble’s stock symbol $RUM has been coined a “symbol of freedom” in a press release that announced its listing on the Nasdaq exchange.

“At market open, the ticker symbol will switch from ‘CFVI’ to ‘RUM’ for the company’s common shares. While stock ticker symbols can be an afterthought, for Rumble, ‘RUM’ holds a special connection to the company’s mission to protect a free and open internet. It’s a little-known fact that rum was one of the many catalysts of the American Revolution due to unrest created by the British-imposed Sugar Act of 1764. The Act imposed regulations and taxes on molasses, a key ingredient used to produce rum. During the colonial era, rum was among the most-consumed alcoholic drinks in America. Without rum, the colonists may never have fought to win the freedom that Americans enjoy today – the very freedom that Rumble exists to protect. ‘As a mission-driven company, we do everything with a purpose,’ said Rumble Chairman and CEO Chris Pavlovski. ‘As we considered available tickers, the history of rum as a symbol of freedom was the perfect match for Rumble.’” – PR Newswire, Sep. 19, 2022

There is another side to the story of rum, as it was the favorite drink of pirates. Ho ho ho and a bottle of rum, savvies. Despite the negative connotations that the life of pirates might imply, they were living life as they wished and enjoyed what the fruits of freedom could offer.

Pirates of the Caribbean – All Rum Scenes

Why Did Pirates Love Rum?… “The Caribbean waters were once the focal point for pirate activity; it was in the Caribbean that they would attack and loot naval and merchant vessels, taking the crew hostage and removing valuables for sale in ports across the waters. Many pirates would start out their careers as naval sailors, or crewmen aboard merchant vessels, but would turn to piracy either as a result of discharge from such services, or because of the attractively lenient and democratic (yes, really) life to be found amongst buccaneers. Pirates were better paid and less restricted. Liquor, and in particular rum, rose to prominence on all vessels, due in part, to the advent of long-haul voyages that resulted from the European settling in the Americas. Grog, that well-known mariners drink, was a blend of rum, water, and sometimes lime, mixed with water to sanitize it after stagnation. In the navy this would be rationed to sailors twice a day, but pirates could have as much as they wished. The vast majority of the world’s rum came from, and still comes from, the Caribbean; Jamaica and the surrounding areas produce the most overall. Sugar, you see, was a large and plentiful resource there which was exported to America and Europe, but which was expensive to move. Rum, distilled from sugar, however, was cheaper to transport and so became a staple export. This meant that many of the ships attacked by pirates were laden with barrels of rum, ripe for the taking. They could be sold for a pretty price, but pirates tended to drink a fair chunk of this kind of loot.” – Pirate Ship Vallarta

If you believe that Rumble’s business model (i.e. acquired Locals community platform in Oct. 2021) as an alternative media platform will be successful, then purchasing shares at a low price point is ideal. After many months of waiting, the shareholders of its shell company CF Acquisition VI’s ($CFVI) approved a merger with Rumble on Sep. 15 and began trading as $RUM on Monday Sep. 19. If Rumble invests wisely to enhance the end-user experience, it might have a bright future after pocketing $400 million of gross proceeds from the reverse merger transaction.

Rumble is bringing a lot of new and experienced faces on board going forward. If you’re contemplating an investment into $RUM, become familiar (corporate blog) with who those executives turn out to be and the brains that will populate its board of directors. Rumble may or may not be the next Google or Amazon, but anything is possible as the plebes are getting red-pilled about tyranny and censorship at an exponential rate. If Rumble broadens its niche as a free-speech-focused alternative to legacy media outlets, it could be a fun ride to be on. 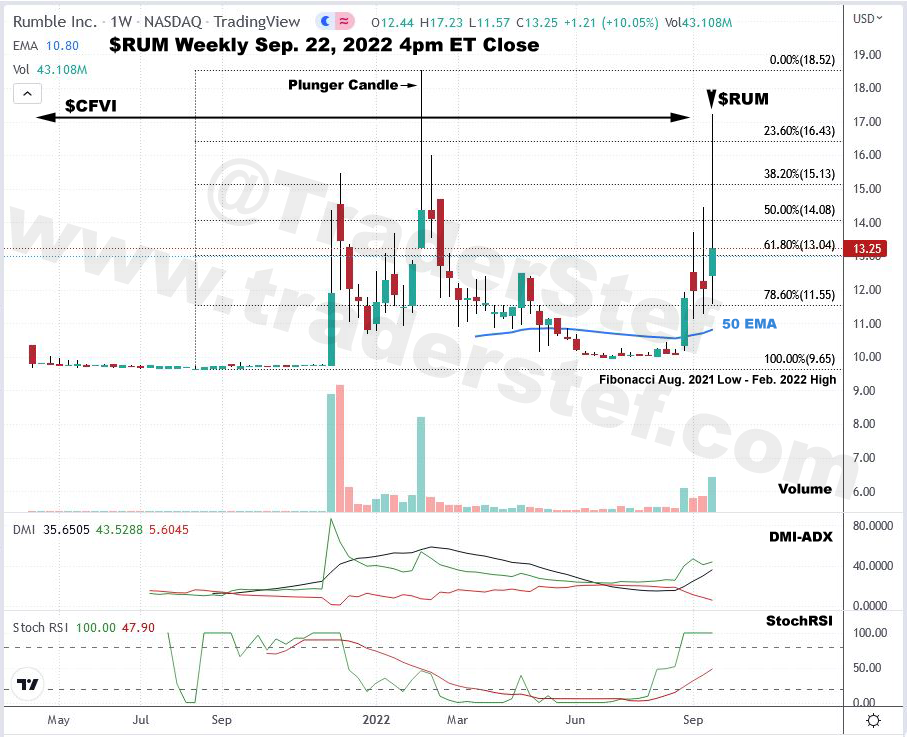 Rumble’s chart history is too brief to conduct a thorough analysis that provides any near-term certainty. The first week of trading as RUM is forming a potential Plunger Candle and that’s not a bullish indicator. Tomorrow’s trading activity will finalize the weekly candle. I would be patient for the price action to exhibit buy volume resilience and bullish patterns on shorter candlestick time frames before trading it or putting capital to work in a long-term core position. 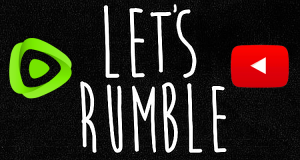