A Return of the Black Gold Rush 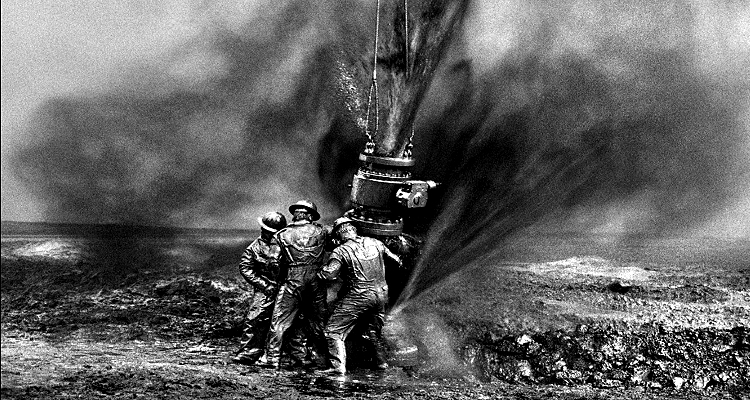 After closely watching the news flow over the last few weeks and following the passage of the tax reform bill, I suspect that a POTUS plan to roll out true energy independence is at full throttle.  There was activity in the oil and gas producing sector prior to the bill’s passage, primarily due to expectations that the bill would include a large tax incentive for all industries to repatriate monies back to the U.S. mainland and aggressively pursue capital investment to MAGA.  The cash is flowing, big rigs are being moved back to the mainland in mass, and it’s time to keep your eyes on the sector, savvies.  If not the price of oil, focus on the producers as they build out infrastructure. 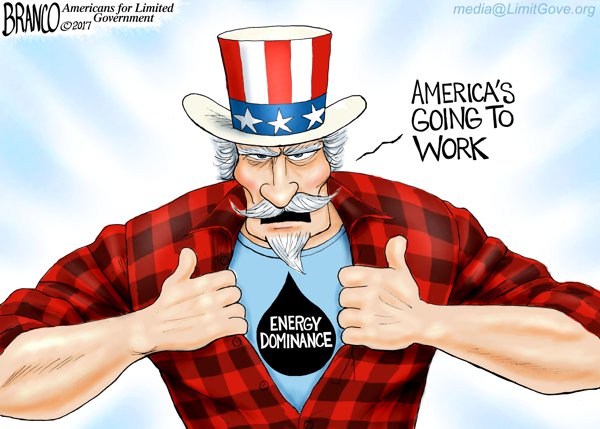 Tax and Regulatory Reform’s Economic Boon… “At ExxonMobil, we plan to invest more than $50 BILLION over the next five years to expand our business in the United States. These investments are underpinned by the unique strengths of our company and enhanced by the historic tax reform recently signed into law… we will be investing billions of dollars to increase oil production in the Permian Basin in West Texas and New Mexico, expand existing operations, improve infrastructure and build new manufacturing sites. This will create thousands of jobs, strengthen the U.S. economy and enhance energy security. This comes on top of our massive build-out of operations along the Gulf Coast where we are investing billions of dollars and creating tens of thousands of high paying jobs on a number of major chemical, refining and lubricant projects… The recent changes to the U.S. corporate tax rate coupled with smarter regulation create an environment for future capital investments and will further enhance ExxonMobil’s competitiveness around the world.” – Darren Woods, chairman and CEO of ExxonMobil, Jan. 2017

U.S. Rig Count Rises As Oil Holds Firm… “The Permian basin rig count accounted for much of this week’s gains, increasing by 18 rigs this week, now standing at 427 rigs versus 291 rigs a year ago this week.” – OilPrce.com, Jan. 2018 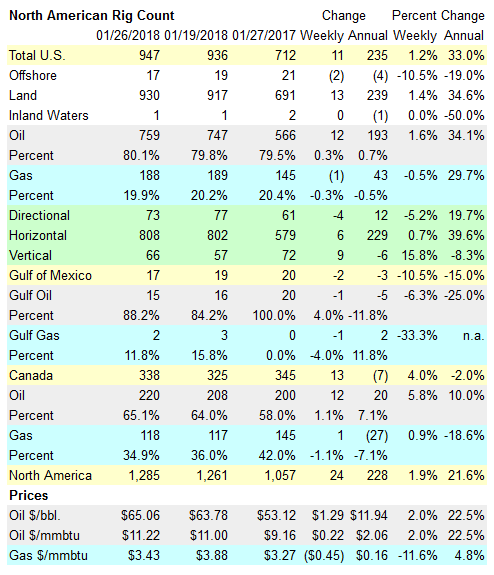 Are Oilfield Services A Buy? … “This has got to be my favorite part, where the pundits, bank analysts and columnists start to (quietly) revise their views on the oil markets.  One after one, they’re losing their pessimistic views on oil and realizing what we’ve known for the last year: Oil is at the beginnings of another real price boom. Some are even mentioning (heavens!) $100 oil.” – OilPrice.com, Jan. 2018

Texas Set For Another Oil Boom… “Texas is set for another oil boom, with production this year expected to hit a record high. That’s according to Karr Ingham, the oil economist who created the Texas Petro Index — a composite based on several upstream indicators. The December 2017 reading of the index was 188.8, up from 151.2 in December 2016. This is still far below the peak of 314.2, which was reached in November 2014, a few months after the price slide began, but it’s much better than 2016 readings. In fact, the TPI has been rising for 13 months in a row.” – OilPrice.com, Jan. 2018

U.S. on Track to Top Russia as World’s Largest Oil Producer, Upending Global Trade and Geopolitics… “U.S. energy exports now compete with Middle East oil for buyers in Asia, with breathtaking economic and political impacts. Surging shale production is poised to continue pushing U.S. oil output to more than 10 million barrels per day – toppling a record set in 1970 and crossing a threshold few could have imagined even a decade ago. The U.S. government forecasts that the nation’s production will climb to 11 million barrels a day by late 2019, a level that would rival Russia, the world’s top producer.  The economic and political impacts of soaring U.S. output are breathtaking, cutting the nation’s oil imports by a fifth over a decade, providing high-paying jobs in rural communities and lowering consumer prices for domestic gasoline by 37 percent from a 2008 peak. Fears of dire energy shortages that gripped the country in the 1970s have been replaced by a presidential policy of global ‘energy dominance’… U.S. energy exports now compete with Middle East oil for buyers in Asia. Daily trading volumes of U.S. oil futures contracts have more doubled in the past decade, averaging more than 1.2 billion barrels per day in 2017, according to exchange operator CME Group. The U.S. oil price benchmark, West Texas Intermediate crude, is now watched closely worldwide by foreign customers of U.S. gasoline, diesel and crude.” – Harretz, Jan. 29

Hedge funds have never been this bullish about oil… “The fact however remains that funds will continue to buy into strength until the music stops. This past week gave the bulls no cause for concern as the dollar weakened, worldwide growth was cheered in Davos and US crude stocks continued to decline.” – Mining.com, Jan. 29 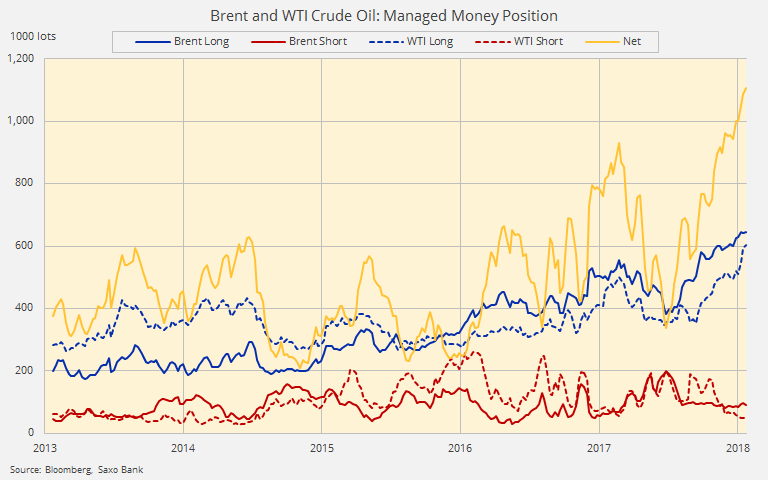 Peak oil, you say?  Ya know, it’s very freaking hot below your feet.  Oil is not running out. It just moves around, and sometimes old oil fields mysteriously refill themselves. 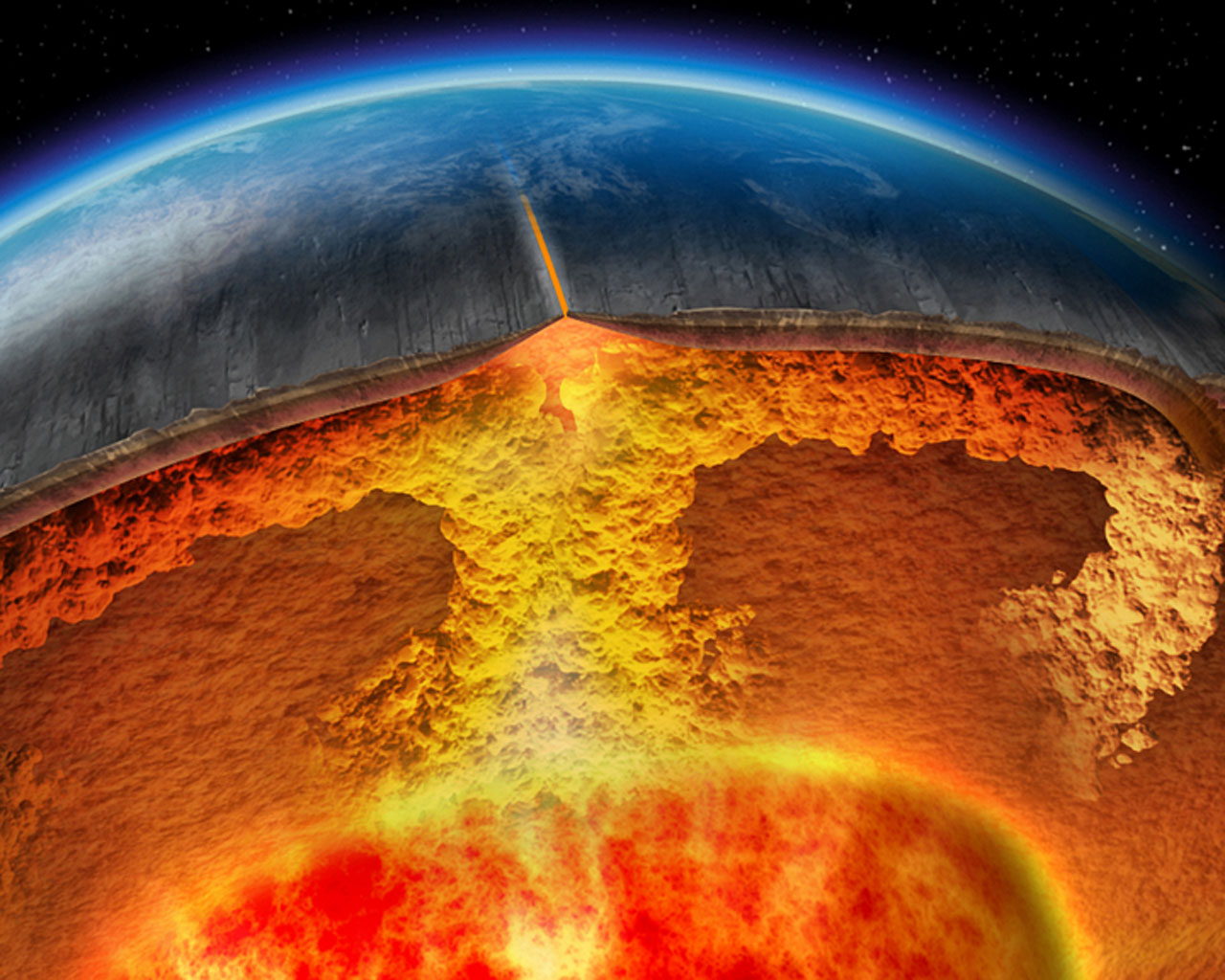 CONSIDERATIONS ABOUT RECENT PREDICTIONS OF IMPENDING SHORTAGES OF PETROLEUM EVALUATED FROM THE PERSPECTIVE OF MODERN PETROLEUM SCIENCE – “ABSTRACT: For almost a century, various predictions have been made that the human race was imminently going to run out of available petroleum. The passing of time has proven all those predictions to have been utterly wrong. It is pointed out here how all such predictions have depended fundamentally upon an archaic hypothesis from the 18th century that petroleum somehow (miraculously) evolved from biological detritus, and was accordingly limited in abundance. That hypothesis has been replaced during the past forty years by the modern Russian-Ukrainian theory of abyssal, abiotic petroleum origins which has established that petroleum is a primordial material erupted from great depth. Therefore, petroleum abundances are limited by little more than the quantities of its constituents as were incorporated into the Earth at the time of its formation; and its availability depends upon technological development and exploration competence.” – Joint Institute of the Physics of the Earth, 1997 via California State University

How Planets Are Born, Die, And Why It Matters… “Every human on Earth is told that crude oil is the byproduct of dinosaurs and plant life that died over 200+ million years ago, and has stored its biological matter in the Earth’s crust to be drilled out by oil companies that tell us that we’re soon to run out.  The truth might shock you, but this is completely and utterly a lie.  Let’s look at the overall composition of crude oil… There are three huge oil reserves largely unannounced to the world public. One is off the coast of northern Alaska, one is off the coast of Brazil, and one is off the coast of Scotland. These three reserves individually comprise mother loads of crude oil larger than all known recorded drilling in the Middle East.” – Learn the Rules that Rule You, Apr. 2012

Deep Carbon: Quest underway to discover its quantity, movements, origins and forms in Earth… “Ninety percent or more of Earth’s carbon is thought to be locked away or in motion deep underground—a hidden dimension of the planet as poorly understood as it is profoundly important to life on the surface, according to scientists probing the world’s innermost secrets in the decade-long, $500 million project.” – Phys.org, Mar. 2013

The Energy Non-Crisis… “Lindsey Williams, who has been an ordained Baptist minister for 28 years, went to Alaska in 1971 as a missionary. The Trans-Alaska oil pipeline began its construction phase in 1974, and because of Mr. Williams’ love for his country and concern for the spiritual welfare of the ‘pipeliners,’ he volunteered to serve as Chaplain on the pipeline, with the subsequent full support of the Alyeska Pipeline Company. Because of the executive status accorded to him as Chaplain, he was given access to the information that is documented in this book.” – Reformation.org

The following three charts are for consideration only and are meant to serve as a reflection of where the overall industry stands as of today’s market close.  The two ETFs, one for oil exploration and production and one for oil, represent the ETFs with the highest daily volume for trading liquidity.  The third is Exxon, since they made a huge announcement on domestic capital investments yesterday. 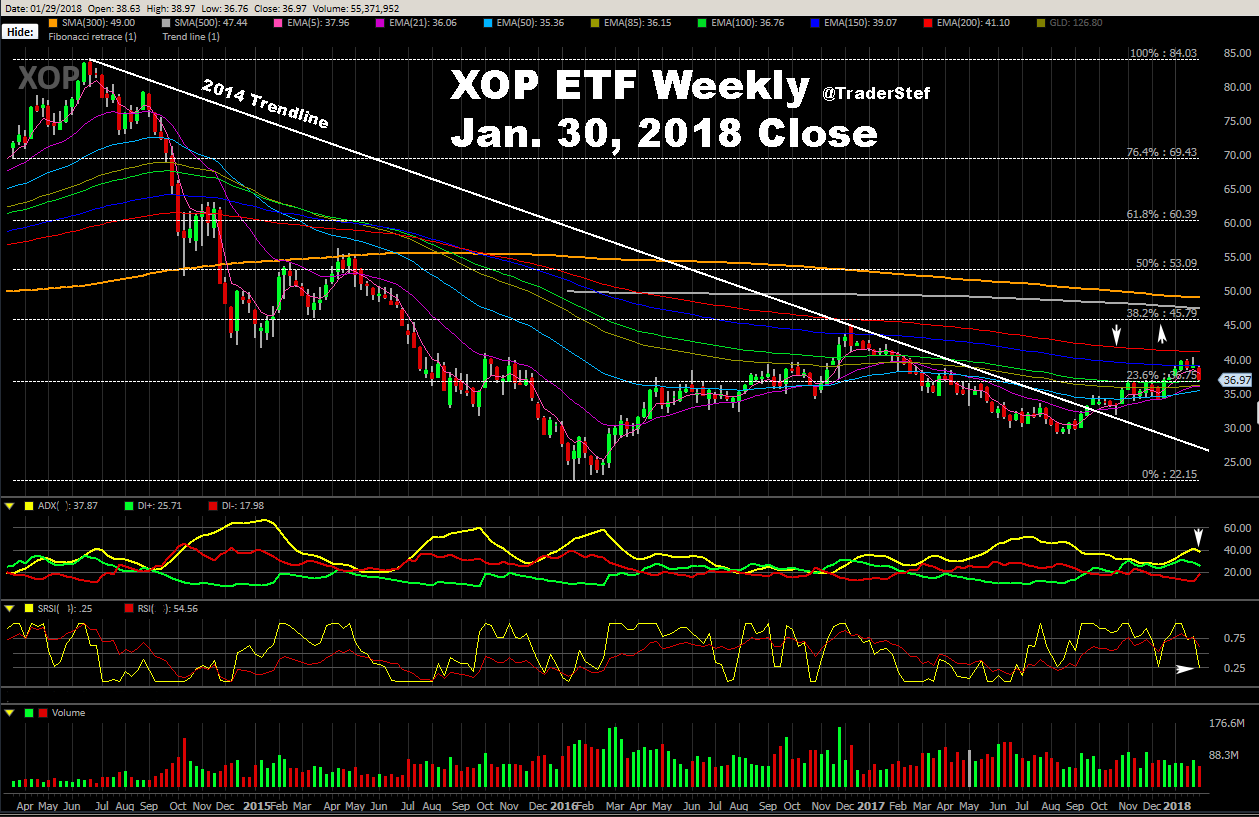 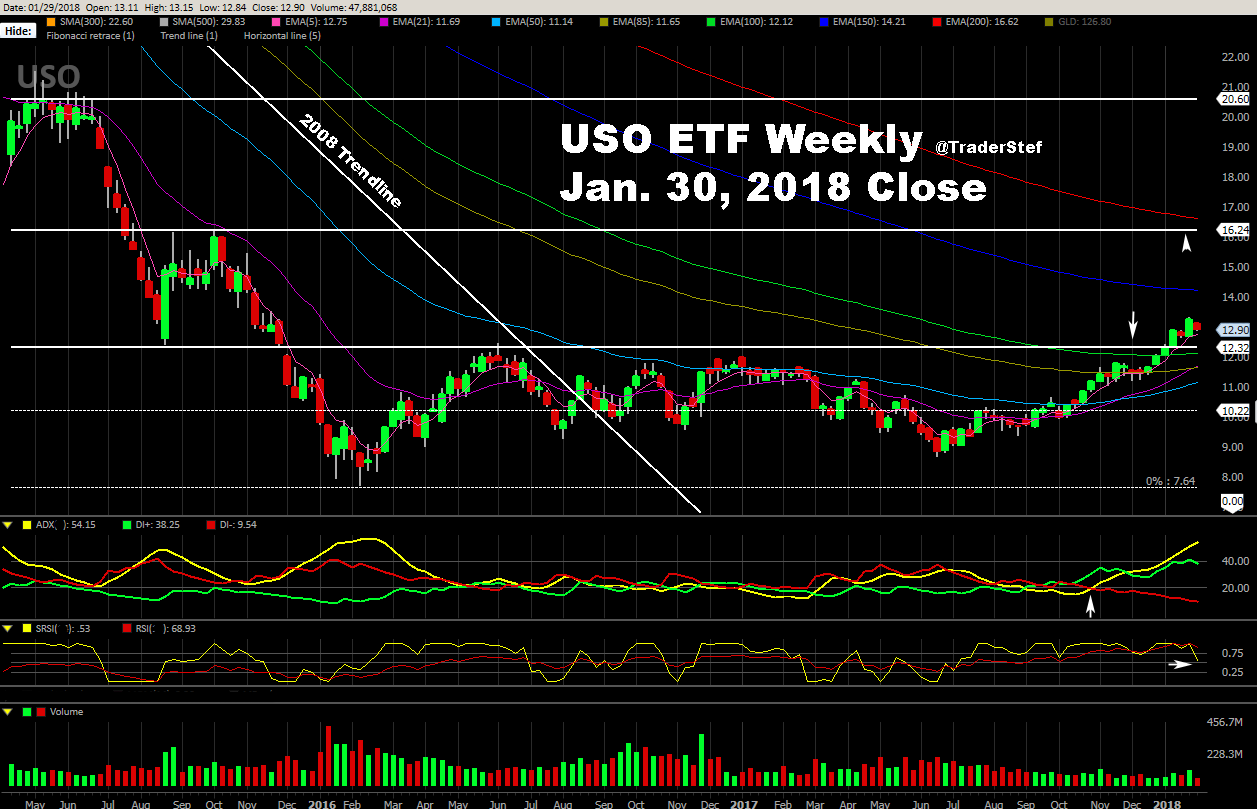 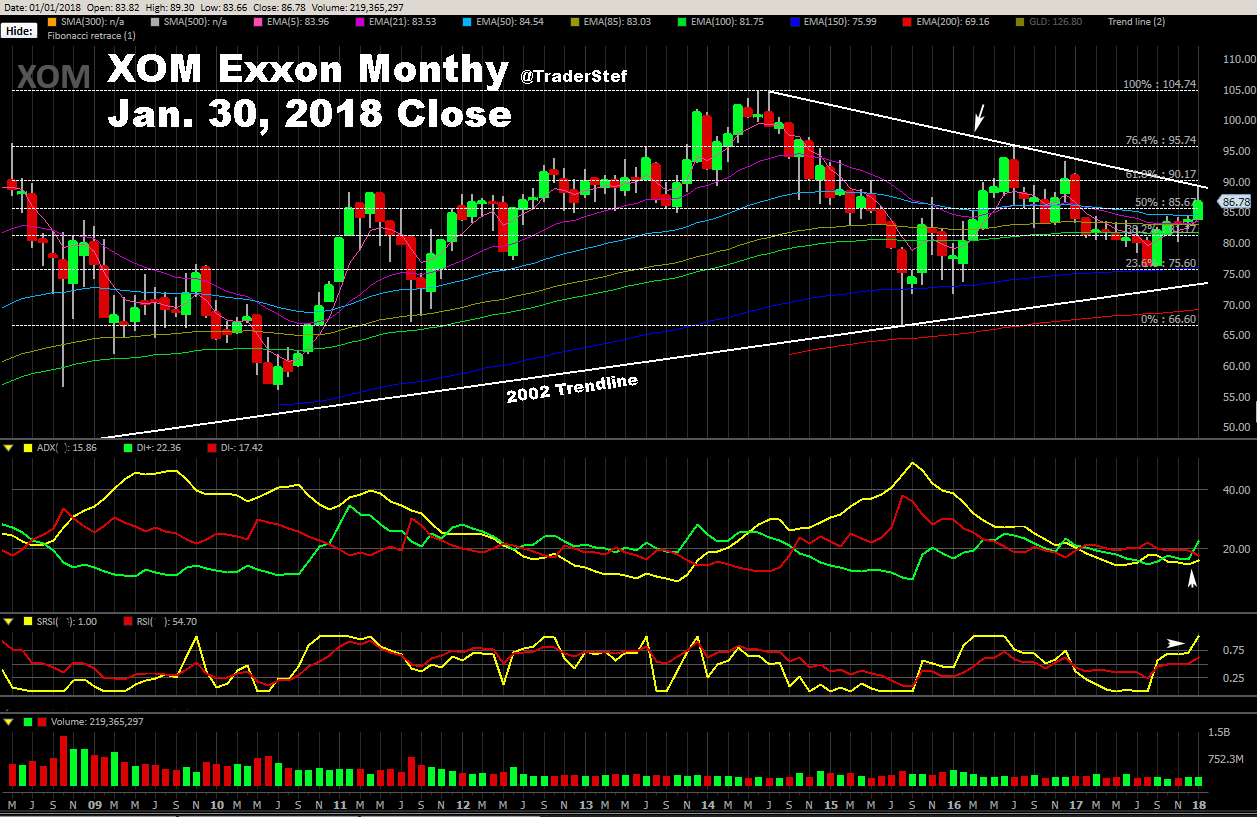