One of the shockwaves that erupted during the second half of market trading last week was Radioshack’s 35-percent closing performance on Friday, February 21st. After filing for Chapter 11 bankruptcy protection earlier this month accompanied by an announcement of the sale of thousands of store locations, a majority of investors rightfully left the embattled retailer for dead. Under the new strategy from upper management, “RadioShack struck a deal with hedge fund Standard General and Sprint (S) , according to a Wall Street Journal report. Standard General will purchase up to 2,400 of RadioShack’s approximately 4,000 stores it operates in the U.S.” (Kawamoto, Dawn. “RadioShack Files for Bankruptcy, Plans to Sell Up to 2,400 Stores“. The Street. February 5, 2015. Web.).

But the magnitude of the most recent ramp-up in Radioshack equities deserve some consideration. First, a plus 30-percent move has not occurred since August 28th of last year. Second, and perhaps more importantly, the accumulation took place under heavy volume, to the tune north of 11 million shares. This was nearly 38-percent higher than the volume from the previous session and 240-percent more than the running three month average. What can account for this massive paradigm shift? Is this a one-off event or an enthusiastic sign of the biggest turnaround in recent corporate history?

Fundamentally, there will always be a demand for assets deemed intractably irredeemable by rational passersby. The Mt. Gox fiasco for the bitcoin sector, where speculative investors bought units of the digital currency for pennies on the dollar, assumed the risk that the company was fraudulently misrepresenting their balance sheet. In a similar vein, investors have apparently gambled that Radioshack will successfully navigate their bankruptcy plan, knowing full well that a failed forecast will leave them with nothing.

Technically, the situation becomes further muddled. With shares having tumbled into the tundra of sub-Washington territory, a shift to the positive of even one-cent can ring up large profitability margins. Using probability methods, a swing-trader can attempt to predict the next move based on what has occurred in previous trades. Unfortunately, there’s not much data to work with considering that Radioshack only recently was downgraded into the over-the-counter (pink sheets) status and even then, shares first hit below one dollar on June 20th of 2014. Contextually, it would be difficult to assume future probability based on data that came from wholly different circumstances. The more convincing argument against trading Radioshack shares comes from variance analytics that plot overall trading sentiment against closing price performance. Since the beginning of 2014, the market capitalization of the retailer continued to hit new low after new low. Trading sentiment was varied during this time, but established a dominant trend that had a conspicuously negative trajectory. It was only until the fourth quarter of 2014 that a new subdominant trend broke away from the standard deviation of the dominant trend. Despite the impressive range of the subdominant trend, its thin frequency is overshadowed by the general bearishness towards Radioshack.

While it is still possible to ring up a profitable trade in the company, the lack of a fundamental base combined with negative sentiment frequency implies that any positions taken is a pure gamble. 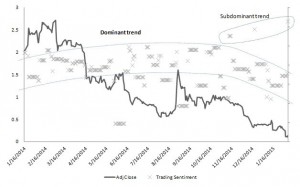 One of the shockwaves that erupted during the second half of market trading last week was Radioshack’s 35-percent closing performance on Friday, February 21st.