As we get ready to ring in a new year, many people will be led to introspection, taking a critical view of past events and solidifying a commitment to personal improvement. Resolutions made without the necessary objective analysis will surely end in failure; after all, what point is there in improving when one doesn’t understand of what needs said improvement? A similar concept can be applied to our financial investment strategies. In order to succeed for the next year and the years following, we must be objective towards what has worked and what hasn’t. One investment mantra that died an ignominiously undeserved death is contrarianism, a tactic that should be avoided if an investor has a modicum of concern regarding capital returns.

By colloquial definition, a contrarian investor goes against the grain, committing capital towards a popular asset’s antithetical alternative and other underserved opportunities. The theory behind the strategy is that the dumb money always chases after the hottest trend, which usually ends in a correction or collapse. In turn, the unknown and unpopular stock or asset rises in valuation as the supply demand dynamic rebalances itself. Contrarianism has worked wonders in the past when market information was mostly limited to Wall Street experts and the average Joe had to pick up the phone and talk to a human being to place an order (the horror!). But with both domestic and international financial data streamed live 24/7 via the internet and business broadcasting outlets, the investment community (ie. the competition) has become far more sophisticated. Nowadays, it’s difficult to tell who the dumb money is, especially when most of them have been wiped out in the 2000 and 2008 market collapses.

Nevertheless, the practice of contrarianism continued to flourish, with Dave Iben of Kopernik Global Investors taking the eponymous gamble on Russia, according to an August 8th, 2014 article from Bloomberg (Fried, Carla. “Why a Contrarian is Betting Big on Russian Stocks“. Bloomberg. Web.). The allure of the Russian bet is impossible to ignore for the contrarian: it’s a hated country (at least by Western standards), it has a reputation for crime and corruption, and most importantly, few “normal” people, rightly or wrongly, would think about investing there. Unfortunately for Mr. Iben, his clients, and anyone that took his advice without mitigation, the Russian economy and its currency market collapsed a few months after the release of the article.

To Iben’s credit, he employed specific fundamental criteria to determine undervalued opportunities. The question, however, is how does one employ fundamental analysis towards an openly corrupt market structure like Russian equities? If American pink sheet companies can’t be trusted (and many of them can’t), what does that say about Russian companies who routinely make up the numbers in the American pink sheet exchanges!? On a more basic level, how can one continue to be a contrarian when the Russian economy is so heavily leveraged towards crude oil, an asset which has recently suffered a death plunge? The technical picture doesn’t lie. Comparing the Templeton Russia and East European Fund (NYSE : TRF) to the ARCA Oil and Gas Index (index symbol: XOI), there is an 80-percent positive correlation from 1995 till the present time. The statistical strength of the relationship increases to 93.2-percent between September of 1995 and December of 2010. This is because inflationary pressures after 2010 contributed to a rise in oil and commodity prices but failed to positively impact the Russian economy despite the nation’s sizable natural resource reserves. It can also be argued that oil prices increased based on speculation of improvement of Western economies due to their unprecedented monetary stimuli but that the same speculation did not benefit Russia because its central bank remained relatively muted. Though Russian policymakers may have taken the high moral ground, they paid the price through the deceleration of capital investment.

But now that the oil market itself has collapsed, the one positive factor for Russia is gone. Rather than an upswing, the Russian stock market faces increased volatility and an aggressive bear market cycle unless there is a dramatic improvement in the oil sector. When 40-percent of government revenue is attributed to oil production, it goes without saying that an unbalanced economy would face severe challenges and should frighten off most investors for very good reason.

In all fairness, contrarianism is not entirely faulty. There are times when it pays not to invest with the crowd. However, a rigorous understanding of why the masses are behaving in a particular manner is of far more importance than simply betting against them for the sake of betting against them. Sometimes, the majority populace gets it right for the wrong reasons, which is better than getting it wrong for the right reasons. 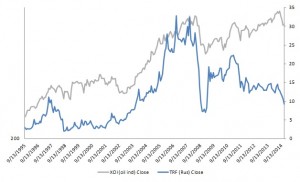 One investment mantra that died an ignominiously undeserved death is contrarianism, a tactic that should be avoided if an investor has a modicum of concern regarding capital returns.