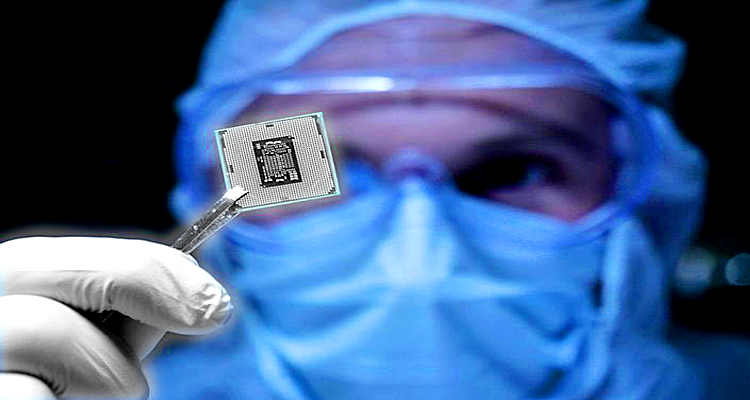 The semiconductor industry is tanking on Wall Street due to a multitude of factors, but the bottom line is that stock market equities are in a bear market and there are very few sectors where investors can hide. Here are a few recent articles related to today’s topic and a brief excerpt from June:

“Given the current supply chain crisis that’s worsening, I think China’s game plan is to blockade Taiwan and shut down its manufacturing and export of semiconductor microchips. The U.S. is in the process of expanding its fabrication capacity on U.S. soil and Taiwan Semiconductor Manufacturing Company (TSMC – $TSM) is participating in that process by building a manufacturing facility (FAB) in Arizona… If the U.S. microchip supply chain from Taiwan was cut off in the near future, our country would be dead in the water. We should exercise diplomacy with China and Russia or a world war will leave us all living among sticks and stones. Connecting all the dots above led me to the following: China is urged to seize TSMC if the U.S. ramps up sanctions… ‘If the US and the West impose destructive sanctions on China like sanctions against Russia, we must recover Taiwan.’” – TraderStef, Jun. 9

In late August, the U.S. implemented sanctions that restrict the flow of semiconductor technology to China. These were added to restrictions imposed by the Trump administration, but more on that later. As a follow-up to the potential for neon gas supply issues covered in May, Russia began limiting its export of noble gases in June, then China halted exports of “natural sand” to Taiwan that’s required to make silicon for the manufacturing of wafers in retaliation to Nancy Pelosi’s trip to Taiwan.

Russia limits exports of noble gases, a key ingredient for making chips…  “Russia accounts for 30% of the global supply of three noble gases – neon, krypton and xenon… Sanctions-hit Russia has limited exports of noble gases such as neon, a key ingredient for making chips, until the end of 2022. Russia’s export curbs could worsen the supply crunch in the global chips market. Ukraine was one of the world’s largest suppliers of noble gases until it suspended production at its plants in the cities of Mariupol and Odesa in March… The move will provide an opportunity to ‘rearrange those chains that have now been broken and build new ones,’ Deputy Trade Minister Vasily Shpak told Reuters… Taiwan, the world’s leading producer of chips, imposed curbs on exports of this product to Russia after Moscow sent thousands of troops to Ukraine on Feb. 24.” – Reuters, Jun. 3

Since May 2022, substantial progress is being made to increase FAB capacity in the U.S. so we can return to self-sufficiency on the microchip front. Advanced silicon technology originated in the U.S., but roughly 80% of the market share is now supplied by Asia, and estimates put the U.S. market share at 15% vs. 37% in 1990. 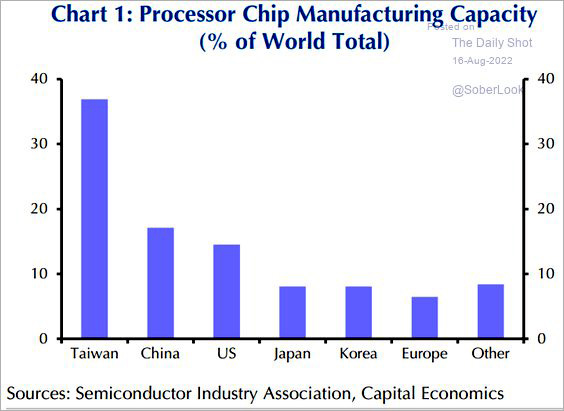 TSMC has committed to invest $100 billion over three years to increase production and is building a $12 billion FAB in Phoenix, Arizona. The Phoenix plant will begin production of 5-nanometer chips and will create 20,000 wafers per month by 2024. Completion of the Arizona FAB is a national security priority to secure a “resilient supply chain” as China threatens to pull the trigger on a Taiwan invasion via blockade, take control of TSMC, and restrict exports to the U.S. TSMC also announced that it will soon start ultra-advanced 3-nanometer chip production despite supply chain struggles. It also plans to start mass production of its SoIC 3D chip stacking technology in microchips by the end of 2022. 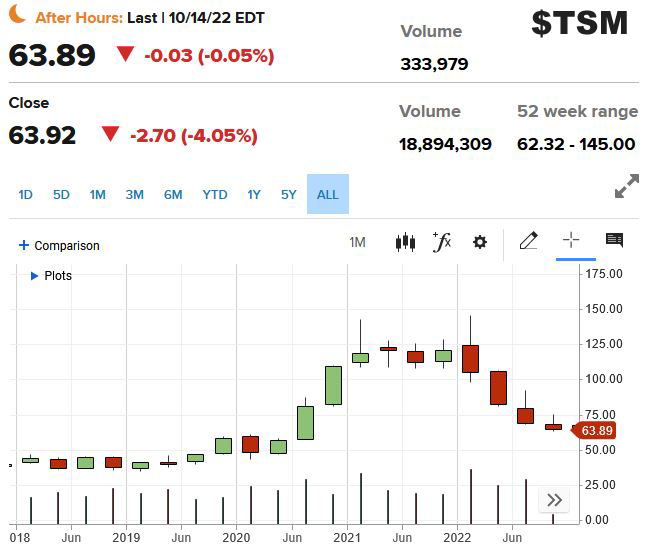 In early October, Micron Technology announced that it plans to invest up to $100 billion in a mega complex of computer chip plants (aka FABs) in Syracuse, New York, with up to four separate FABs in phases. It is being touted as the largest single private investment ever made in New York history. The manufacturing hub is projected to create up to 9,000 jobs over the next 20 years and bring an additional 40,000 supply chain and construction jobs to the Syracuse area. On Sep. 9, Intel celebrated breaking ground on two of the world’s most advanced FABs in the “Silicon Heartland” of Ohio. The planned $20 billion investment is expected to generate 7,000 construction jobs and 3,000 positions in the manufacturing and engineering of advanced semiconductors. Intel also recently celebrated the grand opening of the latest expansion of its leading-edge developmental factory in Oregon.

The bearish sentiment and severe downturn in semiconductor stocks are attributable to many reasons, but markets are considering the risk of a global recession taking hold, and export restrictions implemented by the Biden administration are seen as an “economic war” by Asian analysts.

A standing U.S. order to ban exports of advanced chips to China will impact all major technology companies that run public clouds or artificial intelligence (A.I.) modules. Nvidia Corp. was notified in early September that U.S. officials told it not to export two of its top computing chips for A.I. to China. Advanced Micro Devices (AMD) received new license requirements that halt its advanced A.I. chips from being exported to China. China is obviously not happy about it because technology giants like Alibaba, Tencent, Baidu, and Huawei will all take a hit. Instead of just blocking certain companies from providing products to specific companies (such as Huawei), the U.S. is implementing a ban on the selling of products and technology to all of China.

‘No Possibility of Reconciliation’ as US Slams China Chips… “The Biden administration’s new restrictions on technology exports to China could undercut the country’s ability to develop wide swaths of its economy, from semiconductors and supercomputers to surveillance systems and advanced weapons… Depending on how broadly Washington enforces the restrictions, the impact could extend well beyond semiconductors and into industries that rely on high-end computing, from electric vehicles and aerospace to simple gadgets like smartphones… The two countries are now officially in an ‘economic war,’ Dylan Patel, chief analyst at SemiAnalysis, said. A Chinese analyst said there is ‘no possibility of reconciliation’ any longer. ‘This is the US salvo against China’s efforts to build its domestic tech capabilities,’ said Patel, who estimates the restrictions could reduce global technology and industry trade by hundreds of billions of dollars. ‘It’s the US firing back, making clear they will fight back.’” – Bloomberg, Oct. 10

A global recession is beginning to take hold as the Federal Reserve’s hawkish monetary policy spikes interest rates and strengthens the dollar, which is fomenting a liquidity crisis and the potential for sovereign debt defaults. “Slower economic growth and faster inflation are to blame as the number of countries at high risk of debt distress is increasing.” The IMF chimed in this week with warnings that the “worst is yet to come” since steps that central banks are making to slow inflation are increasing risk. Chip makers are clearly taking the brunt of this from numerous directions and are slashing forecasts more than expected with an accelerated decline in PC sales that drives sentiment even more negative. AMD has tried to put a happy face on its business that’s not so tied to PC sales, but the news is also bad for the rest of the semiconductor sector, especially its biggest rivals in the PC business.

No matter what silver lining analysts mention to lessen the blow to semiconductor sentiment, I wouldn’t recommend bottom-picking at this time. Eventually, something major will break in the global economy and central banks will be forced into a dovish policy stance to stop raising interest rates. That might be a good time to put some capital to work if the world avoids WW3.

‘Decimated’ chip stocks, some closing in on bottom – CNBC, Oct. 11