Today’s headline was written six months ago for Part 1, and at that time the fundamental picture and technical analysis dynamics of U.S. stock market indices were telegraphing potential trouble ahead. I recommend that you read Part 1 from December in full along with the following excerpt:

“I published a risk overview (‘caution is warranted in this scalping environment, and layering large long-term positions is not recommended at this time’) on Oct. 12 and listed several issues that had the potential to impact financial markets and the Fed’s Taper Caper decision process. One issue was overleveraged real estate development in China, and Evergrande was ground zero for global contagion if a major debt default on bond obligations was not mitigated by the Chinese Communist Party (CCP). During an interview on Nov. 7, I connected several talking points to how all was not well in China and Evergrande’s debt problem may lead to a financial crisis. The Federal Reserve published its Financial Stability Report on Nov. 8 and noted risks related to Evergrande and its exposure in crypto markets… The bitcoin-tether price action has plunged 39% from its 69k high on Nov. 21, with a 27% flash crash on Dec. 3-4 that printed this weekend’s 42k low. Several analysts noted that Stablecoin-Tether has enormous exposure to Evergrande and any hint of additional distress in China’s real estate debt market could result in a crypto crash… arguments that cry incessant manipulation by government agents or banker boogeyman are more of a Trojan horse than ever before. The enormous elephant in the room is automated trading platforms.” – TraderStef, Dec. 5, 2021

The price action in U.S. stock market indices and the majority of financial assets have been highly volatile, inflationary since Biden took over the White House, or fell into a bear market downtrend since late 2021. Consider reviewing “Dow, Nasdaq, S&P, and Russell for Spring 2022 – Part 2,” published on May 24. The last few weeks and today’s price action in the indices confirm my concerns in May that the studies and technicals were “indicative of more weakness that may lead to another stairstep down.” Not only have the stock markets been in a downtrend since late 2021, but Bitcoin also trended downward with bouts of extreme volatility along the way.

“A lot of investors sell narratives like: ‘Bitcoin to the moon,’ ‘Tech is secular growth,’ ‘Stocks for the long run.’ Stop it with this crap. Be Macro aware.” – HedgeEye, Jun. 13

I suspect that a confirmation in early June from Citi that Evergrande defaulted on its debt was a major trigger for the extreme plunge in Bitcoin and its cryptocurrency relatives this month. I don’t have definitive contagion data that links Evergrande’s default to the stock market rout in recent days, but publicly available information appears to point to the crypto market. Anyone that buys an asset that literally doesn’t exist should reexamine their motives and so-called fundamental reasoning that’s risking capital (aka HODLR) vs. being honest with yourself, practicing good risk management, and trading crypto sweet spots as a speculative adventure.

Evergrande bankruptcy cover-up claims as more debt deadlines loom… “As the China Evergrande Group scrambles to offload corporate jets, luxury property and business units in what appears to be a fire sale to meet debt obligations, one respected financial analyst has suggested a cover-up of monumental proportions could be underway.” – asiaMarkets.com, Nov. 2021

Evergrande bondholder: I will never see my money again… “Dr Marco Meltzer, a respected German financial analysts and outspoken critic of the handling of Evergrande’s debt crisis, says he received a letter from Citi earlier this week all but confirming the company is broke. Citigroup serves as a paying agent for a number of Evergrande’s offshore bonds. Paying agents are intermediaries which accept payments from bond issuers and distribute the funds among the bond holders. ‘Just this week, I received an official letter from the agent Citibank that Evergrande has defaulted on our bond and I will never see my money again,’ said Dr Meltzer. ‘As you know, I had bought bonds last year in November to see if the media coverage of the real estate giant was accurate, as they repeatedly reported that Evergrande was doing well. Unfortunately, it appears this media coverage is taking its course.’ Meltzer shared a copy of the letter (published in the feature image of this article) which states Evergrande and its Subsidiaries ‘have not made payment of interest that was due and payable on April 11, 2022’”. – asiaMarkets.com, Jun. 5 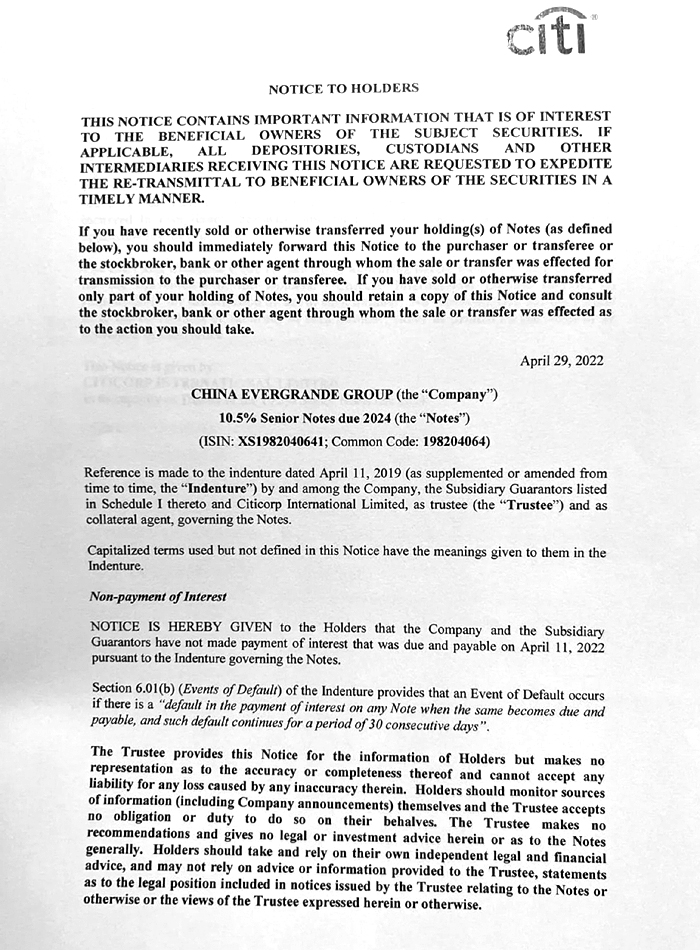 The most recent plunge in crypto began last week on Jun. 7. I don’t believe for a minute that Tether’s 78% exposure to Evergrande is a coincidence with Bitcoin’s losses in the last few weeks. Large chunks of capital are likely being intermittently sold to eliminate exposure to fallout from Evergrande’s debt default process. 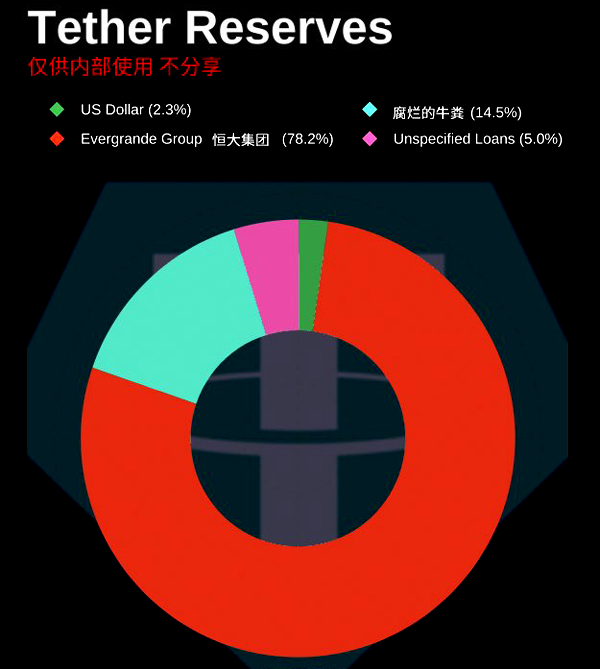 “Celsius Network. Only took 24 hours for CEO to lie and then blow up. Where’s the SEC?? And how is Tether still alive?” – @agnostoxxx, Jun. 13

Celsius sends shockwaves through crypto industry after pausing withdrawals, transfers amid ‘extreme market conditions’… “Crypto lending platform Celsius Networks LLC sent shockwaves through an already rattled digital asset market to start the week, with news that it was pausing all withdrawals, swaps and transfers between accounts, ‘due to extreme market conditions. We are taking this action today to put Celsius in a better position to honor, over time, its withdrawal obligations,’ the New Jersey-based company said in a statement on Sunday… Celsius is one of the largest crypto lending companies in the world, at one point claiming more than $20 billion in assets” – MarketWatch, Jun. 13

Terra Stablecoin Meltdown Spurs Investor Suit Against Binance… “Binance.US was sued by an investor in TerraUSD who claims the cryptocurrency exchange flouted federal regulations, with ‘disastrous consequences’ for its customers when the stablecoin crashed last month… TerraUSD was meant to maintain a 1-to-1 peg to the US dollar through an algorithm and trading in a related token called Luna… The suit comes as bitcoin, the world’s largest digital token, fell to its lowest value in a year and a half, amid a broader cryptocurrency sell-off.” – Bloomberg, Jun. 13

Binance paused bitcoin withdrawals for several hours Monday due to a ‘stuck transaction’… “At first, Binance founder and CEO Changpeng Zhao said in a tweet that the issue would be resolved within 30 minutes. But he later amended that to say, ‘Likely this is going to take a bit longer to fix than my initial estimate.’ Around 11:30 a.m. ET on Wall Street Binance said bitcoin withdrawals had resumed.” – CNBC, Jun. 13

Tether is a blockchain-based crypto that’s supposedly pegged to the U.S. dollar and considered a “stablecoin” that can be used for leverage. I don’t invest in cryptos and don’t care how it’s supposed to work. I do know that when an asset or equity is tied to the hip with assumed stability and counterparty risk of 78% is looming from a bankrupt entity, illiquidity will eventually boil to the surface and spring a major leak. The poor economic data that’s dominating financial headlines does not help, and automated trading platforms are more than willing to crush your portfolio in a nanosecond. I suspect the Evergrande default announcement via Citi launched an institutional scramble for liquidity and safety from leveraged positions that were exposed to Evergrande. Touché.

Let’s move on to a technical analysis of the Bitcoin/Tether chart. To view a larger version, right-click on it and choose your “view image” option. 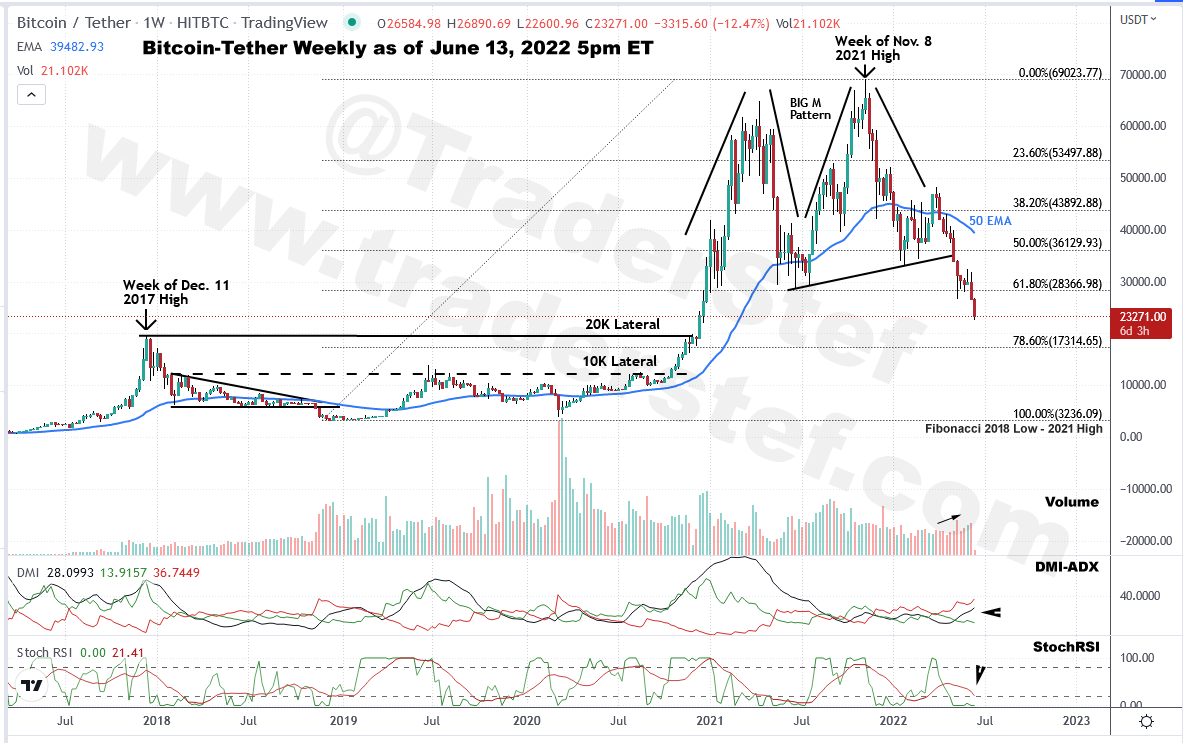 Bitcoin has plunged 69% from its November 2021 high of 69,024. The pattern that dominated the chart until the first week of May was a bearish Big M drawn back to late 2020. After 35k was breached at its lower trendline, the price action held above the 61.8% Fibonacci around 28k until it was decisively taken out last week. As of 5pm this afternoon, the price was at 23,271 and has fallen to 22,400 as I type this analysis. There is nothing bullish about the chart. Bitcoin will likely see several more Dead Cat Bounces within shorter timeframe candlesticks while approaching the 20k lateral from late 2020. There are weak hands just below the 20k level until the 78.6% Fibonacci at 17,315, and stronger hands from late 2017 might provide some support between 17k and 10k.

The DMI-ADX is in a classic power trend Alligator Tongue setup for selling, the StochRSI is in oversold territory and more downside appears likely, and sell Volume is rising with the falling price action and that’s indicative of further downside. The chart is bearish and the gambler’s game of Russian Roulette is almost over.

My bitcoin project ended at the high in April 2021 and can be viewed here.