It was inevitable that the regressive policies, moratoriums on energy production and infrastructure, and executive orders the Biden administration implemented after taking the White House would bring inflation to the gas pump. The heydays of “A Return of the Black Gold Rush” (Twitter thread) with U.S. energy dominance from the Trump administration and “The Black Gold Oil War” in Mar. 2020 were clearly coming to an abrupt end. The price of oil and gasoline immediately began its ascent from $37 per barrel on election night of Nov. 2020, and rapidly returned to the $50-$60 zone that existed prior to the pandemic-panic and crashed world financial markets in Mar. 2020. I penned “The Inflationary Black Gold Rush at the Gas Pump” (Twitter thread) in Feb. 2021, and that analyses has proven to be prescient. I suggest readers review the articles linked above and note this brief excerpt from February:

“President Biden and his cohorts have rammed through an unprecedented 52 executive orders and actions within the first three weeks of occupying the White House. U.S. ‘energy dominance’ that was brought to fruition with pivotal policies and a reduction in regulation by the Trump administration is going poof as the new dictator and chief strokes his pen. The price of oil and gas at your local petrol pump is already rising and the cost of consumer products across the board will be impacted soon. Biden’s actions are wiping out well-paying jobs at a time when the country needs to keep the economic ship afloat… Gas and energy prices might skyrocket later this year or next due to Biden’s policy actions.”

The price per barrel for WTI Crude Oil during the Nov. 2020 election was a meager $37 and reached a high of $85 last week, which amounts to a whopping 130% in one year. In my neck of the woods of New England, the price per gallon of 93-octane unleaded gasoline required for my car has spiked from roughly $2.40 per gallon to $3.85. In the small town of Gorda, California consumers were forking out $7.60 for regular and $8.50 for super in late October. 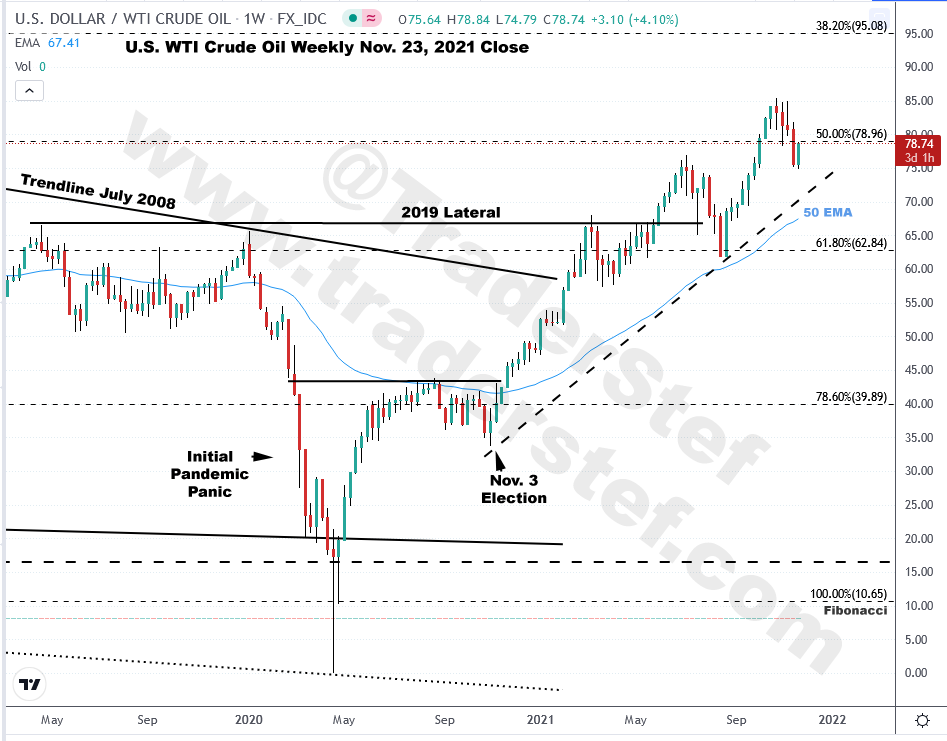 The asymmetric inflation we’re experiencing was pointed out in a chart posted on Bloomberg yesterday, but significant increases in the price of energy eventually lead to consumers footing the bill in everything you purchase. The worsening supply chain crisis in the transportation of goods across the world adds to the inflationary slap in the face when visiting your local gas station, grocery chain, and retail outlet for durable goods. 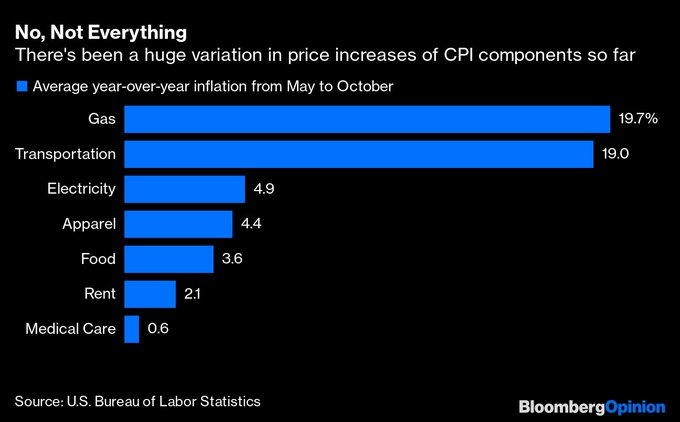 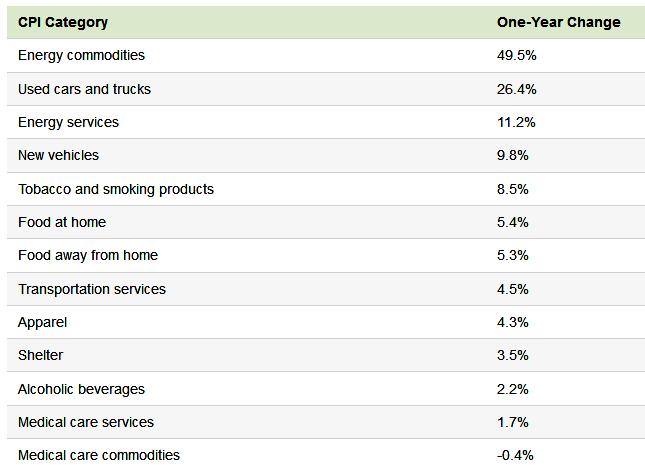 Even Dollar Tree had to increase its $1 base price to $1.25, and that punch in the face impacts the low-income tranche of society much more than the middle class.

Results for the Third Quarter Fiscal 2021… “The $1.25 price point, which will apply to a majority of Dollar Tree’s assortment… The Company will have greater flexibility to continue providing incredible value that helps customers get the everyday items they need and celebratory and seasonal products. Additionally, this new pricing strategy enables the Company to reintroduce many customer favorites and key traffic-driving products that were previously discontinued due to the constraints of the $1.00 price point. The new price point will enable Dollar Tree to return to its historical gross margin range by mitigating historically-high merchandise cost increases, including freight and distribution costs, as well as higher operating costs, such as wage increases.” – Dollar Tree, Inc., Nov. 23

Biden’s Energy Secretary sounded clueless with her not-so-strategic solution at today’s press conference and was unaware of how many barrels of oil the U.S. consumes per day. Her focus was on the future of renewable energy by throwing around trillions of “Build Back Better” dollars and short-term foolishness instead of reestablishing our energy dominance right now with what we have. The Biden administration is still living in a Green New Deal bubble of nonsense. If you can get past the feckless brown-nosing right out of the gate, it’s worth 20 minutes of your precious time to scrutinize the question-and-answer session.

Before the 2020 election and as recently as Sep. 2021, Biden and his congressional allies set their sights on the oil and gas industry as being responsible for any and all climate issues. The House Oversight Committee notified the largest U.S. oil companies that they were under investigation for disinformation on the climate changing. So, Biden initially implemented moratoriums by executive order that restricted drilling, shut down pipelines, eliminated good paying jobs in a pandemic economy, and reduced domestic energy supply along with infrastructure, then blames the capitalists for a climate science project whose data is not manifesting as expected and shipping is unexpectedly frozen in the Northern Sea Route. That kind of poor risk management does not incentivize energy companies to be helpful with developing resources in a pinch. Then Biden repeatedly begged OPEC to increase oil production after short-circuiting the nation’s economy with a stroke of the pen for a country that was energy independent less than a year ago. Brilliant.

When OPEC said to take a hike and pump your own oil, Biden made a decision to release 50 million gallons from the U.S. Strategic Petroleum Reserve (SPR) for a short-term supply boost. The U.S. only uses 18-20 million gallons a day. Brilliant.

Oil prices rallied this morning following the official announcement on the SPR release, and is slated to parallel much smaller releases from other major energy-consuming nations that include China, India, Japan, South Korea, and the UK. The oil market rallied because it already priced in the expected SPR release with a shallow price retracement last week. A one-off sale from the SPR will not do much to reduce oil prices for any significant period of time. The issue is a lack of production from existing resources. Creating more debt for a dream that is beyond the $30 trillion already owed is not a solution.

The Commodities Feed: Oil stock release imminent… “There is a growing risk that OPEC+ responds to an SPR release by pausing planned supply increases. A resurgence of Covid-19 in Europe coupled with a potential release may be reason enough for the group to decide against a production hike of 400Mbbls/d when they meet in early December. The prospect of retaliation from OPEC+ does leave the potential for further volatility in oil markets.” – ING, Nov. 23

Biden oil reserve release an ‘ineffectual band aid’ that won’t replace domestic production… “Of the 50 million barrels, 32 million will be released, but eventually returned to the Strategic Petroleum Reserve in the next few years, the White House said. The remaining 18 million barrels are part of a sale that Congress has already authorized… ‘America’s real strategic petroleum reserve is in places like the Permian Basin and the Gulf of Mexico. The Department of Energy’s reserve should only be used for supply disruptions,’ Christopher Guith, senior vice president of the Chamber of Commerce’s Global Energy Institute, said in a statement Tuesday. ‘Instead of ineffectual band aids, the White House should focus on policies that will encourage domestic production of oil and natural gas… Rather, all the Administration has done is threaten energy production on federal lands, cancel pipelines and beg Saudi Arabia and Russia for more oil.’” – Fox News, Nov. 23

A pandemic of the vaccinated is about to blow up on the world’s stage with the potential to cause a dark winter scenario that reduces energy demand overall. One example is what’s happening at hospitals in Minnesota. Are we on the precipice of a deflationary depression? Only time will tell. And keep in mind that numerous geopolitical fires are also brewing on the planet with China vs. Taiwan and Russia vs. Ukraine & NATO, and would throw an unexpected monkey wrench into everyone’s analyses.