Where’s the Price of Beef and “The Cowboys”

A bomb cyclone with blizzard conditions and flooding devastated large sections of U.S. Midwest farmlands and ranches in March, and it might cost you more at the grocery store or butcher. The price for beef products are expected to rise 50 cents per pound and pork as much as $1 in the near-term. Any additional increase depends upon the final tally on the devastation. The flooding in the Dakotas, Nebraska, and Iowa caused enormous losses thus far. Total agricultural losses in Nebraska topped $1.4 billion, and possibly $1.6 billion in Iowa. Early reports estimate that at least one million livestock perished in the floods.

Midwest flooding has killed livestock, ruined harvests and has farmers worried for their future – CNN, Mar. 27

The impact on grains for products such as cereal are expected to be negligible due to ample storage from last year, and most manufacturers will likely eat a few pennies rather than pass it on to consumers at this time. However, if unseasonable weather and flooding continue through spring, expect a greater impact and a price rise at your grocery store.

Grain Stocks Surprise, Acreage Report Underwhelms… “These are March 1 numbers and a lot has changed with flooding and the economies of things…  Corn stocks jumped to 8.6 billion bu., down 3% from this report last year. Either feed use declined, or USDA understated the size of the 2018 crop… Soybean stocks hit a record 2.72 billion bu.—a whopping 29% jump from March last year. Wheat sings the same tune and increased 6% from last year to 1.59 billion bu. all wheat stocks. The planting intentions report is likely inaccurate, adding to uncertainty. Even with the planting report showing a lower soybean number—84.6 million bu., soybeans still look rough in 2019.” – AgWeb, Mar. 29

If there is a positive aspect to the disaster, it is due to the tremendous amount of farmland and ranchland across the nation. When a disaster strikes in the central part of the country around the Missouri River basin, the rest of the country cushions the impact. Cow and pasture lands account for 41% of total land use. It will take two months to assess the extent of the damage to some of the most important crop growing and ranching regions. Farmers still need to determine how much grain storage is lost, how many planted or empty acres of land are salvageable for the 2019 growing season, and ranchers need a final tally of how many animals perished.

Here are a two maps that provide a visual of land use across the country.  To view a larger version of either chart, right-click on it and choose your “view image” option. 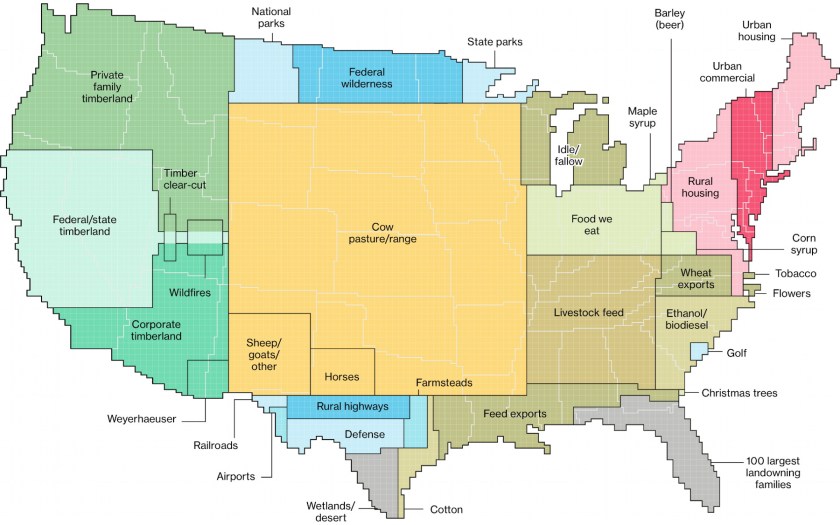 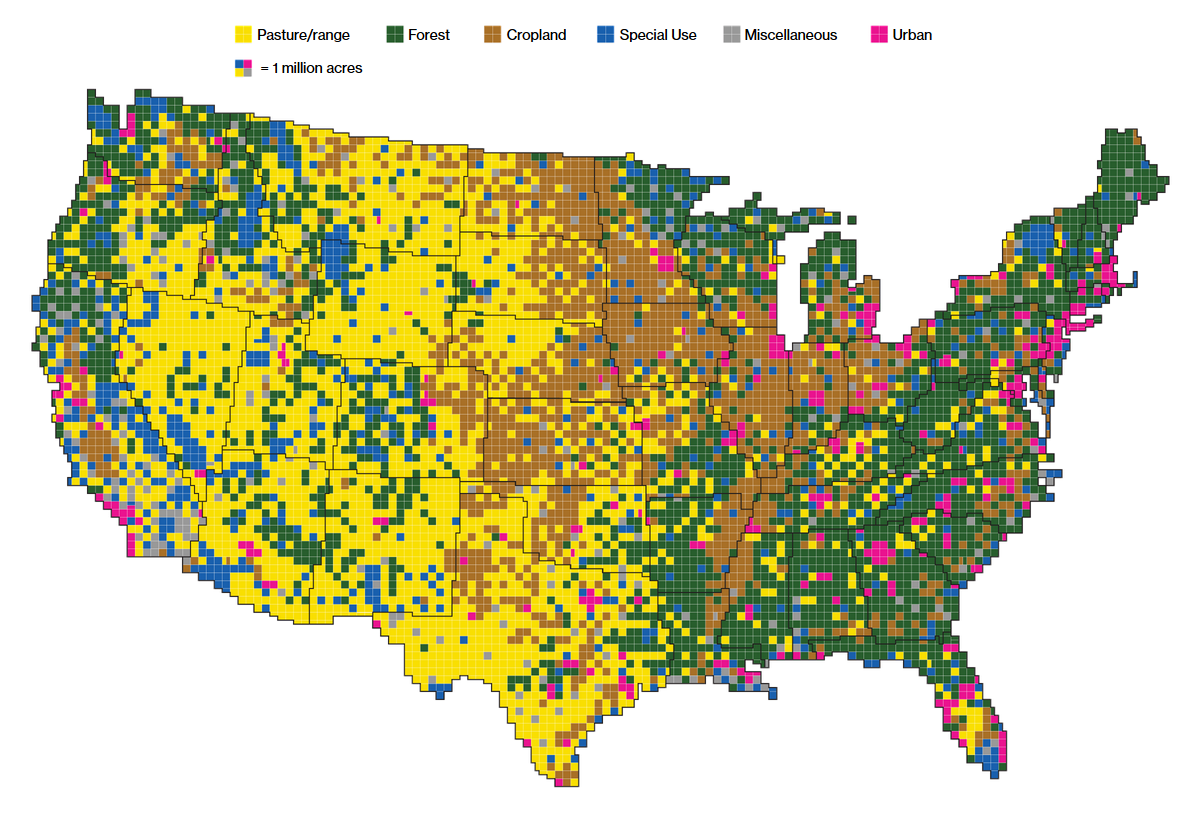 The human toll is the real tragedy in this story. The economic toll adds more stress to communities that were already having difficulty, and this is another natural disaster this year that will negatively affect the U.S. economy.

Midwestern farmers devastated by uninsured flood losses… “Hundreds of millions of dollars in crops destroyed in Midwestern floods this month were not insured, farmers say. And the losses could leave many without sufficient income to continue farming.” – UPI, Mar. 29

Flood damage to Midwest farmland and livestock could be in the billions – CBS, Mar. 21

Roads, towns and livelihoods are washed away in Midwest floods – PBS, Mar. 22

Nebraska is an important feedlot state, with 2.6 million head of cattle on feed as of Mar. 1, 2019. That equals 22% of the total national feedlot inventory. If Nebraska lost 1 million head of cattle, that is a roughly 15% loss across the board. The futures have already had a price rally over the last two weeks, and they pulled back this week. Coincidentally, the 15% rough estimate equates to the recent price rally. There are varying opinions on what to expect with beef and pork prices in the near-term.

Cattlemen Wonder If Spring Highs Are In… “Cash fed cattle prices drifted $2 to $3 lower for the week, leaving cattlemen facing the reality the spring highs may have been posted. Cash prices in the south were $125 to $126, with prices in the north at $126 to $127. Cattle on a dressed basis sold at $206. Feeder cattle and calves were called steady to $5 higher at auctions across the nation by AMS reporters.  Despite this week’s retreat, some feeders believe cash prices could still make a run at a new high in April due to the declining carcass weights. Analysts see signals in the futures market that will prevent such a rally. Specifically, after an almost year-long uptrend in the weekly charts, CME live cattle futures topped last week and have begun the next leg of what some see as a long-term bear market.” – AgWeb, Mar. 29

Livestock could benefit from a possible global meat shortage… “Hog feeding in China is down at least 30%, which is equal to the number of hogs we feed in Canada, Mexico, U.S. and Brazil in a year. There is a meat shortage globally of 12.3 million metric tons if we’re right on the 30% reduction. It could be higher than that if disease is worse than forecasted. Beef could benefit from this shortage and increased demand, too. The Chinese have increased beef consumption.  I am cautiously optimistic. This could hit during the summer time frame, so the next six- to 12-weeks.” – AgWeb, Mar. 29

The following three charts are the futures data as of today’s close of business. Note that feeder cattle are weaned calves that were just sent to the feedlots (about 6-10 months old), and live cattle are cattle that have attained a desirable weight (850-1,000 pounds for heifers, and 1,000-1,200 pounds for steers) to be sold to a packer. The packer slaughters the cattle and sells the meat. Feeder cattle and lean hog futures indicate an increase in price by this summer. 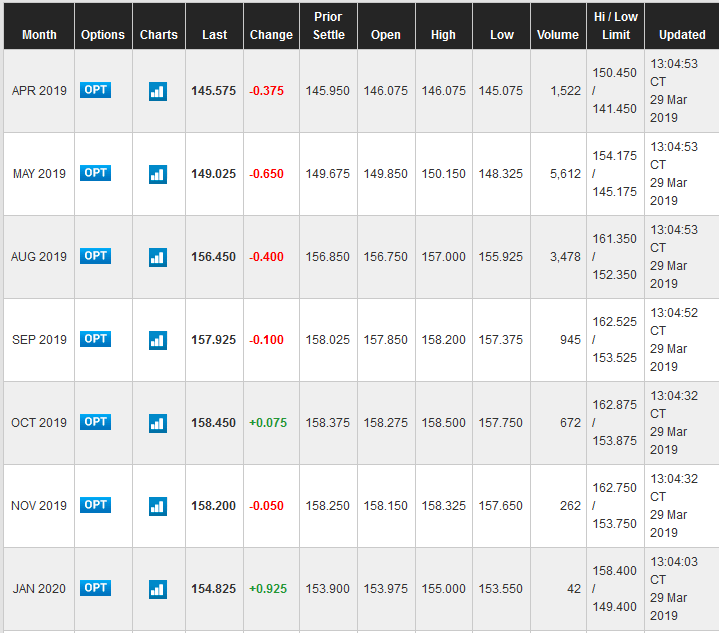 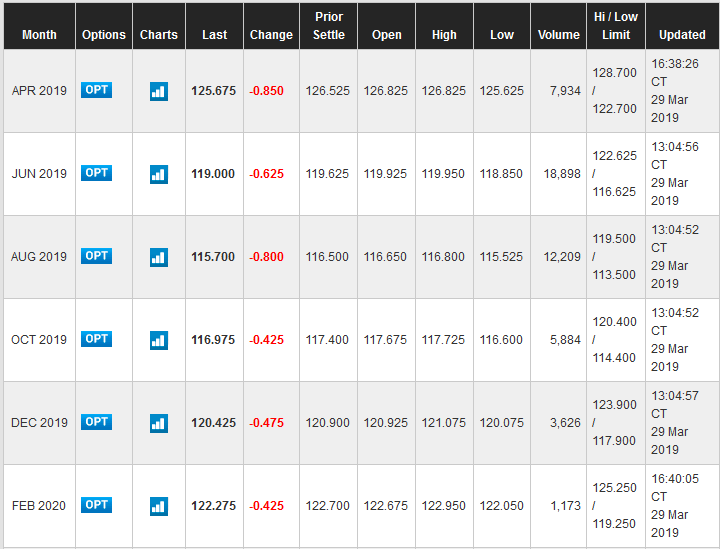 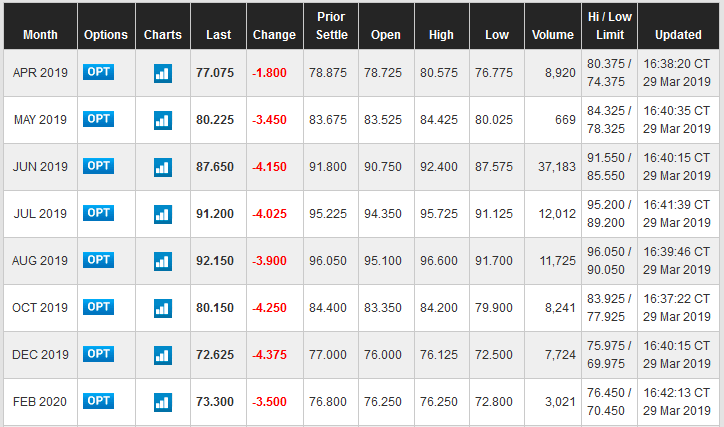 A new ETF to consider if beef and pork rally again is COW, which tracks an index of lean hog and live cattle commodity futures contracts. The volume is thin, but it may pick up in a worthwhile rally. Note that COW rallied 10% from the initial weather reports up until the Mar. 22 high of 54.64. It has since pulled back, with a close at $50.86 today. 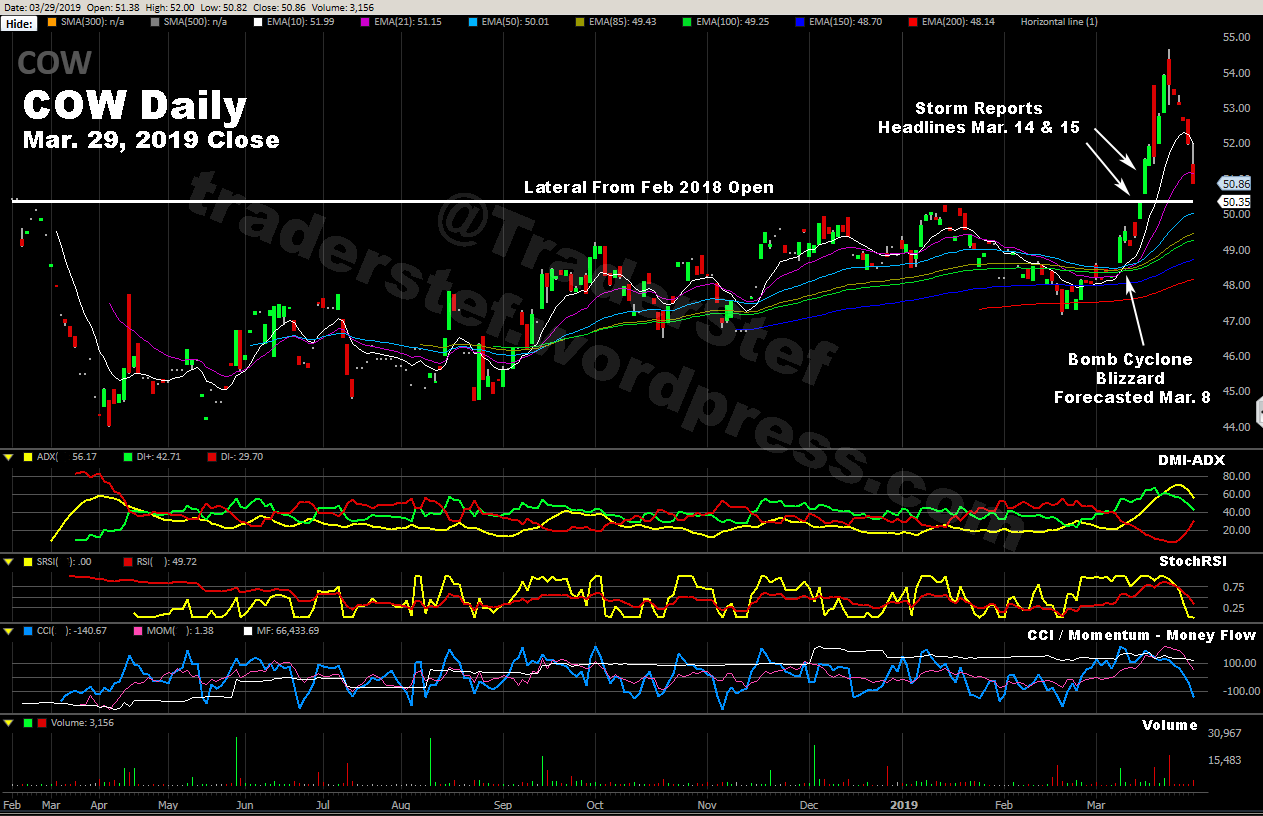 Where’s the Beef and “The Cowboys”

Where’s the Beef and “The Cowboys”