The 2020 Election Will Be Great for Gold, No Matter Who Wins

The implications of the upcoming November 2020 presidential election will reach far beyond politics. For traders and investors, all asset classes will be affected and the time to start preparing and positioning yourself is now.

Whoever ends up opposing Trump in 2020 will have a radically different idea of how to run the country; no one is denying that. This might lead us to believe that the gold market will be impacted very differently, depending on whom is elected. However, I propose that the price of gold vs. the U.S. dollar will benefit irrespective of the outcome.

In other words, gold versus the U.S. dollar achieved a record high price during that time. It also handily outperformed the stock market during those four years, proving that gold is not only a safe haven but also a growth performer over time.

When discussing gold, want to emphasize the “versus the U.S. dollar” part because that’s how many of us tend to measure the value of gold – which means that we should view dollar weakness as gold’s strength by comparison. President Trump has made it clear that he wants a weak dollar in order to spur the global buying of American goods:

This presidential tweet also illustrates Trump’s insistence on low Treasury interest rates. These interest rates are typically negatively correlated with the price of gold, so Donald Trump’s re-election and the consequent low-interest-rate environment would most likely provide a multi-year boost for gold.

There’s no question that Trump will be the Republican presidential candidate, but it’s too early to know the identity of the Democratic pick. The current frontrunners include Joe Biden, Elizabeth Warren, and Bernie Sanders. Warren and Sanders are staunch advocates of Modern Monetary Theory, which contends that the government can (and therefore should) simply print more dollars to pay off its massive debts and deficits.

Warren and Sanders will never state their positions in those stark terms, but that’s the gist of their belief systems. Biden, due to pressure from his peers in the Democratic Party, has increasingly favored Modern Monetary Theory lately. With the Democratic camp exerting such strong influence over whomever is chosen to represent the party, it almost doesn’t matter which candidate they select.

As the Democrats remain in lockstep in favor of spending programs like “Medicare for All,” the “Green New Deal,” and Biden’s “Clean Energy Revolution,” investors can count on a money-printing frenzy like we’ve never seen before. If these programs are enacted, America will long for the days when the national debt was only $22 trillion. 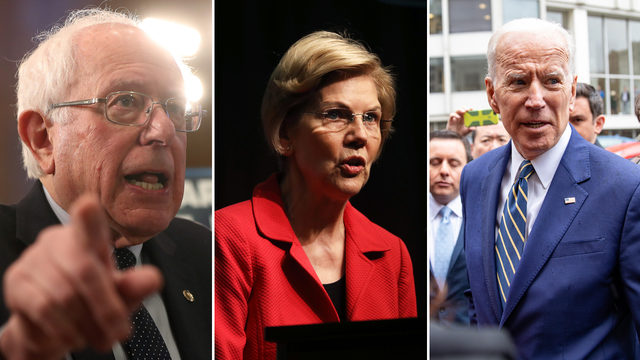 Just the Green New Deal by itself would, by Democrat Alexandria Ocasio-Cortez’s own admission, would cost $10 trillion: “I’m not excited to say we need to spend $10 trillion on climate, but … it’s just the fact of the scenario.” Personally I think that’s a lowball figure and the Green New Deal would end up costing taxpayers much more than $10 trillion – but either way, it would indubitably result in epic-scale money printing.

In a gold-bullish chain of events, massive taxpayer-funded spending programs would result in the U.S. dollar’s devaluation, which in turn would bolster the price of gold. You might think that this chain of events would take years to unfold, but keep in mind that the markets tend to be forward-looking, pricing in tomorrow’s expected future events today.

Therefore, I expect the market to price in gold’s expected appreciation ahead of time if a Democrat wins in 2020. And if Trump gets re-elected, the market will expect Treasury interest rates to stay very low for the coming four years and will, I expect, positively price this scenario into gold in advance.

Being able to benefit regardless of political outcomes is just one of the many benefits of owning gold for the long term. 2019’s first half has been exciting for gold, but I’m looking forward to an even better 2020 – maybe not better for American politics, but definitely better for gold.