The Smart Money Is Turning to Gold

One thing I’ve learned in many years of investing is that while the smart money, while not always correct in their predictions, typically outperforms the average retail investor. Crush the Street’s mission is to level the playing field by arming and empowering you with information so that you can invest like the wealthy hedge funds, or even beat them.

Who exactly is the smart money? Generally the term refers to large-scale institutional investors: think of hedge funds with much better access to data, capital, and top-tier financial talent. While you’re working at your job, they’re spending that time crunching numbers and analyzing company fundamentals.

It’s not fair, but that’s how the financial world works and it’s generally worthwhile to watch the smart money for clues as to where the best investing opportunities might reside. Take billionaire Sam Zell, for instance: he’s a highly successful hedge-fund manager and he’s revealed his risk-off position: “We certainly never had a cash position like we have now… We think there’s going to be some significant opportunities, but what we don’t see is the urgency.”

In other words, he’s in no hurry to buy large-cap stocks because he’s anticipating lower prices. Mr. Zell isn’t just stockpiling cash, however, as this year has marked his first foray into gold ownership: “For the first time in my life, I bought gold because it is a good hedge… Supply is shrinking and that is going to have a positive impact on the price.”

Welcome to the amazing world of gold, Mr. Zell – I promise you won’t regret it. With 55% of the ultra-wealthy seeing a recession happening by 2020 and legions of smart-money investors looking for safe havens today, you’re in good company as a holder of precious metals.

And given the current low-interest-rate environment, we probably won’t have to wait that long to see tremendous gains in gold. As Lassonde explains, “The financial demand is being driven by negative interest rates. Should the U.S. Treasury 30-year bond yield ever, ever go negative, like in Germany and France, God bless, we’re looking at $5,000 gold.”

The interest in gold is spreading across the globe, with China’s net monthly gold imports having increased by an astounding 61% to 13 metric tons in the month of August. This appears to be part of a consistent trend, as China has accumulated nearly 100 tons of gold since December, when the nation started reporting a resumption of net gold purchases.

Meanwhile, Russia has stockpiled 106 tons of gold year-to-date, putting that nation’s total gold stockpile at 2,200 tons compared to China’s 1,950 tons. While they’re certainly not the only nations ramping up their gold reserves, Russia and China appear to be in a competition with each other to see who can accumulate the most physical gold.

It’s not only the amounts that are increasing, but by all metrics, it seems that the pace of the accumulation is increasing as well. This, assuredly, will have a positive impact on the gold price as international demand is on the rise: 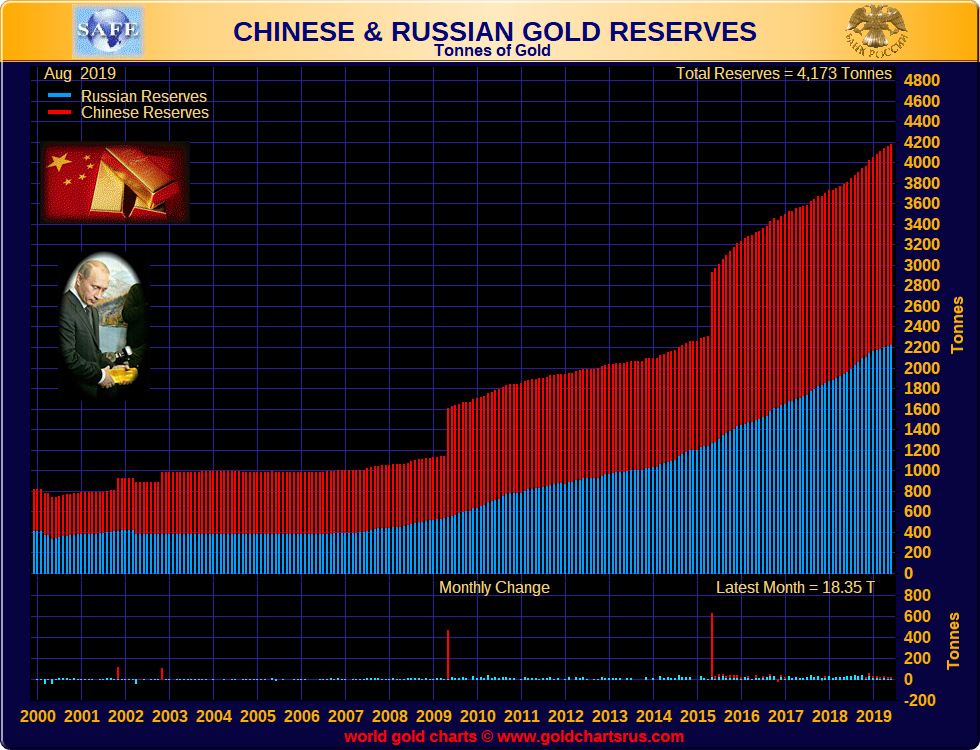 Peter Schiff, another smart-money investor and the CEO of Euro Pacific Capital, has asimple explanation for this gold-buying escalation: “They can read the writing on the wall… [They’re] preparing for the world where the dollar is no longer the reserve currency.”

Losing its world-reserve-currency status will, naturally, put an end to the U.S. dollar’s bull market; the dollar was unusually strong throughout 2018 as well as 2019 so far, but Russia’s and China’s gold-buying activity indicate an anticipation of dollar weakness in the not-too-distant future.

Clearly, nations like Russia and China are preparing for an inevitable dollar crash and hyperinflation – they’re making no effort to hide it at this point. As Russian newspaper Izvestia explained, “Investments in gold will become one of the main ways of accumulating funds in the state treasury since the metal is protected from the U.S. dollar inflation.”

And yet, if you walk into a big American bank and ask a financial manager to invest your money, he’ll most likely put it into large-cap stocks and American government bonds while completely ignoring precious metals. It just goes to show that self-education is essential – and gold, as always, is a smart-money investment you can count on.