While most people are old enough to remember the 2008-2009 financial crisis, the majority of the population wasn’t around during the Great Depression of the 1930’s. As a result, few people in America have experienced a widespread food crisis – and they weren’t prepared for the one that’s in progress now.

This problem is compounded by the fact that the majority of Americans today aren’t self-reliant. Because the government is viewed as everybody’s savior nowadays, too many citizens have the basic knowledge that their forefathers did: how to grow and store food, how to repair a car or an appliance, how to use a firearm, and so on.

And so, the reliance on bailouts, often packages as “relief” or “stimulus,” has fostered a society of unprepared citizens. If you’re reading this, then you’re probably more prepared and self-reliant than most people, but that would put you in the minority.

In the wake of the global pandemic, the culture of dependence is already punishing the unprepared. The brutal combination of economic slowdown and inflated consumer-goods prices, known as stagflation, is reminiscent of the 1970’s.

At least in the 1970’s people were free to leave their homes, though. Today, people are out of work and can’t go anywhere, kind of like a crimeless version of house arrest. In response, the government is doing the only thing it knows how to do in a situation like this: print money faster than ever.

When that happens, the price of pretty much everything should go up, at least in theory. In these bizarre times, however, data gets skewed and dire scenarios can be made to look sanguine:

Judging by the chart shown above, you’d think that everything should be more affordable now. The U.S. inflation rate plunged from 2.3% to 1.5%, and then all the way down to an almost unimaginable 0.3% in April. That’s the lowest inflation rate since October of 2015.

That’s a cause for celebration, right? Not so fast. That’s the overall inflation rate, and it doesn’t apply to every category of consumer goods. The things that people can’t live without – those are now more expensive, not less.

You see, April’s inflation-rate plunge is mainly due to a 32% drop in gasoline prices that month. The oil price has rallied since April, bringing gasoline prices back up as well. Another driver of the inflation-rate drop in April was the 5.7% drop in cost of apparel. That’s marginally beneficial for consumers, but it’s not too helpful for folks who lost their jobs in the retail-clothing industry.

What the chart conceals is the 3.5% monthly increase in the cost of food. That represents the highest rate of increase since February of 2012. That’s devastating to the average consumer in a time when many people are unemployed and food bills are unavoidable expenses.

We’re not just talking about fancy food here, either. Prices have increased substantially for basic food staples, the types of items we give to our kids so they’ll get the vitamins they need. Check out this chart of the price of orange juice: 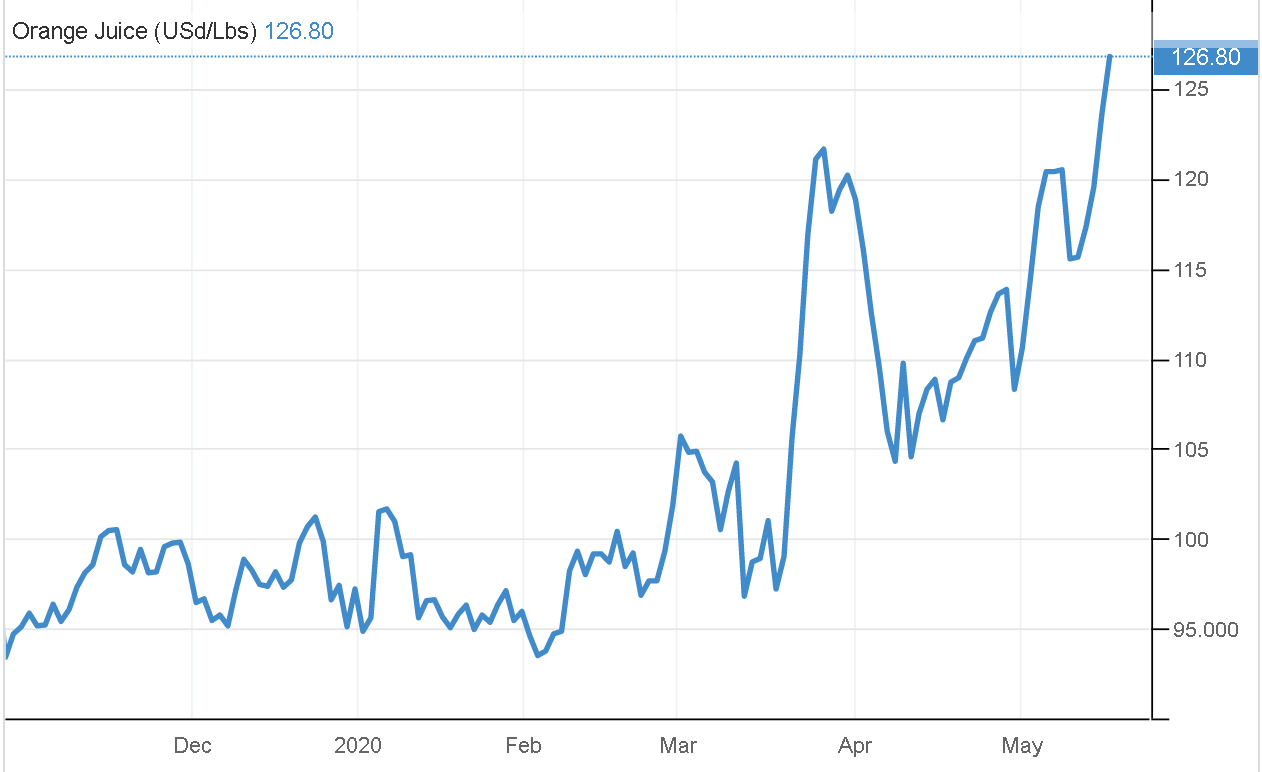 With orange juice at $1.26 per pound, it’s more expensive to get your daily dose of vitamin C than it’s been in a long time. It’s cruel because the stimulus checks are quickly diminishing in their ability to pay for the items that we need to survive.

Remember, it’s normal for prices to increase by a couple of percentage points per year, not per month. Here are some more shocking food-price increases, all of which just took place during the month of April:

That’s not caviar and champagne; it’s basic food items for middle-class American families just trying to get by. And again, these are one-month price increases. Multiply those by 12 to see what a full year of this would look like.

It would look terrible – there’s no way around it. In response, you can hope that the coronavirus crisis subsides quickly, or you can do what informed citizens ought to do: stick to your principles of self-reliance, skepticism, and self-education as those are the best anti-inflationary weapons available.