Those $50 Silver Predictions Don’t Sound So Crazy Now, Do They?

Back when silver was briefly trading at $50 per ounce in 2011, no one imagined that it would plummet to $13 in early 2016. But then a vicious commodities bear market commenced and the next thing you know, investor sentiment reversed and predictions of silver reclaiming $50 sounded far-fetched.

It didn’t sound far-fetched to me, though, even when silver was $13 an ounce and folks were predicting sub-$10 prices. When I started hearing the pundits piling into the short side of the trade, I could feel in my bones that a bottom was forming in the silver price.

The gold-to-silver ratio, a criminally underreported and underappreciated metric of just how ridiculously cheap silver has been for multiple months, reached the extreme level of 93 not long ago. This is a ratio that always comes back to 50 sooner or later, so gold’s rebound should catapult silver into the stratosphere as the white metal plays catch-up in a commodities super-cycle that’s already in progress.

As J.C. Parets once put it, “When metals market participants are bullish, they’ll be buying silver for the exact same reasons equity bulls buy small-caps.” Silver is a highly liquid asset, universally recognized as a store of value – and besides, it has more industrial uses than gold. And, much like small-cap stocks, silver is inexpensive and can make relatively outsized moves in a short span of time.

Thus, any strong move in should produce an even stronger move in silver. Peter Schiff, the CEO of Euro Pacific Capital, recently predicted that the spot price of gold will go far above $5,000 per ounce; the primary driver of this, according to Schiff, will be governments and central banks around the world creating inflation by spending money they don’t have. 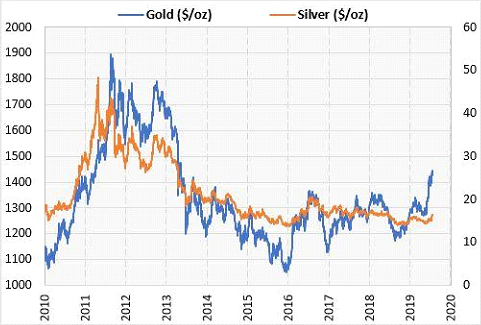 As you can see in the chart above, it only took gold reaching $1,900 for silver to achieve $50. If Peter Schiff’s price objective of $5,000 gold is met – or even if it gets just halfway there – imagine how far silver could fly: suffice it to say that $50 silver would be an understatement.

Granted, central banks around the world aren’t stockpiling silver like they’re doing with gold. That’s fine, as the chart above depicts silver’s relationship with gold: one might lag the other for a short while, but the two lines will eventually meet and there’s no imaginable scenario in which gold could permanently diverge from silver.

Global de-dollarization will also bolster the price of silver, as nations like China and Russia are unabashedly divesting themselves of U.S. debt notes in favor of more stable assets. The share of euros being used in Russian exports has increased for four consecutive quarters, for instance, while the share of U.S. dollars being used for that purpose is shrinking fast.

Meanwhile, Russian President Vladimir Putin has been quoted as saying that Russia and China have agreed to expand the use of rubles and yuan in bilateral trade – once again, at the expense of the U.S. dollar’s tenuous status as the world’s reserve currency. Clearly, hard assets like silver are the best investment in a time when major world powers are emancipating themselves from dollar dependence. 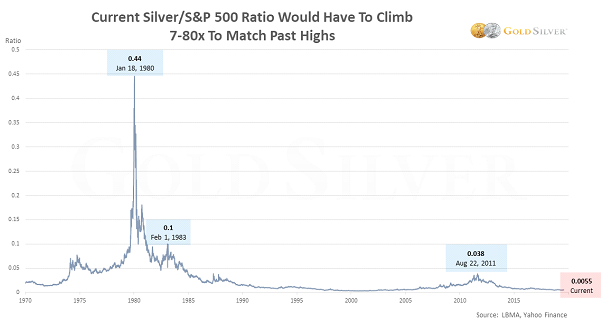 And let’s not ignore another important metric: the silver-to-S&P 500 ratio, which measures how expensive silver is when compared to the stock market. Currently, as you can see in the chart above, the ratio is extremely low and is capable of going much, much higher.

In fact, the ratio would have to increase by a multiplier of seven times just to reach one of the smaller historical peaks – and it would have to increase 80 times to attain the ratio’s peak from January of 1980. In that scenario, Peter Schiff’s call for $5,000 gold would be a conservative estimate, while silver would easily pass the $50 mark.

It’s also worth noting that silver’s attainment of the $50 level occurred in 2011, and that was the same year as the recent mini-peak in the silver-to-S&P 500 ratio, seen in the chart displayed above. So again, the ratio wouldn’t have to go anywhere near the 1980 peak in order to achieve a $50 price for silver.

The bottom line is that the call for $50 silver isn’t any more far-fetched today than it was in 2011: the good times, if I’m correct, are just getting started for patient silver stackers.