Time to Head North: Canadian Stocks Poised for a Breakout

I’m always amazed at how the U.S. mainstream media spends little to no time reporting on what’s happening in Canada. This helps to explain why most Americans have no idea that cannabis is legal in Canada, or that there’s been major flooding via Lake Ontario.

The corporate financial media also tends to ignore what’s going on in Canadian stocks, which is a real shame because there are plenty of opportunities there. Fortunately, Crush the Street frequently reports on the Canadian markets, empowering U.S. investors to think outside the box and profit from underpriced assets globally.

There are a number of markets and exchanges in Canada, but the most lucrative one for me has been the TSX Venture Exchange. I’ve seen stocks on this exchange increase by a factor of two, three, or even greater in a relatively short span of time.

Known as the Canadian Venture Exchange prior to 2001, the TSX Venture Exchange (which you’ll sometimes see abbreviated as TSX-V or TSX.V) is basically a public venture capital marketplace for emerging companies, with a strong focus on Canada’s rich natural resource sectors. 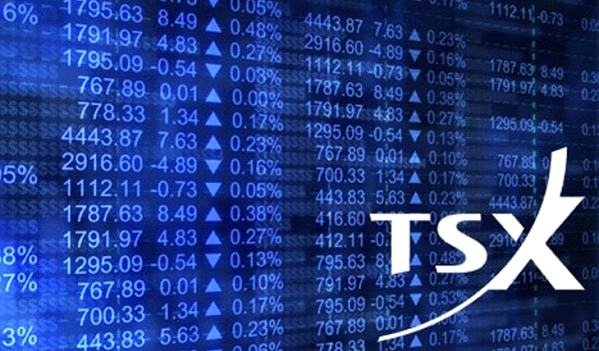 There are currently more than 1,600 companies listed on the TSX Venture Exchange, with the majority (53%) in the mining sector plus a smattering (15%) in the traditional energy space. The vast majority of TSX companies are headquartered in or near British Columbia, Alberta, or Ontario.

Many TSX stocks have an American OTC exchange equivalent, so it’s often not necessary to have a Canadian brokerage account to invest in TSX-listed companies. So, for example, you might see a Canadian company listed with “TSX-V:” followed by the ticker symbol, followed by “OTC:” and the American version of the stock.

I’ve learned over the years that if you see an American OTC stock ticker and it has five letters and ends with an “F,” then there’s a pretty good chance it’s a small-to-mid-cap Canadian company with an equivalent stock listed on the TSX Venture Exchange.

Popular U.S. brokers like eTrade, Schwab, Fidelity, and TD Ameritrade will often allow American traders to buy and sell the American OTC versions of these stocks. If you prefer to trade the Canadian versions, you might Interactive Brokers, PennTrade, Questrade, or Qtrade (I’m not endorsing any particular broker, so be sure to check with their customer service first).

Now that you know the basics, let’s take a look at the long-term opportunity I’m seeing in the TSX right now: 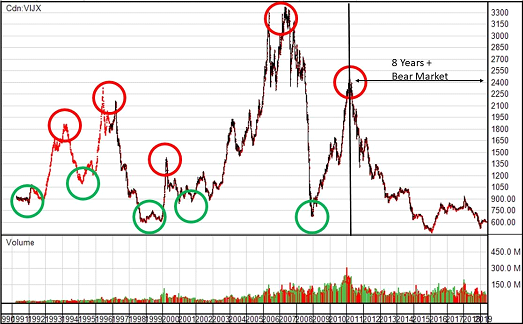 The chart above shows multiple decades of the S&P/TSX Venture Composite Index, a broad market indicator for the TSX Venture Exchange which is managed by Standard & Poor’s and includes about 500 companies weighted by market capitalization.

It’s not often that we see the S&P/TSX Venture Composite Index trading in the 600 region, so this certainly looks like an oversold level as well as a support level that held nicely multiple times in the past. And just as bull markets can get old, the 8-years-old TSX bear market is definitely starting to show its age.

Beyond the technical analysis, there’s a very compelling reason to get into the TSX now: it’s a gold-heavy market, and central banks have been stockpiling gold like there’s no tomorrow, Indeed, in their continued efforts to trim their exposure to the U.S. dollar, Russia and China’s central banks helped drive a 7 percent increase in gold demand in Q1 2019 compared to the same quarter last year.

As reported by the World Gold Council, central banks purchased a total of 145.5 metric tons of gold worth about $6 billion during 2019’s first quarter, an increase of 68 percent compared with the same quarter in 2018 and the strongest first quarter since 2013. Total global gold demand reached 1,053 metric tons in Q1 – and yet, gold versus the U.S. dollar remains stubbornly below $1,300 an ounce.

I view this as an opportunity, not as a source of frustration. Investors can capitalize on two underpriced asset classes at once by accumulating shares of gold mining companies listed on the TSX; when gold and the TSX break out, the gains could be exponential.

Crush the Street has featured a number of huge winners in the Canadian resource space, and we’ll continue to publish fresh picks and actionable ideas. In the meantime, keep looking to the Great White North for surprising opportunities and your next big gainer in the global markets.