HITTING WHERE IT HURTS: Will the U.S. Suffer the Most from Tariffs, or China?

It’s been in the news constantly: the dreaded T-word, tariffs. Taxes on imports, especially when they target a particular country, can be used as an economic weapon of war, though most world leaders are cautious in their deployment of that particular weapon. Not so with our current world leaders, however, especially in the U.S. and China.

The idea is to hit the opposing nation where it hurts by limiting businesses’ ability to export goods, potentially stunting that nation’s GDP. Another objective would be to pressure consumers to buy domestically produced goods, thus benefiting the local economy.

China has made no bones about its willingness to retaliate against the U.S.’s salvos in the tariff war, and tensions persist with no clear outcome so far. Despite extremely brief periods of détente, new rounds of bilateral tariffs are being imposed on a regular basis: in the latest tit-for-tat, The U.S. tacked on an additional $200 billion in tariffs on Chinese imports, prompting China to retaliate with announcements of intentions to impose tariffs on $60 billion of U.S. goods.

And that’s not the end of it: the U.S.’s tariffs started at a rate of 10%, and could jump to 25% on January 1. The current administration’s tariffs are applied to over $300 billion worth of imports, and there’s no sign of any reversal in this trend. Interestingly, the U.S. stock market is now so accustomed to it that new rounds of tariffs barely move the needle in the major indexes anymore.

Of course, the Hang Seng and the Shanghai Composite haven’t fared as well as the S&P 500, but that’s more of a concern for Wall Street than Main Street. Equities prices aside, it looks like both nations will have to accept some economic damage, but who is really taking the biggest hit: China or the United States?

The answer is: it depends on whom you’re asking. For example, U.S. economists are largely opposed to the tariffs because they view it as a tax on business activity that will ultimately be borne by the consumer. As for business owners in the United States, the sentiment is mixed: 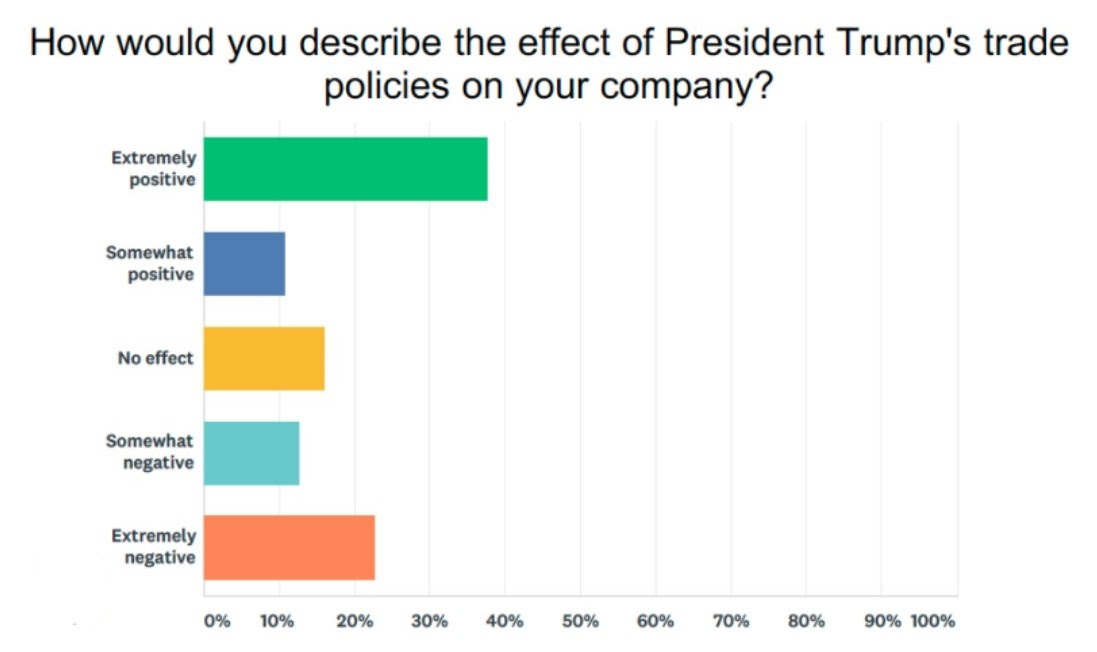 In a recent poll posted online at Yahoo Finance and conducted via Survey Monkey, 1,098 people (mostly business owners) were asked to describe the effect of the U.S.’s trade policies on their company; 49% expect the net effect to be favorable, while 36% expect negative consequences from the tariffs.

But that’s just people’s opinions – an objective analysis reveals an imbalance in the impacts of the tariffs. The fact is, the U.S. buys more goods from China than China buys from the U.S. It’s the reason the trade deficit is so big in the first place: the U.S.-China trade is heavily lopsided. 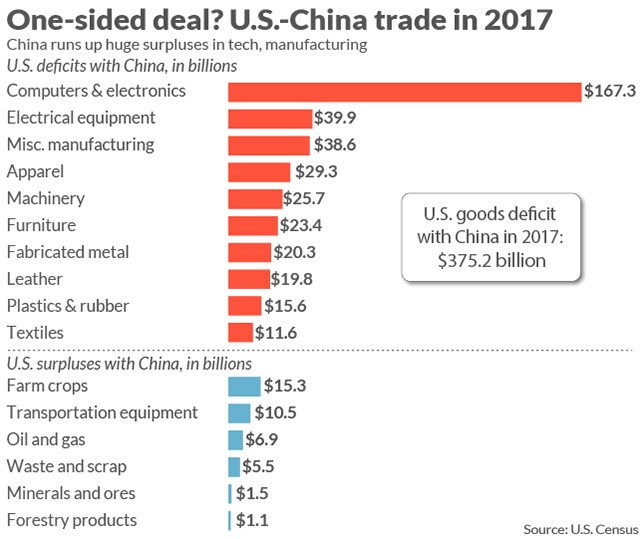 The whopping $375.2 billion U.S. goods deficit with China last year was especially egregious in the areas of computers and electronics, electrical equipment, apparel, and machinery, just to name a few. Trade-war supporters will undoubtedly point out that this is the exact problem that the tariffs are meant to solve in the first place.

On the other hand, it’s the trade imbalance that’s causing disproportionate financial pain for Chinese businesses that rely on sales of goods to the massive American consumer base. The current U.S. administration’s tariff list targets approximately 67% of Chinese exports, which accounts for 18% of that nation’s GDP. With manufacturing being China’s largest individual employment sector, the potential for financial harm is significant.

We hear of domestic companies like Ford and Harley Davidson being impacted by the trade war, and the financial toll on these firms cannot be discounted. But for innumerable Chinese companies, losing the U.S. market is the equivalent of a death sentence.

In 2017, the United States bought $430 billion of China’s exports last year, representing a full 20%; the number-two market, the 28-nation European Union, only bought $370 billion of China’s exports. The imposition of tariffs is essentially pulling the rug out from under Chinese businesses – and in fact, a recent Chinese purchasing managers survey shows growth in business activity slowing to a 14-month low.

As Zhong Zhengsheng, the director of macroeconomic analysis at CEBM Group, has noted, the Chinese manufacturing sector has “continued to weaken amid soft demand, even though the supply side was still stable… I don’t think that stable supply can be sustained amid weak demand.”

This, in turn, is putting a heavy strain on the Chinese economy. To quote Mr. Zhengsheng again, “[T]he worsening employment situation is likely to have an impact on consumption growth… China’s economy is now facing relatively obvious downward pressure.”

Trade war was used a record amount of times during this year’s earning calls and will certainly be a factor in the stability in the stock market going forward. The end result of the ongoing tariffs remains to be seen, but one thing’s for sure: the world’s second-largest economy is bearing the brunt of a war with plenty of collateral damage.