Situated in One Bryant Park in Manhattan, the National Debt Clock has been working overtime for the past year, numbers whizzing by as America’s mounting debt piles up like laundry in a frat house. And now, a new “milestone” has been reached as the nation’s debt surpasses the $22 trillion mark.

We all knew it was coming, but it’s the diminishing span of time between each new trillion-dollar milestone that’s so disconcerting. It used to take a very long time for each new trillion to be reached; this latest trillion (from $21 to $22 trillion) only took 11 months. 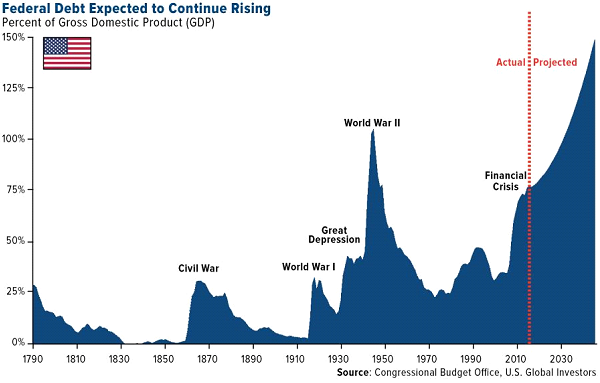 Peter G. Peterson Foundation CEO Michael A. Peterson’s commentary sums up the import of the situation: reaching $22 trillion in debt “is the latest sign that our fiscal situation is not only unsustainable, but accelerating.” And so, not only do we have a debt that’s growing, but the pace at which it’s growing is itself growing.

Peterson bolsters his argument with a couple of fact that should turn any concerned American’s stomach: “We already pay an average of $1 billion every day in interest on the debt, and will spend a staggering $7 trillion in interest costs over the next decade.”

Politicians on both sides of the aisle jawbone about the need to reduce the national debt, but clearly there’s little if any headway being made in this regard. The debt-to-GDP ratio serves as a powerful visual illustration of how the nation has gotten into the unfortunate habit of owing more than it produces:

According to calculations made by The Brookings Institution, the ratio of publicly held debt to GDP could go as high as 193% by 2049 unless current trends change. And is there any reason to believe that the current trends will change anytime in the near future?

If it’s any comfort, Americans might be able to point to Japan as a worse offender in this particular area, as that nation’s debt is currently around 236% of their GDP. That’s not much consolation, however, as U.S. citizens are left wondering how much longer it will be before the debt crisis reaches a tipping point and wreaks havoc on the economy.

For the time being, we can sit back and watch the Debt Clock fly through the digits, each new trillion coming quicker than the last one.