Ugly Truth Surfacing: Get Ready for It!

The BROKEN LEG OF THE ECONOMY: Scary Numbers in the Slowing Housing Market

We’ve heard this story before, exactly a decade ago: a breakdown in the housing market that belies a seemingly robust economy and new highs in the major stock indexes. As an investor, you should be watching the real estate market very closely – it’s a much more accurate indicator of how the economy’s doing than unemployment numbers and empty words from the Fed.

Judging by the rosey language of Fed Chair Jerome Powell, you’d think it’s the start of a brand-new bull market. Powell is absolutely glowing, saying he’s “very happy” about the “remarkably positive” economic outlook in the U.S., expecting this to continue “for quite some time.”

And, of course, we’re seeing our leaders publish rock-bottom unemployment figures, which you can choose to believe if you agree with the government that part-time workers and people who simply gave up looking for a job are “not unemployed.” It’s a tactic that’s been used by political leaders on both sides of the aisle for years, so why would they stop using it now?

At the same time as all this “good news” is being fed to us, housing and construction trends appear to be topping out and preparing for a nasty fall. Homebuyers are sick and tired of inflated real estate valuations, and they’re simply opting out: 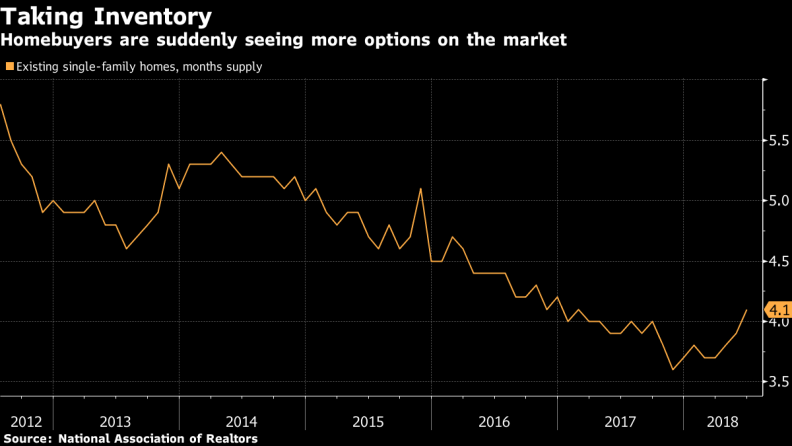 Existing-home sales are a leading indicator of a cooling in the real estate market, and so is the Case-Shiller 20-city home price index, which is pointing to massive downside risk in the near-term: 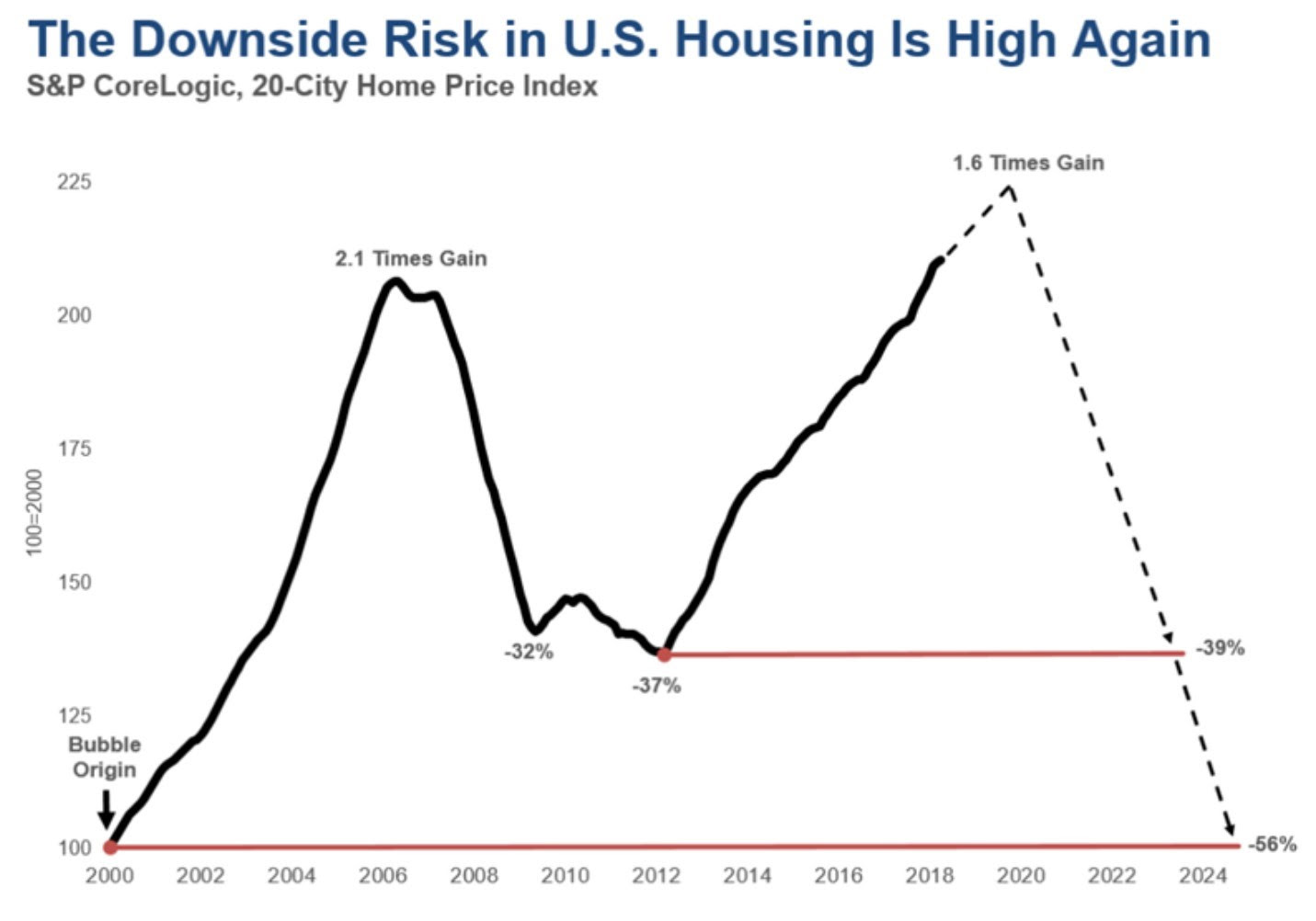 The inevitable decline is going to hit all corners of the market – not just housing. The majority of people’s wealth in the U.S. is stored in their homes, and just as it was for astute market observers in early 2008, the state of housing is a strong indicator of the nation’s economic health.

Let’s be real: the fact is that ultra-low interest rates only prop up real estate prices, making it easier for people to have a 30-year mortgage but hurting those who want to pay off a house and truly own it.

Millennials are already feeling the pain, as this generation has an average of $30,000 in student debt, doesn’t have a financially and emotionally rewarding job (despite what the government’s job numbers may claim), and just can’t afford home ownership. If the generation that will rule the housing market in the coming years isn’t confident in their ability to afford housing, what does that say about the future of our financial system?

To add insult to injury, the same Federal Reserve that forced savers, investors, and retirees into the stock market by lowering Treasury coupon rates to almost zero has now reversed course and begun a policy of regular rate hikes. This will inevitably lead to an increase in the cost of home ownership, which itself will contribute to the collapse of our brittle economy.

Baby boomers are holding up whatever’s left of the housing market, and I hate to say it, but they won’t be around forever. This does not bode well for housing demand, which has nowhere to go but down: 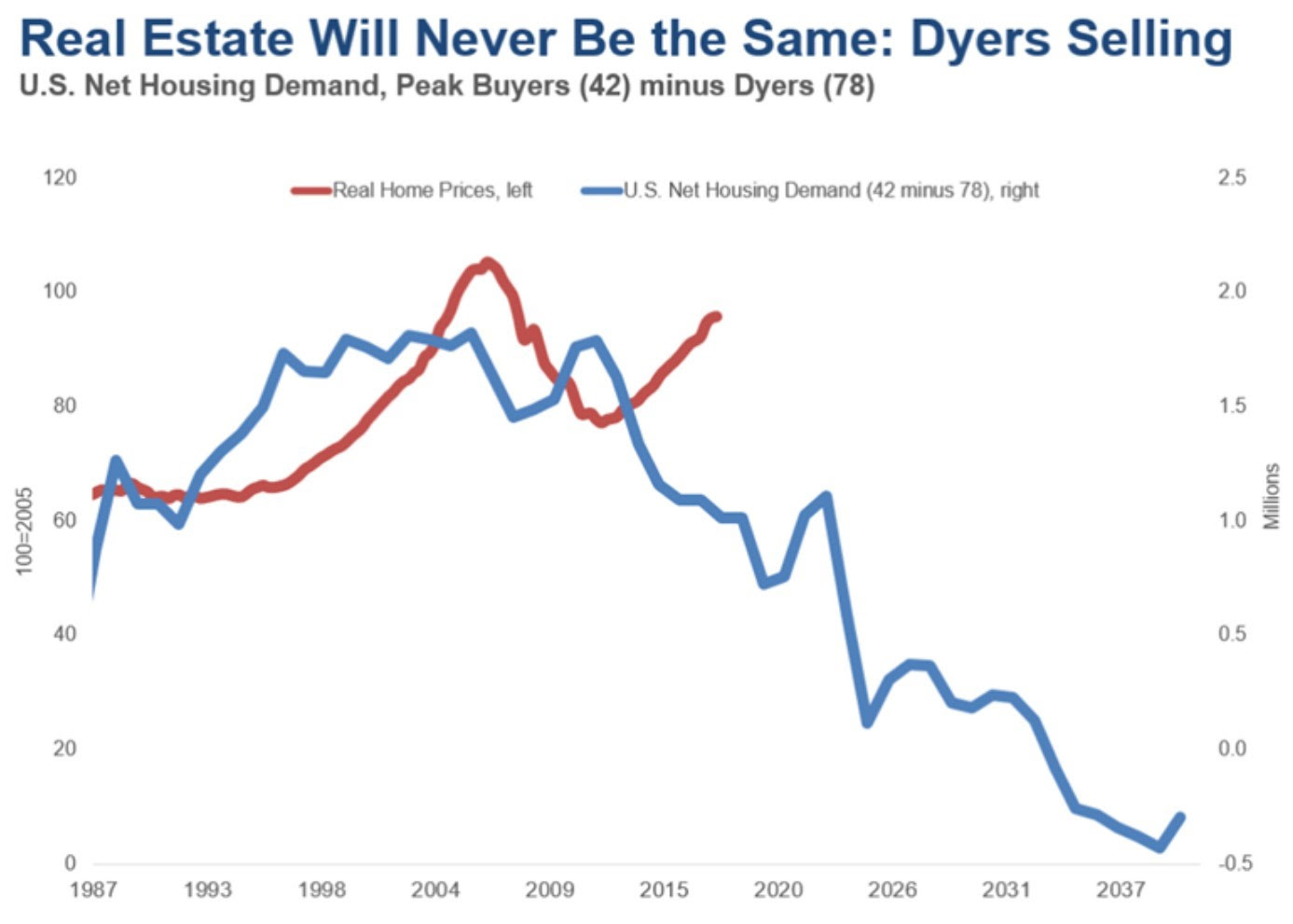 Projections all the way to the year 2040 are extremely bearish, but don’t expect the collapse to take that long. A convergence of factors that have been decades in the making – unsustainable national debt, hidden unemployment and underemployment, creeping inflation, and a waning dollar – will combine with the housing crisis to bring the economy to its knees sooner than you probably think.

The same way we were in front of cobalt, lithium, cryptocurrencies, A.I., precious metals, and cannabis, I feel it’s my responsibility to educate my readers on what is going on in the real estate market and understand the risk, as things are rapidly changing.

This isn’t advice to go out and sell your real estate or not go out and buy a home to live in or as an investment, but it’s a strong suggestion to act with more prudence and more margin of safety than you would have otherwise done in the past because in an everything bubble, circumstances can turn on a dime. And the ugly truth in real estate is starting to show its ugly face.