Venezuela Releases its First Economic Stats in 3 Years… and the Inflation Rate Is “Only” 130,060%

When a nation chooses not to release its economic numbers for multiple consecutive years, you know there’s probably something amiss. And by any logical metric, a 130,060% annual inflation rate of a nation’s currency is generally considered a bad thing. Somehow, though, Venezuela’s government-released figures could actually be spun as an “improvement” over consensus estimates.

With conflicting figures, it’s up to you to decide whom to believe. Given the absence of official data for the past few years, and with the utter lack of transparency in the current Venezuelan regime, precise estimates are hard to come by. Bloomberg’s most recent data pegs Venezuela’s annual inflation rate at 99,900%, while the IMF puts it at 282,973% for April 2019: 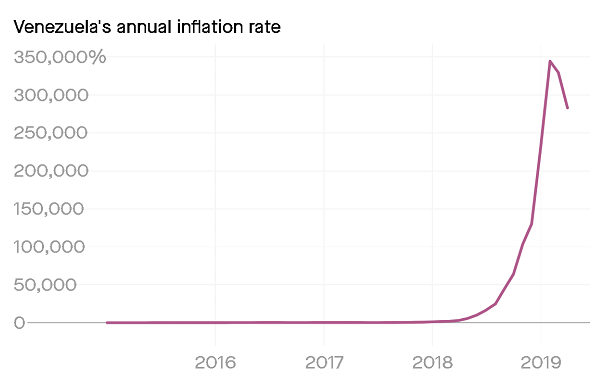 How did it get to this point? Venezuelan President Nicolas Maduro has claimed that the nation is the victim of an “economic war” waged by opposition businesses with the support of Washington. The IMF and other critics, however, cite unchecked expansion of the money supply and currency controls that leave businesses unable to import raw materials and machine parts.

For their part, Bloomberg asserts that Venezuela’s dire economic situation has been deliberately engineered by the Maduro regime, which has forced banks to hoard cash at the Central Bank of Venezuela – funds which the citizens would otherwise use to buy U.S. dollars on the black market.

While Venezuela’s reported figures might almost seem comical, there’s nothing funny about the political and economic breakdown of this oil-rich nation. Alejandro Werner, director of the IMF Western Hemisphere department, has stated that the situation in Venezuela is comparable to “that in Germany in 1923 or Zimbabwe in the late 2000s.”

According to the Central Bank of Venezuela, the country has suffered double-digit declines in GDP (gross domestic product) during every quarter since the end of 2015. And it has only gotten worse, with Venezuela’s year-on-year GDP growth declining by 23% in the third quarter of 2018: 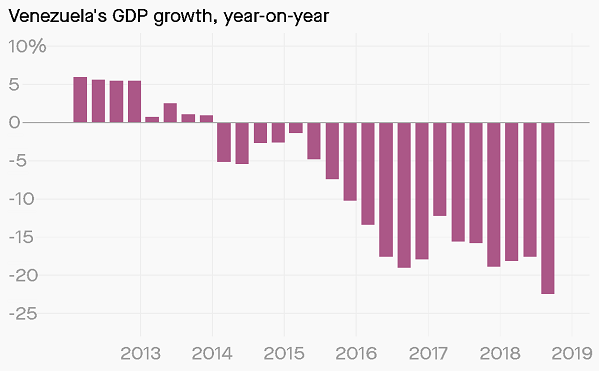 Those are the Venezuelan central bank’s official numbers, and the IMF expects this unsettling trend to continue, with a forecast that Venezuela’s year-on-year GDP growth will contract by a full 25% this year.

What these numbers don’t fully convey is the suffering endured by the citizens of Venezuela. In a country that produced 1.03 million barrels of oil per day in April, reports leak out of week-long electricity blackouts, long lines at gasoline stations, and desperate citizens ransacking stores in search of food for their families.

Experts blame this on “years of underinvestment, corruption, and brain drain” on the part of the Maduro regime, but the world has yet to see Maduro accept responsibility for Venezuela’s financial ills. As for the nation’s citizens, more than 3 million Venezuelans have fled the country since 2015 as relentless inflation and widespread shortages have made necessities like food and medicine unaffordable and/or unavailable.

Meanwhile, the Venezuelan black market has offered little solace, with a dozen eggs costing upwards of $150, a kilogram of maize flower or pasta selling for more than $300, and just over two pounds of powdered milk costing $700 – nearly half of Venezuela’s minimum wage.

The Venezuelan government’s so-called Petro digital coin hasn’t helped, either. Launched in 2018 and allegedly backed by Venezuela’s oil and mineral reserves, the Petro has been an absolute flop and has yet to gain any acceptance whatsoever among major international cryptocurrency exchanges.

Frankly, I can’t blame Venezuela’s citizens for turning to Bitcoin and the blockchain for a glimmer of hope amid this horrendous hyperinflationary economic meltdown. The digital ledger might be the nation’s only real hope for a chance at normalcy – not to mention prosperity – as the world watches Venezuela decline into the abyss.