There is an extreme disconnect between the central banks’ public words and their actions. Even Ben Bernanke said that gold is NOT money and is merely a tradition during some strong questioning from Congressman Ron Paul.

In 1971, Nixon completely removed what was left of gold’s role in backing the US dollar, which had less to do with the results for gold and more to do with consequences for the dollar. The fact is, that you can take the gold out of fiat, but you can’t take the money out of gold. That’s why paper currencies become worthless and gold still keeps its purchasing power for thousands of years: it’s a hard asset.

In an indirect sort of way, it’s like friends in your life that come and go versus family. Someone can be your friend one day and backstab you the next. No matter what happens between your family though, BLOOD family doesn’t change.

Money is the blood that flows through the veins of gold, and that isn’t changing.

The disconnect from central banks’ words to actions are at extremes!

In 2018, we saw the largest year-over-year increase in gold purchases from central banks since Nixon closed the gold window back in 1971. What does this tell you about where they actually think gold is heading?

It’s hard to remember what it was like during the 2008 financial crisis when everyone’s 401(k)s turned into 201(k)s, but cyclically and inevitably, it’s going to happen again.

Now, whether you like or hate Trump, the fact is that the deficit for February is the largest in recorded history. It’s hard to say that who we have running the country is a conservative, even if there are things about him you may like for valid reasons.

The 2020 spending plan, dubbed as the “Budget for a Better America,” is a $4.7 trillion monstrosity. The expectation is that America will take in $3.6 trillion based on a 3%+ OPTIMISTIC growth rate, which is very questionable. The trillion-dollar annual deficit for the rest of Trump’s presidency is now baked in the cake, and that’s going to happen in good times. It’ll be “pedal to the metal” if cracks in the underlying foundation take hold.

With the trillions of dollars the Fed has injected into the system, the wealth effect con game continues to move along. It’s easy to be in denial of these debts and deficits because in the short-term, things have been fine. But any disruption to the Kool-Aid the economy has been drinking could seriously disrupt this illusion of a “wealth effect” we have all been experiencing.

In the end, gold will be the primary beneficiary of all of this, and we here at Crush The Street are spring-loaded to the upside.

There will be a wealth effect that trickles into the wallets of those prepared with hard assets and inflation-proof portfolios.

I have just interviewed Jerry Robinson of FollowtheMoney.com, where we go over all of this in great detail. It’s a must-listen-to discussion. Pull a pen out and take some notes for this one as Jerry takes us really deep in this conversation… 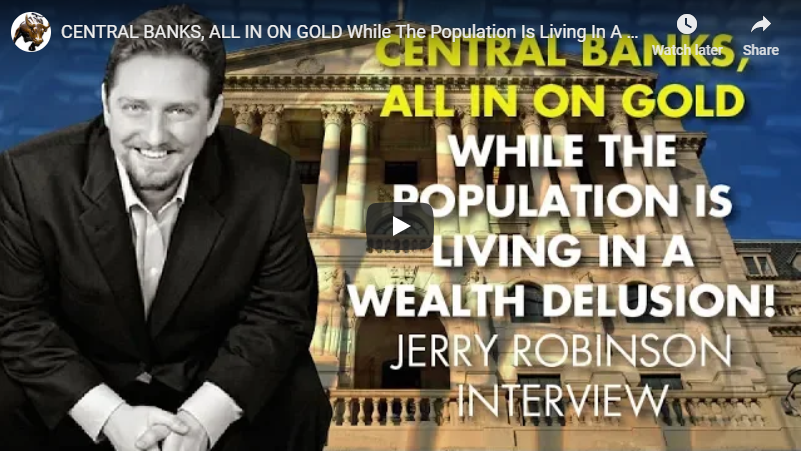