WHAT Middle Class? Evidence That the “Recovery” Never Happened, Straight from the American Government

While it’s typical for governments to play the blame game when things aren’t going well and to take credit when the economy improves, from time to time the truth accidentally slips out. A perusal of the Social Security Administration’s own website provides a chilling example of this – and of how the American middle class is really just a hair’s breadth away from slipping below the poverty level.

It’s right there in black and white, available for anyone to read: “50 percent of wage earners had net compensation less than or equal to the median wage, which is estimated to be $31,561.49.” That’s the latest estimation from the U.S. Social Security Administration’s website, which bases its reporting on information on W-2 tax forms.

And that’s before federal and state taxes are taken out. Then, of course, taxes are paid again whenever the remaining funds are used to purchase pretty much anything. No wonder most Americans who are above the so-called “poverty level” (absurdly defined by the government as under $12,140 for a single individual or $29,420 for a family of five people) feel like they’re sinking in financial quicksand.

To flesh out the picture of what the middle class is going through in America, consider the following facts:

*  78% of full-time workers said they live paycheck to paycheck, up from 75% last year

Even folks making six-figure salaries are in rough shape, with nearly 1 in 10 of Americans earning $100,000 or more saying that they usually or always live paycheck to paycheck, and 59% of those in that salary range saying they’re in the red.

But going back to the official government figures, consider how a family of five earning less than $29,420 annually (and, once again, that’s before taxes are taken out) is considered to be under the “poverty line” – and yet, they’re also saying that 48% of American workers earned less than $30,000 last year.

Meanwhile, on the employment front, the U.S. government (the same one that claims the unemployment rate is 3.7%) concedes that the labor force participation rate among Americans who are eligible to work is 62.9%. Government bureaucrats will claim that the U.S. is at “full employment,” but somehow I think the non-participating citizens would tend to disagree with that assessment.

For a more realistic picture of the employment situation in America, I defer to John Williams’ ShadowStats site with its more inclusive Alternate Unemployment Rate (which includes short-term discouraged and other marginally attached workers, as well as those forced to work part-time because they cannot find full-time employment), which currently stands at 21.2%: 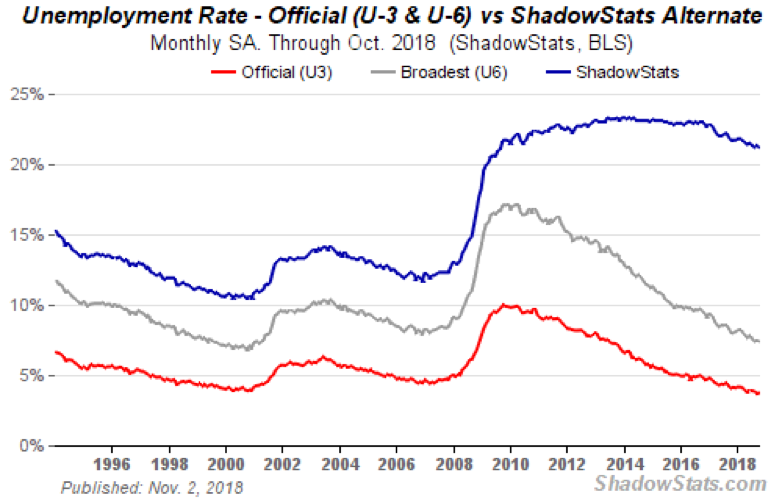 Given the government’s willingness to distort the unemployment numbers, it’s surprising that they actually publicized the fact that so many U.S. wage earners are under the poverty threshold. Nonetheless, as for the present state of America’s middle class… one has to wonder if there’s any “middle” left to be classed.