Will Santa Disappoint the Markets This Year?

It happens every year without fail: when the holiday season approaches, stock market analysts and investors start buzzing about an upcoming “Santa Claus rally” in the hopes that stock prices will get a nice boost in the final week of the year. But with market sentiment turning ugly lately, can we really count on a turnaround as the year limps to the finish line?

There’s actually a lot at stake sentiment-wise, as some investors feel that a positive end to this year is a bullish sign for next year – and the opposite is also believed to be true, or as the old saying goes, “If Santa Claus should fail to call, bears will come to Broad and Wall.” This, however, begs the question of why people believe in the Santa Claus rally in the first place.

Beyond plain old wishful thinking on the part of long-side market traders, there are a number of contributing factors that believers cite as reasons for the Santa Claus rally phenomenon. The simplest explanation is based on seasonal sentiment – i.e., holiday cheer and optimism which, at least in theory, could trigger stock buying.

Another possible explanation for the Santa Claus rally is the year-end bonuses handed out on Wall Street and (hopefully) on Main Street. According to this theory, some of this bonus money is plowed into stocks, thereby pushing stock prices higher. 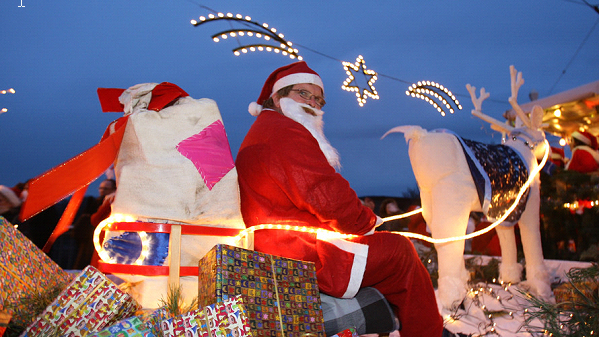 Yet another contributing factor is tax-loss stock selling and subsequent buying. Some investors will dump their worst-performing stocks in October and November in order to generate losses for tax purposes; this, according to the theory, sets up the market for a rebound in December.

Other explanations include the phenomenon of year-end “window dressing” by fund managers, who will typically load up on winning stocks at the end of a quarter to make their portfolios look good; along with the explanation that the Santa Claus rally is just a self-fulfilling prophecy: investors expect the market to rise, so they buy stocks, and the market rises.

In terms of historical seasonality going all the way back to 1950, there is a slight edge to going long during the last week of the year, with an average S&P 500 return of +0.4% during this time:

… and the results are similarly mildly bullish if we count the last two weeks of the year as the Santa Claus rally period:

But experienced investors know that seasonality doesn’t always play out according to the charts, and recent ugly market action could make 2018 the exception to the rule. The G20 summit hasn’t done much to quell trade tension fears, and investors aren’t entirely convinced that Jerome Powell will temper his hawkish temperament in 2019.

Other concerns include multiple yield curve flattenings and inversions, a hard Brexit landing, as well as macro concerns such as the slowdown in global economic growth. With such a high wall of worry to scale, something tells me that investors might just find a lump of coal in their stockings this year.