$2,000 Gold Coming: Only Bullion Will Get a Soft Landing

Resistance is futile, but it’s a necessary part of the growth process. The $2,000 level has psychological significance as well as technical importance for gold traders, as the buyers and sellers have been engaged in a tug-of-war for since the summer of 2020.

August of 2020 was the first push toward $2,000 for gold, and it was a heady time as precious metals roared ahead after a Covid-19-driven crash. A year and a half later, the gold price has hardly changed – though there were buyable dips for nimble traders along the way.

At this point, it might be tempting for long-term investors to give up on bullion, but that would be a mistake. Gold’s role as a crisis hedge will be extremely important this year and in 2023, as the Federal Reserve faces a practically impossible task: somehow reduce rising inflation without throwing the economy into an outright recession.

Just getting interest rates to half of the current level of inflation (which is 8.5% annualized) would incur extraordinary risk. Currently, the 10-year Treasury bond yield stands at slightly less than 3%.

In order to raise bond yields across the board, the central bank would need to increase the Fed funds rate, which in turn would slow down the flow of money in the economy and, hopefully, curb inflation.

This would, however, instill fear into the stock market for several reasons. First, slowing down the economy would negatively impact corporations’ revenues and earnings. Second, high bond yields means that some investors would sell their stocks and reallocate into bonds. Third, borrowing and lending activity would slow down, and banks would lose some of their income as a result. 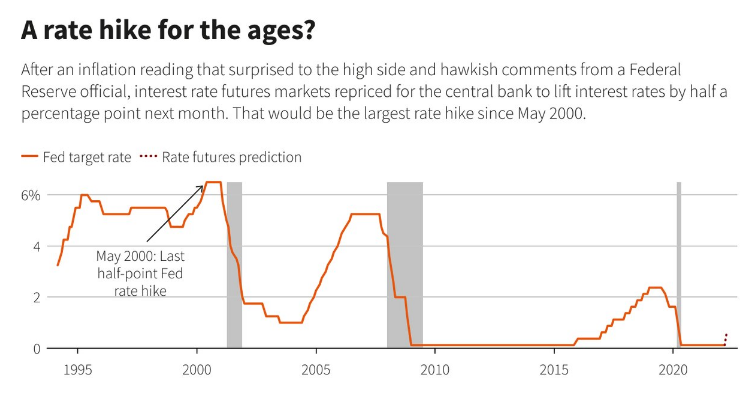 So now, the Federal Reserve has to thread the proverbial needle and manage a “soft landing” after a decade of low interest rates. There was a quarter-percentage-point rate hike at the previous FOMC meeting, but that was just an appetizer as the market prepares for a “big bang” at next month’s meeting.

That “big bang” will likely come in the form of a half-percentage-point interest-rate raise, which the Federal Reserve hasn’t done since May of 2000. Moreover, there seems to be an internal debate going on within the Fed as at least one well-known member is bracing for a possibly even bigger hike than 50 basis points.

Indeed, in regard to a potential 75-basis-point increase, Federal Reserve Bank of St. Louis President James Bullard said, “I wouldn’t rule it out.” Bullard added that inflation is “far too high for comfort, and so we have to move to get inflation under control.”

Truly, all eyes will be on the central bank during the upcoming FOMC meeting. As Tim Duy, economist for SGH Macro Advisors, put it, “The Fed needs to do something significant to establish even a minimal amount of credibility on inflation.”

Our readers know that Crush the Street has been warning people about this for a long time. The government printed up and spent many billions of dollars in response to the Covid-19 crisis, but then kept on printing and spending even after the crisis was relatively under control.

This was bound to lead to inflation far above the Fed’s previous 2% target, and Chairman Jerome Powell’s “transitory” inflation narrative was never credible. The American consumer has been squeezed hard over the past year as everything from food to fuel and rent prices have skyrocketed. 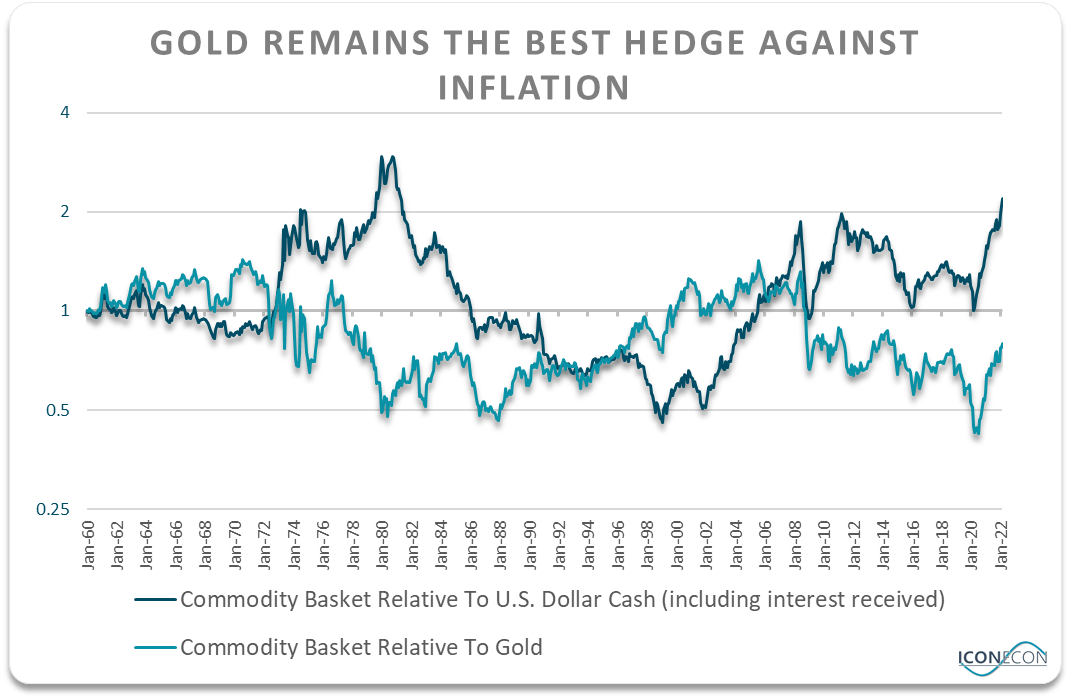 The Fed’s dilemma is a reason for investors to be cautious in 2022 and 2023, but this doesn’t translate to going all into cash. After all, the deteriorating dollar is a problem for savers just as it is for consumers – but meanwhile, gold has demonstrated a remarkable ability to retain its value.

As the nation’s central bank is compelled to inhibit economic growth and curtail borrowing and spending, bullion will reassert its position as a mainstay in portfolios of all sizes. Don’t be surprised if large funds and even central banks around the world load up on gold during the coming months, in anticipation of macro-level turmoil.

I’m not just talking about the turmoil caused by the Russia-Ukraine crisis, though that will certainly be a contributing factor. Rather, the biggest instigator will be the Federal Reserve, which is supposed to regulate the markets, not roil them.

Soon enough, $2,000 will be a distant memory for gold traders. Some folks will hold their gold and watch for the next milestones, while others will consider buying at much higher prices, wishing they had acted sooner.