To say that the U.S. economy might be “cooling” is a typical mainstream media euphemism that we only see when the situation is getting desperate. And with 20,000 jobs added in February instead of the expected 180,000, the economy is beyond “cooling”: it’s ice-cold and ready to crack.

Naturally, the Bureau of Labor Statistics tried to bury the lead by touting the slight decline in the unemployment rate to 3.8%. Of course, this figure is useless when we consider that the BLS defines an employed person as anyone who “did any work at all as paid employees during the reference week; worked in their own business, profession, or on their own farm; or worked without pay at least 15 hours in a family business or farm.”

Moreover, people are only considered unemployed if they “made specific efforts to find employment sometime during the 4-week period ending with the reference week.” The broader unemployment rate known as U-6, which includes discouraged workers as well as those holding jobs part-time for economic reasons, is reported as 7.3%.

Either way, February represents the worst month for job creation since September of 2017, when only 18,000 jobs were added. To put the addition of 20,000 jobs in perspective, consider that 311,000 jobs had been added during the prior month. Blame it on the weather if you want to – after all, what could be simpler than using an uncontrollable force as a scapegoat? – but you can’t deny the steepness of the drop: 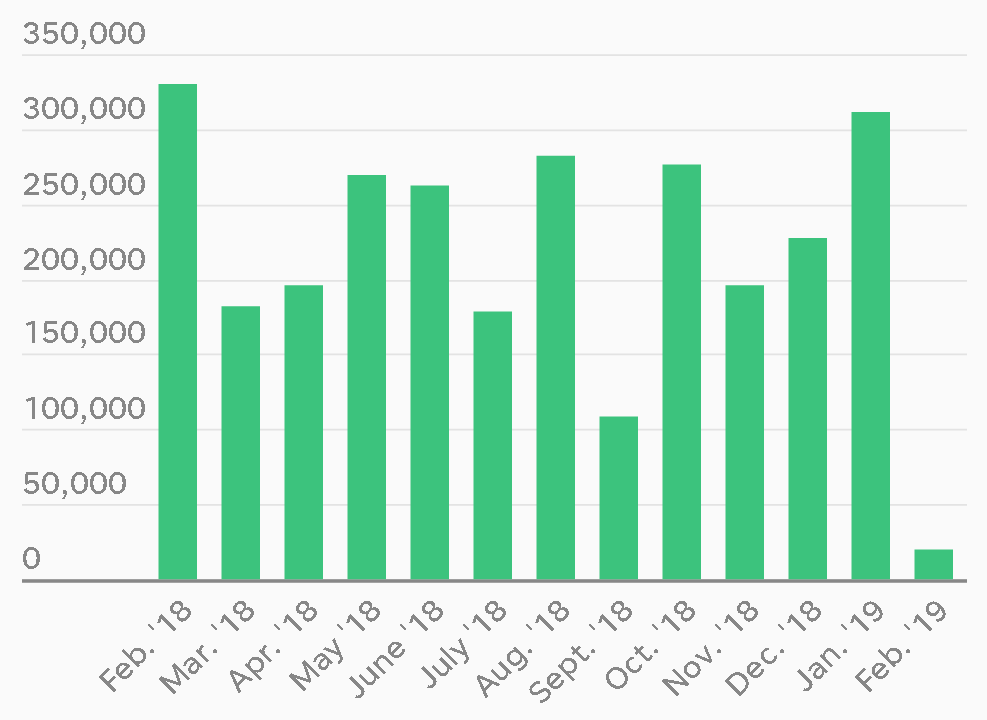 A much more compelling argument can be made that the fall-off is a symptom of a slowing global economy, coupled with the wearing off of the impact of 2017’s Tax Cuts and Jobs Act. The long and ongoing trade war between the U.S. and China is also a likely contributing factor.

Besides, excuses aren’t helping hardworking Americans who have to make ends meet. And while those who work in the “professional and business services” sector did okay in February, construction and retail workers were hit hard, with jobs declining by 31,000 and 6,000 respectively: 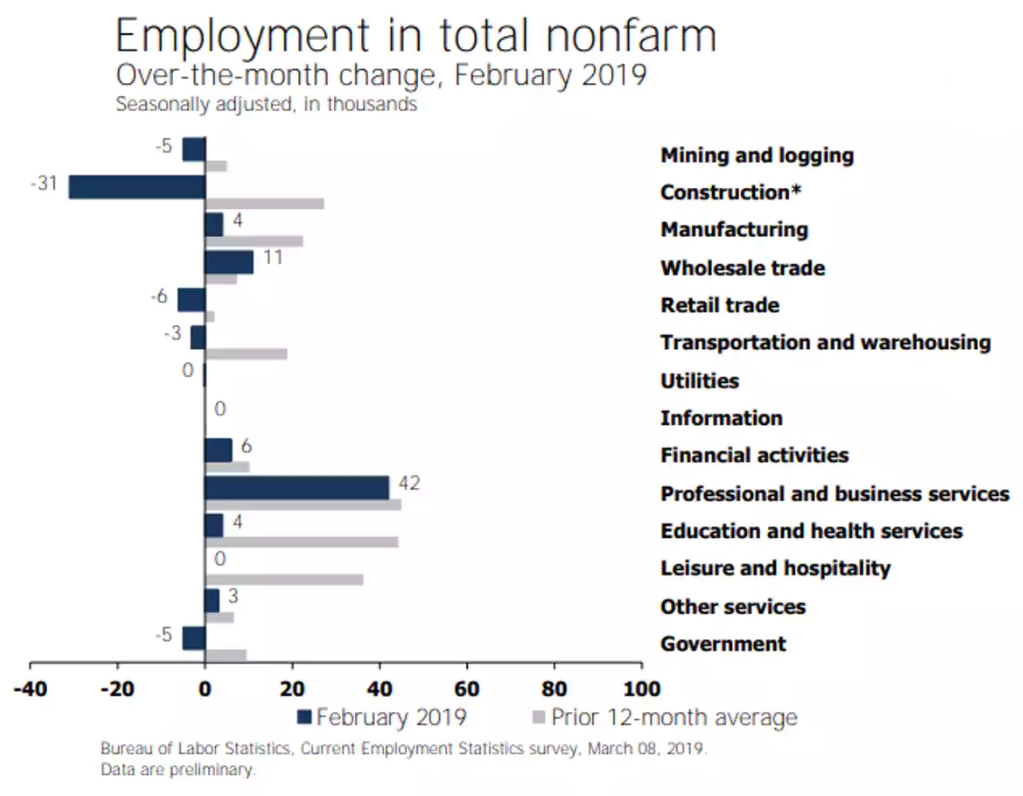 Looking over all of the major economic sectors, a majority of them experienced either zero, near-zero, or negative growth in February. The heavy and civil engineering construction subsector was notably weak, with a loss of 13,000 jobs for the month.

While this is all undoubtedly bad news for Americans, the Federal Reserve will gladly use the suboptimal job growth as a perfect excuse to remain “patient” on Treasury interest rate increases throughout the year. It’s really a win-win for the government and central bank, who wish to see job growth but not too much of it, as that could disrupt the delicate system that’s been holding up the stock market for a decade now.

Central bank motives aside, the ugliness of the latest numbers cannot be ignored. Analysts and investors were given a one heck of a wake-up call upon the release of the jobs report, with many finally starting to question the health of the American and global economic regimes.

Deutsche Bank chief international economist Torsten Slok, for instance, called the February jobs numbers “slightly worrisome” and conceded that “the reality is, the economy is slowing. The question now is whether it’s slowing for reasons associated with the trade war or because the rest of the world is slowing.”

And by the way, it’s also worth noting that low unemployment rates tend to precede recessions: 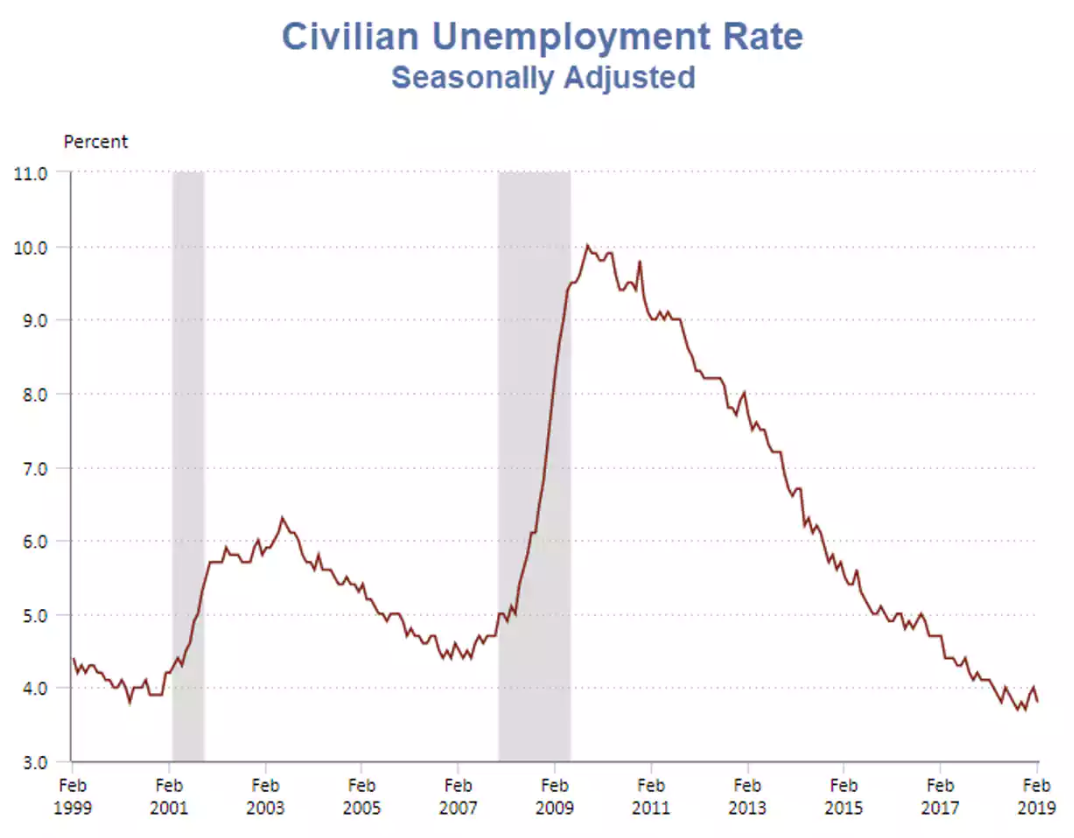 Something tells me that if the next jobs report is anything less than an absolute train wreck, the stock market will jump for joy and analysts will promptly pivot bullish. And thing will all be back to normal, with retail investors back to buying blue-chips without regard to valuation or logic.