A Slew of Bad News – and Plenty of Buying Opportunities

Are you ready to dive into the grab bag of terrific values in the stock market? Most financial traders would answer “no” to this question because they’re afraid of further declines. Yet, all bargains in the markets are accompanied by bad news and fearful feelings.

What makes it even harder to succeed as an investor nowadays is a source of confusion that’s persisted since the bailouts that took place in the wake of the 2008-2009 financial crisis. Namely, bad news is sometimes perceived as good news because it means more bailouts, but other times, bad news is simply bad news.

So, the bullish “consumer is strong” argument seems to go out the window with these lackluster sales figures. “With weak global growth and the strong dollar compounding the domestic drag from higher interest rates, we suspect this weakness is a sign of things to come,” concluded Andrew Hunter, senior U.S. economist at Capital Economics.

Another disappointing result is November’s Empire State Manufacturing Survey, which measures manufacturing activity in the New York region; this came in at -11.2, versus the estimate of -0.5. Then there’s the Philadelphia Fed survey, which was -13.8 in November versus the -12 estimate.

All of this bad news for the economy was interpreted as negative by the stock market, even though it’s exactly what the Federal Reserve wants to see in order to pivot from interest rate hikes to cuts. Apparently, stock traders were more concerned about a looming recession on Thursday than they were about the Fed riding in on a white horse and saving the day. 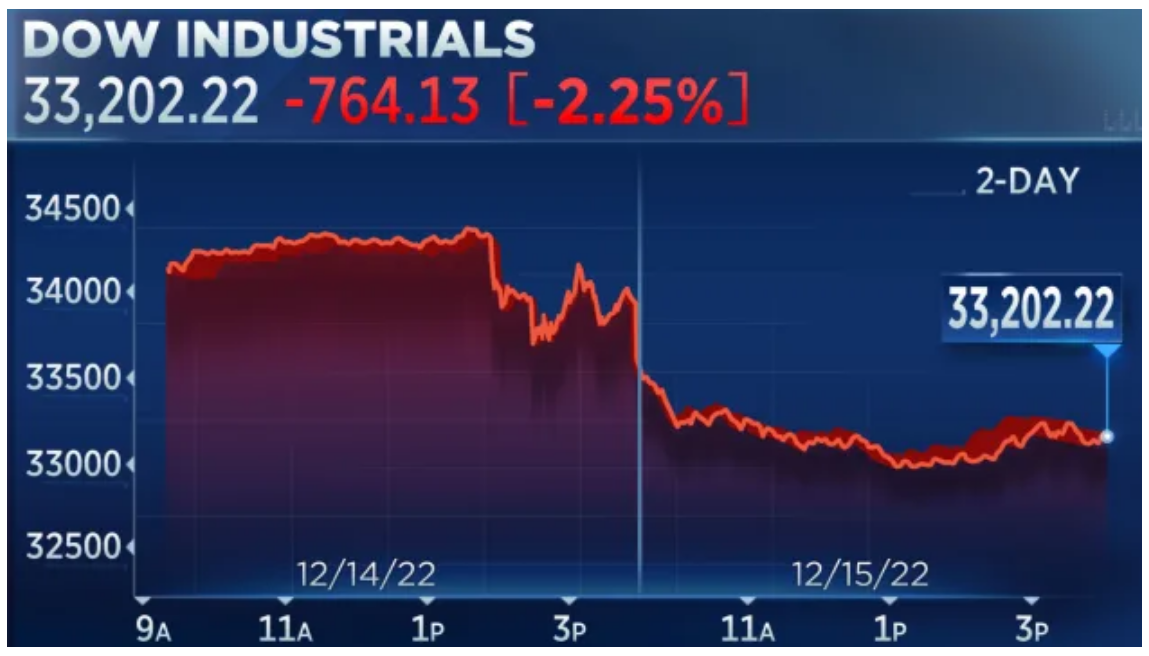 “The equity market’s reaction is now factoring in a recession, and rejecting the possibility of the ‘soft/softish’ landing mentioned recently by Powell” explained Quincy Krosby, chief global strategist at LPL Financial. Thus, the Dow Jones Industrial Average had its worst day in three months, losing 764.13 points in a single trading session.

Interestingly, Krosby draws a conclusion that the perma-bears probably won’t like: “The tug-of-war between the Fed and the markets is squarely on the market’s side: the slowdown is not ‘transitory,’ and the Fed will be forced to act before 2024.” Does this mean that investors should be buying large-cap stocks hand over fist right now?

Not necessarily. Before you load up on entire baskets of stocks through ETFs and mutual funds, bear in mind that if you go down that path, you’re buying overpriced stocks along with cheap ones. Wouldn’t you rather have control over your investments, instead of paying fund managers and ceding your freedom to pick and choose?

Of course, the stock market could go down more – but then, this was true in March 2009 and March 2020, which were terrific times to buy just about anything in the universe of stocks. One sensible strategy is to scale into bargain-priced stocks representing companies you firmly believe in.

Personally, I like to combine technical/chart trading with fundamentals-based investing. I always put fundamentals first, though, as I follow the time-tested principles of great value investors like Warren Buffett and Charlie Munger.

For all of the technical traders out there, you’ll definitely like this chart of Uranium Energy Corp. (UEC) stock. It’s trading at an established support level, and has the potential to double in price to $6.50, as seen in April.

Opportunities like this wouldn’t exist without the fear, loathing and turmoil you’ve witnessed in the markets lately. It might feel good to buy when other people are buying, but that’s not how you get the best possible price.

Naturally, I wouldn’t have looked at UEC stock unless I had thoroughly researched the company, and the uranium market in general, ahead of time. Other stocks I’m looking closely at now include Intel (INTC), First Majestic Silver Corp. (AG), Alphabet (GOOG/GOOGL), and Hive Blockchain Technologies (HIVE).

I encourage you to research these companies and also look at their stock charts. They’re all below their peak prices from late 2021 and early 2022, and that’s scary for fear-driven amateur traders. For clear-minded, successful investors, though, there’s a chance to buy what the amateurs are selling and scale into high-conviction positions for the long term.