Omicron couldn’t stop it. The Fed’s taper threat hardly made a dent. Week after week and month after month, the buyers bought every dip and the S&P 500 kept marching forward to a staggering 4,766.

It was a year to remember as 2021 marked fresh milestones for all major stock-market indexes while some commodities (lumber, natural gas, uranium) went parabolic. And of course, meme stocks like GameStop and AMC made the headlines as social-media traders beat the institutional short sellers at their own game.

Truthfully, it doesn’t take a rocket scientist to pinpoint the biggest tailwind for the equities market during the past year. As Wells Fargo Investment Institute’s Chris Haverland concisely put it, “The markets were supported by… highly accommodative fiscal and monetary policies.”

Perhaps it’s possible to justify large-cap businesses’ high P/E ratios if their earnings growth remains strong. However, there’s no guarantee that this will happen in 2022. If not, then the “weighing machine” of the stock market could put negative price pressure on these stocks. 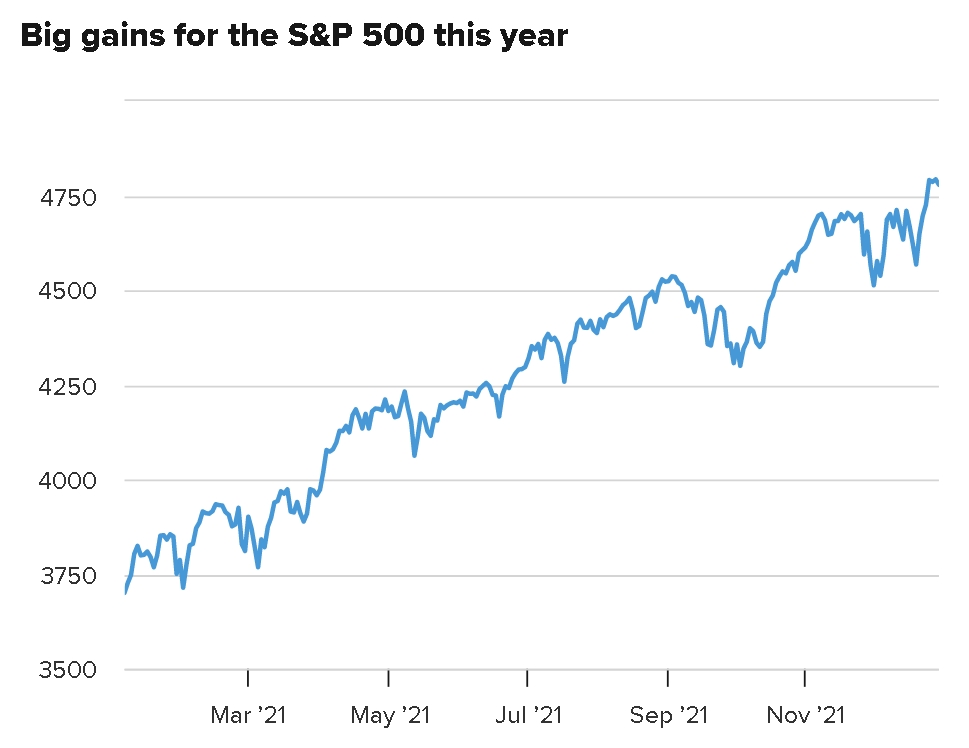 Bear in mind that not all of the stocks in the S&P 500 had such a terrific year. It’s a market-cap-weighted index, so a handful of high-flying tech names (Apple, Amazon, Alphabet/Google, etc.) can hold the index up, and this is even truer when it comes to the tech-heavy NASDAQ.

Ultimately, Haverland’s reference to the Federal Reserve’s monetary-policy bazooka hit the nail on the head. Corporate earnings weren’t enough to produce a chart like the one shown above; stocks needed the Fed’s support in order to achieve a stunning 70 record closing highs.

This mega-accommodative policy didn’t come without a cost, though. Turning the money printer up to 11 since the onset of Covid-19 has led to a shocking yet unsurprising ramp-up of inflation, with the most recent annualized CPI print coming in at 6.8%.

That’s the highest reading since 1982, and it’s only the number that the government allows us to see; the actual inflation rate is undoubtedly much higher than that.

Tragically, high inflation in the U.S. has made an already wide wealth gap much worse, as wealthy stockholders have enjoyed outsized returns on their investments while the mostly uninvested middle class has watched its cash-heavy savings dwindle in value.

In some sub-sectors of the S&P 500, inflation has provided a tremendous boost. The most salient examples in 2021 were energy and real estate, both of which surged by more than 40%. 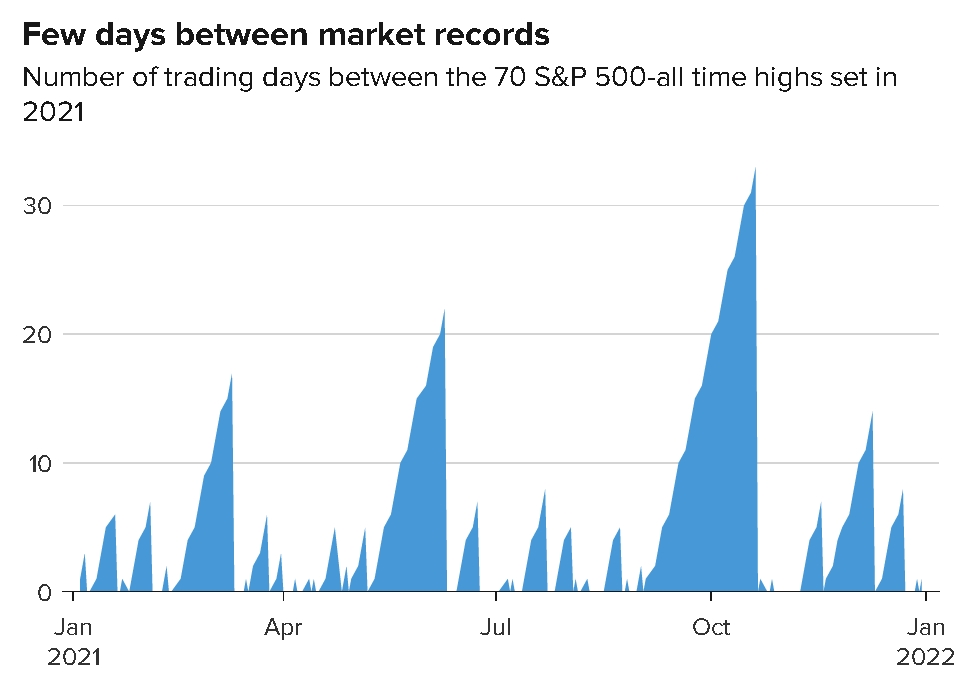 So, if you owned an index fund tracking the S&P 500 or a similar combination of large-cap stocks, congratulate yourself on an exceptional year. Among other things, 2021 will be remembered as a year when big companies only got bigger.

In stark contrast, small-cap companies generally underperformed their larger counterparts. Sameer Samana, senior global equities strategist at Wells Fargo Investment Institute, called it a “rolling correction”: the “S&P has been making new highs, but when you look at the average stock or small cap stocks, they’ve had a very different experience.”

Also, gold and silver spent a number of months during the past year just treading water. Interestingly, neither of those precious metals went on a rocket ride like uranium and some other commodities did in 2021.

That’s not a bearish sign, however, as yesterday’s laggards tend to be tomorrow’s leaders. What was out of favor or largely ignored in 2021 – such as small-caps and precious metals – could rip higher in 2022 as they come back into favor.

It requires forward thinking, and the ability to ignore crowd-think, to understand and capitalize on this concept. If anything will help you beat the market in 2022, it’s out-of-the-box thinking, along with a willingness to find hidden gems while most traders only chase trends.