ALL PAIN, NO GAIN: Bullish Assumptions Smashed at Jackson Hole!

ALL PAIN, NO GAIN: Bullish Assumptions Smashed at Jackson Hole!

On Thursday, traders pumped up all of the major stock market indexes, giving them their best day in several weeks. There was no particularly notable news that day – just the hope, and the assumption, that Federal Reserve Chairman Jerome Powell would sooth the markets with dovish talk the following day.

Well, we all know what can happen when people make assumptions, and when they price in events that haven’t actually happened yet. Things don’t always work out as hoped – it’s the old market adage, “Buy the rumor, sell the news,” but on a grand scale as Powell didn’t deliver what the perma-bulls had expected today.

At his annual Jackson Hole Symposium speech, Powell went so far as to caution that “some pain” may be required to combat inflation. This actually isn’t the first time Powell has used that phrase. In May, the Fed chairman also warned about “some pain” while pledging to consider “moving more aggressively” on rates if inflation does not abate quickly enough.

After the Consumer Price Index declined from 9.1% in June to 8.5% in July, however, some investors jumped to the conclusion that Powell would stop using that type of language and would quell the market with something more accommodative. Today, investors were promptly disabused of that fantasy.

If anything, Powell actually ramped up his aggressive phrasing at the speech in Wyoming today. While maintaining the “some pain” phrasing, the Fed chair also stated the Fed will “use our tools forcefully” to attack inflation – which, even at 8.5% instead of 9.1%, is still running near its highest level in more than 40 years.

Concerning interest rate increases, Powell declared that this is “no place to stop or pause” – definitely not what the bulls wanted to hear after hastily front-running stock prices yesterday. Powell further cautioned that “While higher interest rates, slower growth, and softer labor market conditions will bring down inflation, they will also bring some pain to households and businesses” – which sounds an awful lot like recessionary conditions.

Moreover, Powell is entirely unafraid to do whatever it takes to get inflation down to the Fed’s often-stated 2% target. Just consider how many more interest rate hikes it will take to get from 8.5% to 2% inflation. Yet, “These are the unfortunate costs of reducing inflation. But a failure to restore price stability would mean far greater pain,” according to Jerome Powell.

How long will this process take? Don’t expect the Fed to land the plane anytime in the near future, as Powell said today, “Restoring price stability will likely require maintaining a restrictive policy stance for some time. The historical record cautions strongly against prematurely loosening policy.”

Powell made no bones about the Fed’s role in combating inflation. He almost channeled the spirit of Paul Volcker when he asserted today, “Price stability is the responsibility of the Federal Reserve.” Not that Powell’s Fed will raise interest rates to 15% like Volcker’s did in the 1980s, but Powell’s tenacity nonetheless stunned some unsuspecting investors today. 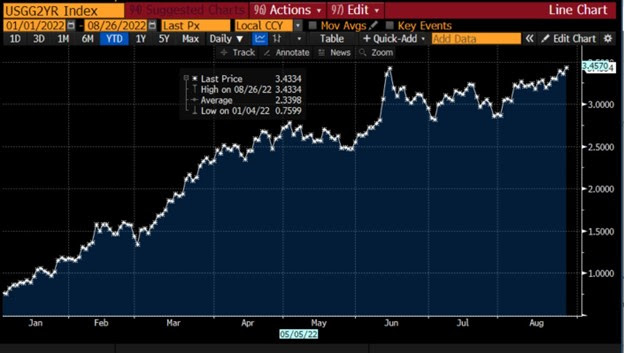 Along with stock traders, bond market traders reacted immediately to the news – which they should have expected all along, really. Short-term yields rose, and multiple yield curves inverted even further than they were already inverted – a potential sign of a deepening recession.

It’s definitely a different scenario than late 2018. As you may recall, at that time Powell’s Fed raised the Fed funds rate to 3%, and then the stock market plunged 20%. Trump yelled at Powell, and the Fed chair immediately reversed course. Interest rates were pushed back down, the stock market rebounded, and it was business as usual for a while.

Don’t expect a similar outcome this time around. For one thing, inflation in 2022 versus 2018 is quite different. Massive stimulus spending put America in this situation, and now Powell feels it’s his responsibility to save the economy by, ironically enough, slowing it down.

And, as investors realized that their “soft landing” assumptions were unfounded, all of yesterday’s stock market gains were wiped out within an hour of Powell’s speech. They bought the rumor yesterday, and they’re selling the actual news today.

They thought one month of CPI improvement would be enough to move the Fed to reverse course – but even Powell knows better than that: “While the lower inflation readings for July are welcome, a single month’s improvement falls far short of what the Committee will need to see before we are confident that inflation is moving down.”

In the end, Powell declared, “We will keep at it until we are confident the job is done.” With that, the pervasive sense of optimism – and the assumption that the Fed would only hike 50 basis points instead of 75 in September, and then pause after that – is debunked, and the markets are deeply disappointed.