ANOTHER ANTI-POT POLITICIAN GOES PRO-CANNABIS: You Won’t Believe This One!

Politicians, once eager to demonize pot businesses, are making U-turns so fast now that it will make your head spin. The changes in American cannabis legislation are coming rapid-fire now, to the point where it’s new news – and good news for cannabis company investors like you and I – on a daily basis.

That’s no exaggeration, as I’ve got multiple monitors running cannabis news feeds, I’m in contact with presidents and CEOs of many of these companies, and I’ve never seen anything like this. It’s exciting, but it takes a great deal of work just to keep up with the flurry of news items. Thankfully, I’ve got you covered and will keep you updated on the most important developments.

After covering finance and government for many years, one pattern I’ve noticed is that politicians will adopt opinions based on what’s advantageous for them – it’s expediency over integrity every single time. It shocked me when I was younger, but now I’ve come to expect it.

Take John Boehner as an example: he was the Speaker of the House back when Obama was president. At that time, Americans weren’t as accepting of cannabis decriminalization as they are today, so it made political sense for him to oppose marijuana legalization on a federal level.

But sentiment has changed over time, as a clear majority of Americans – 62%, according to Pew Research, including 74% of millennials and a majority of Generation X and baby boomers – now support legalizing marijuana. 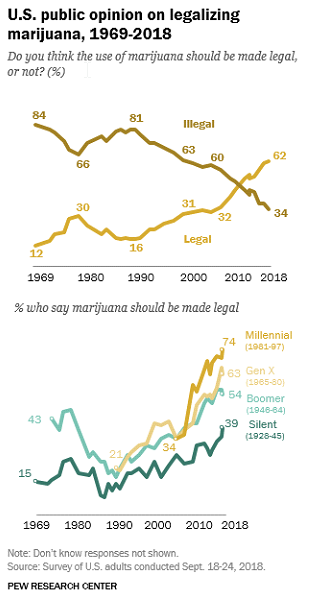 When Boehner took the position of Speaker of the House, it was 2011 and his constituents weren’t quite ready for cannabis legalization yet. In 2009, he said that he was “unalterably opposed” to legalization. It was simply unimaginable that Boehner would ever change his mind on this issue.

In 2018, the unimaginable happened: Boehner joined the board of a cannabis company, tweeting that his “thinking on cannabis has evolved” and that he’s now “convinced de-scheduling the drug is needed so we can do research, help our veterans, and reverse the opioid epidemic ravaging our communities.”

It was a stunning about-face at the time, but in retrospect, it makes perfect sense: the American public favors legalization now and business is booming, so smart politicians are adapting and evolving. And Boehner’s not the only one making the change – you’ll be seeing a lot more of this in 2019.

Case in point: today, the world was amazed to discover that former Vermont Governor Howard Dean is also joining a cannabis company board. In 2003, when he was running for president, Dean said on his campaign Website that decriminalizing cannabis would send “a very bad message to young people.”

Lieutenant Governor David Zuckerman recalls that Dean was “quite opposed to cannabis for medical or any other purpose” at that time – and Howard Dean is now saying that marijuana “is probably not as bad as alcohol” and that “medical marijuana might really have some efficacy.”

Dean also said that “Maybe it would be a good idea if people had a predictable, reliable brand, and not something off the black market,” which I definitely agree with. I’ve actually been recommending a company based on its reliable cannabis brands: C21 Investments Inc. (CSE: CXXI), which has current holdings in the key pro-cannabis states of Oregon and Nevada and is aggressively pursuing acquisitions in California, Colorado, and New Mexico. 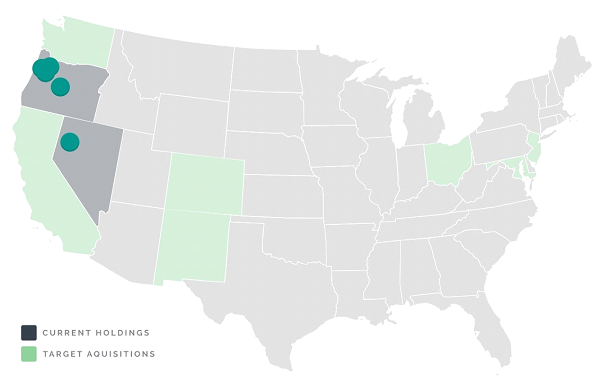 Like I said, a vast majority of millennials support cannabis legalization, and they’ve been a major component of the customer base in these states. C21’s premium brands cater to these mindful consumers, who are willing to spend more when the products are of the best quality.

A perfect example of this is C21 brand Silver State Relief, which opened the first legal dispensary in the state of Nevada and whose flagship location now serves over 1,200 customers per day. They just opened a second shop in Nevada, and the sales are already exceeding projections.

Acquiring brands like Silver State Relief is the quintessential strategy in this rapidly expanding cannabis market: instead of trying to build brand recognition from scratch, C21 forges strategic partnerships with popular and established cannabis companies in states where the product is not only legal, but part of the local culture.

When you add up the combined revenues of Silver State Relief and C21’s other cannabis assets, it’s remarkable how undervalued CXXI shares are. But investors are like politicians: one day they’re reluctant to show their support, and the next day they’re praising cannabis companies to the high heavens.

It won’t be long before the investing community discovers this small company and bids the price up. I personally prefer to accumulate shares before the stock is expensive. Hopefully you’ll get in while C21 shares are still cheap. You can take action today or watch everyone else make money – your move, your choice.