Another Pre-Recession Signal Flashing: Inventories Are Piling Up

The recession indicator that’s been getting people’s attention lately is the 3-month U.S. Treasury yield surpassing the 10-year yield; I myself covered this in depth as well. While it is undeniable that this yield curve inversion is ominous and likely to precede a stock market crash, most of the press (including the alternative media) has missed an equally disquieting and reliable pre-recession signal.

You see, right before the Great Recession of 2008-2009, mountains of unsold goods had been piling up in American warehouses. I’m not just talking about having an extra backlog of products in preparation for the holiday season or “cyber Monday” like they always do nowadays; no, it was a clear and present dearth of consumer spending while businesses continued stocking their warehouses, resulting in a sharp increase in inventory levels.

It’s a pattern that America witnessed and completely ignored in the months preceding the financial crisis, and we’re seeing it again now (and again, ignoring it). American sales to consumers have stagnated while durable goods at wholesalers’ inventories have risen precipitously, causing a steep increase in the inventory-to-sales ratio: 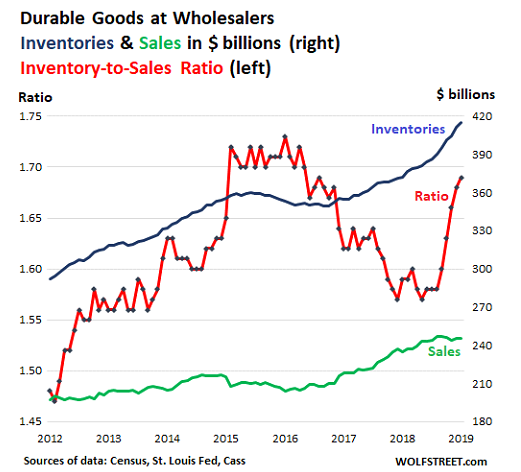 Granted, inventories piling up may temporarily benefit the companies that supply the goods to the wholesalers. Those wholesalers sitting on the inventory and having trouble selling it will, at some point, have to reduce their orders as the stockpiles become unmanageable; as a result, sales will drop all the way up the supply chain.

And here’s a nice little trick the government uses to make this look like a good thing for the economy: the inventory buildup is considered “investment in inventories,” and is added to GDP growth. Hence, while the warehouses are brimming with products they can’t sell, the government gets to brag about national GDP growth.

A quote from Econonoday via FXStreet and Mike “Mish” Shedlock duly explains the broader implications of the inventory excess: “There are few indications of economic slowing that are more convincing than an unwanted build in inventories – and that apparently is what’s underway in the wholesale sector.”

The ripple effects are already noticeable, if we know where to look. When inventory levels get this high, businesses tend to reduce the amount of goods they order from manufacturers. This means a slowdown in manufacturing, which has indeed been taking place over the last couple of months.

As reported by Reuters, “U.S. manufacturing output fell for a second straight month in February… It was the first back-to-back decline since mid-2017.” Chris Rupkey, chief economist at MUFG in New York, provided a response to this dire scenario that made me laugh out loud: “Thank God Fed officials were smart enough to take their foot off the rate hikes accelerator.” 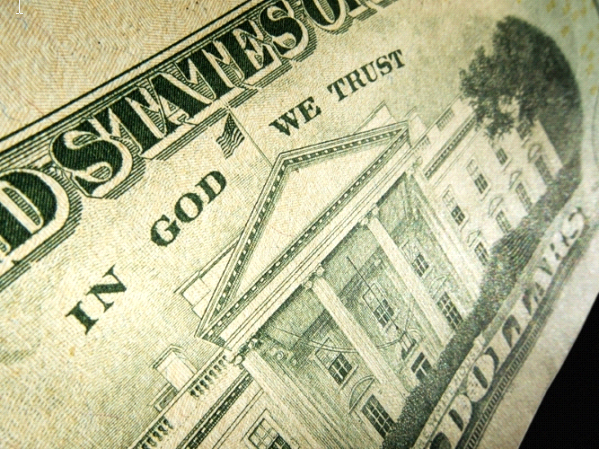 The suggestion that God is guiding the Fed, or that the Fed should be thanked for any of this, is mind-boggling to me, but I’ll let you enjoy Rupkey’s quote for whatever it’s worth in humor value. But don’t get too delirious, because the unsettling news cavalcade isn’t quite over yet. 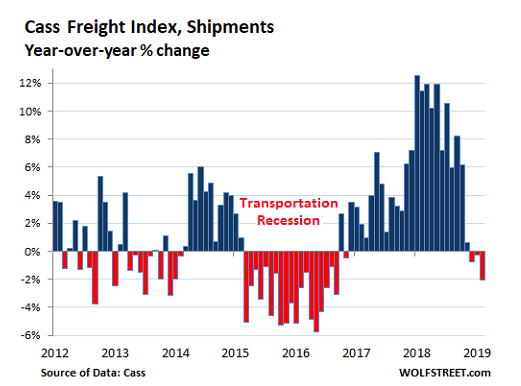 This contraction in the flow of goods across the U.S. adds weight to the recession argument – not only because shipping and transportation are the backbone of American commerce, but because the freight sector only suffers when the broader U.S. manufacturing sector is feeling the pinch. That’s a bad sign for the economy, and no Fed intervention (God-inspired or otherwise) can divorce the markets from the realities of the American economy forever.

Unless sales of goods to consumers see a massive increase very soon, something’s gotta give and we all know who will end up holding the bag: the taxpayers, the middle class, small businesses, and anyone who believed enough in the American economy to invest in a blue-chip stock market index fund.