Be Careful: Stock Traders Completely Misread What the Fed Said

On Wednesday of last week, the major stock-market indexes soared 3%, 4% or even higher after Federal Reserve Chairman Jerome Powell spoke. Judging from the moves in equity prices, one might surmise that a Fed pause or pivot is imminent – but as always, hasty assumptions can lead to capital loss.

Most likely, the huge move in stocks, which was led by technology-sector names like Alphabet and Meta Platforms, was precipitated by short-term traders rather than long-term investors. The effect of short covering can be powerful, but it rarely lasts for more than a day or two.

The problem is that some folks might mistake a short-covering rally for an all-clear sign in the financial markets. I suspect that many traders bought just because they saw other people buying, and didn’t actually hear what the Fed chairman was saying.

In September, the Federal Reserve implied that there would be 125 basis points’ worth of interest-rate hikes during the final two FOMC meetings. And so, we had a 75-basis-point rate hike in November, so mathematically, it would make sense that this month’s hike would be 50 basis points.

In other words, it should have already been obvious that December’s Fed funds rate increase would be 0.5% rather than 0.75%. Yet, financial media pundits acted shocked and euphoric when Powell suggested last week that the Federal Reserve might slow its pace of rate hikes.

Again, 50 basis points in December should have already been known and understood by financial traders. Nonetheless, they jumped for joy – and completely ignored everything else Powell said – when they heard that “The time for moderating the pace of rate increases may come as soon as the December meeting.”

Even if we pretend that Powell didn’t use the qualifier “may” in that statement, investors can’t simply dismiss the Fed chairman’s other proclamations. For one thing, he warned that “History cautions strongly against prematurely loosening policy,” and “The truth is that the path ahead for inflation remains highly uncertain.”

Powell is actually right about the future trajectory of inflation. Sure, the CPI has declined from 9.1% to 7.7%, but a single uptick in inflation could prompt the Fed to return to 0.75% interest-rate raises.

In any case, Powell’s admonition about “prematurely loosening policy” indicates that he has no intention of pausing or pivoting anytime soon. Moreover, Powell complained that inflation is too high and has moved “stubbornly sideways,” and that “we have not seen clear progress on slowing inflation” despite tighter monetary policy and slower economic growth over the past year.

Along with those statements, Powell suggested he would remain data-dependent, saying, “It will take substantially more evidence to give comfort that inflation is actually declining.” Once again, there’s nothing really dovish about the Fed chairman’s tone here.

Speaking of being data-dependent, Powell also observed that wages in the U.S. are growing at a pace that’s going to make it difficult for inflation to come down to the Fed’s 2% target. “We are looking for a restoration of balance between supply and demand in the labor market,” Powell explained. 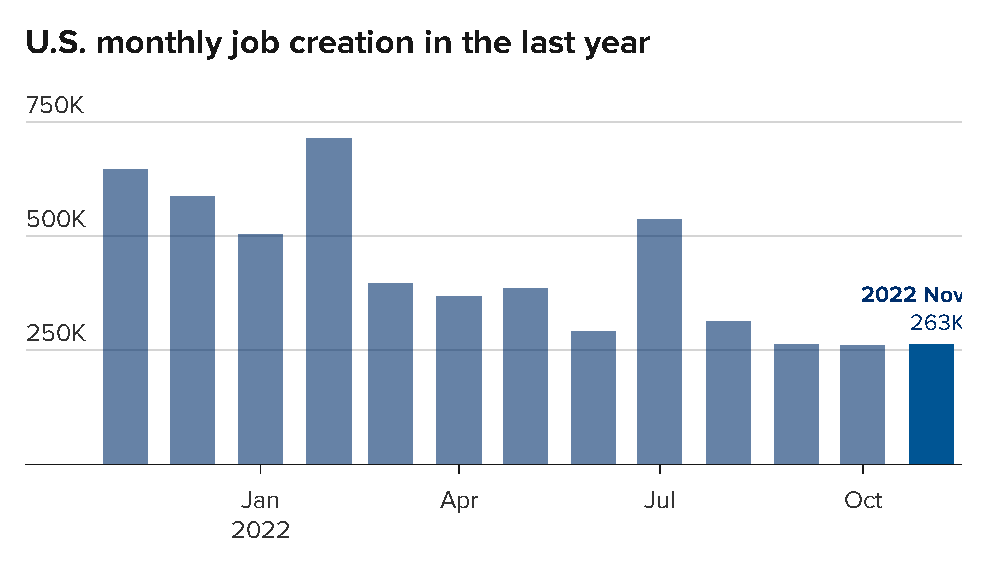 On Friday, the Labor Department issued data that shattered any near-term expectations of a labor-market “balance between supply and demand.” Economists expected a November nonfarm payrolls increase of 200,000, but the actual number was significantly higher at 263,000.

This already shattered any misperception of “a restoration of balance” in U.S. employment, but that’s not all. The Labor Department also revealed that average hourly earnings increased 0.6% in November, which is double the 0.3% economists had expected.

Seema Shah, chief global strategist at Principal Asset Management, summed up what should be construed as a shock-and-awe moment in the financial markets. “To have 263,000 jobs added even after policy rates have been raised by some [375] basis points is no joke,” Shah stated.

The upshot of this, Shah continued, is that “The labor market is hot, hot, hot, heaping pressure on the Fed to continue raising policy rates.” That’s good news for anyone looking for a job right now, I suppose, but large-cap stock investors should temper their enthusiasm.

None of this is intended to suggest that investors should dump all of their stock holdings now. There are still pockets of value, and Crush the Street will continue to identify the best opportunities. Just don’t feel the need right now to buy everything in the Dow, NASDAQ, or S&P 500 – and don’t assume that the media’s euphoria is based in reality.