Beyond Bizarre: Ocasio-Cortez Asks Wells Fargo CEO Why the Bank Is “Financing the Caging of Children”

File this one under the “I couldn’t make this stuff up, folks” category: in a recent congressional hearing, freshman New York Representative Alexandria Ocasio-Cortez stunned Wells Fargo CEO Tim Sloan – and pretty much everyone else witnessing the spectacle – with the question, “Mr. Sloan, why was the bank involved in the caging of children?”

Yes, this actually happened. In a real live session of the United States Congress, broadcasted on C-SPAN and everything. Like I said, I couldn’t make this stuff up.

Not that I relish the idea of defending Wells Fargo; my past articles have made my position on them crystal clear. (Feel free to go here for a sampling of my reporting on this banking giant’s most egregious misdeeds.)

If you’d like to witness the freak show for yourself, feel free to sacrifice your sanity and watch the video here. If, on the other hand, you’d prefer to maintain your sanity along with whatever’s left of your faith in government, I’ll go ahead and summarize the verbal exchange for you: 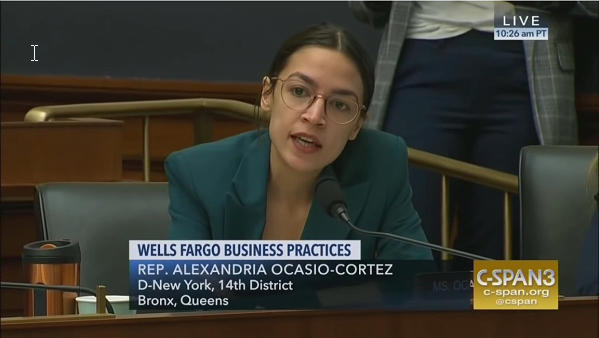 Sloan: (long pause with stunned expression) Uh, I don’t know how to answer that question because… we weren’t.

Ocasio-Cortez: You were financing, and involved in debt financing of CoreCivic and GEO Group, correct?

Sloan: For a period of time, we were involved in financing one of the firms; we’re not anymore, and the other… I’m not familiar with the specific assertion that you’re making, but we weren’t directly involved in that.

Ocasio-Cortez: Okay, so these companies run private detention facilities run by ICE, which is involved in caging children… but I’ll move on. Mr. Sloan, Wells Fargo was also a major investor in the Dakota Access Pipeline and the Keystone XL pipelines, and they were prime investors and lenders to companies building these pipelines in defiance of Standing Rock Sioux’s treaty rights to protect its water and sacred lands.

Anyhow, you get the idea (and besides, that’s as much as my brain could tolerate of this). Now, it is true that Wells Fargo – along with Bank of America, JPMorgan Chase, BNP Paribas, SunTrust, U.S. Bancorp, and other large banks – have financed the private prison companies CoreCivic (also known as Corrections Corporation of America or CCA) and GEO Group.

Collectively, the financing from these big banks to GEO Group was reported to be $450 million, while the financing to CoreCivic/CCA has been reported as totaling $444 million. If Ocasio-Cortez is going to go after banks for financing privatized incarceration, then she’ll need to indict at least ten different financial institutions: 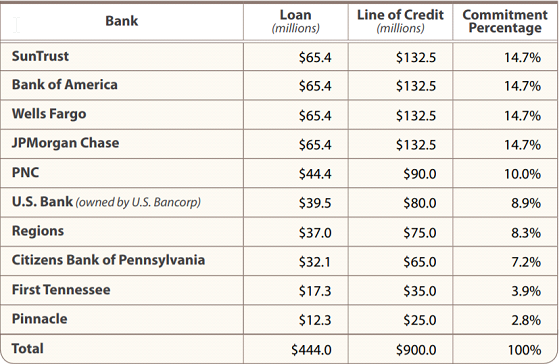 And if she’s going to go after Wells Fargo in particular for financing the Dakota Access Pipeline and the Keystone XL pipelines, then in the interest of consistency she’ll need to also charge at least a dozen other financial institutions with this supposedly grievous offense.

More to the point, Sloan rebutted Ocasio-Cortez’s pipeline-related indictment with simple facts: “We don’t operate the pipeline… We provide financing to the company that’s operating the pipeline.”

Not that being one step removed from the pipeline excuses Wells Fargo from any and all wrongdoing they’ve perpetrated in the past, but it does raise the question of how culpable banks are for the projects they finance but of which they’re not directly involved in the day-to-day operations.

Or, to quote @TheLastRefuge on Twitter, “Should the bank who holds your mortgage be responsible for cleaning your kitchen after a grease fire?” Holding bank CEOs’ feet to the fire in congressional hearings over ideological disagreements concerning environmental and prison privatization issues is a tricky business, and a questionable path to pursue.

Taking her line of reasoning even further to the extreme, Ocasio-Cortez went on to ask Sloan whether Wells Farge is “responsible for the damages incurred by climate change” because of its financing of fossil fuel companies. Again, the grease-fire question seems to apply here.

As for the private prison companies involved in Ocasio-Cortez’s accusation, their responses were swift and direct, with a CoreCivic spokesperson asserting, “We don’t provide housing for any children who aren’t under the supervision of a parent… We also don’t operate shelters for unaccompanied minors, nor do we operate border patrol facilities. Any assertions to the contrary are patently false and misinformed.” 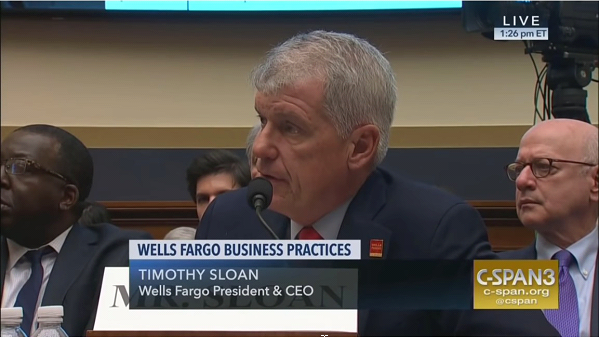 Meanwhile, a GEO Group spokesperson has stated, “This is a deliberate lie driven by an agenda aimed at abolishing ICE, knowing that we have nothing to do with passing, setting, or advocating for or against immigration laws or policies. Our company has never managed facilities that house unaccompanied minors, and we have played no role with policies related to the separation of families.”

Here’s the thing: I take no issue whatsoever with the original intent of the hearing, which the House Financial Services Committee conducted as part of a broad inquiry into the well-established fraudulent misconduct in recent years by Wells Fargo employees.

And it’s worth noting that it wasn’t only Democrats who vented their ire at Wells Fargo, with North Carolina Republican Representative Patrick T. McHenry stating, “Each time a new scandal breaks, Wells Fargo promises to get to the bottom of it. It promises to make sure it doesn’t happen again, but then a few months later, we hear about another case of dishonest sales practices or gross mismanagement.”

In other words, the hearing itself isn’t the issue, as practically everyone agrees that there’s a problem; and if the Committee sought to give Sloan a verbal lashing for Wells Fargo’s actual misdeeds, I say, “Fair enough.” It’s the sudden “caging of children” line of questioning, though, that shifted the tone of the hearing from serious to circus-like and steered the proceedings off the rails.

Therein lies the problem: one politician’s agenda commandeering a legislative proceeding. With this, our government can’t properly prosecute the blameworthy because the proceedings lose their focus, their intent, and their credibility.