Out of context, it hardly makes any sense at all. In a recent interview, Bill Gates said that in the future, there will be 10 Teslas, a Google, an Amazon, and a Microsoft for investors. What’s he talking about?

Gates, the fourth-wealthiest person in the world, made this odd-sounding statement at the virtual SOSV Climate Tech Summit. After declaring that there will be 10 Teslas, he added, “And only one of them is… well known today.”

Since Gates was speaking at a climate-change summit, you’ve probably guessed by now that he was suggesting that climate tech would produce all of those Teslas, the Google, the Amazon, and so on.

Of course, Gates didn’t provide any specifics on which of today’s start-ups might be the next Tesla. Moreover, for “somebody who can’t afford risk or if you expect near-term returns,” Gates added, “I would look elsewhere.”

What investors can do with this prediction is not entirely clear. Naturally, everybody and his uncle wants to find the next Tesla. Amazingly, Tesla stock has doubled in value over the past year and is up over 2,000% in the past five years.

“For the winners, anybody who invested in Tesla is feeling very smart,” Gates said, playing the role of Captain Obvious.

Don’t get me wrong – there are strong growth prospects in the electric vehicle space. A Pew Research Center survey this summer found that while only 7% of U.S. adults currently had an electric or hybrid vehicle, 39% said they were considering an electric vehicle to be the next car they bought.

On the other hand, it’s going to be difficult for any of the “next Teslas” to compete against Tesla. Impressively, during the first half of 2021, Tesla’s share of the all-electric segment of the auto market stood at about two-thirds.

Besides, producing electric vehicles isn’t a new idea anymore and the field is getting crowded. From Nio to Lucid, Canoo to Workhorse, practically every conceivable angle has been covered in the electric car and truck market.

I’m sure that Bill Gates wasn’t thinking about this, but one way to capitalize on the burgeoning ESG movement is to keep it simple and invest in silver. 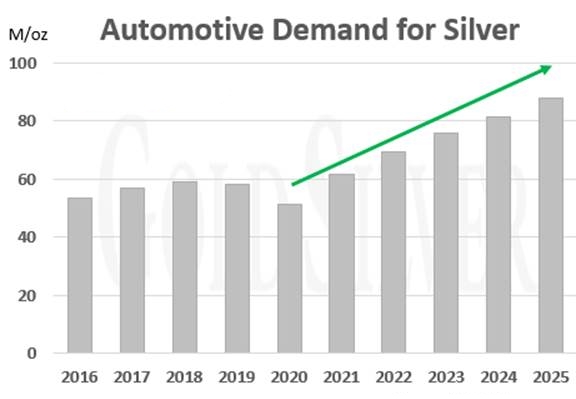 Perhaps some of those 10 Teslas will be silver miners. Bear in mind that both the electric vehicles themselves, and the batteries they run on, typically use silver.

Another possibility is to invest in uranium miners. As more nations commit to using cleaner energy sources in the coming years, governments are turning to nuclear energy as an alternative to fossil fuels.

We can only guess what companies Gates might have had in mind when he made the “10 Teslas” declaration. Referring to climate tech, he said that today it’s “like the early days of software and computing.”

He might be right about that. Personal computing was rudimentary in the 1970’s, and Amazon and Google were in their infancy the 1990’s. Yet, these are massive companies today.

That’s why I recommend that investors should have some “set it and forget it” holdings: high-conviction stocks which they believe in long-term and plan to keep for years or even decades.

Even if Bill Gates’ advice isn’t particularly helpful, we can still extract the kernel of truth from what he’s saying.

Indeed, there will be new Teslas and new Amazons – and some of them will provide the raw materials needed to power the world.