Brace for a Hard Landing!

NO MARGIN OF ERROR: Fed and Americans Better

Brace for a Hard Landing!

The path of righteousness is narrow: it’s a Biblical principle that expresses how it’s not easy to stay on the right path and so easy to stray onto the path that leads to inevitable destruction. It’s a timely principle that can easily be applied to today’s central bankers, who have paved a very narrow and treacherous path for themselves.

Just imagine having to land an airplane that was already running on fumes on a tightrope during a hurricane. This is essentially the Federal Reserve’s task as a veritable maelstrom of events culminates in a “damned if you do, damned if you don’t” dilemma for Chairman Jerome Powell and his colleagues at the Fed.

It’s natural for empathic folks to feel sorry for Powell’s predicament, but don’t shed any tears for the Federal Reserve because it’s a problem of the policymakers’ own making. Remember, the response to the Great Recession of 2008-2009 was to bail out the banks but not their customers, and the response to COVID-19 was to print and spend money into oblivion – which was politically expedient, to be sure, but not sensible for the long term.

Unfortunately, it’s a sign of the times because politically motivated “leaders” typically choose today’s Band-Aid over tomorrow’s prosperity. A case in point would be Democratic California Governor Gavin Newsom and Democratic legislative leaders in the state, who are providing “inflation relief” by sending out stimulus checks of up to $1,050. This is what’s known among rational folks as “trying to use what caused the problem to solve the same problem.” 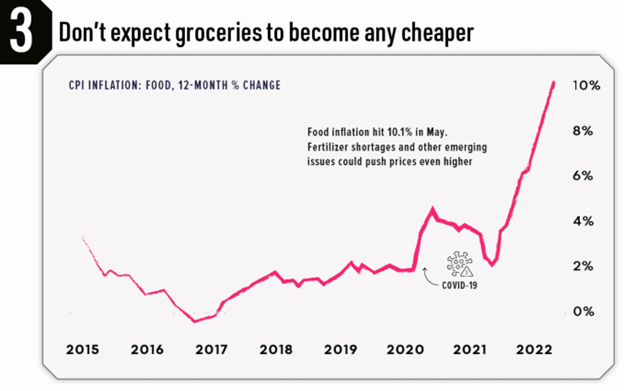 Then COVID-19 happened, and the government responded aggressively – perhaps too aggressively with unprecedented money-printing and spending. America’s sovereign debt load ballooned, and so did the money supply as the government printed up more dollars in months than it had done in the years leading up to the pandemic.

Sure, it was a relief for families to receive a few stimulus checks, but that’s not free money. As I’ve warned many times, there’s always a price to pay when governments increase the money supply. Sooner or later, the already deteriorating dollar was bound to collapse.

This isn’t what Powell wanted, of course. Inflation, measured by the Consumer Price Index, is supposed to be held at 2%, or at least that’s what the Fed chair wants. He already had trouble achieving this objective, even when the economy was stable, because inflation was low during Trump’s prosperous presidency.

Fast-forward to mid-2022 and Powell’s Fed has the opposite problem: getting the inflation rate down, rather than up, to 2%. Heck, Powell can’t even seem to get the annualized CPI down to 8%. He tried to reassure Americans that inflation would be “transitory,” but the numbers don’t lie: the CPI prints were 8.5% in March, then 8.3% in April, and then a shocking 8.6% in May.

The government and central bankers can give excuses all day long, but they’re not the ultimate victims of what’s essentially a tax on everyone. Even if you don’t drive, you’re still paying higher prices on goods that must be shipped by trucks and airplanes while the average gallon of gasoline hovers near $5.

Wherever you look, just surviving with life’s essentials is an expensive proposition. Believe it or not, the U.S. mortgage rate has doubled since the beginning of 2022. Rents are also on the rise, so there’s no way to escape today’s high cost of living.

Amid this self-created backdrop, the Federal Reserve has to somehow tamp down inflation by slowing down the flow of money without inducing a recession. The White House might try to assure you that a recession “isn’t inevitable,” but avoiding a severe economic downturn this year will be as impossible as threading a needle with a baseball bat.

Still, the central bankers will try to stave off a recession – or, more accurately, stagflation of a magnitude the country hasn’t experienced since the 1970s – for as long as it can. This is just delaying the inevitable, which is what governments are known to do when they’ve painted themselves into a corner they can’t get out of.