Buffett Bought Gold Mining Shares. Is He Hedging Against an Imminent Financial Collapse?

It’s not often that you can go to a mainstream financial website and see gold mining stocks dominating the headlines. But when a legendary billionaire investor who used to trash-talk gold is now loading up on mining shares, it’s a news story that the press just can’t resist.

Back in 2011, Berkshire Hathaway CEO Warren Buffett likened gold to a giant, shiny cube that in his opinion was “incapable of producing anything.” A few years later, in 2018, Buffett sarcastically called gold “the magical metal.” So obviously, the Oracle of Omaha didn’t see a gold-sector investment in his future.

Buffett might have scoffed at gold, but the gold price is substantially higher today than it was in 2018 and recently surpassed its peak from in 2011, when he was making his anti-gold comments. This isn’t to disrespect Warren Buffett as he is a highly successful investor, but his track record certainly isn’t perfect.

After all, Buffett has admitted that he doesn’t understand technology and that’s why he didn’t take an early position in tech stocks like Google and Microsoft. That was a mistake on his part, as he could have allowed other, more tech-savvy financial experts to invest in tech stocks on his behalf.

Yet he didn’t do that, and so he missed the boat on the tech renaissance of the 2000’s and 2010’s. Buffett also screwed up with airline stocks this year. He sold off all of Berkshire’s airline-company shares (United, Delta, American, and Southwest) at the bottom during the onset of the coronavirus crisis. Very soon after he did that, those stocks all went up in value.

Looking over Berkshire’s holdings over the past couple of decades, we can discern that Buffett has favored big-bank stocks and avoided precious metals and miners completely. That strategy hasn’t worked out too well for Buffett:

Compared to the significant move in gold, financial-sector stocks have been dead money. So, Buffett’s not in a strong position to continue trash-talking precious metals. I don’t expect him to admit his error like he did with airlines and tech stocks, but Warren Buffett can’t disparage hard assets when they keep proving him wrong.

If he won’t admit his mistake with gold, could Buffett at least switch up his investing strategy now that the gold price is clearly moving north? With the U.S. government cranking up the money-printing machine to pay for massive coronavirus relief funds, there’s no doubt that the dollar will lose value and gold will continue its bull run.

And could Buffett, again without admitting it verbally, finally start to unload some of Berkshire’s underperforming big-bank stocks? As it turns out, an SEC 13-F filing revealed that Berkshire reduced its position in JPMorgan, Wells Fargo, PNC Financial, M&T Bank, Bank of New York Mellon Corp., Mastercard, and Visa, and sold all of its Goldman Sachs stock.

But here’s the real kicker: the same man who, back in 1998, declared that gold “has no utility” now owns nearly 21 million shares of Barrick Gold, a position worth $563.5 million at the time of purchase. Talk about an abrupt U-turn – the financial media was stunned to see Berkshire Hathaway taking a big stake in a gold miner.

In fact, while Buffett did add to some other positions (Kroger, Store Cap, and Suncor Energy), Barrick Gold was Berkshire’s only new position in Q2. As you would expect, this news item immediately trended on social media. Rich Dad, Poor Dad author Robert Kiyosaki pulled no punches in his assessment of Buffett’s about-face: 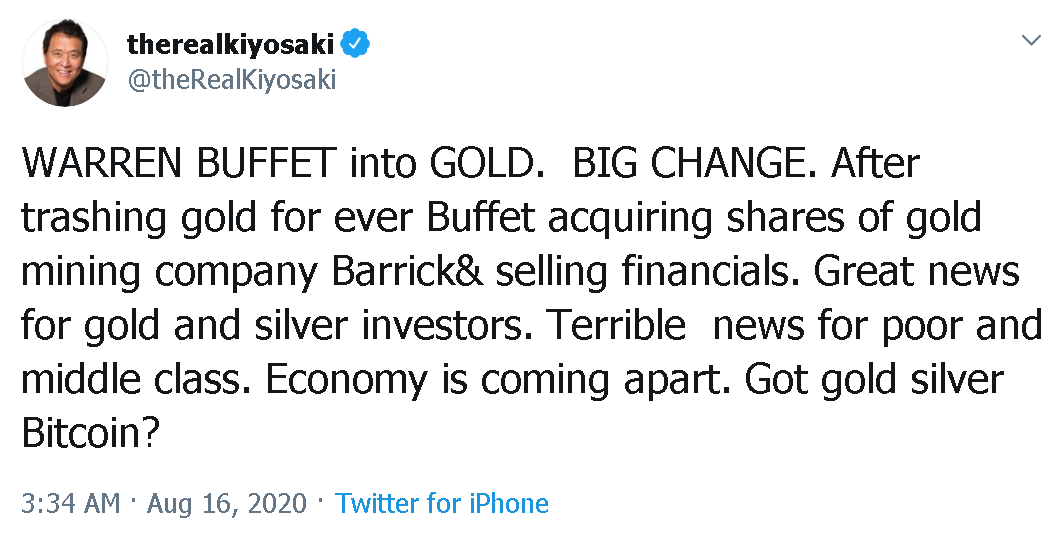 As usual, Kiyosaki sees what many others unfortunately don’t. Warren Buffett’s purchase of gold-mining and his dumping of financial stocks are emblematic of a negative outlook on the U.S. dollar and on the state of the economy.

Every purchase and sale that Warren Buffett makes is, in effect, a statement of where he thinks the economy is headed. Clearly, he doesn’t believe that mega-banks can earn strong returns on their loans in an ultra-low interest-rate environment.

Buffett is also, through his actions rather than his words, expressing an opinion on high-flying stocks versus underpriced commodities. He didn’t add any tech stocks, and that’s a loud and clear statement that Warren Buffett, value investor extraordinaire, doesn’t see them as a strong value now.

He does see Barrick Gold’s value, though, and that’s encouraging for mining-share investors everywhere. We didn’t need the Oracle’s stamp of approval, but the Buffett boost is a welcome event nonetheless.

You should never base any investment decision off of our emails. CrushTheStreet.com stock profiles are intended to be stock ideas only, they are NOT recommendations or endorsements. CrushTheStreet.com is owned by the same owners as Future Money Trends LLC and affiliates. The ideas we present are high risk and you can lose your entire investment. We are not stock pickers, market timers, investment advisers, and you should not base any investment decision off our website, emails, videos, or anything we publish.  Please do your own research before investing. It is crucial that you at least review the referenced companies’ SEC filings, especially the risk disclosures, and also read their latest press releases. Information contained in this profile was extracted from current documents filed with the SEC, the company web site and other publicly available sources deemed reliable. Again, you should not make any investment decision based on information from our website, emails or publications. We have been compensated one hundred thousand dollars for a current thirty day marketing campaign. You should know that we have previously been compensated by Gold X Mining for online marketing campaigns that have since expired. We are currently engaged with the company for a fifty thousand dollar campaign that expires in ninety days. We also own one hundred and twenty five thousand warrants that we received via a private placement we participated in last year, the warrants are priced at two dollars and eighty cents.   We may sell the shares at any time but currently expect that any such sale will be ten or more days after the date of this communication. Our report is not intended to be, nor should it be construed as an offer to buy or sell, or a solicitation of an offer to buy or sell securities, or as a recommendation to purchase anything. This publication may provide the addresses or contain hyperlinks to websites; we disclaim any responsibility for the content of any such other websites. Please use our site as a place to get ideas. Enjoy our videos and news analysis, but never make an investment decision off of anything we say. Please review our entire disclaimer
at CrushTheStreet.com/disclaimer.