Chain Reaction: This is the Butterfly Effect!

One of the first major investments I ever made was for my first condo that I lived in and brought my first two children home to and shared many amazing memories with my family in. It was not a paper trade that I was disconnected from. My hands were on the plow and I felt every ounce of energy throughout that transaction, and rightfully so. It was my first home, and it was very material for me.

It shouldn’t surprise you that Americans spend an average of 37% of their income on housing. And in some cases, it’s much more.

Bubbles on the Horizon

When American home price growth peaked at 6.6% in April of last year, scarcely any mainstream media analysts were expecting a bursting of the housing bubble. It’s yet another example of how short their memory is – and how markets refuse to learn the dire lessons of the past.

To modify a famous stock market quote, when your Uber driver tells you that he’s flipping houses for secondary income, you know it’s time to run for cover. Back in 2008, right before the worst real estate market crash in our lifetime, the rate of house flipping (defined as owning a home for less than two years before reselling it) was 11.3%; in Q1 of 2019, it raised pre-crisis red flags once again at 10%.

In fact, we’re already seeing the signs of an overheated housing market start to break down. As CoreLogic deputy chief economist Ralph McLaughlin reports, “The U.S. housing market continues to cool, primarily due to some of our priciest markets moving into frigid waters,” with 35% of the country’s 100 largest metropolitan areas having an overvalued housing market in March 2019.

The real estate market is experiencing the effects of gravity in 2019, it seems, as home prices increased only 3.7% year-over-year in March, according to the latest data from CoreLogic. It’s a disappointing number, and quite possibly the beginning of a discouraging trend in the market: 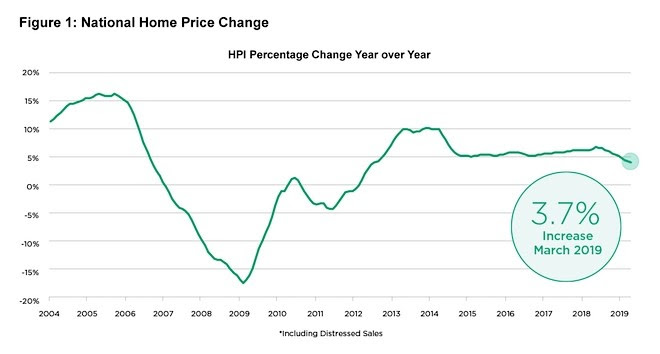 The fact is that an overheated real estate market means that folks simply can’t afford the cost of homeownership. In the words of CoreLogic President and CEO Frank Martell, “The cost of either buying or renting in expensive markets puts a significant strain on most consumers.”

Millennials and other demographic segments are facing the reality of stagnant wage growth in America, which is hurting the real estate market. With rent at astronomical prices in many metro cities, it’s nearly impossible for individuals to put away enough savings to even have a down payment for a house and get beyond the barrier to entry.

And if the outlook is bleak for potential buyers, it’s even worse for sellers as the reality of an overpriced market hits home. Month after month, sellers are seeing their homes sit on the market with more and more buyers simply opting out because they’re increasingly unable to afford the recent run-up in home prices.

With the mortgage application volume recently declining 4.3% from the previous week according to the Mortgage Bankers Association’s seasonally adjusted index, forecasts are looking gloomy amid a supply glut and a demand shortage in the real estate sector. And as we learned during the previous financial crisis, the American economy is interconnected, with a housing market meltdown bound to impact other economic sectors.

The potential for a vicious cycle is quite real, as falling home prices will discourage investment and building of new homes, thereby weighing down the construction sector and impeding economic growth overall. Numerous industries will be impacted: people buying fewer homes means that they’re buying less furniture, and they’re less likely to buy a second automobile if they don’t have a two-car garage.

Moreover, because people’s number-one form of wealth is in their homes, people spend less overall when their home prices decline. It’s a devastating chain reaction because the nation’s economy suffers when fearful consumers stop spending money. Even big banks will feel the pinch because falling home prices lead to a decline in bank lending, while an uptick in home repossessions will cause major problems for lending institutions.

Home price declines in 1990 and 2007 preceded economic recessions; is the real estate market once again proving to be the proverbial canary in the coal mine? It’s cause for concern no matter how you look at it: in American real estate and the broader economy, the house of cards is as fragile as ever.

Stay prudent and be diversified when it comes to your wealth.

If you haven’t invested in any lending platforms, I would recommend looking at PeerStreet.com for a great way to invest in loans that are very conservative considering their debt to equity ratio minimums still giving investors 7-8% returns on their money…