CHINESE CHAOS: Rampant Inflation and the Blood in the Streets Moment!

In a market that’s supposed to be global in scope, the S&P 500 and NASDAQ have been astounding resilient to turmoil abroad over the past decade. It’s as if China catches the flu when the U.S. sneezes, but never the other way around.

This odd correlation, or lack thereof, wasn’t meant to last forever. China’s “Lehman moment” is the news that the U.S. markets can’t just sweep under the rug: Evergrande isn’t too big to fail, but it is too big to ignore.

Asset manager Jim Chanos said it best: “There’s lots of Evergrandes out there in China – Evergrande just happens to be one of the biggest… The whole Chinese property market is on stilts.”

Of course, one could argue that the U.S. market has been on stilts since 2009. And by the way, Chanos predicted the Enron collapse, so he’s well attuned to the warning signs of a bloated business in decline.

After all, it’s not hard to hear echoes of Enron, Lehman, and Bear Stearns as Evergrande shoulders liabilities exceeding $300 billion. Bear in mind that residential real estate is a linchpin of the Chinese economy, much more than it is in the United States, so there’s no simple “unwind” here.

The blood in the streets analogy is apt here, though we can also think of a series of dominoes falling one by one. Less than a week ago, Chinese realtor Sinic Holdings crashed 87% in Hong Kong as investors feared of a slowdown in the nation’s real estate sector.

Not that President Xi Jinping and the People’s Bank of China are going to let the economy go down without a fight – far from it.

In a move that would impress Jerome Powell and his cronies, the PBoC implemented the biggest one-day liquidity injection since February, adding more than 10 billion yuan into the banking system on a single day: 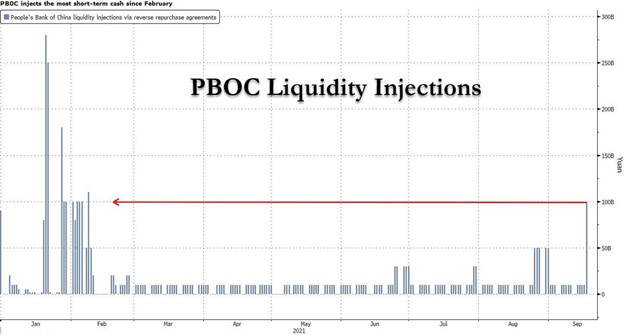 All told, China’s central bank added 100 billion yuan ($14 billion) of funds on a net basis through 50 billion in seven-day and 50 billion in 14-day reverse repurchase agreements.

Not that everyone – or anyone – is reassured by this. Both Morgan Stanley and Goldman Sachs have slashed their forecasts for the Chinese property industry, citing the potential of an Evergrande default to disrupt the company’s suppliers, other developers, and the financial markets generally.

And even with the U.S. market’s remarkable ability to shrug off international woes, no economy is so insular that it can withstand a full-scale Chinese depression.

Even if you’ve never kept track of the Chinese property market, this can and will affect your finances one way or another. What you’re bearing witness to is an unusual confluence of events: U.S. retail sales rebounding unexpectedly while dollar inflation, which took a quick pause to re-fuel, is returning to the conversation. 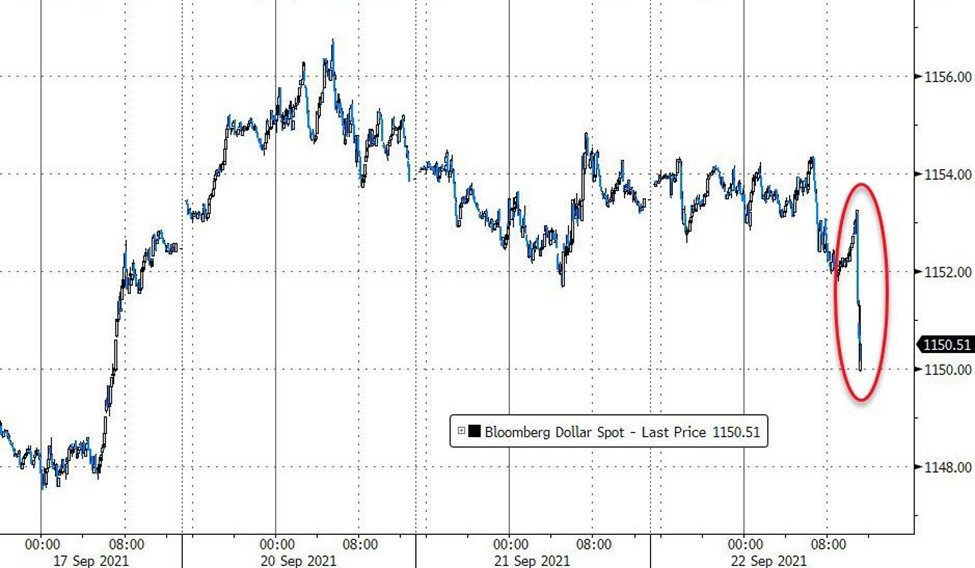 It really didn’t take much to get the dollar back to its inevitable downward path. Federal Reserve Chairman Powell only had to remind everybody that tapering is different from hiking interest rates, and that even when the tapering starts, the Fed will be “well away from satisfying the liftoff test.”

The market’s knee-jerk reaction was to dump the dollar and buy up everything in sight: stocks, commodities, cryptocurrencies, you name it. Risk-on was back in style again, at least for the moment.

Meanwhile, the Fed effectively had no choice but to increase its inflation forecast for the year. The central now sees inflation running to 4.2% this year, significantly higher than the Fed’s prior estimate of 3.4%.

Really, that’s less of an estimate of what’s going to happen, than a poorly played game of catch-up to what’s actually happening. The U.S. annualized inflation rate has been 5% or higher for the past four months, so anything the Fed has to say about that should be taken with a huge grain of salt.

And so, even if the known black swan events (Evergrande collapse, debt ceiling limit breached, global supply chain issues, etc.) don’t have bring down the whole house of cards, you can always count on inflation to move asset prices across the board.

In actuality, it’s not the ideal strategy to wait for a blood in the streets moment to start investing. Anti-inflation assets perform well throughout various market cycles – no waiting required to take a position.

Plus, you don’t need to have a black belt in dot-plot interpretation to understand that gold and cryptocurrency are prime opportunities as central banks ramp up their inflation projections. 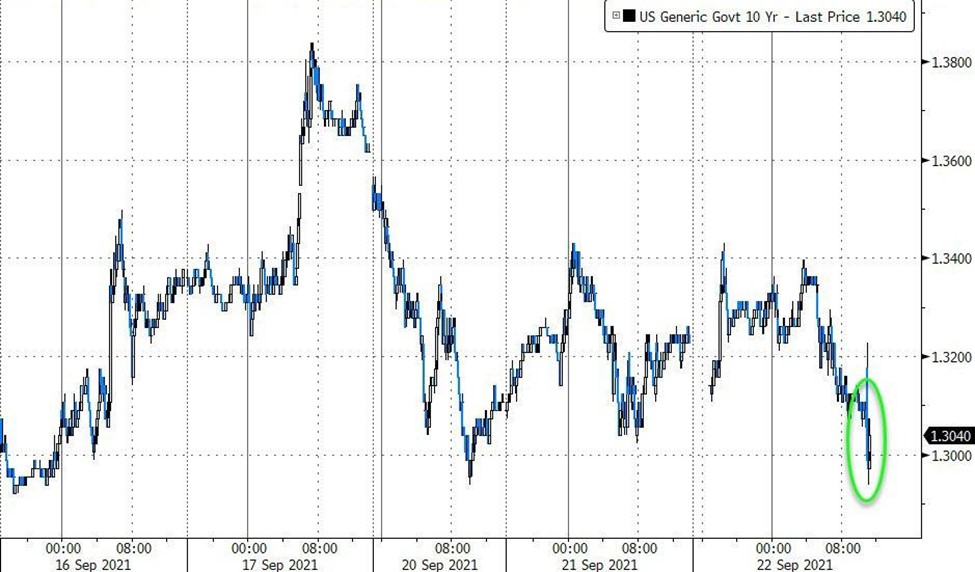 Any price spikes in the dollar are a mirage, and so are the fears of a Fed rate hike. Bond yields will be kept low for the foreseeable future, simply because there’s no alternative.

So as always, if you want to know where the financial markets are headed, keep your eye on the dollar. Don’t trust the head-fakes any more than you’d trust the Fed to promote your best interests – and consider gold and crypto as your best protection in a trust-less world.

We are not brokers, investment or financial advisers, and you should not rely on the information herein as investment advice. We are a marketing company and are paid advertisers. If you are seeking personal investment advice, please contact a qualified and registered broker, investment adviser or financial adviser. You should not make any investment decisions based on our communications. Examples that we provide of share price increases pertaining to a particular Issuer from one referenced date to another represent an arbitrarily chosen time period and are no indication whatsoever of future stock prices for that Issuer and are of no predictive value. Our stock profiles are intended to highlight certain companies for YOUR further investigation; they are NOT stock recommendations or constitute an offer or sale of the referenced securities. The securities issued by the companies we profile should be considered high risk and, if you do invest, you may lose your entire investment. Please do your own research before investing, including reading the companies’ SEDAR and SEC filings, press releases, and risk disclosures. Information contained in this profile was provided by the company, extracted from SEDAR and SEC filings, company websites, and other publicly available sources. We believe the sources and information are accurate and reliable but we cannot guarantee it.