Clearing the Air: Why Did Stocks Rise and Precious Metals Fall?

In the long term, all assets will eventually be priced at their fair value. This is the “weighing machine” of the markets. When you’re only looking at short-term price moves, however, sentiment is the main driver and not everything is going to make logical sense.

Consider, for example, how the NASDAQ rose for five consecutive days last week. This happened even as a stronger-than-expected jobs report was issued on Friday, indicating that the Federal Reserve will likely continue on its current path of aggressive interest-rate hikes.

There’s more than one way to interpret the data, though. June’s nonfarm payrolls increased 372,000, exceeding the Dow Jones estimate of 250,000. Taking a glass-half-full view – and assuming you believe that the jobs data from the Bureau of Labor Statistics is accurate – it’s possible to put a positive spin on the employment report.

For the moment, at least, good news was good news again. This stands in stark contrast to the first half of 2022, in which there was nothing but bad news as inflation ramped up to a previously inconceivable 8.6% and gas prices hit $6 per gallon in some U.S. states.

On Main Street it’s evident that we’re in a recession already, even if Wall Street refuses to acknowledge this. What’s lifting stocks lately is a market that’s so forward-looking that it’s trying to be not just one, but several steps ahead.

Traders on Wall Street are pricing in an imminent recession and then the Federal Reserve’s response to it, which will undoubtedly be massive. As the Fed pulls out its liquidity-injection bazooka, aggressive interest-rate hikes will be on pause and there may even be rate cuts later this year. 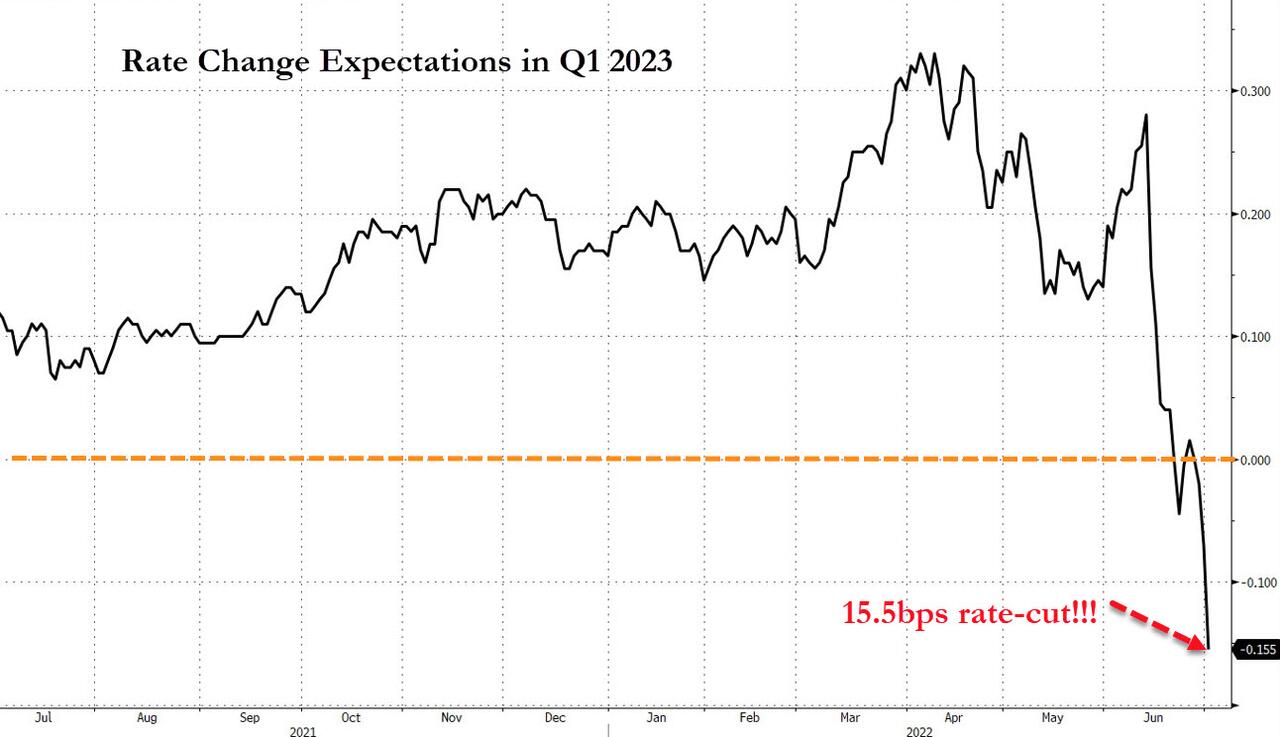 At the latest, investors are fully expecting huge rate cuts early next year. They’re thinking that stocks will shoot higher when that happens, so they’re already hoarding stocks in anticipation of a return to QE.

The problem with this several-steps-ahead approach is that people are buying stocks, knowing that a recession is underway. Wouldn’t it make more sense to let the recession happen, buy stocks at much lower prices, and then hold them in anticipation of the Fed’s inevitable dovish pivot?

It can get confusing when everyone’s trying to leap-frog over everyone else, but that’s how insanely efficient the financial markets have become nowadays. There’s no “wait and see” anymore as computer programs have made trading instantaneous and overly reactive.

It also appears that the market is pricing in an eventual easing of commodity prices, and particularly oil and natural gas. WTI crude oil remains elevated, but natural gas prices backed off somewhat and this undoubtedly led some investors to assume that oil prices will fall as well.

That’s not a wise assumption to make, however, as the White House continues to commit to sending America’s fossil fuels to Europe while allowing domestic prices to surge. At the same time, a hostile regulatory framework continues to dis-incentivize oil and gas drilling in the U.S., so high prices at the pump are likely here to stay.

Additionally, it’s not safe to assume that falling fuel prices – if that actually occurs – would be enough to buoy the stock market. Ultimately, strong corporate earnings are foundational to financial-market stability, and the data doesn’t bode well for the remainder of 2022’s earnings events.

In other words, don’t hang your hopes on a “soft landing” for the economy. The NASDAQ performed well for a week, yes, but this doesn’t establish a long-term trend and head-fakes are common during sustained bear markets.

Then there are precious metals, which can’t seem to get off the ground lately. This is attributable to the U.S. dollar’s strength – or more accurately, its perceived strength compared to other world currencies. Basically, the dollar is the cleanest shirt in a room full of dirty shirts.

It’s still fiat money, though, backed by a government that won’t stop printing and spending its currency units. Just remember during these challenging times that gold and silver benefit from high inflation, but the effect isn’t always immediate.

Gold and silver aren’t the only metals that fell recently, by the way. Copper also corrected, and that’s not a positive sign for the U.S. economy. There’s also the inversion of the 2-year and 10-year Treasury notes to consider. The signs are piling up, and the dollar’s day in the sun won’t last forever – and precious metals will still be there, solid to the touch and rich with enduring value.