A market that sees everything through rose-colored glasses can’t last forever, but this bull market is at the tail end of an experiment in pushing the limits. A full decade in, it has become apparent that global debt burdens don’t matter anymore – at least for now, until the house comes crashing down.

The ability of the stock market to climb the proverbial wall of worry is truly extraordinary, with global geopolitical turmoil barely making a dent and all dips (like the mini bear market from the end of last year) recovering immediately and sharply in V-shaped rallies precipitated by the not-so-invisible hand of the Federal Reserve.

Meanwhile, the National Debt Clock marches upward unabated: located in the heart of New York City, observers can see the red digits of the Debt Clock whizzing by 24-7. It passed $22 trillion with little fanfare and hardly any coverage in the corporate media, who would prefer that the citizens just ignore it and continue buying blue-chips stocks and government bonds.

The National Debt Clock only measures America’s sovereign (government) debt, but doesn’t include household and corporate debt, which are also mounting apace. It also doesn’t measure global debt, which is moving upwards in tandem with the stock market.

The facts cannot be denied: global debt is higher now than it was even during the reckless run-up to the financial crisis of 2008-2009. Data provided by S&P Global Ratings reveals that corporate, government, and household combined debt stood at $178 trillion as of June 2018, representing an increase of 50% from a decade ago.

The worst offenders, unsurprisingly, are governments. Aggregate debt at the government level, according to S&P Global Ratings data, reached an astonishing $62.4 trillion – 77% higher than it was prior to the financial crisis of ten years ago.

It’s bad news no matter how we measure it. Take the debt-to-GDP ratio of the United States, for instance: in 2007 it stood at slightly above 60%, and the most recent measurement has the ratio at more than 100%, meaning that the nation owes more than it’s producing. 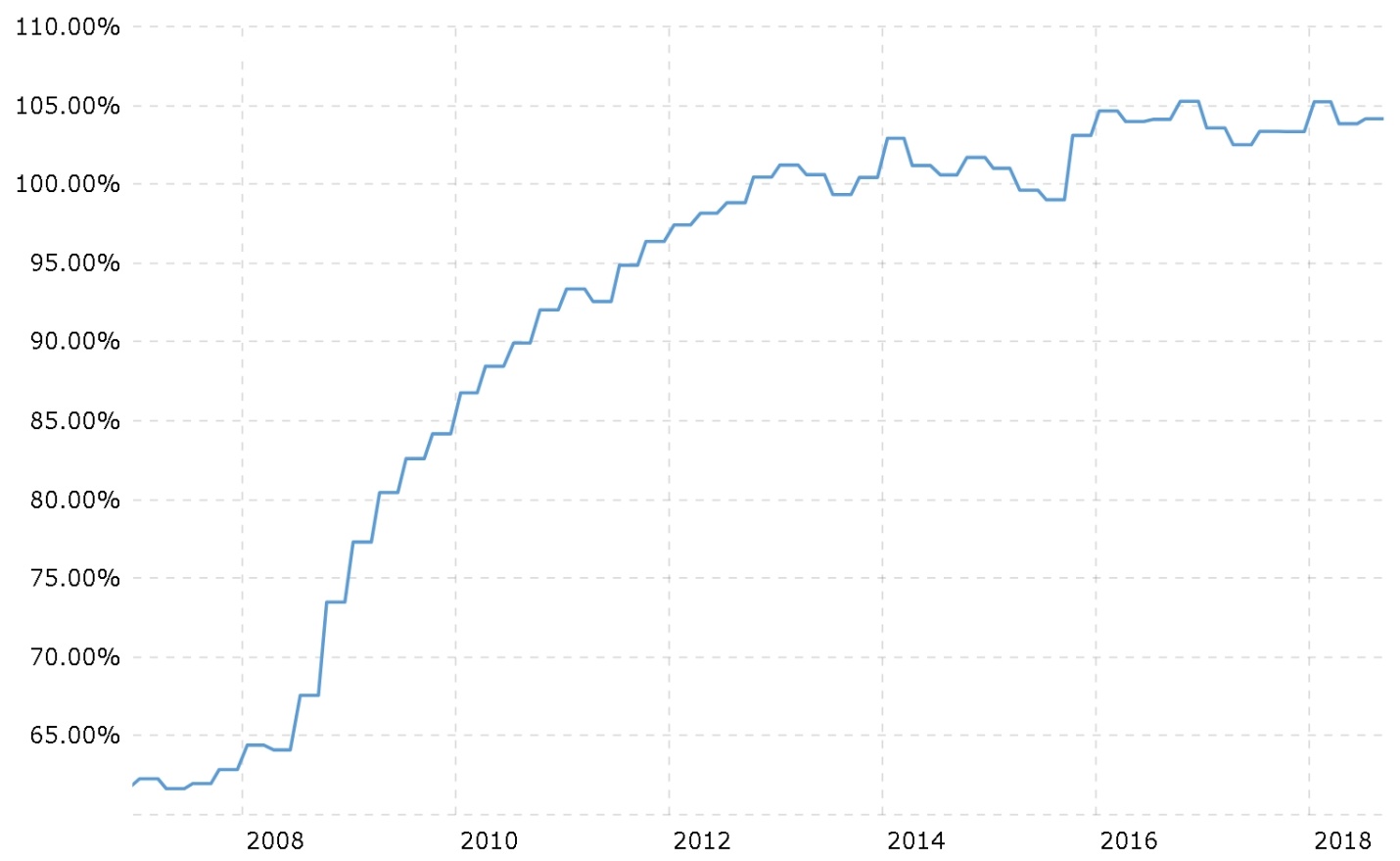 This state of affairs is only likely to get worse if the current trends continue unchecked. In particular, the ratio of publicly held debt-to-GDP is projected to go as high as 193% by 2049 under current governmental policies, according to data from the Brookings Institution.

The issue isn’t only with the size of the debt, but also with the increase in the rate of its accumulation. Regarding this, the Peterson Foundation noted that the U.S. national debt has risen by $1 trillion in the past 11 months, calling this “the latest sign that our fiscal situation is not only unsustainable, but accelerating.”

Moreover, “we already pay an average of $1 billion every day in interest on the debt, and will spend a staggering $7 trillion in interest costs over the next decade,” asserted Michael Peterson, CEO of the foundation. These disheartening statistics indicate that our debts are likely to persist for a very long time, if not forever.

And while the equities markets continue to grind upwards, the world remains awash in debt at all levels: “Global debt is certainly higher and riskier today than it was a decade ago, with households, corporates, and governments all ramping up indebtedness,” explains S&P Global Ratings credit analyst Terry Chan.

The level of corporate debt has been especially alarming: globally, companies have amassed $23.8 trillion in debt since the financial crisis, an increase of 51%. By itself, the United States carried a $14.9 trillion mountain of corporate debt in 2018, outdone only by China’s $20.3 trillion.

Shamefully, you’d be hard-pressed to find a mainstream media platform – not to mention the government or the Federal Reserve – sounding the alarm on the global debt contagion. It’s a silent, gradual, insidious killer of the middle class and the American Dream as personal, corporate, and sovereign debts keep us enslaved to our creditors for the foreseeable future.

The so-called “quantitative easing” central bank policy that emerged after the Great Recession has precipitated the spending spree and debt accumulation, while simultaneously propping up the equities markets by forcing savers, investors, and retirees into a highly risky stock market just to get yield that outperforms the rate of inflation

It was a temporary fix that persisted into a long-term, unsustainable monetary policy: “Due to extremely low interest rates, the past decade has seen a migration of investor flows into speculative-grade and non-traditional fixed-income products,” observes S&P Global Ratings. “These markets tend to be less liquid and more volatile, and could seize in the event of a financial shock or panic.”

Looking at household debt, the research reveals that it has risen in an unexpected place: China, where in the past decade the aggregate level of household debt has ballooned to $6.6 trillion – a mind-boggling 716% increase.

And now we’re starting to see echoes of the irresponsible behavior that precipitated the financial crisis of a decade ago: ultra-low-grade debt is, regrettably, back in vogue. The triple-B category of near-junk debt has seen a 170% increase since 2008, raising the specter of widespread loan defaults and resultant shock waves throughout the economy and markets.

Also in the category of ultra-low-grade debt concerns is the rising trend in the issuance of “covenant lite” leveraged loans, which are given to corporate borrowers with poor credit profiles and thus a low probability of timely repayment to investors; unbelievably, these “cov lite” loans now make up 79% of the $1.14 trillion corporate loan market.

If the widespread issuance very-high-risk loans sounds like a familiar problem, bear in mind that this type of reckless creditor behavior is, in large part, what triggered the Great Recession and its associated bear market. And now that we have a stock market that’s gone up 400% since the 2009 bottom, there’s plenty of room to fall and catalysts aren’t hard to find.

The real catalyst, though, is the behavior of world governments and central banks who refuse to acknowledge serious cracks in the foundation of our fragile economy. The stock market hasn’t priced in this reality, but it will at some point – it always does, sooner or later.