Connecting the Dots: A Message to Anyone Who Doesn’t Own Gold Yet

If you’re at a gathering or get-together with friends, co-workers, or family members, and someone mentions that they own gold or silver bullion, that will sometimes bring the conversation to a screeching halt – not because it’s offensive to anyone, but simply because most people don’t understand the importance of gold ownership.

Indeed, most folks haven’t considered taking charges of their own finances, not to mention investing in an alternative to the investment plan offered by their workplace or an investment advisor at a bank. They have no earthly clue how much risk they’re exposing themselves to.

Your average returns of maybe 8% per year would have ended with a massive drawdown, wiping out multiple years of gains. The market crashes starting in 2000 and 2008 were around -50%: is that any way to enter into your golden years?

Employer- and advisor-facilitated investment plans will frequently mix U.S. bonds with S&P 500 style portfolio allocations, often to the tune of 60% stocks and 40% bonds with periodic rebalancing. However, the Federal Reserve has suppressed bond yields to the point that they’re no longer useful as an investment tool: 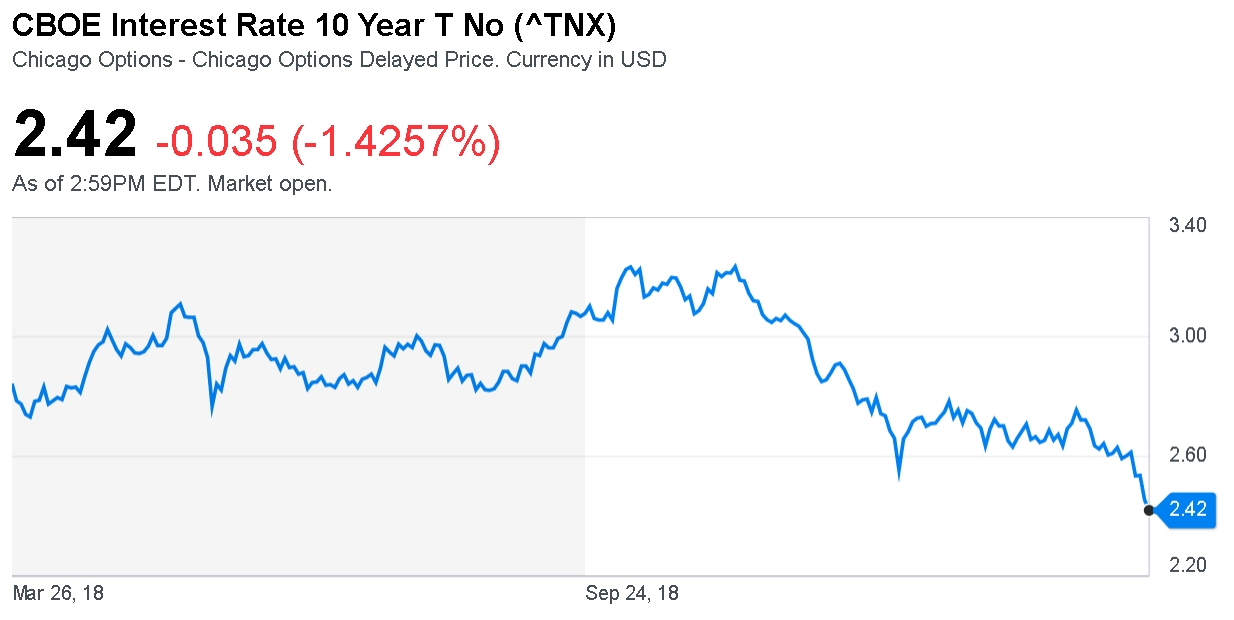 Let’s think about what 2.42% annual yield really means. With inflation (supposedly, according to the government) at 1.7%, it’s unusually low and pretty much has nowhere to go but up. But let’s pretend, for argument’s sake, that we live in a magical world where inflation actually stays at 1.7% over time.

Even in that best-case scenario, the real yield of 10-year Treasury notes (bonds) is 0.72% after the value-deteriorating impact of inflation has been factored in. Should inflation increase, the real yield would likely turn flat or negative – not an encouraging prospect, but investment advisors continue to pour their clients’ capital into bonds because they’re ordered to do so, or because that’s what they’ve been educated and trained to do, or both.

Long gone are the days when a gutsy financial titan like Paul Volcker could bring Treasury yields into the double digits – or even to a reasonable 5%, for that matter. Current Federal Reserve Chairman Jerome Powell tried raising the 10-year yield to a mere 3%, and the stock market immediately vomited; now, the Fed is making it abundantly clear that they’ll be keeping bond yields super-low for several years at least.

The old-school 60%/40% allocation model is outdated and likely to produce low yield at an elevated risk in a stock bull market that’s a decade old and entirely unsupported by corporate earnings: 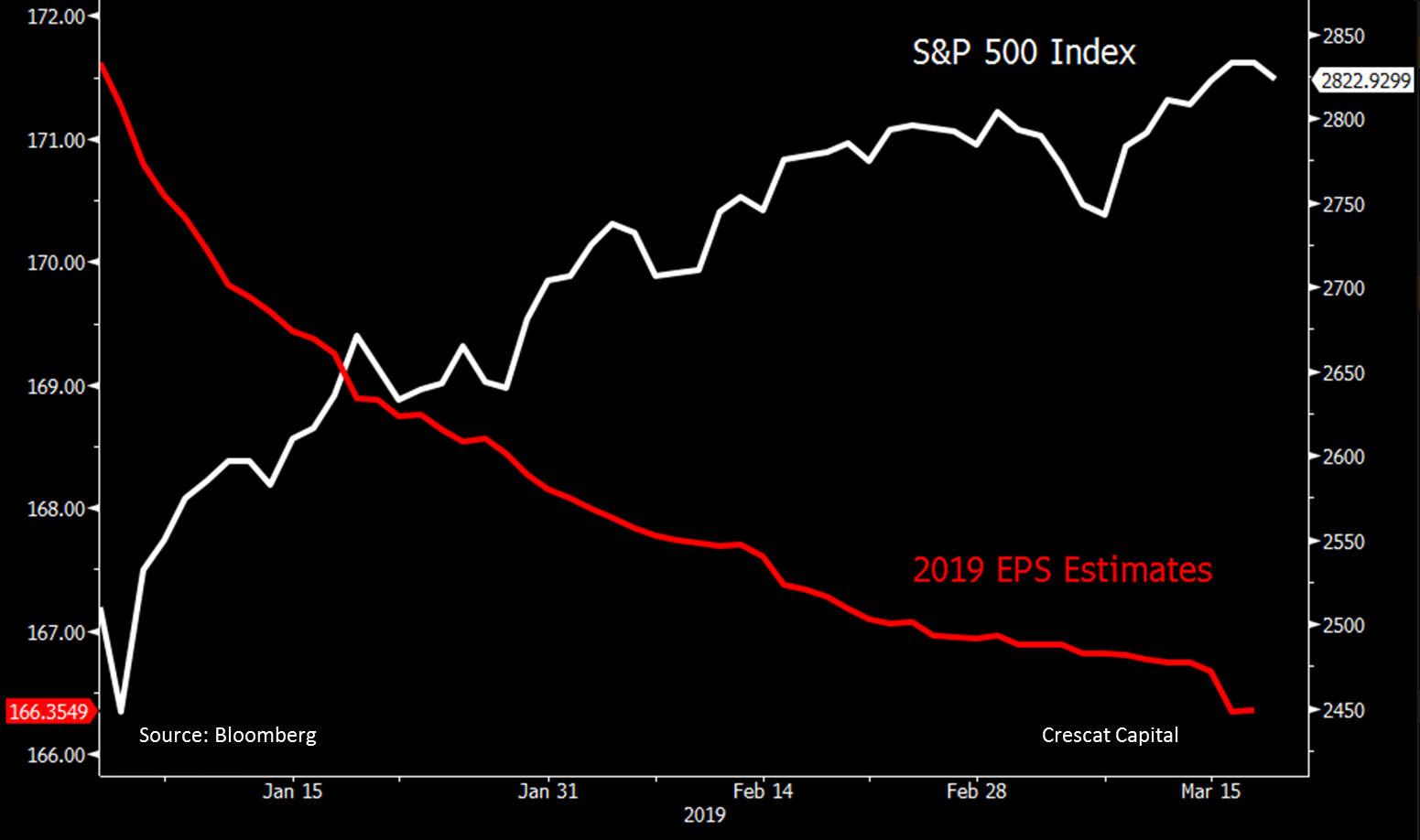 EPS (earnings per share) estimates are in the gutter, yet the market has defiantly ground higher; it’s a bizarre market environment in which companies’ earnings estimates are moving in the opposite direction of the stocks prices that are supposed to reflect the value of those companies.

Corporate earnings are the linchpin for the stock market; if the companies aren’t profitable, then the stock prices will sooner or later be revised downward to reflect that. For a stark example of this, consider all of the tech stocks with sky-high price-to-earnings ratios that crashed in 2000: only a handful of those high flyers even exist now.

Today, the major stock market indexes are almost single-handedly led by a small number of tech and Internet high flyers – sound familiar? The so-called “FAANG” stocks have been propping up the market for a while now, and they’re not exactly a bargain: Yahoo Finance currently has Amazon’s trailing 12-month P/E ratio at 88, while Netflix’s is at a whopping 136. (For reference, a price-to-earnings ratio under 25 is ideal for value-minded investors.)

On the other hand, steering clear of the investing sphere entirely isn’t much of an option, either. Keeping all of your net worth in cash in a shoebox isn’t an investing strategy: it’s living in fear, coupled with an erroneous belief that holding onto fiat currency is a safe investment for the long run.

ABC Bullion chief economist Jordan Eliseo duly notes how poor a store of value the U.S. dollar really is: “The USD, and indeed all fiat currencies, does a horrible job, with the USD having lost the better part of 95% of its purchasing power in the last 100 years, according to data from the St. Louis Federal Reserve.”

The dollar has also lost a considerable amount of its purchasing power since it was decoupled from gold by the U.S. government in 1971: 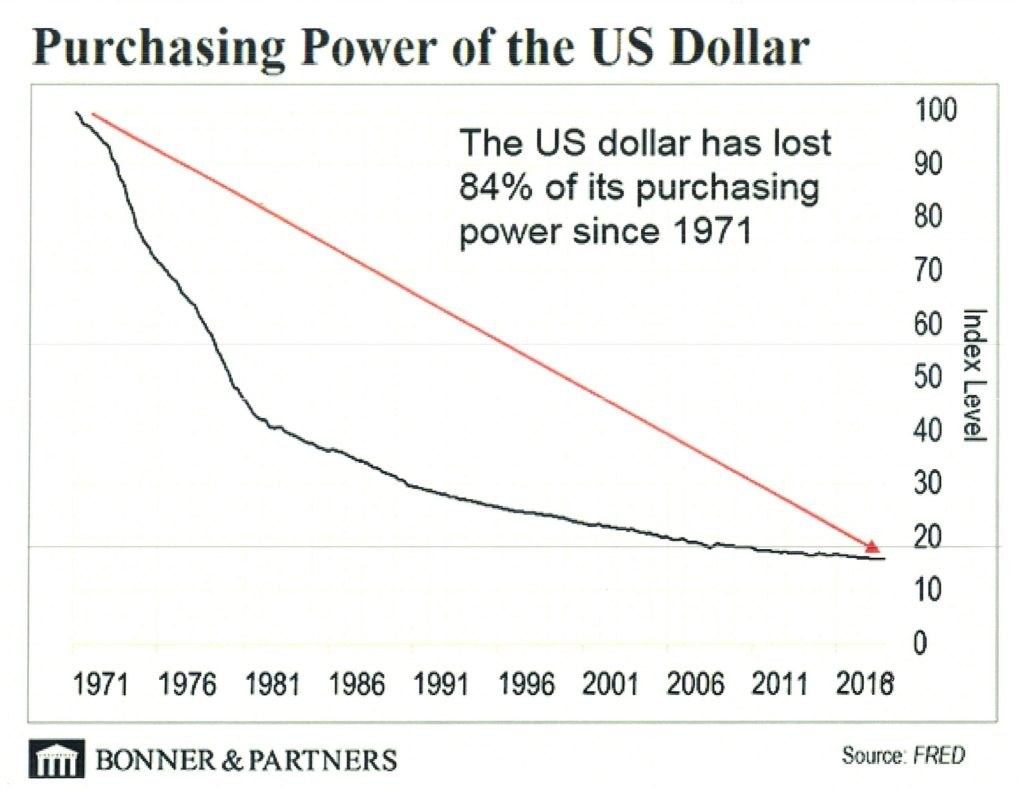 How did this happen? It’s like this: the government eliminated the requirement that its paper money be backed by, and redeemable for, gold. And once the value of the money came simply through governmental decree or “fiat,” the government now had the ability to print money as fast and as freely as it pleased.

And boy, did they have a field day with that. From infrastructure to health care to education, defense, and everything else the politicians promise to fix and finance, the “fund it now and don’t worry about how we’ll pay for it” policy has prevailed across multiple generations and presidential administrations.

Where do we stand now? Let’s look at the numbers: the U.S. national debt recently topped $22 trillion, and took only 11 months to accumulate the most recent $1 trillion as the accretive pace quickens. As for the U.S.’s deficit, it’s now projected to reach $900 billion by the end of fiscal year 2019.

This game of “kick the can down the road” can’t end well, and as investors we must position our portfolios for the eventual reckoning. No one knows exactly when it will happen: could be next month, or next year, or not for a couple of years. Either way, you don’t want to get caught up in the meltdown, which will assuredly be global in nature – when the U.S. economy sneezes, other countries catch pneumonia.

Those countries are wising up to the problem, and they’re positioning themselves accordingly by withdrawing funds from the financial markets:

… and by buying gold in record amounts. The world’s major central banks bought more gold bullion in 2018 than in any year since 1967. All told, these world governments added 651.5 tonnes (metric) of gold to their foreign exchange reserves in 2018, a 74% increase from the previous year.

Successful businessmen and investors are following suit: there are very good reasons why multibillionaire Sam Zell is buying gold for the first time in his 77 years on this planet or that Rob McEwen, the founder of Goldcorp, is calling for $2,000-per-ounce gold and even standing by his $5,000 price forecast.

With the U.S.’s national debt piling up, a slowing global economy, and a peaking U.S. dollar being just a few of the reasons to take a position in gold, my only question is: what’s stopping you? Gold is the ultimate anti-dollar, anti-inflation, anti-stock-bubble crisis hedge that’s been around for more than 6,000 years.

And unlike the stock market, gold is nowhere near the top. While the major U.S. stock market indexes waver near their all-time highs, gold has found its footing in 2019 is has an abundance of airspace to the north, with the previous high of around $1,900 a definite possibility this or next year.

But that’s not the name of the game, at least for me personally: I’m not in gold to pull short-term gains and jump ship. Rather, I’m in it for the comfort and security that a tangible, rock-solid investible form of money provides. That, then, is my message to anyone who doesn’t yet own precious metals yet: for real value that no irresponsible government can ever take away, there’s absolutely nothing as good as gold.