Countdown to the Meltdown: The Fed Basically Just Ordered You to Protect Your Portfolio

The usually deliberately vague FOMC has sent you a clear message, which you can elect to ignore only at your own peril. By taking the dot plot (which shows the various Fed members’ multi-year projections of the Fed funds rate) and shoving all the dots down, they’ve changed the economic landscape and forced investors to change their outlook and strategy going forward.

If there was any doubt that “Mister U-Turn” Jay Powell could possibly surprise the markets to the dovish side, that doubt has been thoroughly dispelled now. U.S. Treasury yields, once a safe haven for retirees, investors, and savers with a seemingly “risk-free” rate of around 5% for years, now yield less than half of that.

The Fed funds rate, which is the interest rate banks that charge each other for overnight loans of Fed-mandated reserve funds, and the rate which banks use to base all other short-term interest rates upon, was revised sharply downward by Powell and company:

Did you notice that the 2-year yield is greater than the 5-year yield? It’s not supposed to be like that: shorter-term Treasury yields aren’t supposed to be higher than longer-term yields, and inversions like this are consistently predictive of market downturns.

The major stock market indexes went into schizophrenia mode in their efforts to digest the Fed’s foray into Bizarro Land. One day there was a huge euphoric rally as the market celebrated a whole new round of quantitative easing and loose money policy; the next day, they had a major hangover, selling off sharply as the Fed’s downgraded outlook for the economy alarmed investors.

I suppose you could say that it was a “good news, bad news” type of thing, except the good news was fake news and the bad news is all too real. In a last-ditch attempt to keep the decade-long bull market party going, the Fed plans to slow its monthly Treasury reductions in May from $30 billion to $15 billion, and end to end the unwinding altogether in September. Then the Fed will become a net buyer of bonds again, eventually purchasing $20 billion worth of bonds every month, for a total of $250 billion a year. 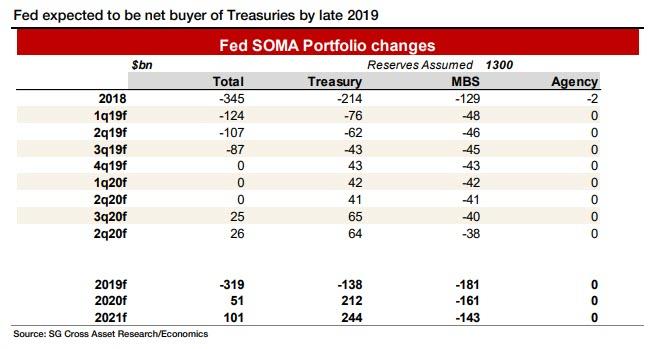 Here’s a fun fact: in his news conference, Powell used some version of the word “patient” no fewer than 10 times. And here’s a not-so-fun fact: in its post-meeting statement, the Fed committee conceded that the “growth of economic activity has slowed from its solid rate in the fourth quarter.”

That’s quite a change from January, when the FOMC said that economic activity “has been rising at a solid rate.” Furthermore, they’re admitting that the global economic slowdown is infectious:  “Now we see a situation where the European economy has slowed substantially and so has the Chinese economy, although the European economy more. Just as strong global growth was a tailwind, weaker global growth can be a headwind to our economy.”

The FOMC had also highlighted downside risks to the economy in the minutes from their January meeting, when they observed “the possibilities of a sharper-than-expected slowdown in global economic growth, particularly in China and Europe, a rapid waning of fiscal policy stimulus, or a further tightening of financial market conditions.”

And so, even while the Fed is implementing a perpetual QE program and preparing to (once again) position themselves as a full-time bonds investor, they’re telling you, me, and everybody to prepare for an economic storm of global proportions.

They’re also forcing forward-thinking investors to seek shelter due to multiple yield curve inversions. I already mentioned the inversion of the 2-year and 5-year T-notes, but the most reliable recession predictor is the inversion of the 3-month and 10-year Treasury yields, which is now in full effect: 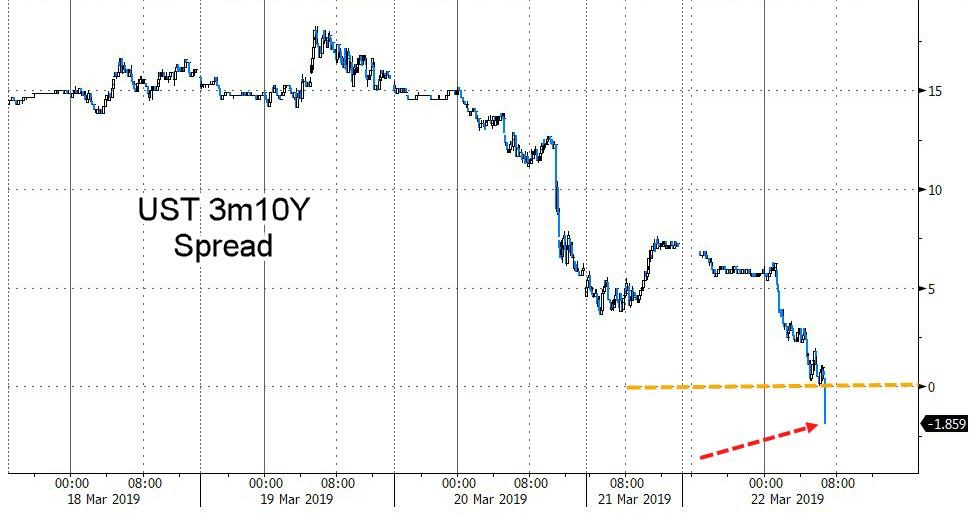 How reliable is this as a recession indicator? Put it this way: the U.S. stock market has suffered a sharp drawdown each and every time this has occurred in recent history, with the last three instances being right before the 1990 recession, just before the dot-com bubble burst, and immediately preceding the Great Recession.

And so the countdown to the meltdown begins: over the past half-century, whenever the 3-month Treasury yield exceeded that of the 10-year, an economic recession would occur an average of 311 days after the yield inversion. Thus, if history is any indication of what the future holds, we have less than a full year to seek shelter from the storm.

The implications of this are monumental and overlap economic with politics because there’s an election year coming up. The timing of the next market downturn will affect everything: can the Fed stave off recession at least through the next election cycle?

That’s the question of the year and perhaps the decade too, with so much at stake and America’s relatively prosperous way of life hanging in the balance. But what’s bad for bonds is good for precious metals, with gold versus the U.S. dollar enjoying a three-week high and renewing its general uptrend since November of last year: 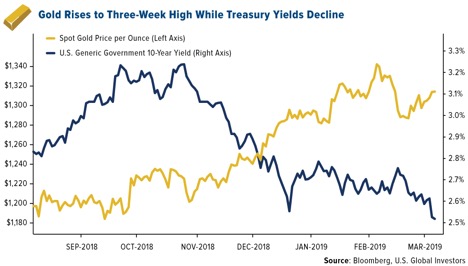 It’s a terrific time to start looking at gold if you haven’t done so already, and to renew your interest in gold if you’ve already started accumulating. Personally, I believe in acquiring physical gold as well as mining shares for some extra leverage when the big breakout happens.

I’m a fan of First Mining Gold (TSX:FF, OTC:FFMGF), which I believe is obscenely undervalued compared to the company’s peers in the gold mining space. Plus, Keith Neumeyer, the Chairman of First Mining Gold, has an outstanding track record after creating two world-class mining companies: First Quantum Minerals Ltd. (TSX:FM, OTC:FQVLF), one of the world’s largest copper producers, and First Majestic Silver Corp. (NYSE:AG, TSX:FR), one of the biggest silver producers in the world. 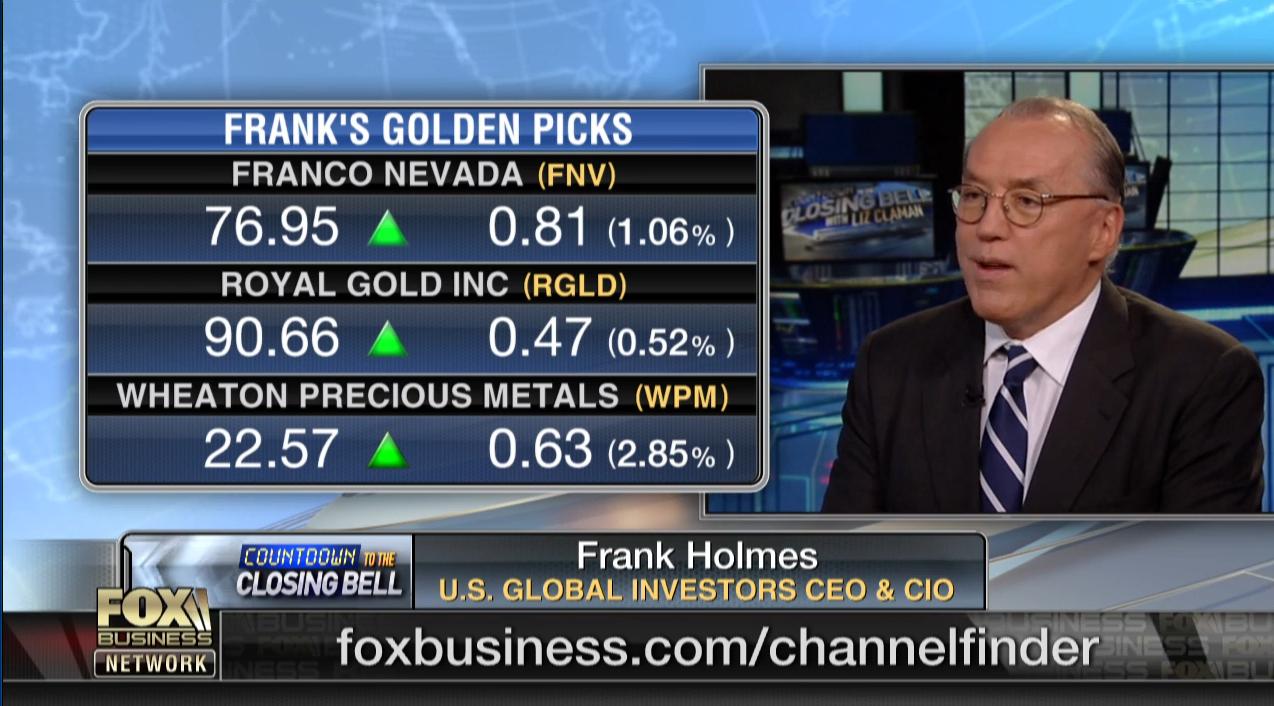 Also worth checking out is the U.S. Global Go Gold and Precious Metal Miners ETF (NYSE:GOAU), which provides investors access to companies engaged in the production of precious metals either through active (mining or production) or passive (owning royalties or production streams) means.

GOAU’s holdings include some solid companies in the mining space, with Mr. Holmes’ top three picks well represented in the fund. For diversification in metals and mining, you might consider a mix of GOAU for an ETF, FF/FFMGF for extra leverage, and physical gold for reliable portfolio protection when the global economic crisis really spirals out of control.

And it will spiral out of control – even if you don’t believe me, believe the Fed, who just gave us all fair warning of the shock waves to come.