Countries Are Buying Gold to Escape the U.S. Dollar

Gold has been enjoying a strong 2019 so far, and if anybody’s wondering if there’s still gas in the tank, all you need to do is look abroad and check the holdings of other countries. Major world powers are accumulating gold in record quantities, and dollar bulls are likely to be disappointed to learn why these countries are hoarding so much gold</strong >
2018 was truly a fluke year for the markets, as the U.S. dollar outperformed stocks and commodities globally. It was the worst year since 1901: in 117 years, the world hadn’t witnessed a calendar year ending with 93% of assets down for the year. The last time the U.S. dollar outperformed all other global asset classes else was in 1969, not long before the dollar was decoupled from gold.

Practically no one is counting on this year to be anything like last year, especially with both stocks and bonds already doing well in the first quarter. If anything, the expectation is that the U.S. dollar will revert to its typical mode of long-term decline, as the dollar’s purchasing power has eroded steadily over the past half-century.

Governments and central banks around the world are quite aware of this, and in response, they’ve been buying the ultimate anti-dollar asset, which is gold. In fact, the world’s central banks bought more gold bullion in 2018 than in any year since 1967; governments added 651.5 tonnes (metric tons) of gold to their foreign exchange reserves in 2018, a 74% increase from the previous year.
This global gold accumulation has continued unabated into 2019. Central banks around the world are increasing their gold reserves more than any time in the past 50 years; China, Russia, Turkey, Hungary, Kazakhstan, Qatar, Venezuela, Poland, Germany, France, and Italy are among the nations shoring up their gold reserves.</strong >
If we had to pick one nation as the number-one buyer of gold in the last five years, some folks would expect it to be China, but they might be surprised to learn that in terms of tonnes purchased, the blue ribbon would go to Russia: 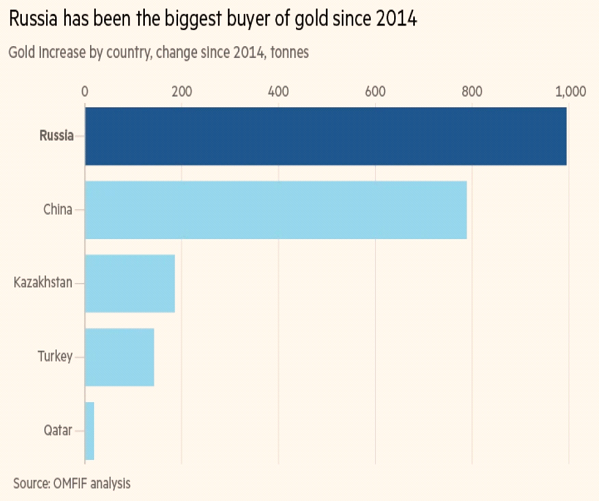 Independence from the U.S. dollar, the avoidance of sanctions from the U.S., and ongoing concerns over the health of the global economy are among the reasons that Russia has accelerated its gold-buying pace. Moreover, with bond yields in the U.S. and elsewhere under pressure this year, gold has been a particularly attractive alternative conservative investment to bonds.

In pretty much all corners of the world, central banks and governments are stocking up on gold. The World Gold Council has the stats: “Gross purchases of 48 tonnes (t) and gross sales of 13t led to global gold reserves rising by 35 tonnes on a net basis in January, with sizeable increases from 9 central banks… This is the largest January increase in gold reserves in our records (back to 2002) and illustrates the recent strength in gold accumulation.”

And now it has become a race to the top, with China making moves to challenge Russia as the number-one holder of gold. Please use the sharing tools found via the share button at the top or side of articles. The nation’s central bank, the People’s Bank of China, has purchased approximately 32 tonnes of gold during the past three month; at this rate, China could actually surpass both Russia and Kazakhstan in gold ownership: 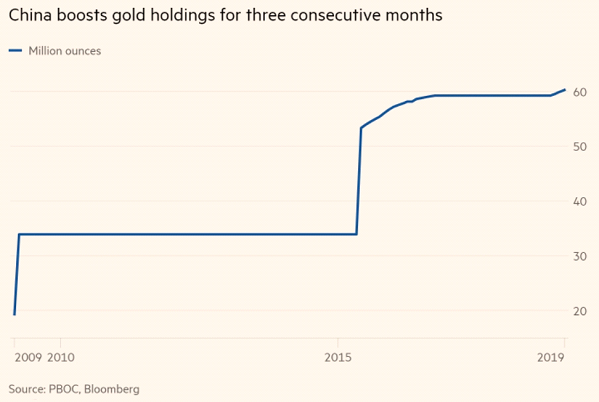 China’s central bank’s purchase of 9.95 tonnes in February folloed the addition of 11.8 tonnes in January and 9.95 tonnes in December, when the People’s Bank of China resumed its gold-buying activities after a two-year pause. This is not atypical of China, which tends to go for years at a time without reporting its gold purchases.

Now that China is reporting its gold-buying activity again, commodities analysts are preparing for the nation to ramp up its gold accumulation. As Robin Bhar, the head of metals research at Societe Generale SA, explains, “Ongoing efforts to diversify total reserves – away from the U.S. dollar – has prompted gold purchases by the People’s Bank of China, which we believe will continue.”

According to the latest reports out of China, their central bank’s total gold reserves currently stand at an astonishing 1,874 tonnes, or 60.26 million ounces. And while China is the world’s biggest gold producer, the nation’s gold reserves, at just under $80 billion, make up a mere fraction of its total foreign exchange reserves of more than $3 trillion.

What this means is that China is underweight gold compared with their peers and especially Russia: gold makes up only 3 percent share of China’s total foreign exchange reserves, compared to 19 percent for Russia. Therefore, China has plenty of room to accumulate much more gold, and at an even faster pace: 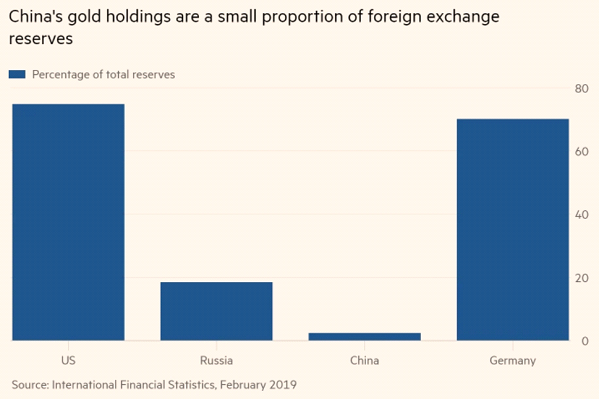 Thus, the competition is heating up between China, Russia, and other contenders to accumulate gold in preparation for global economic turbulence and as a means of declaring independence from U.S.-produced fiat money, debt, and hyperinflation. And don’t discount up-and-comers like Turkey, the world’s number-five gold consumer nation, which are also vying for the top spot in terms of gold ownership.

It’s all bullish for gold buyers, as continued accumulation by the world’s central banks could offer a “cushion” to the price of gold price this year, according to Suki Cooper, a precious metals analyst at Standard Chartered in New York. In other words, to quote a note from Singapore brokerage Phillip Futures, “Bullion’s appeal… will stand tall amidst a decelerating global economy in 2019.”

OANDA senior market analyst Jeffrey Halley, adds his note to the chorus of gold bulls, opining that “Structurally gold is well positioned to move higher over the coming months. As the world economy continues to slow and uncertainty increases, it is going to be supportive for gold.” Clearly, the whole world is turning to gold – perhaps you, as a cautious investor, might consider doing the same.