With every passing day, there’s another new reason to add some form of protection to your portfolio. Corporate earnings aren’t living up to expectations, the Federal Reserve is under mounting pressure to take liquidity out of the markets, and Russia is relentlessly pursuing its invasion of Ukraine.

The outlook for global stock market indices remains murky since Russian President Vladimir Putin is clearly undeterred by threats of punitive economic actions. Every time the media thinks something good is going to happen, Putin pulls the rug out and the markets wobble.

Bombs are now underway with a full “shock and awe” campaign commencing.

The U.S. and U.K. governments have already started to impose sanctions against Russia, and Germany is halting certification of the Nord Stream 2 pipeline that was supposed to bring badly needed natural gas from Russia directly to Europe.

All of this is bringing the one thing that investors can’t tolerate: uncertainty. Russia’s prolonged, dragged-out invasion of Ukraine is even worse than an immediate invasion would have been since it’s now a “death by a thousand cuts,” and the media is scrambling to call the bottom of the stock market correction, but Putin is making their predictions meaningless.

It might be tempting to think that since the invasion is happening halfway around the world, it won’t have any local impact. The fact is, however, that the high inflation we’ve been seeing in recent months has been driven by high energy prices – and an energy-price shock spurred by the invasion of Ukraine and sanctions against Russia could send energy prices much higher.

Moreover, it would be the worst possible timing for an energy-price spike because the markets are already anxious about an aggressive central bank pivot focused on inflation. This combination of events could further dampen the already low investor sentiment and economic growth outlook.

Yet, not every asset class is struggling amid this backdrop of fear and uncertainty. Gold, which was stuck in a range for many months and magnetized to $1,800, just recently broke out of that range while also piercing through the crucial $1,900 level, and overnight, with the invasion of Ukraine gold shot to a 15-month high. 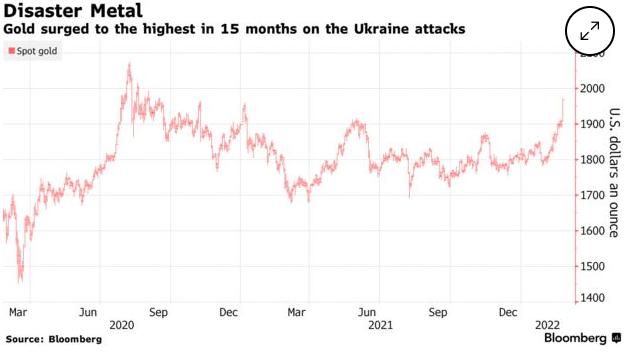 Other commodities have already had their breakout moments and have even gone parabolic: lumber, oil, natural gas, and uranium are all expensive now. We alerted our readers ahead of time that gold would play catch-up with the other commodities, and now it’s happening.

If you don’t have a position yet or want to add one, no worries – this is just the start of something much bigger. From a technical standpoint, higher lows and higher highs in gold, along with the breakout from the established range, indicate that gold’s bull run is just getting underway.

This isn’t even about Russia and Ukraine, though gold’s relative outperformance compared to the major stock market indices during this crisis has demonstrated gold’s enduring value as a crisis hedge.

The real headline story here is that gold’s path to higher prices will be paved with the trillions of dollars printed by the U.S. government, particularly since the onset of the COVID-19 pandemic.

That event gave the government a perfect excuse to print and spend money without considering the consequences. Alarmingly, 80% of all cash that’s ever been printed in the U.S. was printed in the past 18 months.

7.5% annualized inflation has hit the U.S. consumer hard and might have been a complete surprise to the mainstream media, but we’ve been issuing warnings since COVID-19 started. Even the Fed had to acknowledge that inflation isn’t “transitory” and the 2% target has no relevance now.

Due to the recent confluence of events, it might look like the Russia-Ukraine conflict is the reason for gold’s breakout. To find the real catalyst, though, just look at the inflation rate, which signals trouble for the economy but a new secular bull market for gold.