Day of Reckoning Coming: Time to Future-Proof Your Portfolio!

It doesn’t get any clearer than this. As Big Tech stocks march to new highs day after day, Wells Fargo Securities’ Chris Harvey is warning that a “day of reckoning” is ahead.

This isn’t Harvey’s first call for caution. In April, he called the March rebound in Big Tech a “head fake.” Now, Harvey is doubling down on his risk-off outlook and signaling more concern even as the Nasdaq continues to rally.

In defense of his position, the analyst cited elevated valuations, saying, “The premium that you’re paying is still exceptionally high… We believe that premium has got to compress.”

Of course, Harvey isn’t the only one sounding the alarm. Other well-regarded financial experts have issued similar warnings:

Stanley Druckenmiller: “I have no doubt that we are in a raging mania in all assets… “I will be surprised if we’re not out of the stock market by the end of the year, just because the bubbles can’t last that long.”
Jeffrey Gundlach: “We’ll have a tremendous unwind of a lot of the money that thinks that the stock market is a one-way thing.”
Kevin O’Leary: “The generation that is trading right now has never gone through a sustained correction. It’s coming…”
Michael “The Big Short” Burry: “People always ask me what is going on in the markets… It is simple. Greatest Speculative Bubble of All Time in All Things. By two orders of magnitude.”
Jeremy Grantham: “When you have reached this level of obvious super-enthusiasm, the bubble has always, without exception, broken in the next few months, not a few years.”
Leon Cooperman: “Everything I look at would suggest caution, intermediate to long term, would be the rule of the day.”
Robert “Rich Dad, Poor Dad” Kiyosaki: “Biggest bubble in world history getting bigger… Biggest crash in world history coming.”
Gary Shilling: “At some point, boy, there’s going to be a lot of blood on the floor.”

These quotes could be applied to the S&P 500 or the Dow Jones, but the Nasdaq’s stretched valuation is particularly apparent. Whenever it goes far above its 50-day moving average (as it’s doing now), it always snaps back to the line sooner or later.

For Harvey, technology stock prices simply aren’t justified by corporate growth. “The tech companies and the growth companies that are selling at very high multiples… Even though they have high growth rates, the high multiples are what’s going to do them in,” he explained.

Beyond the valuation concerns, Harvey points to inevitably rising interest rates as a likely catalyst for the next bear market in the Nasdaq.

Specifically, Harvey believes that the next 25-basis-point move in the 10-year Treasury Note yield will be to the upside, not the downside.

As for the timing of the upcoming correction, Harvey expects that rising interest rates will set the stage for a double-digit pullback in momentum growth stocks – and he predicts that this could happen later this summer or early in the fall. 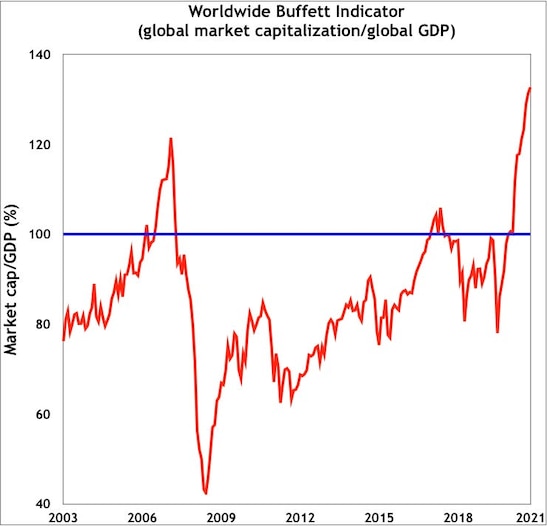 In case you need further evidence, you can always check Warren Buffett’s favorite indicator, which calculates the market cap of the entire stock market (via the Wilshire 5000) divided by the global GDP.

Currently, the reading on this indicator is higher than it was in 2008, right before the financial crisis and the Great Recession.

The tough part is trying to time the next stock market downturn, down to the exact week or day. History shows us, though, that it’s awfully difficult to seek out self-protection once the collapse is in motion.

And when it happens, it’s the most overvalued stocks that tend to fall the furthest. Until that happens, feel free to continue playing the game of musical chairs – and pray that you’re not in trouble when the music stops.