Inflation is getting hot and mainstream. While we live in a backwards world, I’m almost tempted to anticipate extreme deflation while the mainstream is talking rising prices as if we’re watching some live riddle play out. But in reality, I’ve been expecting this for a while now and this has just been a constant ramp up.

As it stands officially, U.S. producer prices rose 9.7% in January compared to a year ago. But is that even the whole story? The reality is inflation is causing businesses to close, families to sacrifice, and burden the pessimism of the future if they aren’t managing their emotions in an orderly way.
And the fact is, inflation is much higher than that.

And now the billboards of inflation across the country are the gas prices that are on a hockey stick pace upwards.

If you have to rent a house you know rents are up massively and homes are as well if you have to go out and purchase something on the open market.

Apartments in Fort Meyers Florida that were renting for $800 in 2019 are now going for $1,450-$1,500 just 3 years later. And that’s not an anomaly. This is main street and reported inflation is failing to capture what is really going on.

And lets not forget the political chaos that’s weighing on the economy and now the aggressions that are being felt around the world, that are all arguably linked indirectly. When you have a series of negative momentum, the ripple effects are felt far and wide.

And if inflation is on your mind, then you should also be thinking about precious metals. The cause-and-effect relationship between dollar inflation and higher commodities prices was demonstrated in the 1970’s, and we’re seeing the same conditions in 2021.

Gold touched $2,000 in August of 2020, and now we have gold OVER $2,000 once again, getting as high as $2,060 as of this publication, along with silver making its DELAYED move. $30 resistance level will be huge and most likely much higher from there.

There are numerous catalysts aligning to lift gold and silver prices: government money printing and the dollar’s inevitable devaluation, central banks hoarding gold, hedge funds loading up on gold as a crisis-risk hedge, the commodities boom in the wake of Covid-19 – the list goes on and on.

Prominent forecasters are well aware of these catalysts, and are adjusting their price predictions upwards.

For instance, the global investment bank Goldman Sachs recently issued a 12-month target price of $2,300 per ounce for gold. In a note, the Goldman analysts cited inflation concerns following the Covid-19 crisis as a key driver for a higher price of gold. The bank’s analysts expect inflation in the United States to rise to 3% – though of course, we all know it could go higher than that.

Meanwhile, Commonwealth Bank of Australia’s Vivek Dhar expects that gold prices could surge beyond $2,500 an ounce. The “key story” here, according to Dhar, is an increase in 10-year inflation expectations. Understanding this “is really the key to unlocking whether this rally has more legs to run,” he added. 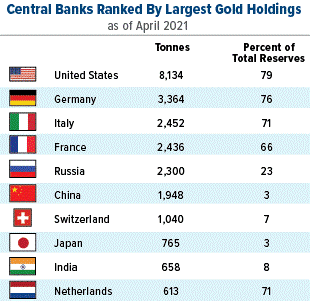 At the same time, Bank of America analysts published a report titled “The Fed Can’t Print Gold” and targeted a gold price of $3,000 in 18 months’ time.

According to the Bank of America analysts, interest rates in the United States as well of the rest of the world are expected to stay very low for a long time.

And with that, government spending, deficits and central banks’ balance sheets are predicted to increase significantly. In the final analysis, the demand from investors is expected to drive the gold price considerably higher.

Yet another bullish call comes from RBC Global Markets analysts, who are also modeling a $3,000 scenario for the gold price.

“Steps to get there and early warning signs to watch out for would include ever more aggressive fiscal and monetary policy moves, another and more exaggerated spike in infection rates, and an unexpected geopolitical event sparking a new widespread economic concern,” cited the RBC Global Markets analysts.
Turning to silver, the catalysts also include dollar inflation and silver’s value as a crisis hedge, but we can also add silver’s industrial uses, including its use in electric vehicle batteries and solar panels.
Bank of America analyst Michael Widmer revealed his expectation that silver will push above $31 an ounce, citing that silver is BoA’s “preferred play on rising investment in solar panels.”

Moreover, Canadian Bank CIBC analyst Anita Soni issued a forecast of $32-per-ounce silver in 2021. With that, Soni asserted that silver “has the potential to provide investors with even more torque given the relatively smaller market for silver versus gold.”

As I see it, there will be plenty of “torque” in both gold and silver as multiple catalysts converge at the same time this year – and as the smart money inevitably loads up on hard assets in advance.